Bring Me the Head of Earl J. Woods 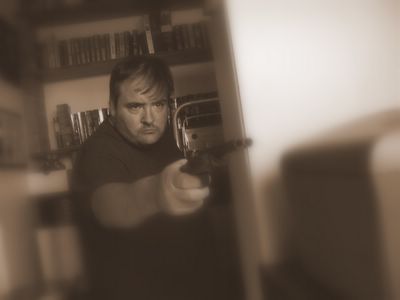 Over the weekend, Colin, Mike, Pete and I went over to Jeff's place to watch some movies. First, we watched Appleseed, a beautiful but somewhat sterile anime; then, Star Wars; and then...Bring Me the Head of Alfredo Garcia.

One of these things is not like the others...

I brought it over, because a), the awesome title, and b), it was directed by Sam Peckinpah, director of The Wild Bunch, perhaps the last great western until Clint Eastwood revived the genre with Unforgiven. (Peckinpah also directed Convoy, a byproduct of the CB radio craze of the late 70s, but nobody's perfect.)

The film's pace is...somewhat slower than modern audiences are accustomed to. In fact, it's fair to say that the film consists of many scenes of the bartender and his girlfriend talking (with many pauses) and driving along dusty Mexican roads, punctuated by the occasional gunfight. At one point Kris Kristofferson, playing a biker, attempts to rape the protagonist's girlfriend, and even that scene is so measured and laid back that Pete exclaimed, "Jesus Christ! They can't even make a rape dramatic!"

It's a fair criticism, and we started skimming the film at about the halfway point, watching the final scene only to see how it ended. But I watched the film properly yesterday, front to back, and I discovered that even though the film is far from Peckinpah's best, it does have something important to say about violence. At one point the protagonist, a bartender who digs up Alfredo Garcia's head for the promise of a ten thousand dollar cash payout, demands to know why the head is so important.

"Sixteen people have died for this," he screams, genuinely anguished, even though some of those people were thugs who were trying to kill him. And later on, when he has the chance to take home a cool million for the head, he turns down the money and metes out brutal justice instead...and then, at the last minute, goes back for the money, and of course is gunned down in the end.

The irony is this: Alfredo's head was wanted so badly because he impregnated, out of wedlock, the daughter of a rich Mexican crime boss. The mobster wants him Garcia killed, but Garcia dies in a car accident before a single bounty hunter can collect. Of course the mobster isn't told this, and the bloodbath over the corpse ensues, and twenty five people die for nothing by the film's end. The bartender loses his girlfriend, his self-respect, and his life, all for the prospect of a lousy ten thousand dollars...and even when that reward climbs to a million, he hardly seems to care, and indeed seems pretty fatalistic about his prospects when he takes the cash.

What I find interesting is that Peckinpah, who's been called a fascist, a misogynist, and a glorifier of violence, made such a point of showing how stupid the whole affair is. The lone voice of reason, the bartender's sympathetic prostitute girlfriend, is dragged along for the ride, trying to talk her man out of his folly, but of course she fails and dies at the hands of rival bounty hunters. We aren't shown how she's killed; it happens off camera, which is unusual for Peckinpah, who has been criticized for his depictions of casual violence against women. (Watch Straw Dogs for perhaps the most horriflying example, and even in Alfredo Garcia, women are slapped around for the most minor of offences - one is even knocked unconscious for no reason at all.) The prostitute even appears somewhat saintly in her shallow grave, which is appropriate since she's the only sympathetic character in the movie.

The film ends, as several Peckinpah films do, with a massacre that leaves scores of dead, the good, the bad and the innocent alike; the final image is that of a machine gun barrel, blasting away at the audience, perhaps Peckinpah's not-so-subtle critique of his fans, who come, after all, for the bloodshed. (I don't excuse myself from this crowd; violence may be the lazy writer's most versatile and dependable tool, but there's a reason for that: it's exciting.)

I have to wonder what Peckinpah would think of today's hyperviolent films, in which scores of people are blasted to atoms by aliens, crushed beneath tidal waves, or obliterated by unstoppable serial killers from beyond the grave, without a single thought given to the lives of the disposable characters. At least Peckinpah's sacrificial lambs usually had a bit of backstory, even if it consisted of only a costume choice or a single line of dialogue, to make us care about the characters as human beings, rather than meat for a cinematic abbatoir.

I'm not trying to excuse Bring Me the Head of Alfredo Garcia - it's not a great film, or even a good one - but I think it is important as part of Peckinpah's body of work, and unlike many of today's exploitation pictures, it at least tries to make the viewer think a little. The 70s were good for that. 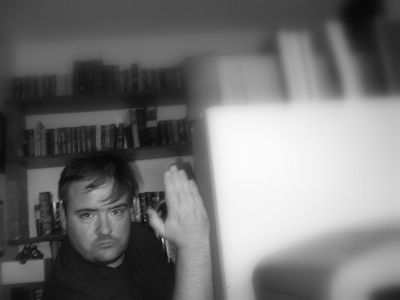 Wow. That made me think of the original Ghost Rider. Hey, you're THE Ghost Writer.

Those pictures are fantastic.

Thanks, guys. Credit for the photos must actually go to Sylvia, who shot them, and the program Picasa 2, which I used to create the soft focus and sepia effects.

I don't know what the photos had to do with the commentary on the movie but they go with the title of the post very well.

You look like a desperate man on the lam.

No wonder syllabi are begging for some Earl-time.