SPOILERS AHEAD for the season two premiere of Star Trek: Picard 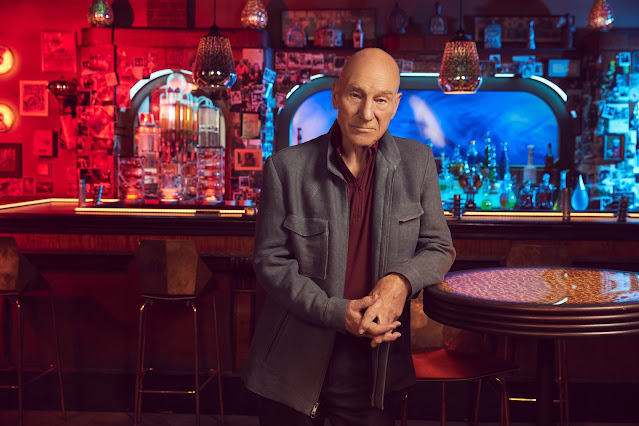 Season two of Star Trek: Picard begins with "The Star Gazer," a surprisingly well-constructed and thematically cohesive premiere. There's a compelling flash-forward teaser that puts the crew in exciting jeopardy, followed by a more thoughtful exploration of Picard's emotional journey as he closes in on being a century old. Laris is back from season one, and very welcome she is as she pushes Picard to explore something other than outer space--his need for love and companionship. But Picard is still Picard, and though sorely tempted, he can't manage to break through his own emotional barriers. But to his credit, he realizes Laris is right--he's missing something, and he seeks the counsel of his old friend Guinan, now tending bar in 10 Forward--a terrestrial 10 Forward, that is, in 25th-century Los Angeles. It's fan service to be sure, but it offers a sensitive and thoughtful conversation about Picard's fears and weaknesses. Both Patrick Stewart and Whoopi Goldberg are great here, and clearly still in control of their characters. And the 10 Forward set is absolutely gorgeous; it's spacious and completely believable as a bar, but with little touches of the future.

Meanwhile, we take a quick tour of the quadrant to check in on the other lead characters: first, Jurati and Soji. Much to my delight, Dr. Jurati's murder of Maddox in season one is addressed, removing a huge plot and worldbuilding oversight from that initial season. Her characterization here is better than last year too; she's a bit more seasoned, a bit more vulnerable, clearly feeling some remorse and a little less sure of herself than in her first appearances. Synthetic being Soji is at peace with herself among her people, and she and Jurati clearly have a friendly relationship, demonstrate efficiently through dialogue and acting choices. Here too, the production design is amazing; the Jurati and Soji's scene takes place on a planet in the Beta Quadrant, and they're having a dinner party in a very luxurious indoor-outdoor patio with a stunning pool feature.

Seven of Nine is out doing her thing, defending far-flung colonists from space pirates, when she runs into Captain Rios, now a Starfleet officer again, and commanding the new USS Stargazer, the namesake of Picard's first command. Characterizations are again on point here, as is the production design; the Stargazer is a thing of beauty inside and out, sporting a modernized version of the four-nacelle design fans will remember from Star  Trek: The Next Generation.

Picard is on Earth saying goodbye to other cast members from season one: After a nicely-done speech to Starfleet Academy, he sees young Romulan Elnor off on his first starship assignment, while his former adjutant, Raffi Musiker, back in Starfleet's good graces, takes command of the USS Excelsior. It's nice to these characters progress; Elnor, though seen only briefly, is more relaxed and at peace with himself, while Raffi clearly has her mojo back after her troubles in season one. The Starfleet facilities are, again, stunning, a great showcase for Star Trek's utopian vision.

The main plot begins as the Stargazer is sent to investigate that great Star Trek trope, the mysterious space anomaly. Turns out it's broadcasting a plea for help--specifically for Jean-Luc Picard. Picard, of course, interrupts his self-reflections immediately to answer the call of duty, and what follows is not what anyone expected--including me, and it was nice to be taken by surprise. One element of the incident at the anomaly was poorly staged, making Picard look indecisive when clearly the audience wasn't supposed to take it that way; they should have taken one more pass in the editing room for this sequence.

The episode ends with a big bang followed by a compelling denouement that ties back to themes from the series finale of Star Trek: The Next Generation and sets out the story arc for this season--a story arc that was somewhat outlined in the trailers for this season, but that I now believe (and hope) may be somewhat more interesting than those trailers suggested.

Oh - there's also a great scene of young Picard with his mother, one that reveals a painful family secret that provides critical context for Picard's emotional journey through the series and this season.

All in all, a strong opener for what I hope will be a more consistently good season than we were offered in season one.