The Maltese Brain Served Up on a Silver Platter 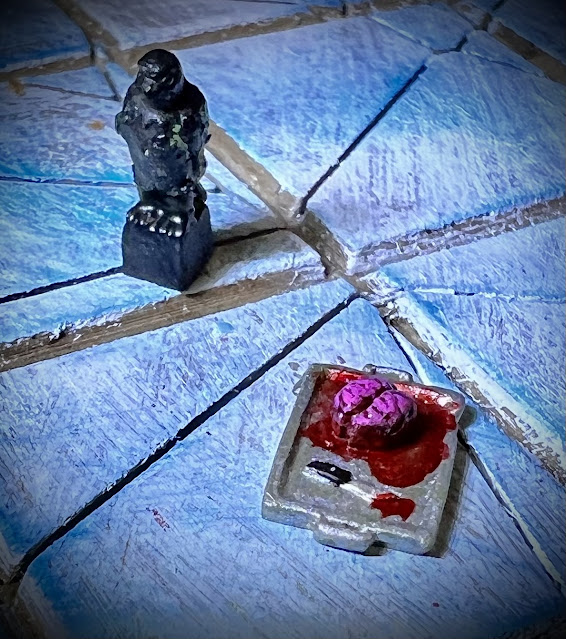 Here are 28mm scale models of the Maltese Falcon and the criminal brain used to create Frankenstein's monster. I agonized over how to paint the Falcon so as to reveal the details of its surface, but then I watched a clip of the film and realized that yep, it's just black, and you see detail because of the light reflecting across its contours. So I just painted it black.

The road to Castle Frankenstein wasn't exactly paved with gold, Sam Spade thought. In fact, it wasn't paved at all, except maybe with the blood and sweat of the poor peasant saps of the village that sat below and apart from the tall stone towers of the castle. That road now had a little extra paving in the form of Spade's blood and sweat, though not his tears - never his tears.

Spade's right hand was clenched tightly around his Colt M1911A1 as he kicked open the door to Victor Frankenstein's lab.

"Freeze, you butcher!" Spade cried. A stout hunchback carrying a silver tray yelped in surprise, and in his shock the hunchback's spastic motions launched the tray's contents - a bloody scalpel and a disembodied human brain - into the air.

"You fool!" shouted Frankenstein, his mad eyes wide with anguish. The scalpel clattered harmlessly across the stone floor into a dark corner, while the brain plopped to the floor and was smushed by the impact.

Spade's lips twisted in disgust as he eyed the broken, oozing brain. Horrified, the hunchback made his escape, dashing for the staircase to the lower levels as his master kneeled and scooped up the remains of the brain in hands wrapped up with black lambskin gloves.

As Frankenstein lamented, Spade took a precious moment to assess the scene. The centrepiece of the laboratory was a human shape on a metal slab, a shape covered by a white sheet. The slab was attached to chains on a pulley system that seemed to suggest the corpus could be raised to the ceiling. But for what purpose?

"Say, what is this screwy business?" Spade asked.

Tears streaming down his cheeks, Frankenstein offered up the smashed brains, chunks leaking between his fingers.

"The stuff that dreams are made of," Frankenstein whispered.

"Well, sweet dreams to you, sweetheart. Here's a love letter from Miles Archer," Spade said, aiming his Colt, squeezing the trigger, and plugging Frankenstein between the eyes with lead hot as hell.