Heading southeast from Tok, he arrived at a crossroads. He could continue to Port Alcan, and return to the Yukon the same way he'd left, or he could turn left and take the Top of the World Highway to Dawson City.

Given his demons, it wasn't really much of a choice at all. Dawson City meant Jack London and Robert Service, the Klondike, the Old West, a thousand beloved tropes. He imagined swinging saloon doors and freshly-painted boardwalks, riverboats and grizzled miners, Mounties and old-fashioned general stores. It was a chance to travel back in time to an era he'd romanticized since childhood. He couldn't come this far and miss what might be a once-in-a-lifetime chance.

He turned left, and sealed his fate.

At first, he was surprised by the road's quality. Though winding in all dimensions, the asphalt was smooth and fresh, salmon-pink in sections, a colour he'd never before associated with roads. The road was well-named; it seemed to climb inexorably to the heavens, the valleys and chasms below growing ever distant. The lack of guardrails inspired intense caution; he kept his eyes on the road, though the beauty of the perpetual sunset was compelling. He would stop for pictures, he promised himself, when he crossed the border. 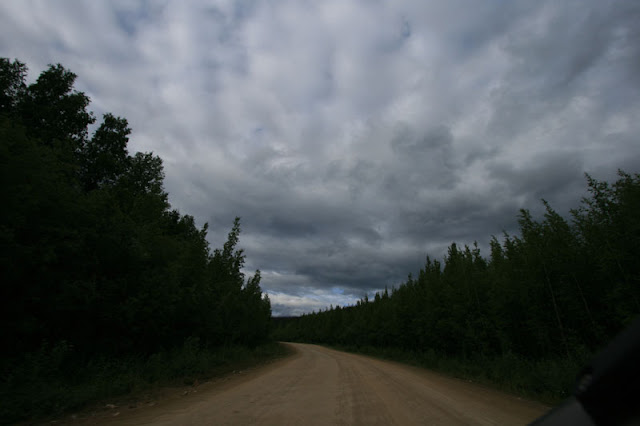 But after an hour or so of smooth driving, the road abruptly disintegrated, flat asphalt giving way to rough, broken gravel. The lane narrowed dangerously, the curves tightened, vision was impaired by the towering trees and sharp-angled corners. 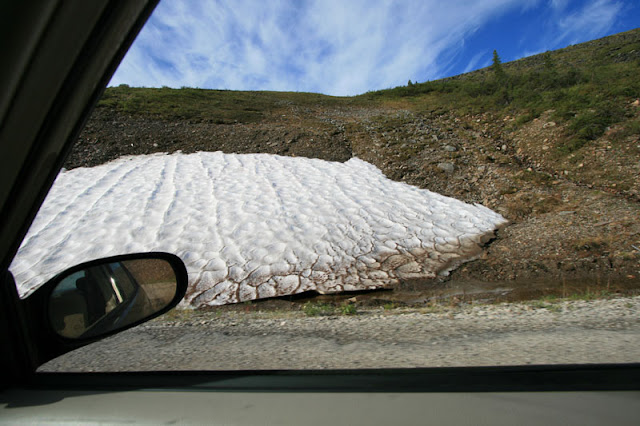 He was high enough that even in July there still remained patches of snow, stubbornly clinging to life; even the constant sun couldn't force them to relinquish their icy grip on these lonely peaks. 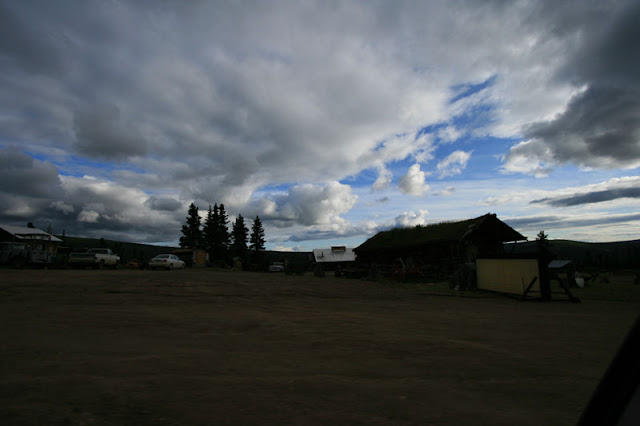 Tiny communities of single-digit populations hugged the highway, offering little but gasoline and small talk, and sometimes not even that. He marvelled at the ability of these hardy souls to endure such isolation. The roads here were so rough and crumbling that he was forced to a crawl, inching forward at 20 or 30 kilometres per hour, half-expecting a head-on collision at every blind corner. It was like walking along the window ledges on the 100th floor of a metropolitan skyscraper; there was absolutely no room for error. 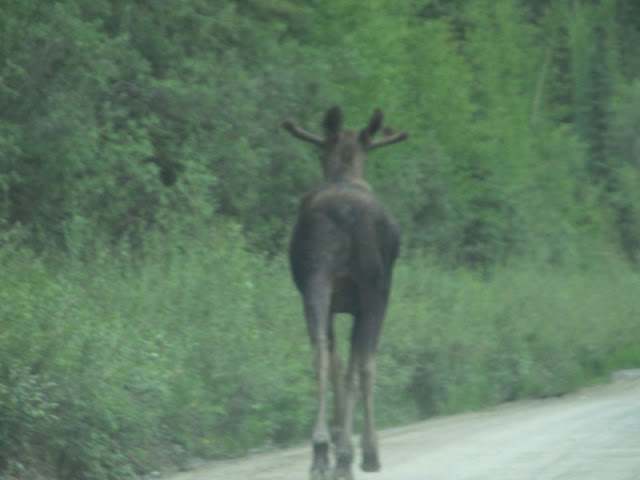 Fortunately, he surprised no unwary drivers around those dangerous curves. But he did startle a moose, which galloped off in high dudgeon, leaping back into the forest before he could do more than snap one blurry photo. 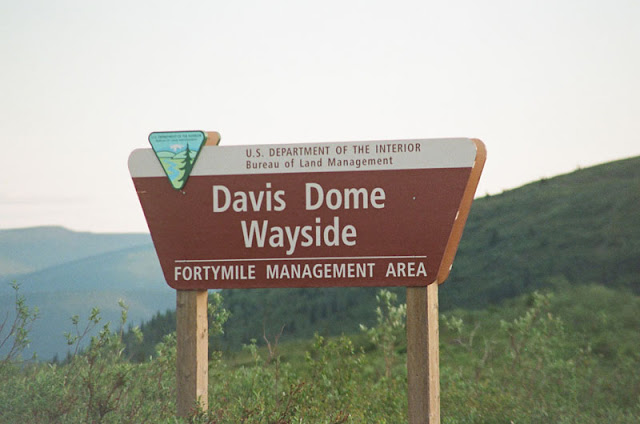 Finally, around 9 pm, he reached the border...only to find that it had closed for the night. He was stunned and annoyed at first, hardly believing that a border crossing could simply shut down. And he couldn't just sleep, not with the sun blazing down the whole time. He couldn't even phone Sylvia; he'd left cell phone coverage behind hours ago. He'd be stuck here for hours, with nothing to do. 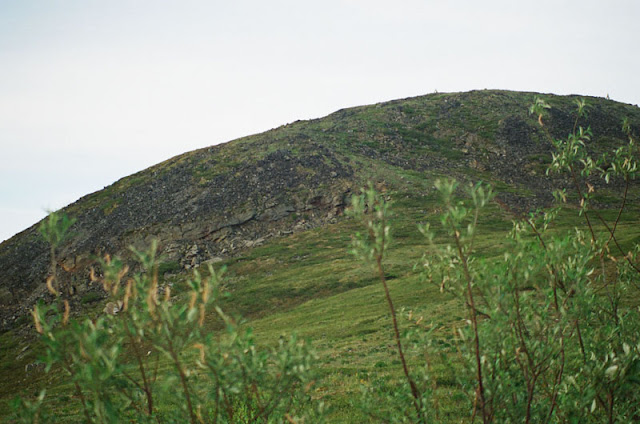 And then it hit home. This was what he'd wanted all along: some peace and quiet, some solitude, an escape from phone calls and emails and news coverage. For half a day, he thought, he'd have nothing to do but watch and think and enjoy the silence at the top of the world. 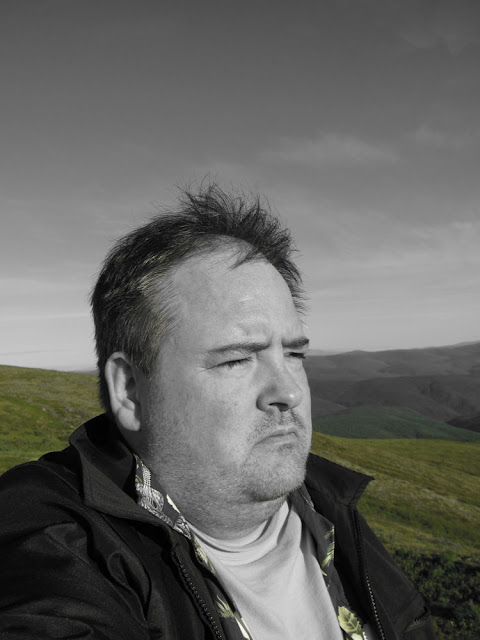 He joined a small group of similarly stranded travellers, and they shared some good-natured grumbling. Some Alaskans emigrating to Kentucky brought him over a delicious heaping of ravioli, served up on a paper plate with a plastic spoon. For a while they discussed politics and popular culture, and then each moved on to his or her own corners, leaving him alone to gaze at the sky. For hours he simply stood and stared, watching birds flit back and forth, the clouds roll serenely overhead, the sun slowly graze the mountains, barely kissing them, holding back the night. 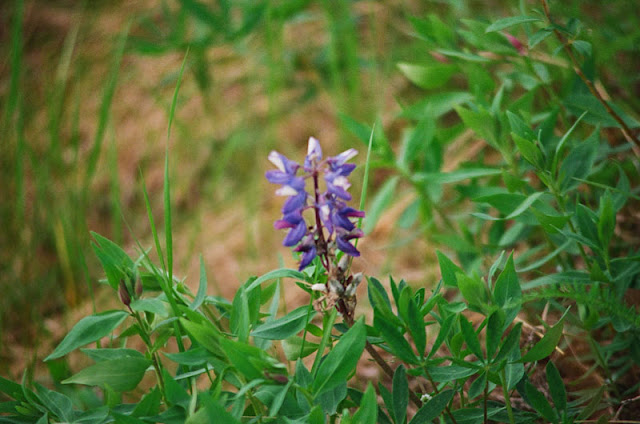 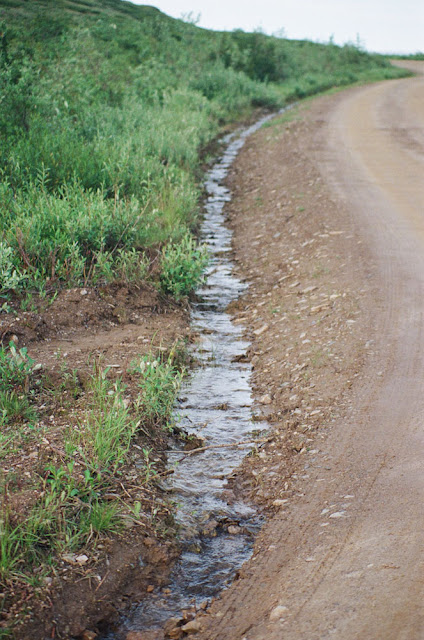 He explored a little, stumbling across a tiny creek. The only sound was the sound of water trickling over the polished stones, and suddenly he was delighted that he'd missed the crossing. This is why we're here, he thought; to enjoy the marvels of nature, to wonder at the grand machinations of nature and science, to contemplate ourselves and the beauty of our surroundings. 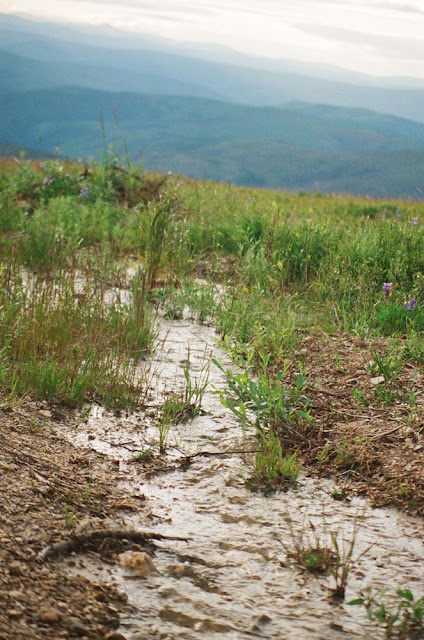 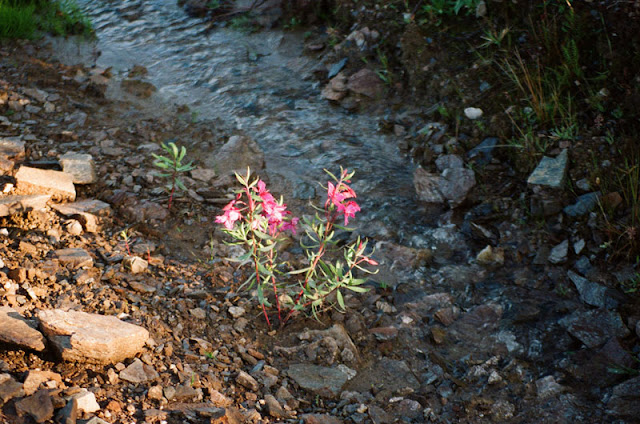 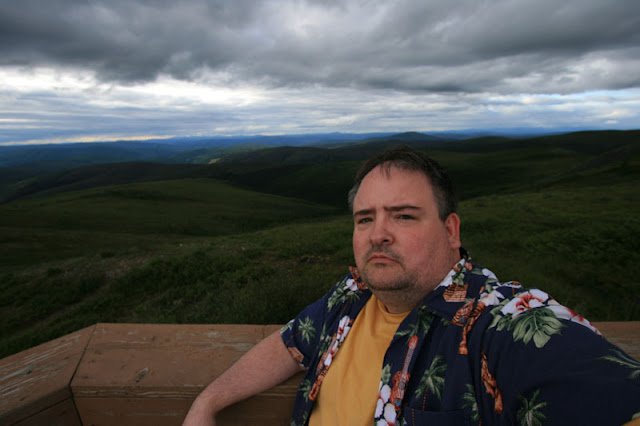 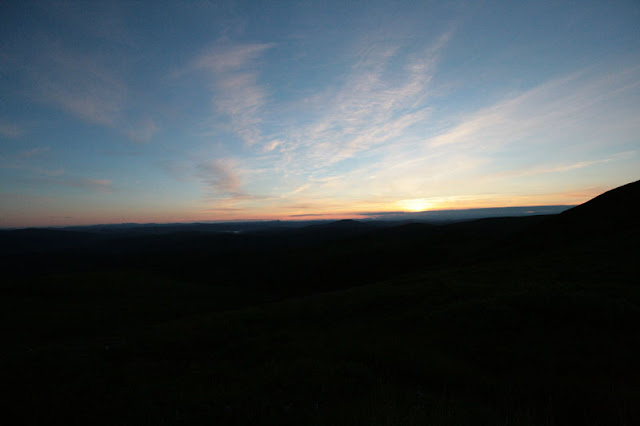 For a long time he was lost in thought. He wondered how, in the face of all this serenity, he allowed himself to stress himself nearly to death over politics he couldn't hope to change alone. But after a while he realized that what he did was important; his very presence here was possible only because he enjoyed sufficient prosperity to make the journey. Many, many thousands in his home province weren't so fortunate. The most vulnerable struggled to buy groceries.

Did he deserve this indulgence, he wondered? Perhaps not. But he needed it, and when the border opened up again some time later, he drove on, renewed. The sensation would be fleeting.

The road steadily improved as he made his way to Dawson City, and then he spotted it, wonder of wonders: 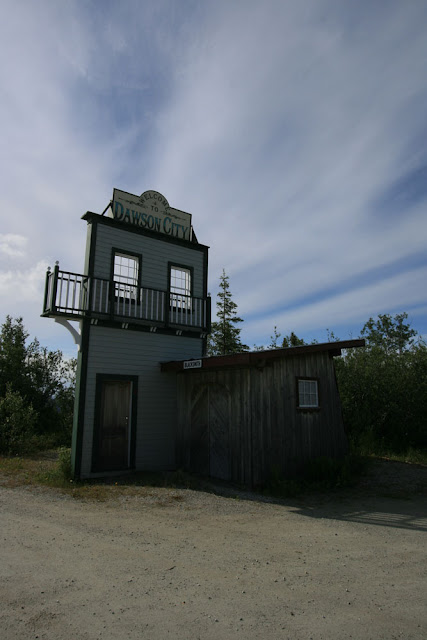 A two-dimensional false street - just like they sometimes used in the movies! The doors led nowhere, the balcony couldn't be climbed; it was merely a fancy road sign. He wished he owned an original Star Trek costume so that he could pose in front of the faux tableaux, pretending he was an extra in "Spectre of the Gun." 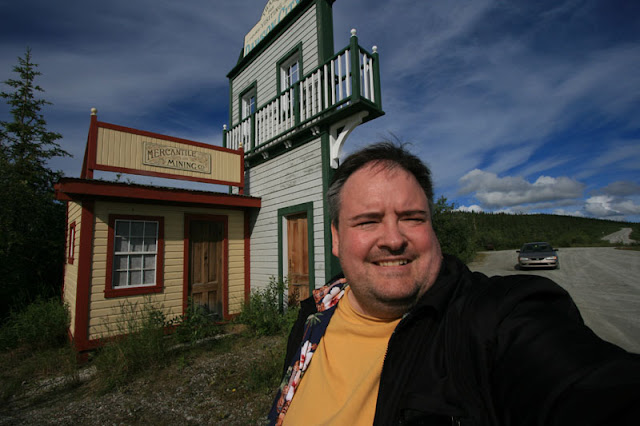 That image alone would be worth a return trip, he thought; perhaps after losing 80 pounds or so... 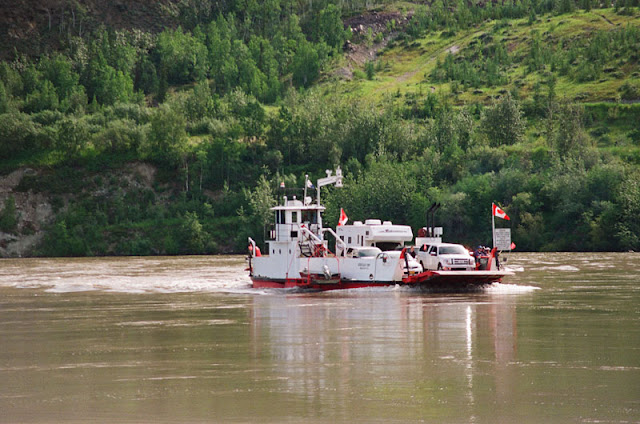 For a wonder, he arrived just in time to catch the ferry across the Yukon River. As soon as he stopped on the riverbank, waiting for the ferry to make landing, he turned on his cell phone to call Sylvia. He knew that she must be worried, for it had been over sixteen hours since he'd last called, back in Tok. But the phone glumly pronounced "No Service," which made no sense to him; Dawson City was pretty far north, yes, but it was one of Yukon's largest population centres. Surely they had cell phone service...? Well, no matter; he'd phone as soon as he found a hotel room. There would be land lines. 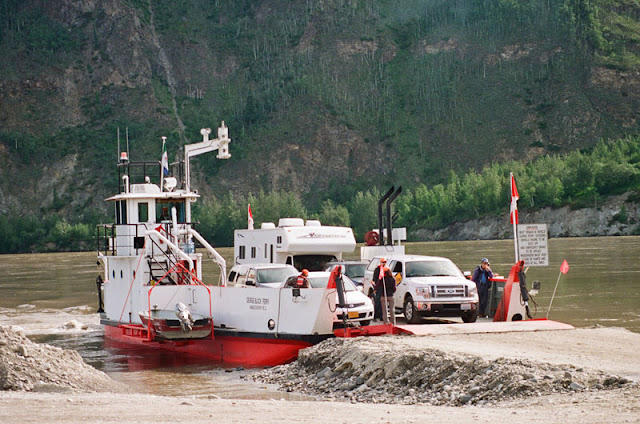 The Yukon was perhaps the most beautiful river he'd ever seen, carving its way through the mountains with tremendous power. It was a pleasure just to watch the waves roll by, heading for the Bering Strait, ancient roadway to the continent's indigenous peoples. What must it have been like, he wondered, to explore this place in the old times before modern civilization, via raft or canoe? Hard but marvellous, he decided. 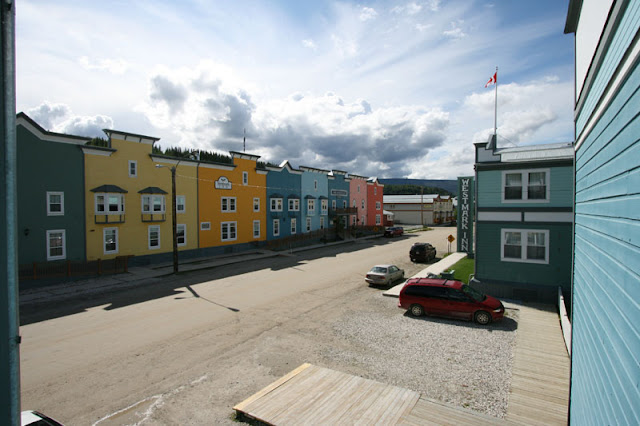 The architecture was everything he'd hoped for, with a movie-western feel inside and out in practically every building. He found lodging at the Westmark Inn and asked about cellular reception, only to discover that something had severed the main connection to Whitehorse. Not only was there no celluar service, there was no communication at all: no telephone connections, no television, no debit card or credit card machines. Unless you had a satellite phone, you were out of luck.

He worried about Sylvia; she would almost certainly think that he'd crashed the car or been eaten by a bear. But what could he do? He certainly couldn't drive to Whitehorse, not after skipping a night's sleep. He could only hope that she wouldn't fret too much, and he would have to put aside his guilt and try to enjoy the town. He was too tired to explore much, so he confined himself to a quick excursion of his hotel's street, snapping an initial round of photos, promising to capture the more interesting sights the next day: 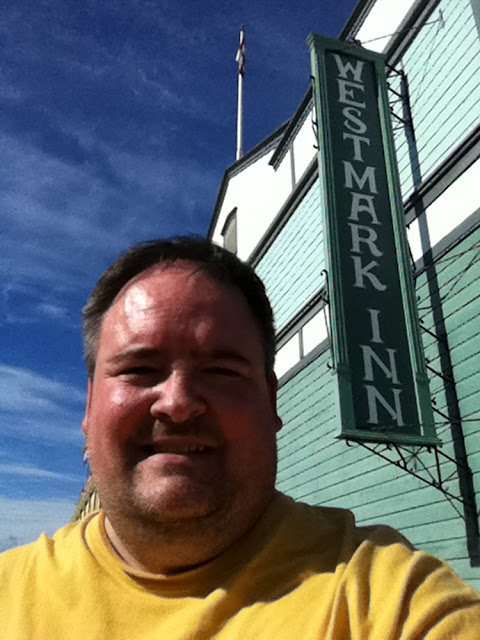 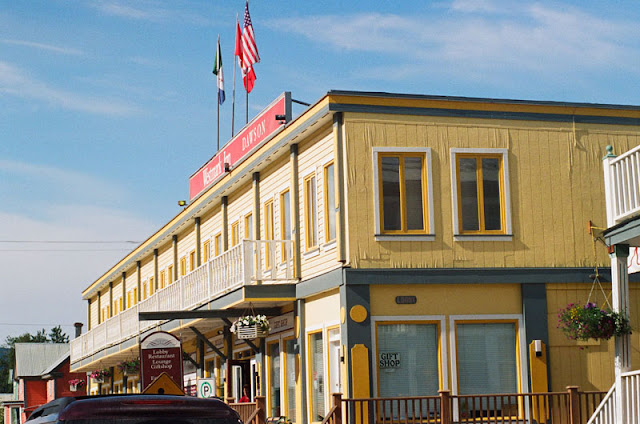 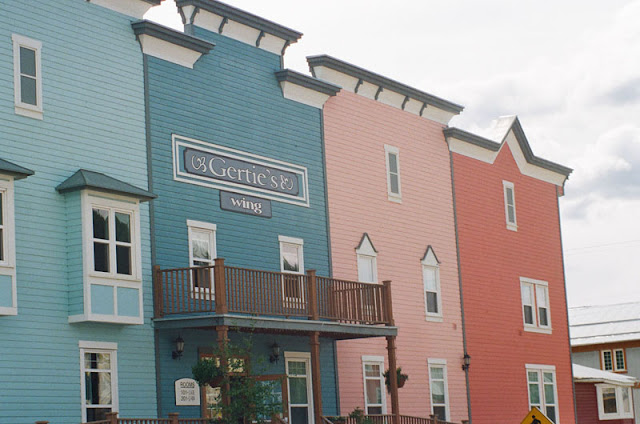 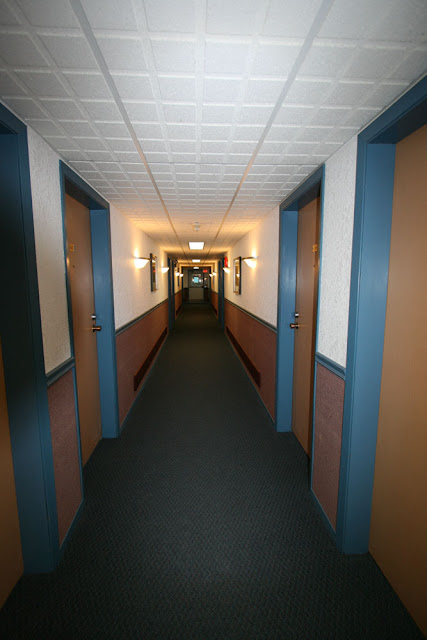 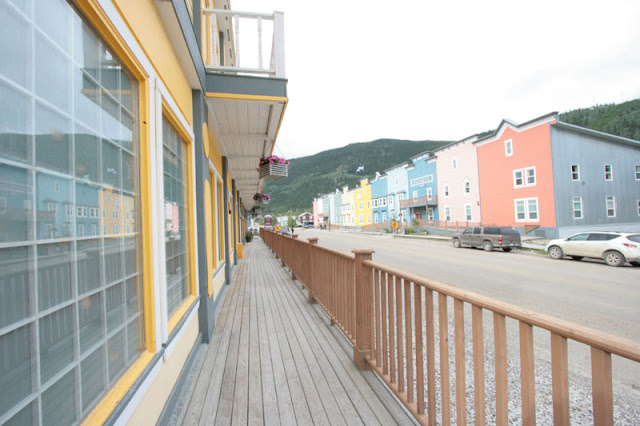 Too many hours without sleep curtailed his meanderings. Tomorrow, he thought, I'll spend most of the morning here, then drive to Whitehorse. I'll be there a couple of days - time enough to explore the Yukon capital and ride the famous train to Skagway, Alaska. And then I'll start the long drive home. Soon he'd be back in Edmonton with a fine collection of photos and fond memories.

It was the day before disaster.
Posted by Earl J. Woods at 10:35 am