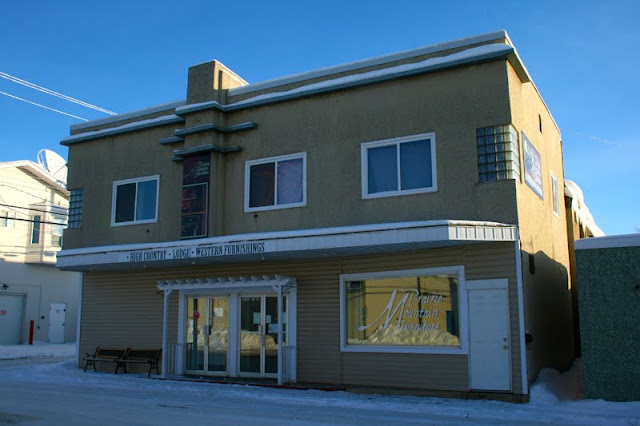 Thirty years ago this month, I saw Star Trek: The Motion Picture for the first time. I attended a screening at Leduc's original Gaiety Theatre, plunking myself down in what was then my favourite seat - right hand column, front row, leftmost seat.

At the age of ten, I was already a huge fan of Star Trek, having watched scores of repeats on CBC in Leaf Rapids. With my friends John and Glen and Kelly and a set of the original landing party model kits (faithfully recreating the phaser, tricorder and communicator), we sought out strange new worlds in the deep and mysterious woods of that northern community - already quite a strange world in and of itself.

My family moved to Leduc, Alberta, just a few months before Star Trek leaped from the TV screen to the movie screen, and I was still missing Manitoba. But the prospect of a new Star Trek movie made the move a lot easier to bear, so I was pretty excited as I sat in the Gaiety and waited for the curtain to unfurl.

Much of the criticism is fair. But I contend that the first Star Trek film is among the best of the series, not the worst. Furthermore, this movie is the only true work of science fiction in the entire series.

The film has many strengths. Jerry Goldsmith's Oscar-nominated score truly soars, and indeed became iconic. (Interestingly, Star Trek: The Motion Picture is one of the last films to open with an overture.) Douglas Trumbull's special effects created a completely believable 23rd century civilization and an awesome - in the true sense of the word - threat from outer space. The models and sets were first rate; for the first and last time, the Enterprise felt like a real starship with a crew of hundreds and working parts that made sense within the world of the film. And Robert Wise's direction is steady and sure, especially considering that the script was still being revised even as he was shooting the film.

Even the film's pace is, I believe, a strength - if you have the patience. There are long stretches in the film that pass without dialogue, only music, including Kirk and Scotty's minutes-long tour of the refitted Enterprise, a scene that virtually no director or editor would allow today.

I think that's a shame. That tour of the Enterprise, intercutting between the ship itself and Kirk's reaction to its new appearance, say much about the world of the film and the protagonist's personal journey. The orbiting office complex, the tiny shuttlecraft and spacesuited astronauts whizzing by - these elements tease our imagination, making us wonder what kind of society humanity has built that could create such casual wonders. And Kirk's regrets and longing are written all over his face, revealing a fragile emotional state that sets up and explains some of his bad behaviour in the film.

The film also slows down when the Enterprise intercepts the film's antagonist, the mysterious, all-powerful Vejur, a gigantic cosmic cloud of energy that contains a vast machine intelligence. Again, critics have said that this sequence goes on far too long, but I believe that patience is rewarded if one actually thinks about what one is seeing: machinery that is eons old, of such complexity and scale that it is literally beyond our ability to comprehend. Frankly, I think that's pretty amazing stuff.

And that is why this film is the only real science fiction film of the series, for Vejur's story raises the apocalyptic possibilities of human technology outgrowing its creators. When Kirk, Spock, McCoy and Decker reveal Vejur's secret, they are confronted with the sheer scale of the universe and all the infinite majesty contained within it. And at the film's climax, they help the Vejur entity grow still vaster, raising profound existential questions.

Other Star Trek films may be more entertaining, but they are all space opera, as much about the characters as big ideas. Yes, Star Trek II has the Genesis Device, but that movie is not about terraforming. Other Star Trek films feature time travel, cloning, environmental destruction and other science fiction concepts, but in each case these are merely storytelling devices, not the story itself. (Ironically, William Shatner's universally derided Star Trek V: The Final Frontier comes closest to telling an actual science fiction story - what if God turned out to be just another alien?)

Star Trek: The Motion Picture is full of little moments to love. Ilia's disintegration is artfully directed and shot by Wise; it's a genuinely chilling moment when the sound and fury of the probe that kills her is suddenly replaced by utter silence, save for her tricorder falling to the floor with a thud. The ugly transporter accident near the beginning of the film is also very effective not only as a moment of horror, but also implies that Kirk's obsessive behaviour in the film is having very dire consequences for the people around him. McCoy, as usual, gets the best one-liners, and his initial bearded, leisure-suited appearance is an image for the ages.

As an aside, I always feel bad for Captain Willard Decker. In the course of this film, Kirk takes away his ship and demotes him from Captain to Commander/Executive Officer for no good reason other than to satisfy his own desire to command the Enterprise again. Then, when the original science officer, Commander Sonak, dies in the aforementioned transporter accident, Kirk orders Decker to take on Sonak's duties as well as those of First Officer. Then Spock shows up and supplants Decker as science officer. A short time later, Decker is reunited with his old lover, Ilia, only to watch her killed before his eyes. When a robot duplicate of Ilia appears on the ship, Kirk orders Decker to interact with it to learn more about Vejur. One can only imagine how painful this must have been for Decker. Finally, when Vejur itself seems bent on sabotaging Kirk's attempts to resolve its existential crisis, Decker volunteers to merge with the machine entity, essentially killing himself - or at least sacrificing his physical form. To be fair, Decker himself says that he "wants this" as much as Kirk wanted the Enterprise, but still, no one in this film endures more than this ill-fated character.

Star Trek: The Motion Picture is by no means a great film. Objectively speaking, perhaps its not even a good film. But I appreciate it because it's ambitious, sincere, and asks big questions. I left the Gaiety Theatre that day as excited as I ever had been about a show and a world I loved, and having just watched it again on Blu-Ray, its charms are even more evident today. With the pacing of modern films having accellerated beyond breakneck speed, it's a pleasure to sit down with a movie that takes its time.

I've always liked ST:TMP, so I am in agreement with much you are saying, especially about the musical score which is wonderful.

I've heard ST:TMP described as a "procedural", like the old cop shows, i.e. Dragnet, Streets of San Francisco, and then Homicide and The Wire. Gene Roddenberry was a big fan of both sci-fi and procedural; you know that before Trek he made a cop show called "The Lieutenant".

I also like procedurals. They suggest that for every situation there is a procedure. A lot of cop work is very much routine. However, there are a lot of things that police do and confront that either goes against the rulebook or against human morality. That's where the drama comes in.

These days, I think people don't seem to have patience for procedurals. They don't want to learn, for instance, the 10 Rules Of The Homicide Detective as relayed to us one painful example at a time to us in David Simon's "Homicide: A Year On The Killing Streets". Much easier to send trace evidence to the CSI Lab and nab the killer before the show's 44 minutes are up.

ST:TMP works as a procedural as well. There are a number of things that happen that we see are covered in the Federation rulebook. The Enterprise is powerful but not invulnerable, and so there are many emergencies to deal with. Up until Ilia is zapped by Vejur, the captain and crew follow procedure.

Vejur has other plans, though, and things spiral into near-desperation. I find it interesting that stoic Spock is the character who improvises the solution to the crisis, although it can be argued that his choices were logical.

It's a lot different now. In Star Trek, you can immediately sense that when a character says, "If we (insert gimmick), then maybe we can (insert gimmick)", then something magical/made-up/deus-ex-machina is going to circumvent procedure and save the crew. The debris left behind are bits of space-opera double talk: flux capacitors, plasma inducers, warp coils, etc. After a lot of repetition, those catchwords become more important than the motivation of the characters.

On the other hand, I guess we could watch a film where Nero spends 20+ years assembling the components to build a bomb big enough to blow up a planet, or we could just condense it all down to one very cheesy, guilty-pleasure line: "Prepare the Red Matter!" What we lose in procedure, we gain in pace.