Return to the Edge of Nowhere, Part II

Read Part I first!
Ah, Fuddruckers. During my university years my friends and I used to eat at the location on Edmonton's south side and provide silly names to the servers calling out orders: "Cardinal Fang, your order is ready," and so on. Perhaps such juvenile antics prompted the chain to switch to numbers, as seen in the video above.

Speaking of the video, at one point I'm standing on a sidewalk babbling about wind powers. Here's the context; seconds earlier, a pretty impressive dust devil was swirling debris into a dramatic mini-cyclone. I thought I'd stand in the middle and pretend to have mutant powers. Unfortunately, by the time we set up the camera, the dust devil petered out. 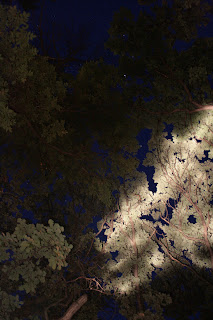 Oak Lake is a popular summer destination for Manitobans. Until this trip I hadn't visited the place for decades, and my memories of it are seen through the haze of too many intervening years. But emotional impressions can often be even more powerful than concrete memories, and when Sean and I pulled in to the park I certainly felt warm pangs of nostalgia, despite my professed ambivalence to camping.

Sean, on the other hand, enjoys camping and has often gone out to camp alone or with friends. Naturally I deferred to his greater experience when it came to cooking outdoors and setting up the tent. Cruel fate, mischievous as ever, annoyed Sean by consistently deflating his air mattress during the night. On the morning of our brief stay at Oak Lake, I asked Sean if he'd had a good rest: