A View of The View from the Bridge 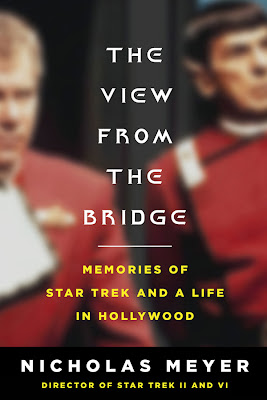 Books and movies have gotten me through some pretty tough times, and I'm fairly certain that this is the service they perform for most people, who could use a breather from reality and some inspiration every now and again, a time out before returning to the battle.

- Nicholas Meyer, The View from the Bridge

Nicholas Meyer is famous for, in roughly descending order: his writing and directing contributions to three of the best Star Trek films, the horrifying nuclear war telemovie, The Day After, and his Sherlock Holmes novels, The Seven Percent Solution in particular. In his new book, The View from the Bridge, Meyer, with wit, humanity, humility and candor, describes how his numerous books and movies were created, along with an honest accounting of his personal and creative failures.

Meyer's prose is clear, personal and inviting. With self-effacing humour and forthrightness, he explains his journey from New York to Hollywood, and how a combination of happy accidents and determination led to his so-called "overnight" success. He writes of the bad, early death of his mother and the years of psychotherapy that followed; and later, he shares the story of the painful loss of his first wife, who also died too young.

Star Trek fans, and fans of film in general, will find the chapters on moviemaking most illuminating. Anyone who follows the industry already understands that any film that actually gets produced is something of a miracle, and films that are actually good are even more miraculous. Meyer describes the everyday battles between writers, directors, producers and stars, including clashes over money, story, music and even the titles of the films themselves.

Someone said that Hollywood is like an extension of high school. I am not sure exactly what this means but I do acknowledge the place's stratified aspects, among which is the difference between having a hit and having a flop. With the success of The Wrath of Khan I was suddenly popular. If Time After Time had registered in the town's eyes, as a succes d' estime, The Wrath of Khan was just a big, fat hit and it catapulted me into the ranks of "bankable" directors.
- Meyer, from the chapter on The Day After

As profoundly influenced as I have been by Star Trek, Meyer's The Day After hit me nearly as hard, with its horrific vision of nuclear apocalypse. I was 14 when the telemovie was broadcast, and while I thought I was emotionally prepared for what I was about to see, no amount of warning could have prepared me for the sight of those mushroom clouds obliterating scores of human beings and leaving many more burned black with radiation. Meyer's bleak story conjured nightmares that lasted for weeks. Clearly he had his own trepidations about the prospect of tackling such a grim issue:

Like most people, I preferred to avoid the entire terrifying topic. What sort of person willingly immerses himself in the prospect of nuclear annihilation? Everyone knows the bombs are out there, Damoclean swords dangling over our necks, and that knowledge - semiconsciously carried around inside our heads - is more than sufficient for most of us.

But Meyer wanted a new challenge, and the film was made, with more than the usual amount of nervous nitpicking from the money men, including their insistence that the film show that it was the Soviets who started the war. Meyer wanted that point to remain ambiguous, and in the end he won out, to the benefit of the movie.

The Day After may have had a more profound impact than Meyer could have guessed, for some years later, when President Reagan signed the intermediate range missle treaty, Meyer received a postcard that said "Don't think your film didn't have something to do with this." Later on, Meyer discovered that Reagan's autobiography included a passage admitting that viewing the film had changed the President's outlook on the subject of nuclear war - where once he had thought of a nuclear conflict as winnable, after seeing and thinking about the film, he realized that no one wins a nuclear war.

Meyer himself is careful not to claim any credit for the easing of nuclear tensions during the late 80s and throughout the 90s. But I wouldn't be surprised if the movie did indeed help change some important minds. Perhaps books and movies have "gotten us through tough times," as Meyer writes, in more substantial ways then merely providing escape and inspiration.

I highly recommend The View from the Bridge to anyone interested in Star Trek, filmmaking or screenwriting.
Posted by Earl J. Woods at 11:54 pm