Journey to the Edge of Nowhere, Part V: Approaching Nowhere

We woke the next morning and left Grandma, Val and Cranberry Portage behind, knowing that Leaf Rapids, the edge of nowhere, was drawing near. But first, we'd encounter Thompson, Manitoba's third-largest city, a mining town over 700 km north of Winnipeg. 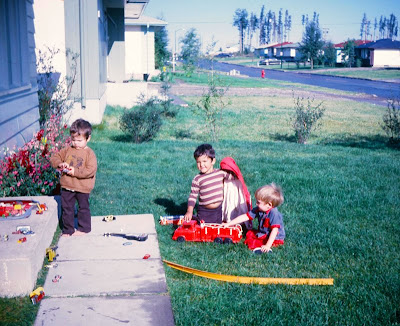 I have no childhood memories of Flin Flon, my birthplace, but I do still retain a few flickering images of life in Thompson. I remember, for example, my earliest friends, Matthew and Michael Hawkins, who lived across the street. Their dad worked in the mine; their mom worked at A&W. We had fun playing in the "secret tunnel" in their house - a tunnel that was really just an extended storage space large enough for small children to crawl through and explore. 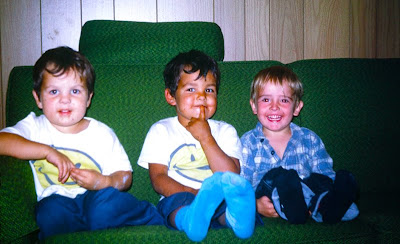 At the time, Dad worked at Acklands Ltd. while Mom stayed home to take care of me. Once there was a small fire in our little house, and before running to safety I made sure to retrieve my prized bucket of toy cars. (My parents still laugh about this.) It's the one and only time I've seen firefighters enter a home I've lived in, but it wasn't a scary experience at all; I remember being annoyed more than anything else. 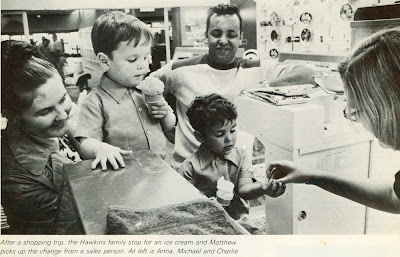 The Hawkins family was featured in a 1972 issue of IN Manitoba magazine, a publishing venture of Inco Mines.

I also remember that one of the kids next door stole my prized Tonka truck. A bleak day. I seem to recall that Dad challenged the neighbours, but he had no proof and they wouldn't budge. It was, to the best of my memory, the point at which I learned about the practical realities of man's inhumanity to man. And yet today I wonder if perhaps the kids next door stole not out of malice, but out of envy or simple desperate need. It was a great toy, and while we weren't rich by any means, we got by...perhaps the neighbours had less. I'll never know. I hope the kids who stole it enjoyed it as much as I loved it, even though now I can't remember what it looked like, exactly. Yellow...with a steam shovel attachment? Or was it a dump truck? 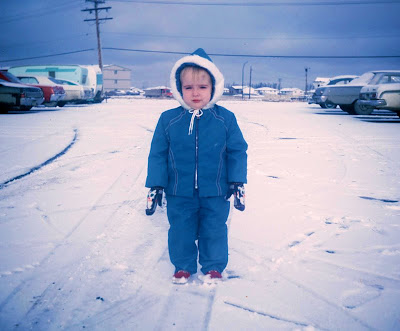 And finally, I remember the cold winters... 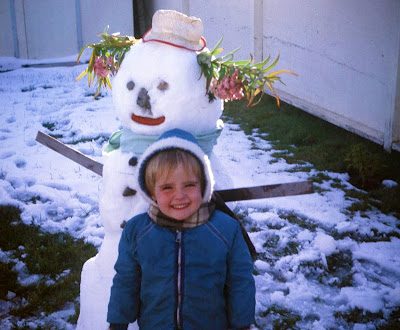 ...and how wonderful spring felt. Strangely, I remember that snowman's mouth quite vividly; we used a weiner to create it, and I remember the weiner-shaped impression the weiner left behind when it fell out a couple of weeks later. 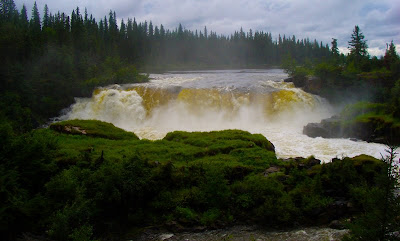 On the way to Thompson we pulled into the Pisew Falls rest stop. The wooden boardwalk from the rest stop down to the falls wasn't particularly accessible, so Sylvia, unfortunately, had to stay behind while I walked through the woods, down to the river. It's too bad; the Pisew falls aren't huge, but they are impressive, especially tucked away in such a remote location. Even from the distant viewing platform, you can feel the spray of water and practically taste the scents of the forest. I soaked in the atmosphere for a while, missing Sylvia and yet enjoying the solitude, the feeling of being separated from the great mass of humanity. My childhood felt very near, the years slowly being compressed to months, days, minutes...seconds would have to wait for Leaf Rapids. I wasn't home yet.

I climbed back up out of the thickly wooded valley, the Pisew's low roar fading behind me. Minutes later, Sylvia and I were back on the road, heading northeast. Along the way we spotted a wolf, lurking beside the road, watching us intently and then disappearing into the wilderness with the eerie grace of a ghost. Not long after I saw a very strange bird - something like an ostrich crossed with a peacock. "Holy cow, did you see that?" I asked Sylvia, but she'd been looking the other way, and then we rounded a curve and it was gone. It must have been a figment of my imagination, but the colours were so vivid - purples and oranges and yellows on some huge, long-legged, swan-necked thing. Impossible.

But that's northern Manitoba all over. 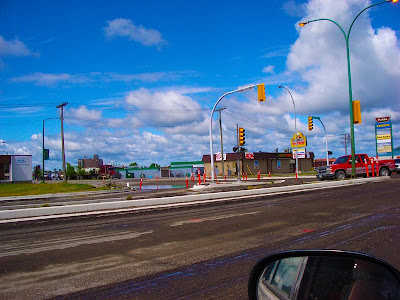 And then, there it was. We didn't explore Thompson; I was too eager to get to Leaf Rapids. We took time only to note that this small northern city was about as noisy, dirty and boisterous as you might expect from a remote mining community, a town a little rough around the edges; I imagine Fort McMurray, Alberta's big oilsands city, might be a little like Thompson.

Another memory returned, however, just as we were crossing Thompson's big bridge: I remembered the fast food joint that played fast and loose with the Popeye characters, using them, I'm sure, without clearing the copyrights. Who would ever notice?

We stopped for lunch and enjoyed the typical burgers and fries you find at this sort of place, just hot and greasy comfort food of little nutritional or culinary value, and yet still somehow satisfying.

And then we were on the road again. Now there was nothing between us and a small town that haunted me but a vast swath of impenetrable forest and gravel road...and about a million years of memories. I began to wonder if, when we reached Leaf Rapids, Sylvia would think I was crazy for wanting to return. I wondered too if the strange fairyland I remembered would be completely shattered by the hollow shell I knew the town had probably become in the wake of the Ruttan Mine's shutdown and the numerous forest fires.

But it was too late to turn back. In a few hours, we would reach the edge of nowhere. 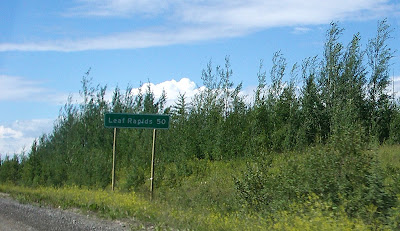 Great story, so far! You are sooo cute in your little snowsuit!!!

Earl has PRECISELY the same facial expression standing in the cold in his snowsuit as he does roughly forty years later trudging through the snowbanks planting his plastic Liberal voting signs: Stoic Canadian Sang-Froid.