I wrote this review way back in the spring of 1991, again on Freedom BBS.

Last night I had the pleasure of viewing the Canon Group's kung-fu fistfest, American Ninja, starring the unequalled Micheal Dudikoff in the title role.

American Ninja is the touching tale of a lonely man--known only as "Joe"--who just happens to have great prowess in the mystic arts of the Ninja. Joe knows not where his skills came from--his earliest memory is of a great explosion at a mine he was caught in as a youth. Joe's troubled childhood is filled with strife and lonliness; Joe moves from reform school to reform school, until finally he is forced to join the US Army. Joe is posted on a war-torn Pacific island, where he is looked upon by his fellow Marines with disdain. "We like teamwork in this outfit, fella."

Trouble begins when the Rebels begin hijacking US arms shipments to use for their own nefarious purposes, and it is here that the movie heats up. A Rebel attack is stopped as Joe, using his incredible martial arts, beats the tar out of no less than a dozen rebel fiends. In one memorable scene, Joe rolls to a toolbox under a hail of rebel machinegun fire. Thinking quickly, he grabs a screwdriver and throws it, daggerlike, into the shoulder of one gunman. Next, Joe wields a tire iron, flinging it square into a hapless rebel's mouth. But Joe's efforts are in vain--for, streaming out of the jungle, comes a horde of black-garbed Ninjas!

The ninjas make short work of Joe's marine buddies, who fall under a hail of arrows, throwing stars, and swords. The Ninjas even go so far as to threaten the beautiful Patricia, US Army Colonel Wild Bill Hickok's only daughter.

Fortunately, Joe is there to defend her, deflecting arrows with the handle of a conveniently nearby shovel. However, Joe realizes he is outnumbered, so he and Patricia flee into the jungle and jump into a river to hide. This maneuver not only saves our stalwart couple from certain doom, but it also allows the viewer some choice glimpses of Patricia's anatomy, revealed by her now-soaked white blouse.

The action just keeps on coming as Joe fights Ninjas, traitorous Army officers, European gunrunners, and even his best friend. Joe's greatest fight, however, is for the understanding and acceptance of his peers. The climactic ending is truly touching--Patricia, kidnapped by the evil Ninja clan, is held captive in the evil Ninja training school. At first, Joe believes he will have to rescue her alone--but wait!! Out of the jungle mists comes Joe 's adoptive father, a wizened old Japanese soldier (one of the ones trapped on an island in the Pacific for twenty years after WWII ended and who still thought the war was on). Joe's pop returns to join him in the rescue of Patricia, but is, tragically, killed in the act of saving Joe from the evil Head Ninja, the Black Star Ninja. Joe, sobbing, attacks the Ninja horde, but the effort is impossible--he is wildly outnumbered. But then, over the hills--the US Army! Trumpets blaring and guns blazing, the 'good 'ol boys' charge into the training camp to lend Joe a hand, armed with APCs, jeeps, heavy machine guns, and grenades. The unarmed evil ninjas fall like chaff before the Marines' awesome assault. But the evil French arms dealer is running off with Patricia! Thank Goodness that Joe manages to grab the underside of the escape helicopter as it makes its lunge for freedom. Joe manages to grab Patricia just in time, leaping from the chopper just as Joe's best friend Jackson blows it up with a Made in the USA rocket launcher.

With the last bad guy blown to kingdome come, Patricia, Jackson, and Joe can relax...at least until American Ninja 2.

Rating: 9 out of 10 for pure bad movie enjoyment. 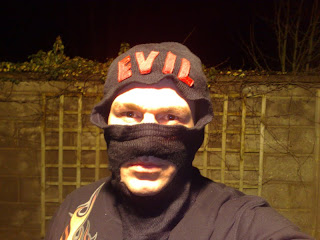