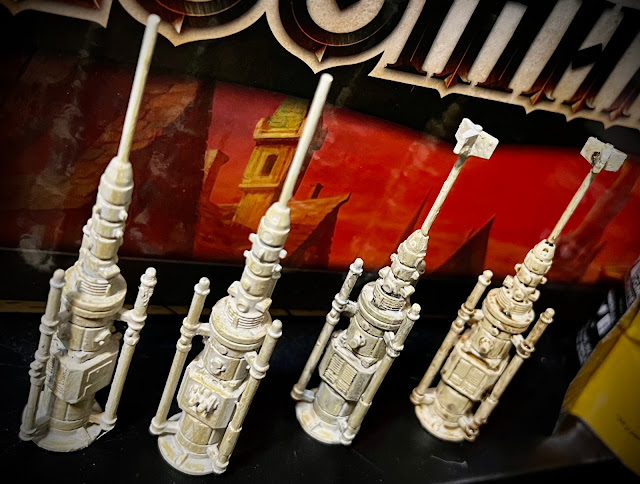 "Sorry," I replied. "Out here, I really don't need a protocol droid."

"Clearly not, sir," the droid said. "But I'm programmed for over thirty secondary functions..."

"What I really need is a droid that understands the binary language of moisture vaporators."

The droid seemed to perk up, even though its metal face was eternally frozen.

"Vaporators! Why, my first job was programming binary load lifters, very similar to your vaporators in most respects."

This caught my interest. "Do you speak Bocce?" I asked.

I was about to tell the Jawa salesthing that I wanted the robust-looking R5 unit, but it blew its motivator before I could get the words out. I quickly changed my mind, hoping that the only other alternative was in better shape. Almost as though he was reading my mind, the protocol droid piped up:

"Excuse me, sir, but that R2 unit is in prime condition. A real bargain."

"I'm sure you'll be very pleased with that one, sir. He really is in first-class condition. I've worked with him before," he said.

I led the droids over to the garage. "My wife will drop in to say hello soon, I'm sure," I told them. "In the meantime, give yourselves some maintenance and an oil bath. I'll take you out to the sand fields after lunch.

"You can lead a droid to water, sir, but you can't make him drink! That's a little joke," the protocol droid said. "Because we don't drink water, you see."

I raised my eyebrows. "I imagine it's funnier in Bocce," I said.

I met Sylvia in the kitchen. "Any luck?" she asked.

She took a swig of blue milk and put the empty glass in the dishwasher. One day we'd farm enough moisture to justify a 'washer that used water, but sandblasting would have to do for at least another season--assuming they stayed that long.

"You left something for the Lars, I hope?"

I winced. "To be honest, it was pretty slim pickings. I think we might have gotten the best of the lot."

"Well, make sure you let Owen and Beru know they can borrow the droids when they need them."

"Sure, sure," I said, rifling through the cupboard for some bantha flakes.

"I'm going to go see what our credits bought," she said. "Maybe I'll take them out to see the fields."

"You go talk to the neighbours. You could use the walk."

Well, that was fair. Generally life on Tatooine kept you pretty thin, but the last couple of harvests had been pretty decent and I'd definitely put on a few pounds thanks to overindulging in blue ice and beskar in a pan.

When I returned from my visit with the Lars, Sylvia was waiting for me in the courtyard with the droids.

"This little robot claims he belongs to Obi-Wan Kenobi. Do you think he means old Ben Kenobi?"

"Oh, man. I hope not. Otherwise I just threw away 250 credits and probably contributed to the sale of stolen goods. Argh, those jawas..."

I wasn't keen on driving into the Jundland wastes, but Sylvia was right--we had an obligation to ask if old Ben had been a victim of droid theft. So we piled into the landspeeder and jetted over to the Kenobi homestead, a modest little place.

The trip went by without incident, thankfully, but at first Ben denied ever having owned a droid. The R2 unit went mildly apoplectic, rocking back and forth on its stubby legs and whistling and hooting like a thing possessed.

"Artoo insists he has an important message for you from Princess Leia," the protocol droid--C3PO, Sylvia had informed me--translated. This prompted an even more raucous response from the astromech. "Well, you didn't tell me I shouldn't say that in front of Master Earl and Mistress Sylvia!" Threepio protested.

"We don't want to intrude," Sylvia said. "We should be getting back."

"Sure," I added. "If this isn't your R2 unit, we can come back for it later. Threepio, stay here in case Mr. Kenobi needs your help translating."

The old man smiled beatifically at us as we took our leave.

"Princess Leia? Isn't she a senator from Naboo?" Sylvia asked as we pulled away from the Kenobi home.

"Alderaan," I said. "Who would have thought Ben Kenobi would have connections like that?"

"Well, it's none of our business. At least it looks like we'll probably get the astromech back," Sylvia said.

"And then just a couple more seasons until we've saved up enough money to buy a little ship that can take us someplace far, far away from the Empire," I replied. "It'll be a long, hard couple of years, but after that we can finally relax and be free."

"If the Force is with us," Sylvia said.

I was an atheist, but I nodded anyway--I wouldn't turn away divine intervention if it could get us out from under the Imperial heel. Maybe we could take old Ben and the Lars and their nephew with us. They were all good people...

Moisture vaporators are hard to draw! Lots of tight curves and then boxes that all have to be in perspective. It's rare to see one head-on, as well.

I was going to post a comment on Master Earl and Mistress Sylvia, but too risqué, alas.