Men with Brooms, Man with Opinion 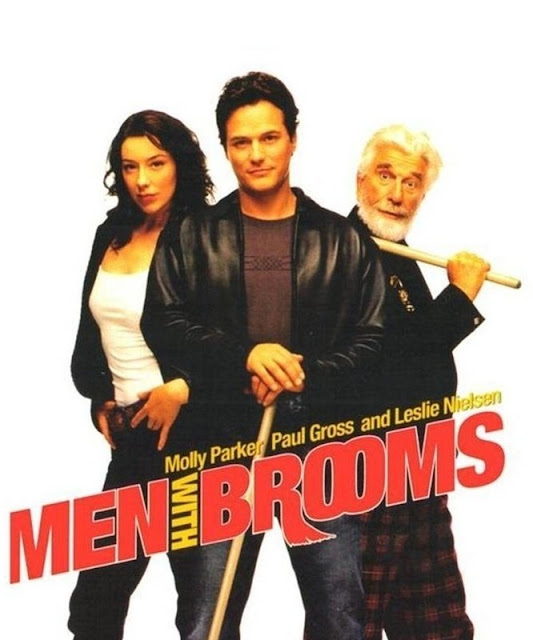 I'm probably giving this a half-star more than it deserves out of a fondness for Paul Gross' work in Due South and Leslie Nielsen's work in...well, everything I've seen him in, really, including a great guest turn on Due South.

As for Men with Brooms (Paul Gross, 2002), well, if you're not put off by the incredibly creepy CGI beavers that open the film, you might enjoy the performances (Molly Parker is particularly effective) and the and the few sitcom-level jokes that don't fall completely flat. Oh, and if you like curling, you might be amused by the scenes that take place on the rink. Finally, there are also a handful of love stories, two of which are kind of sweet if you're sentimental (as I tend to be). All told, however, most of the humour is stale, the drama flat, and the plot beats predictable. It's not that the film is terrible, but it does have an awful lot of wasted potential: a mildly interesting central idea, a strong cast, and a chance to explore one of the few aspects of Canadian culture someone outside the country might be able to name.

Someday someone will make the great Canadian curling movie. This isn't it, but writer-director-lead actor Gross deserves credit for taking his best shot - even if it misses the button by a couple of kilometres.
Posted by Earl J. Woods at 6:26 pm

Well actually <pushes glasses up on nose>, as a curling fan (or at least one who is conversant and somewhat appreciates it), you won't like the curling scenes. ;)

Heh, yeah, fair enough. The exploding rocks were a little much and there was very little dynamism in the way the matches were shot, but I liked the bit where they symbolize the skip's original sin with the burning rock. True, that doesn't take place during a match, but it does happen on a rink...

I do like the curling scenes, though. They provide a good bridge between today's hypercompetitive Olympic-style curling and the brand that was played by Ed Werenich back in the day when he won the national tankard with a beer in one hand, a broom in the other, and his smoke hanging from his lips like a half-pasted postage stamp. To me that's really Canadian, but maybe not something I want to see in movies, either.

Hyena Road was pretty good. Sort of like Passchendaele but 75% less goofy.