Just 20 light years away, there's a planet that might sustain life. It's called Gliese 581g, and scientists say that it orbits in the so-called "goldilocks zone," the range of distance from a star that's neither too hot nor too cold for liquid water and thus, the possibility of life.

There are a few caveats. Apparently the planet is tidally locked, with one side forever facing its star, the other eternally turned away, making one side very hot and the other very cold. But at the terminator between light and darkness, milder temperatures could allow for the evolution of extraterrestrial life.

News like this makes me so grateful to be living in this era of exploration and discovery. Just imagine what we'll learn fifty years from now, when telescopes and other observation instruments are even more powerful, when probes can fly farther, faster, and with better equipment. One of my greatest hopes is to still be around when scientists discover the first life beyond our world; whether they find microbes or intelligent beings, that knowledge will utterly change the world, and open up vast new horizons.
Posted by Earl J. Woods at 9:23 pm No comments: 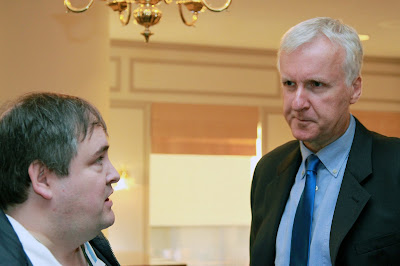 Academy-award winning director James Cameron reacts with shock and horror as deranged fan Earl J. Woods presents him with a pile of spec scripts.﻿ "What the hell is Finger Puppet Star Trek? Generous Nature? Toilet Chase? Uhhh..."
On the way to work this morning, I happened to run into James Cameron, director of some of my favourite films - The Terminator, Terminator 2, The Abyss, Aliens, etc. Seizing a once-in-a-lifetime opportunity, I whipped out my portfolio and forced it into the director's hands as he tried to escape...
Actually, that's not what happened. Cameron is in Alberta to learn about the oil sands and to see what he can do to help First Nations peoples affected by the environmental consequences of oil sands development. The First Nations of Fort Chipewan, grateful to Official Opposition Leader David Swann for his interest and promotion of their issues, arranged for Swann to meet with Cameron this morning. 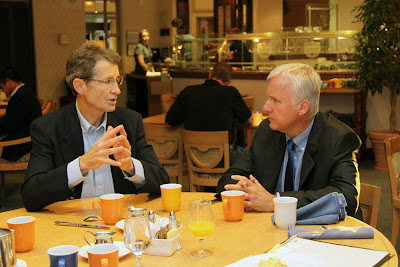 I went along to shoot some photos, and my boss Neil Mackie, knowing what a huge science fiction and film fan I am, had David introduce me to Cameron. I stammered something or other about loving his work, and the director was very gracious indeed in his response to probably the zillionth fan to say something he's heard many, many times before. "Suck them in with a little action and adventure and sell a good message," he said. That describes the Cameron canon, all right.

Personally, I don't like to bother people, especially famous people who I imagine must have to put up with a tremendous amount of nonsense from fans. But I have to admit that I'm grateful to David and Neil for providing me with what was, in truth, a thrilling moment. And I'm grateful to my coworker Tanara for snapping a candid of the moment! 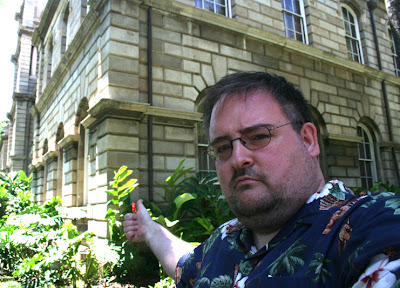 Earl outside Steve McGarrett's original office in Honolulu, 2008
While watching the new Hawaii Five-O, it occured to me that the reimagined show's title has no internally consistent reason for existing. Allow me to explain. ﻿
The original show was so named for the (fictional) state police department of the 50th state, Hawaii; hence, "Hawaii Five-O," shorthand within the universe of the show for the 50th and final state police department of the United States. Presumably in this universe, a show about the state police of Alaska (if indeed they have state police) would be named Alaska Four-9. While Hawaii does not, in reality, have a state police force, the show was so popular that in the real world, police officers of any geographic location came to be referred to as "five-o."
If the new show were a mere continuation of the old - that is, if the characters were new and the adventures of Steve McGarret and Danno and Kono and all the rest were acknowledged to exist in the past of the new show's fictional universe, the title would still make sense. The old show was Hawaii Five-O; the new show is Hawaii Five-O.
But the new show's characters all have the same names as characters in the old show. So there are new actors playing McGarrett, Kono, Danno and Chin Ho. Presumably in this universe there was never a television show called Hawaii Five-O; otherwise, the new Kono, McGarrett et al. would presumably be amazed that four people with the names of famous characters of the seventies were brought together to work in similar circumstances, namely serving as police officers in Hawaii.
"Say, McGarrett, isn't it weird that you and I and Kono and Chin Ho all have the same names as the guys from that old tv show?"
"Yeah, it's weird. But it's not THAT huge a coincidence, because the real Kono is a girl, and the dude on the show was a guy."
"Oh yeah, that's true."
Since this conversation never occurs, we can infer that the original Hawaii Five-O (the television show, that is) does not exist in the world of the new show. But even worse, there's no reference to a state police force in the new show; the characters just work on some kind of "task force." They can't call themselves "Hawaii Five-O" because there is no 50th state police force in the world of the show. But since the original TV series didn't exist in the world of this show, nor can they call themselves "five-o" colloquially, because the reason for the catchphrase - the original show - doesn't exist in the world of these new characters.
Of course you could argue that television show titles exist outside the narrative. But Hawaii Five-O's title was uniquely derived to highlight a crucial aspect of the fictional world it created: there exists a state police force in Hawaii, and these are their adventures.
I think we should get Steve McGarrett on this case immediately.
Posted by Earl J. Woods at 7:32 pm No comments:

Dilithium crystals were invented by Star Trek's producers as a plot point for an early episode; there is a real-world molecule known as dilithium, but it doesn't power starships (so far as we know). 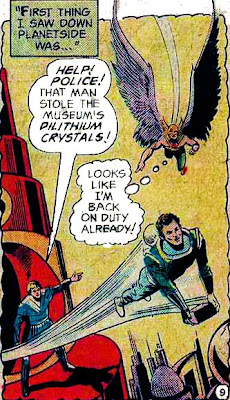 Apparently dilithium crystals are rare and valuable in the DC universe too, as seen in this early 70s issue of Justice League of America. Here Hawkman, in his role as a police officer of the world Thanagar, rushes to apprehend a thief of the legendary crystals. Oddly, he's stealing them from a museum. Perhaps they were the very crystals first seen in "The Naked Time," preserved by Thanagarian historians for posterity. Well, except this story takes place in the 1970s and the Star Trek episode occurs in the 23rd century. On the other hand, it was a time travel episode, so...
Posted by Earl J. Woods at 9:58 pm No comments: 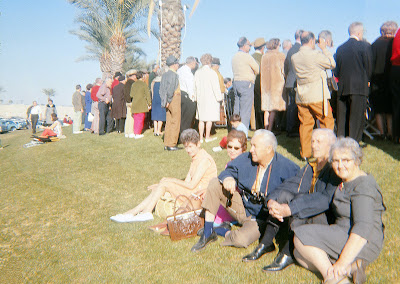 I picked up a new scanner for the express purpose of archiving Mom and Dad's collection of old slide photos. It works pretty well for most slides newer than late 70s vintage, but some of the older slides in their collection don't have the standard frame size of later 35 mm slides. I ran into this problem back when I took some slides in to London Drugs for scanning; their scanners returned photos with chopped off heads and all kinds of other problems. Their equipment just wasn't made to handle older slides.

My home scanner does a much better job, although sometimes I have to align the slides vertically instead of horizontally to ensure that the full image is captured. But with some slides, not even that will ensure the whole image is captured. For this slide of my Great Aunt Blanche - she's at the lower right - I had to scan the original slide twice at different angles, then combine the two images in Photoshop. At this rate, it's going to take me years to archive the hundreds of slides in Mom and Dad's collection, but I think it's a job worth doing - not only for the sake of family history, but because I find old photos inherently fascinating. 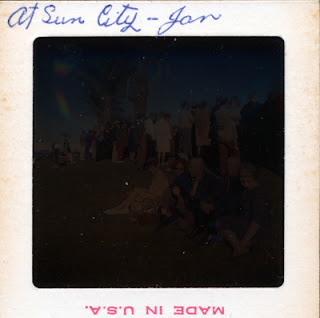 When I first glanced at the slide, I thought perhaps Great Aunt Blanche had attended an Apollo rocket launch, based on the tropical foliage and the late-sixties fashions. But as you can see, the slide itself is labelled "At Sun City - Jan." (Presumably January, though what year, I wonder...) Was Great Aunt Blanche taking in a concert in Sun City, South Africa? Or are the people on the hill watching some kind of sporting event?
Great Aunt Blanche died a few years ago at a very ripe old age, so I can't ask her. I'll have to ask my parents if they remember.
Posted by Earl J. Woods at 11:24 pm No comments:

Laurie Blakeman on Conservation, Land Use and Oil Sands Development

Alberta Liberal MLA and Official Opposition Environment Critic Laurie Blakeman points out that the Alberta government is on the cusp of making some far-reaching decisions about how land in the Lower Athabasca region will be developed in the long term, and how much of that land - currently up to a mere twenty percent - will be conserved, leaving eighty percent open to development. The Alberta government will be holding open public stakeholder meetings at various communites in Alberta throughout September, and you can also leave your thoughts online. Visit http://www.landuse.alberta.ca/ for details.

Full disclosure: as a staff member of the Official Opposition, I did a small amount of work on this video (I took a couple of the still photos).

Edited to add: for some reason, embedding videos doesn't work very well with my blog setup, resulting in some of the image being cut off at the right. Until I solve this problem, you can also view the video here.
Posted by Earl J. Woods at 1:38 pm 1 comment: