The Legion of Super-Heroes, a DC comics superhero team first introduced in 1958, will be relaunched later this year. The concept is pretty simple: a thousand years from now, a group of super-powered teenagers, each with a unique ability (with some exceptions) and hailing from different worlds of the United Planets, protects the galaxy from all manner of strange threats.

With more than 60 years' worth of stories, the Legion is infamous for its tangled continuity (featuring multiple reboots), storylines that range from the ridiculous to the sublime, a dedicated fandom, and one of the largest rosters of characters in comics at nearly 100--not counting alternate versions from parallel universes and reboots.

As you might imagine, I'm a big fan of the Legion, having first stumbled across them during the early 1970s on the spinner rack of the drug store at Leaf Rapids, Manitoba. I was wowed by Mike Grell's art, the colourful costumes, and the Star Trek-like environments and spaceships.

But it was the characters that drew me in: their distinct personalities, interesting power sets, and personal relationships. And while I appreciate each Legionnaire, some became favourites over the years. After much consideration, here are my dozen favourites, in no particular order: 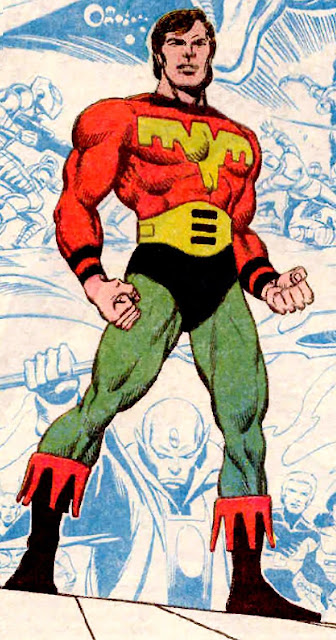 Ultra Boy (Jo Nah, planet Rimbor)
Ultra Boy has the entire range of Kryptonian powers, but he can only use them one at a time by shifting around his "ultra energy" to fuel one power or  another. This makes him almost as powerful as heavyweights like Superboy, Supergirl, and Mon-El, but with a really interesting limitation. He also has an interesting backstory: he grew up on a very rough-and-tumble world, but transcended his hardscrabble life to become a hero. He's sometimes been portrayed as a bit of a loveable lunkhead, but other stories play this off as a affected personality trait Jo uses to encourage enemies and teammates alike to underestimate him.

Phantom Girl (Tinya Wazzo, planet Bgztl)
Tinya Wazzo is a daughter of privilege from planet (sometimes dimension) Bgztl, where everyone exists as immaterial phantoms. Tinya can phase from solid to immaterial form, giving her the ability to walk through walls, reach inside bodies, and so on. Despite (or maybe as a reaction to) her upbringing, Phantom Girl is one of the most down-to-earth Legionnaires, serving as best friend to many other of the Legion women. 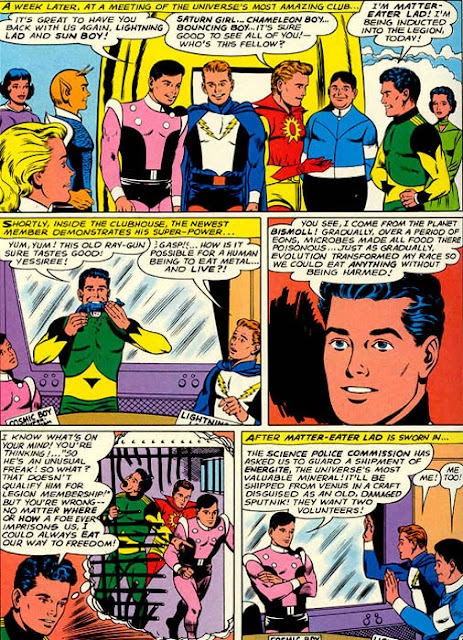 Matter-Eater Lad (Tenzil Kem, planet Bismoll)
Matter-Eater Lad can eat anything; that's it. He's the Legion's comic relief and knows it, but he's saved the team's bacon on more than one occasion. His Legion career was interrupted a couple of times: once because he ate the Miracle Machine to save the universe and the act drove him temporarily insane, and once because he was drafted by his home planet to serve as a senator. 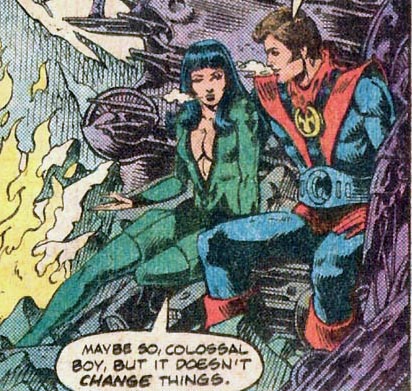 Shrinking Violet (Salu Digby, planet Imsk)
Shrinking Violet is a formidable martial artist who can shrink to subatomic size. At first depicted, as her name suggests, as a shy wallflower, over the years Salu gains confidence to match her abilities. She's also an early LGBTQ+ character, though it took creators a while to make that characterization overt. 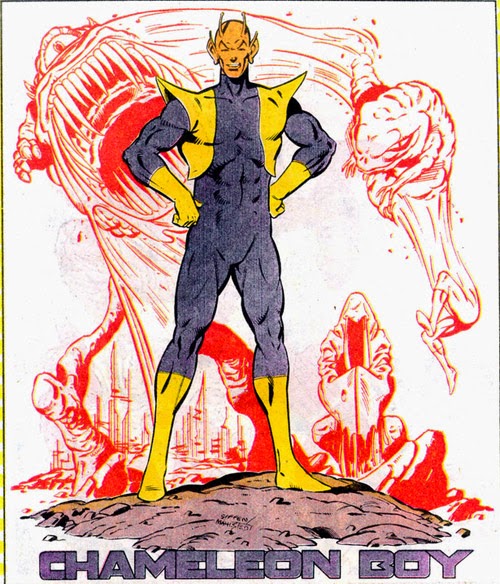 Chameleon Boy (Reep Daggle, planet Durla)
A shapeshifter, Reep leads the Legion Espionage Squad (which also includes Phantom Girl and Shrinking Violet) and often serves as the team's voice of reason and caution. Over the years, artists and writers have given Reep a pretty interesting range of transformations, from tiny insects to monstrous beasts, depending on need. 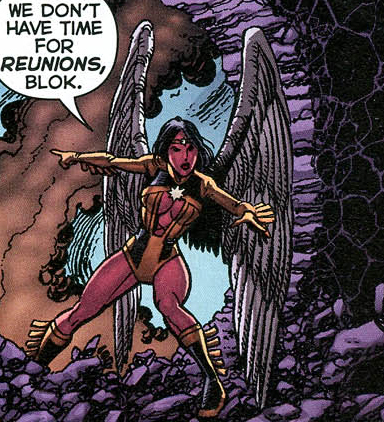 Dawnstar (Dawnstar, planet Starhaven)
While some argue, with justification, that Dawnstar is a racial stereotype--she's of American Indian descent, with tracking abilities (and the ability to survive in outer  space and fly faster than light) and a buckskin costume--I can't help but enjoy her somewhat icy, curt personality, which serves as a nice contrast to the "aw shucks" contingent of the team. 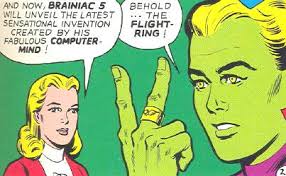 Brainiac 5 (Querl Dox, planet Colu)
A "12th level intelligence," Brainiac 5 is the team's resident mad (sometimes literally) scientist, inventor of the flight ring that each Legionnaire wears and the impenetrable force field (which for some reason he doesn't share with the team, with one notable exception). Querl is moody, aggravating, passionate, and brilliant, qualities that drive his teammates from extremes of admiration to annoyance. 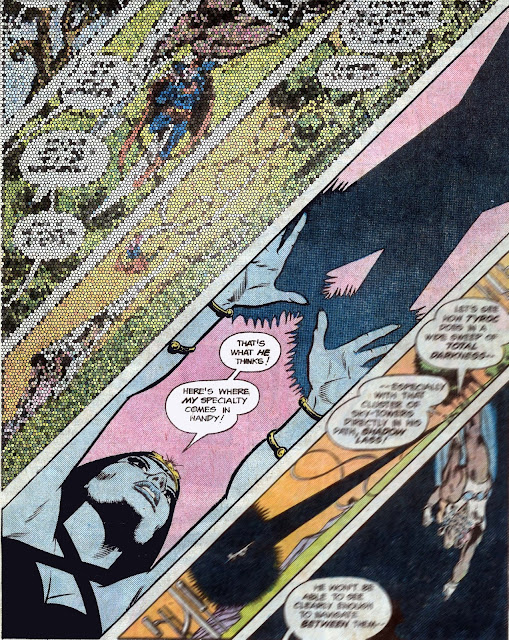 Shadow Lass (Tasmia Mallor, planet Talok VIII)
Born and raised as a planetary defender, Tasmia is a formidable warrior with the ability to cast impenetrable shadows, an interesting area-effect distraction she's used time and again to befuddle foes. Haughty but loving, she forms only a few close relationships with other team members, but those few bonds are unbreakable. 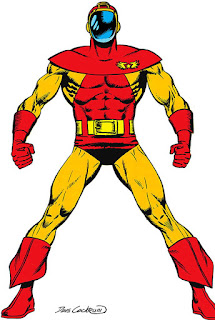 Wildfire (Drake Burroughs, planet Earth)
His body destroyed by an accident that transformed him into "anti-energy," Drake Burroughs exists bodilessly in a containment suit, through which he can release bursts of anti-energy or all of that energy at once in a tremendous explosion. Drake has the personality of the arrogant jock he once was, tempered by the tragedy of his existence. 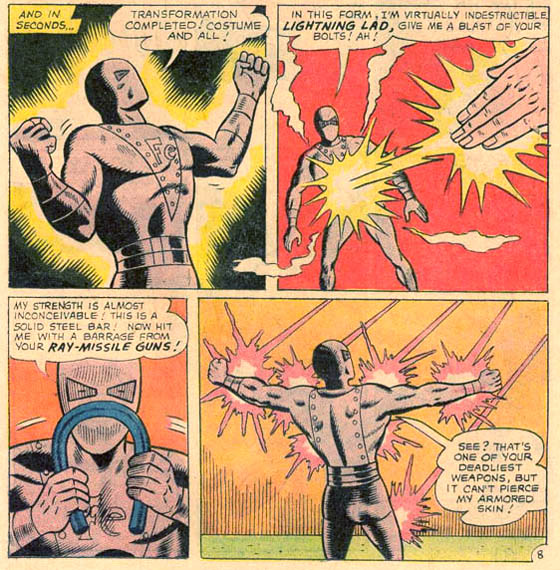 Ferro Lad (Andrew Nolan, planet Earth)
A mutant with disfigured features and the ability to transform his body into living iron, Ferro Lad is perhaps best known for being one of the first and few character deaths that stuck. During his brief time with the Legion, Andrew was well-loved for his bravery and loyalty, traits magnified by his heroic sacrifice saving Earth from the dreaded Sun Eater. 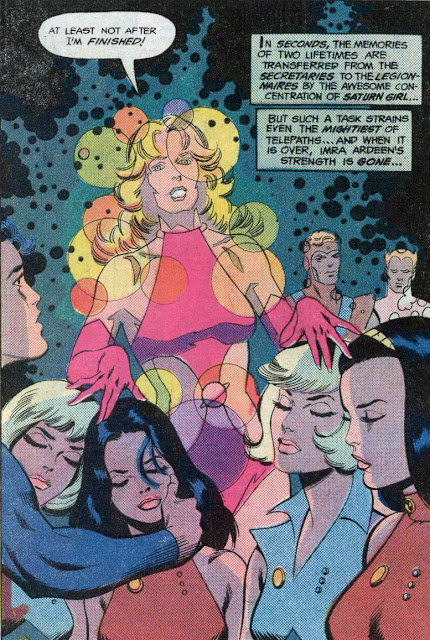 Saturn Girl (Imra Ardeen, moon Titan)
One of the Legion's founders, Imra Ardeen is a powerful telepath from Saturn's moon Titan. Reserved and sometimes (unfairly) seen as somewhat cold, Saturn Girl was one of the first Legionnaires to marry and have children, roles that have given her some added dimension over the years. 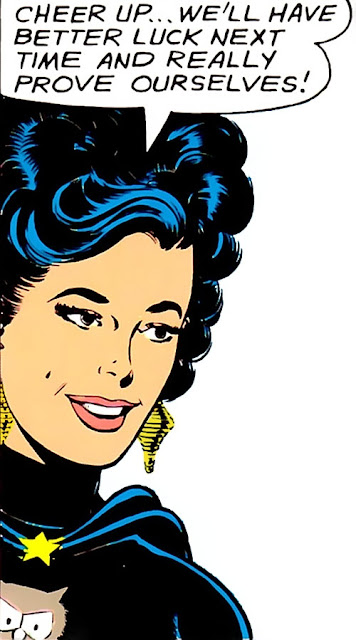 Night Girl (Lydda Jath, planet Kathoon)
Lydda is super-strong UNLESS she's in direct sunlight, a limitation that relegated her to the Legion of Substitute Heroes for years. But with a can-do attitude and breathless optimism, she proved herself time and again to eventually join the Legion proper.

That Shadow Lass page has some weird artifacts. It is supposed to look like that? Or is it just rendering weird for me in Chrome? I checked in Firefox and got the same thing. Upper left looks like it's double-halftoned or something, and maybe stretched or skewed; central diagonal with her in it looks OK; bottom right 2 diagonals look blurry.

Those are Photoshop filters, or I'm Ben Kenobi's footstool. (What a strange thing to say, but it does mean something to me)

The top is a Mosiac, and the bottom is Motion Blur, looks like 45° or so. Why they exist, only The Force knows.

I have to admit, I like that Matter Eater Lad keeps eating despite long ago having made an opening large enough for everyone to escape.

Ok, if they're Photoshop filters my question becomes Why?