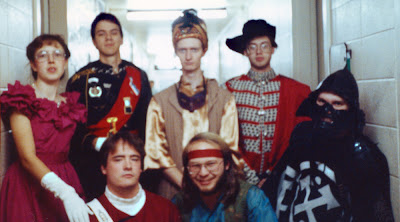 Members of the University of Alberta Star Trek Club celebrate Halloween 1990. Taken just outside my dorm room at 139 Kelsey Hall, U of A.
While watching AMC's The Walking Dead this Halloween night, it occurred to me that only in parodies and comedies of science fiction, fantasy or horror stories do the characters show any familiarity with the dangers they face. They possess no genre awareness.

If you or I suddenly woke up to find that vampires, werewolves, or zombies were running amok, we'd be terrified - but we wouldn't be ignorant. Decades of books, television shows, movies, comics, even stage plays have shown us how to respond. Everyone in the Western world knows that you kill werewolves with silver bullets, vampires with a stake to the heart, zombies with a bullet to the brain.

On The Walking Dead, the protagonists discover how to kill zombies only by accident. They don't even use the word "zombies;" they call the living dead "walkers." It's as if they grew up in a world without George Romero and Night of the Living Dead, or even the works of Max Brooks, author of The Zombie Survival Guide.

We see this over and over again in dramatic genre fiction. An unprecedented catastrophe occurs, and none of the main characters seem to have ever read a science fiction novel or seen a horror movie. If the heroes only had a little genre awareness, they'd be far better prepared to tackle whatever outrageous genre problems facing them. There would be no need to learn by deadly experience, to lose redshirts or other cannon fodder in the early hours of the catastrophe.*

Years ago, I mused about the possibility that writers and other creative types don't actually create anything, that they are in fact merely tapping into parallel universes with some as yet undiscovered sensory organ. Some friends of mine hated this idea, with good reason - it does, after all, destroy the idea of the human imagination - but I thought it might make a pretty good hook for a story or two...stories I haven't written yet, of course.

But during The Walking Dead's opening episode tonight, I remembered my idea and thought to myself, perhaps there's even more going on here than I originally speculated. Perhaps writers and directors and painters are somehow inoculating our world against such horrors merely by bearing witness to the awful things that happen on other Earths. Think about it: if Earth is ever faced with an alien invasion or a zombie plague or body snatchers that take over our loved ones, there will be millions of people who know how to deal with the problem from the first moment, because they've seen or read all the solutions already. In the face of that vast pool of knowledge, perhaps genre threats have declared our world, the "real" world, off-limits. If you were a vampire, would you set up shop here? You wouldn't last a week before a gang of garlic-wearing teenagers were water-bombing your crypt with holy water.

So here's to the dreamers, those who see beyond our reality into other worlds more terrifying than our own. Perhaps their dark visions have protected us from the lurking terrors that stalk the many universes, beasts and madmen that move on to other, less imaginative worlds...

*Of course the real reason protagonists lack genre awareness is because professional writers know it would be tiresome to begin each and every story with their characters talking about how "they saw this exact situation on TV!"
Posted by Earl J. Woods at 10:34 pm

Or, more generally, if they already have half the problem solved, half the conflict is removed.