One Last Shot at Redemption: Theodore Judson's Hell Can Wait 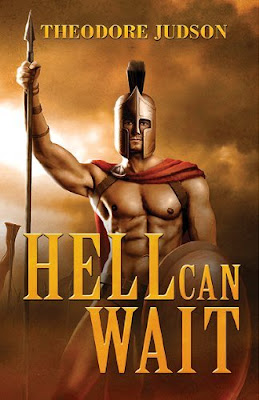 Hell Can Wait is less layered and intricate than Fitzpatrick's War or The Martian General's Daughter, but it's also more hopeful.This is the tale of Maternus, a Roman soldier who spends centuries in Hell before being granted one final chance at salvation. Given the ability to read, command of the English language, and a set of tests to pass, Maturnus is thrust into 21st-century Colorado to learn how to control his violent rage and nurture the spark of empathy that gained him this final opportunity in the first place.

An angel, Mr. Worthy, and a demon, Banewill, follow Maturnus' progress, one hoping for the Roman's salvation, the other for his damnation. Long-suffering Banewill knows the odds are against him - after all, good always triumphs over evil in the end - but he gamely does his best to keep Maturnus in hell by increasing the difficulty of the Roman's challenges. Worthy agrees, perhaps because gaining entrance to Heaven shouldn't be easy.

The tasks? Maturnus must, for example, help love blossom between a bullied, overweight, introverted nerd and the most terrifying girl in school. He must help a bitter old woman find happiness in her dying years. And he must play the matchmaker between a forty-something eccentric and the librarian who's infatuated by the loser's best friend, a handsome poet. And all the while, Maturnus dreams of Maria, a slave girl he encountered just once, a girl who impressed him with her bravery, a girl who fanned the flames of Maturnus' inherent decency.

Maturnus is a smart guy, but his ancient background leaves him somewhat at sea when navigating 21st-century societal norms. His manner is blunt, but never deliberately unkind, and his status as an outsider helps him cut through the nonsense of modern human interaction to help people discover their own true worth. In seeking out his own redemption, Maturnus helps others find theirs.

Judson's dry wit and keen observational humour permeate the novel. Despite the high stakes, this is a very funny book. I laughed aloud at several passages, an uncommon experience for me. At one point, Maturnus goes out to the movies with his friends. Although not stated explicitly, it's clear they're watching Zack Snyder's 300, and Maturnus' reaction to the film is both amusing and a sly commentary on modern tastes.

Judson uses humour to underscore his main theme, the possibility of redemption for all, even those previously cast down to hell. In Judson's mythology, damnation and redemption are fluid; just as in life, good actions and bad in the afterlife earn reward and punishment. But on balance, the architects of the universe clearly favour forgiveness. Though people have their faults in both life and death, one is left with the impression that in the ultimate end, everything works out all right. It's an uplifting message for an uncertain era, especially coming from an author whose previous works have documented the slow decay of human civilization.

I'm frustrated that Judson hasn't found the commercial success or widespread acclaim he deserves. His characters are rich, his storytelling compelling, his prose straightforward but smooth. I'm grateful that Edge has given Judson another chance to succeed, and I highly recommend Hell Can Wait to anyone who enjoys science fiction, fantasy, or romance.
Posted by Earl J. Woods at 12:04 pm

That is awful, awful cover art.

I like the art and design just fine, but whatever your feelings about the art, don't let that stop you from enjoying the work between the covers! It's worth the purchase.

Looking at this makes me realize that I don't much read pure fiction any more.