Ready Player One: An Ode to the 80s 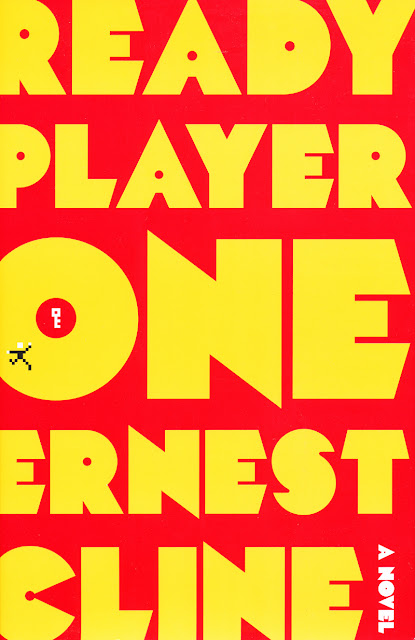 Born in the sixties, a child of the seventies, I came of age in the eighties. If you too were a teenager during the Me Decade, Ernest Cline's Ready Player One will resonate. Cline's first novel is heavy on charm and pop-culture references, if light on powerful prose; it is nonetheless charming and yet cautionary.
When I recall the 80s, I remember the bloops and bleeps and disco beats of one of the dozen video arcades strewn across Leduc, Alberta. I wasted many hours and many quarters evading the ghosts of Pac-Man, blasting away at the alien Space Invaders, rescuing humanoids in Defender and Stargate, running down pedestrians in Death Race, defending my cities in Missile Command and all the while getting distracted by teenage girls with big 80s hair in painted-on jeans. At the same time, I was learning how to program in BASIC on my Atari 400 computer, listening to Journey, Kool and the Gang and the Tubes and playing Dungeons and Dragons with my friends. At the movies I marvelled at Tron, the Star Trek films, Return of the Jedi, Aliens, Valley Girl, Weird Science, Buckaroo Banzai, Terminator, Big Trouble in Little China and The Thing, not to mention the teen angst comedy-dramas of John Hughes. Our family never owned an Intellivision or an Atari 2600, but my friends certainly did, and we whiled away long afternoons playing Adventure, Discs of Tron  and Yar's Revenge.

Cline's novel is set in the near future, but draws upon all the 80s touchstones I listed above - and more - to form its nostalgic narrative. In the year 2044, most of humanity lives in poverty. Both the environment and the economy are a catastrophic mess. Many people, at least in the developed nations, have just enough money to lose themselves in the OASIS, a kind of super-Internet virtual reality system that serves as both promising educational tool and dangerous diversion for the lower classes (and in this future, virtually everyone belongs to the lower class). OASIS creator James Halliday, a sort of Bill Gates/Steve Jobs amalgam, dies and leaves his vast estate to whoever can solve the ultimate video game, an epic adventure that requires contestants to navigate a perilous virtual world.

Wade Watts is a plucky but poor adventurer, an orphan with nothing to his name but a cheap virtual reality rig, a few credits and an encyclopedic knowledge of 80s pop culture - and lucky for him, too, for Halliday, like me, was a teen in the 80s and was profoundly influenced by the pop culture of the era. With no realistic options for improving his lot in life, Watts joins the great game and through a combination of research, skill and luck manages to uncover the first clue to unlocking the mystery of the game. But doing so puts him at odds with a sinister multinational corporation bent on subverting OASIS for its own greedy ends, and they'll stop at nothing - not even murder - to be first to complete Halliday's quest...

Cline's novel is really a tale of two worlds: the technological video-game utopia of OASIS and the run-down urban nightmare of 2044. With money and net access, people can enjoy wonders such as flying their own X-Wing fighter to new worlds or transforming into a giant robot to fight other giant robots. You can even attend a first-class virtual public school, thanks to Halliday's generosity and vision. But what you can't do is help change the real world, a world that is winding down in the background as people devote more and more of their lives to the facile pursuits of a virtual world. While most of the action occurs in the OASIS, important segments of the narrative thrust Watts back into the real world, and each visit heightens the stakes of Wade's virtual actions. If he doesn't win the game, he'll live out his life as a poverty-stricken fugitive with no hope for a better life. But even if he does win...what then?

Ready Player One doesn't answer that particular question, implying that even a nest egg of billions and a pure heart full of good intentions may not be enough to repair the damage humans have wreaked upon the world. But it is, nonetheless, a novel full of hope. While there are antagonists, most of the characters, even the rich ones, are good people trying to do the right thing; it's the situation that's bad, not the actors. Thus there is a glimmer of hope that maybe, just maybe, there's a chance the world can be redeemed. There's even a teenage romance echoing the themes of those old John Hughes movies.

More than a simple 80s homage or adventure story, Ready Player One asks important questions about personal responsibility, self-image and identity and all the possibilities, both good and bad, open to an evolving human culture. Highly recommended.
Posted by Earl J. Woods at 5:16 pm

I may have to check that out. I was one of the big haired girls with painted on jeans. Laying on the bed sucking it in trying to get them on....and just when you could breath again put them in the dryer to shrink them again.

That pic is hilarious, amazing how loud the fashion was back then. I had lime green, pink, black and white, royal blue jackets and earrings. I got perms to make my already curly blonde hair even curlier ala poison.

One of my co-workers loves all the Hughes movies, they are sentimental for him. I never was exposed to video games other than pac-man. We used to go out to Fort Saskatchewan on date nights cuz they had computerized bowling lanes. OOOhhh..exciting stuff.

Thanks for sharing the memories and pic, brings back lots of great thoughts of my being a teenager in the 80's.

I loved this book, and felt like it was written just for me with its movie and game references. The revelation that the first quest is set in a virtual version of an infamously fatal D&D module was absolutely delightful, especially with the climactic Joust.. The dystopian future painted for us, coupled with the references, made the book feel like a young adults novel written for children of the 80s who just never bothered to grow up, which suits me right down to the ground!

Being a child of the 80s, weaned on TRS-80s, the HHG to the Galaxy, and Monty Python, I should have liked this book. Instead, the main character came off as boastful, cold, and shallow, constantly rattling off the 100s of hours he logged playing popular 80s video games and re-watching bad 80's movies. The nostalgia does not merit a plod through poor writing and unsympathetic characters.

It has a unique storyline but was easy to follow. The characters are well drawn and you care about them. Really keeps your interest. Highly recommend, I am not a gamer but I thoroughly enjoyed reading this book.