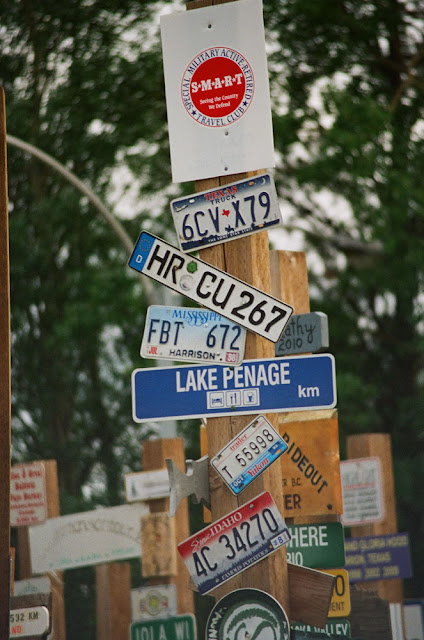 He awoke early; the Midnight Sun phenomenon made it difficult to sleep in any case. Full of anticipation, he packed his things and set out for Watson Lake's famous Signpost Forest. 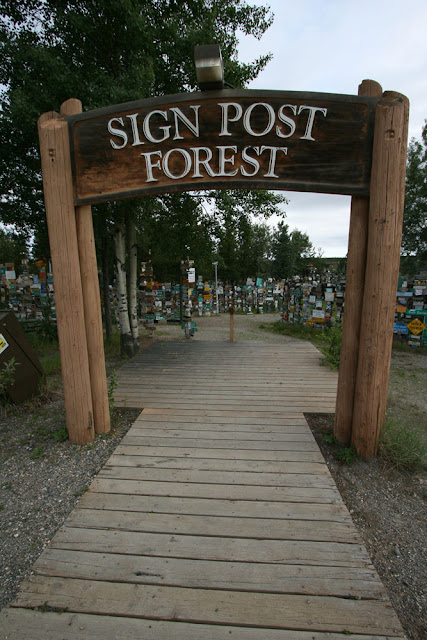 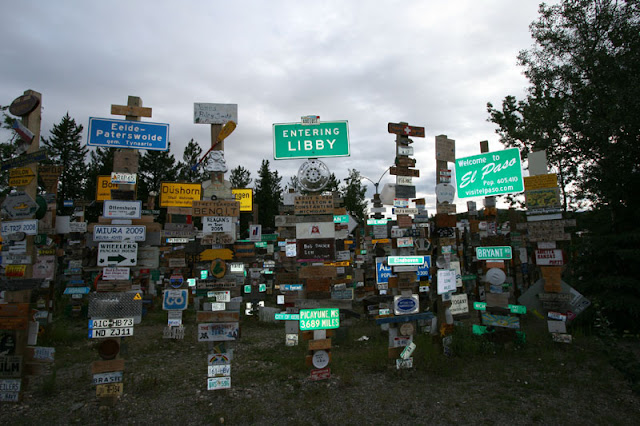 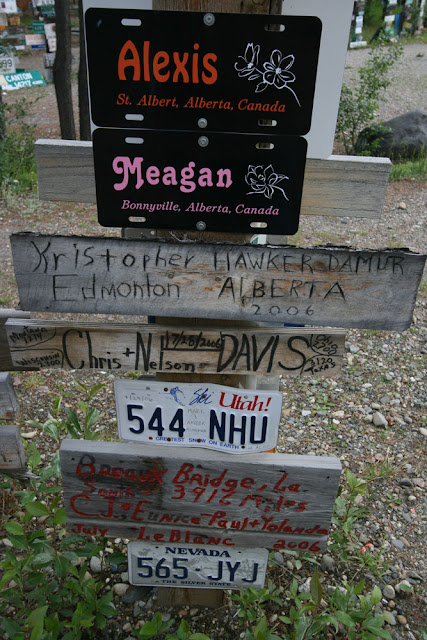 Belatedly, he realized that he'd missed the point of Signpost Forest: to bring your own sign and join the community of wandering souls who passed through this lonely outpost. But he spotted a sign from Edmonton, and imagined his contribution irrelevant. 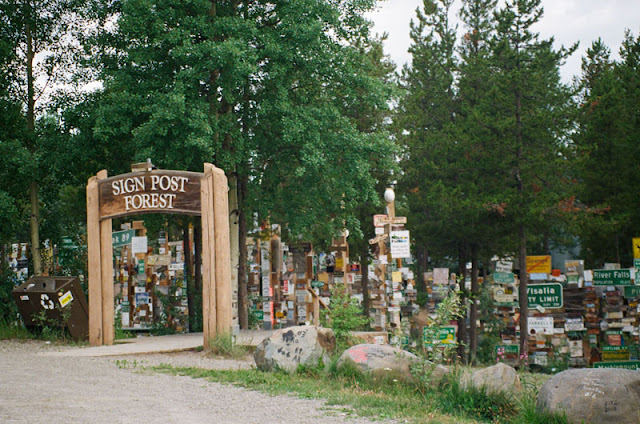 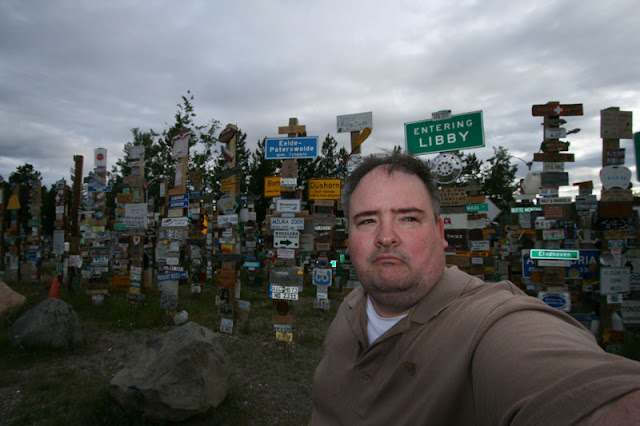 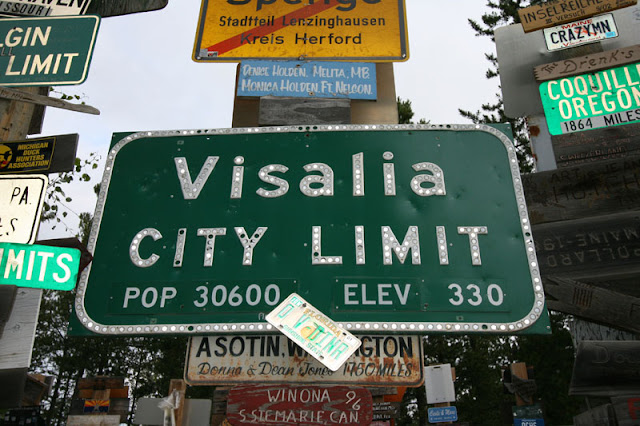 In truth, he felt a little underwhelmed. The collection was haphazard, the location seemed an afterthought; he'd somehow been expecting something a little grander. Perhaps it was only the greyness of the day. He packed up his camera and moved on. 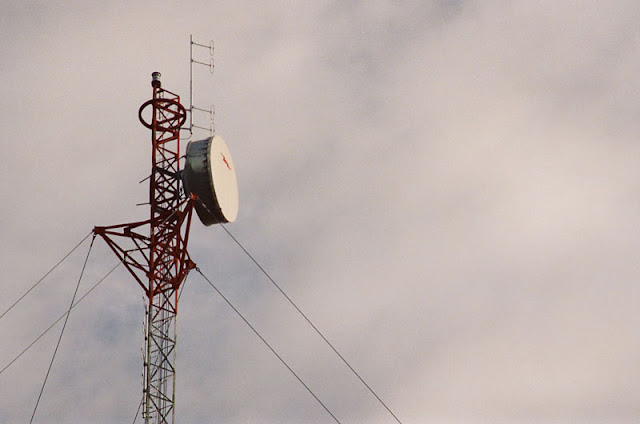 Soon he noticed the top of a radio tower poking above the treetops ahead. Such towers were ubiquitous in northern Manitoba, and he'd always wanted to stop and take a closer look. He pulled into the gravel road leading to the tower, surprised to see another vehicle already there. It was an old suburban, with no evidence of driver or passengers. Disturbingly, a discarded sandal lay in the dust and stones nearby. Macabre Hitchcockian  scenarios flashed through his mind, but he dismissed them and focussed instead on his photographs. 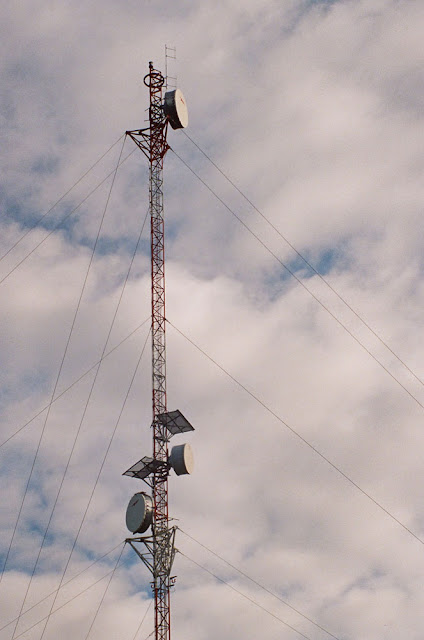 The unchanging nature of these towers brought a fresh wave of nostalgia. These gently humming sentinels seemed somehow timeless; they wouldn't have been out of place, he thought, in one of the early Dark Tower novels of Stephen King, when Roland wandered through a world that was winding down. 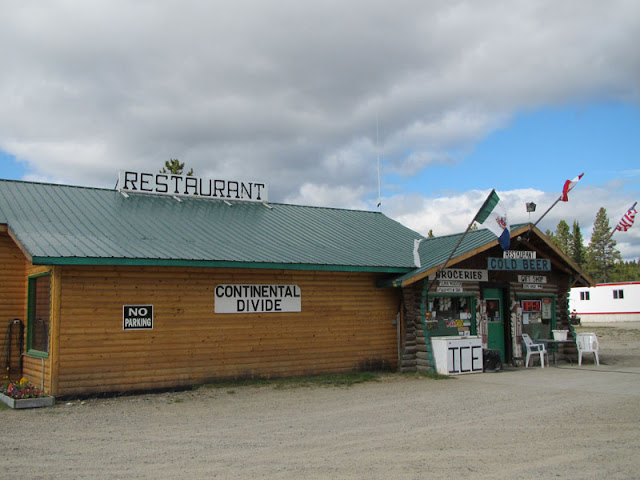 He stopped for breakfast at a tiny roadside lodge, the Continental Divide. He'd seen many such lodges so far, half of them abandoned, turning roadside signpost promises of food, gas, lodging into empty lies. But the food was good, the operators friendly, eager to hear about where he'd been and where he was going. The owner himself took payment for breakfast, and revealed that he'd left employment with the City of Edmonton years ago to settle here, in the Yukon. Earl wondered how many northerners came simply to escape the frenetic pace of southern metropolises. 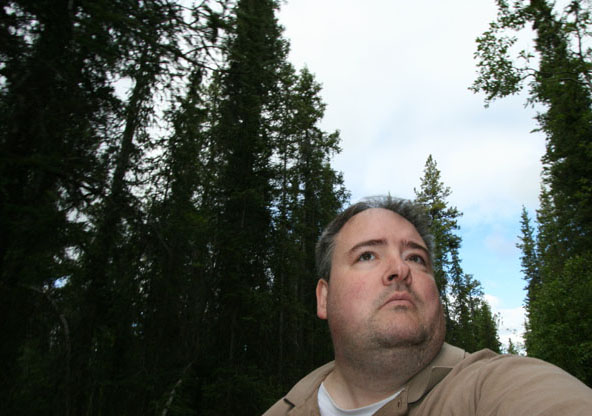 Stopping to explore a little-used park, he wandered down a forested path for a good half-hour just to enjoy the quiet murmur of nature. A sign warned that he was in bear country, and he felt some apprehension; what a silly thing it would be to die here alone, he thought. But he felt as though no such calamity could touch him there, in that moment. He was right...at that moment. 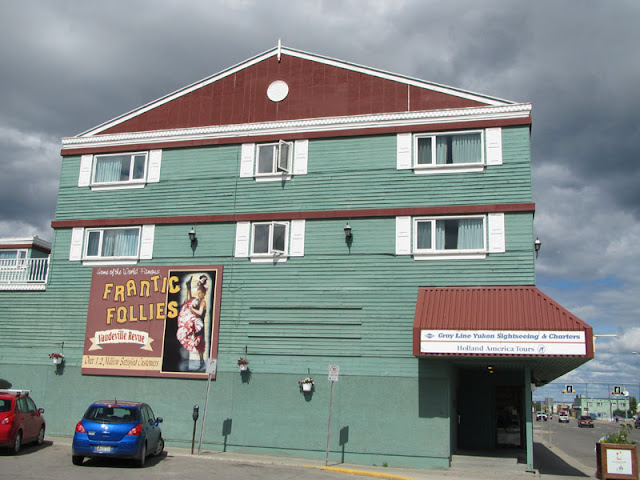 He arrived in Whitehorse around lunchtime, July 3, a Sunday. He stopped only for lunch, gasoline, and to call his distant wife - they were further apart now than they had ever been, and yet the miracle of the telephone and text messages made him feel as though she were only a heartbeat away. 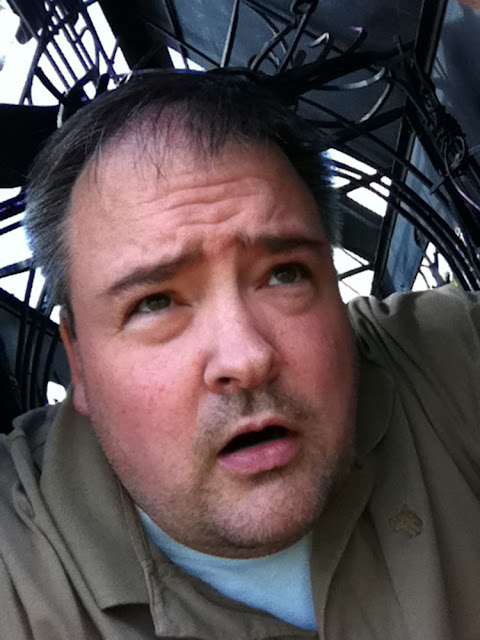 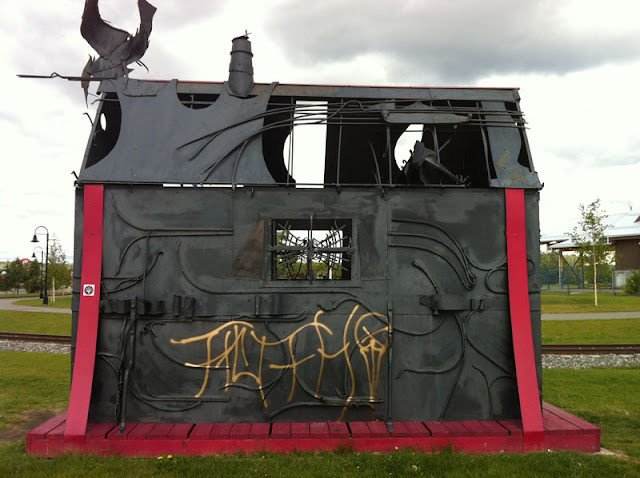 At first glance, Whitehorse was lovely, but time pressed on, urging him forward. He wanted to be in Fairbanks on the Fourth of July, to see the pageantry and excitement of the American holiday. He could explore Whitehorse at his leisure on the way back, he thought; Whitehorse, and the train trip down to Skagway, which was not to be missed. Those activities could wait a few days; for now, the road beckoned.


The trip from Whitehorse to Port Alcan showered him with an embarrassment of majestic sights. He wished he were a more accomplished photographer, that he might capture these incredible vistas of aqua-blue lakes and towering mountains and endless green forests of birch and pine. He could only do his best and hope that his amateur efforts could at least serve to trigger the vastly superior images captured by his mind. 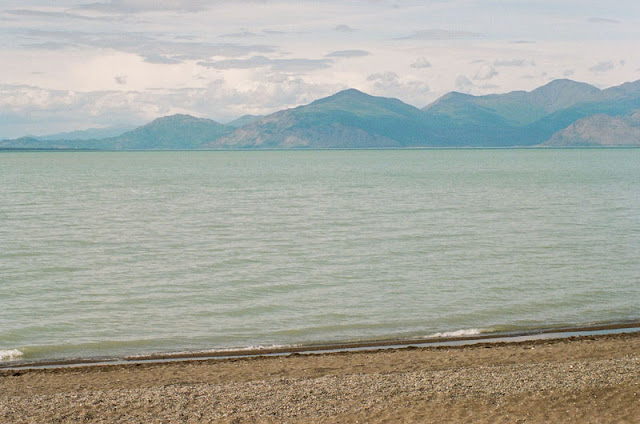 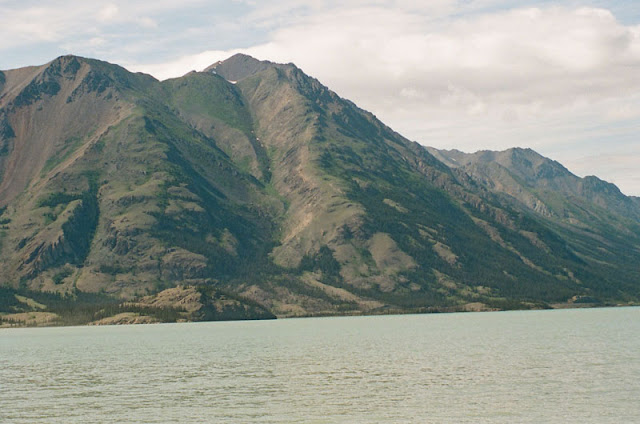 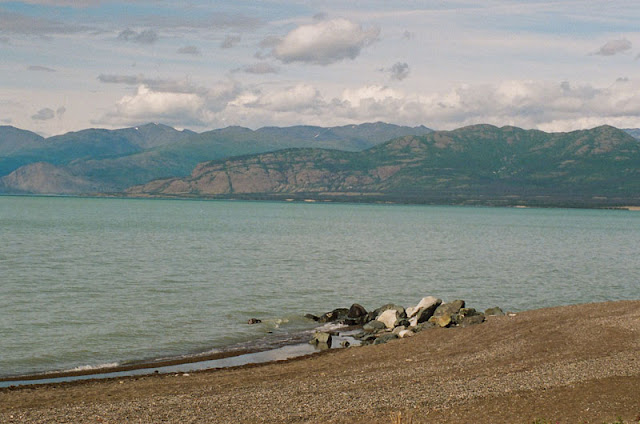 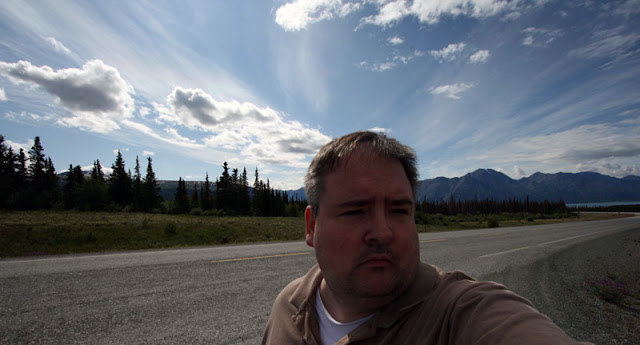 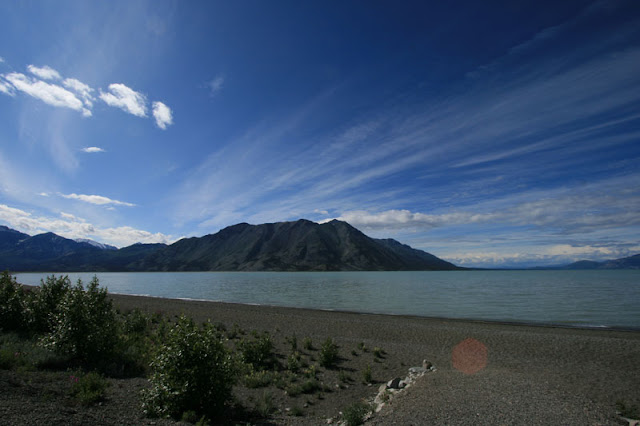 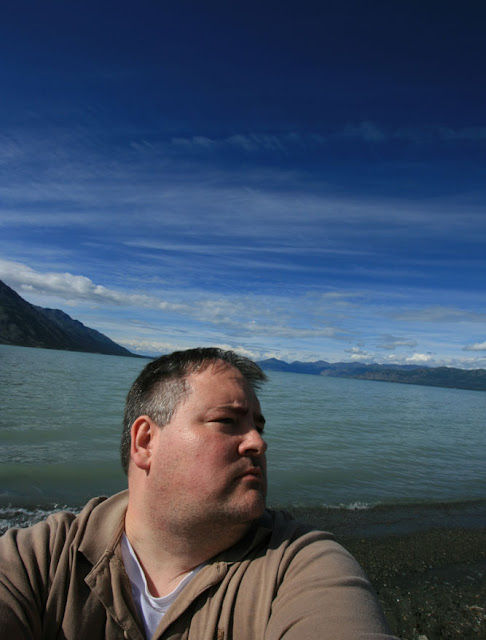 He felt himself beginning to truly relax, to allow the stresses of middle age to retreat into safer corners of his mind. Here he felt the potential for an interlude of peace. 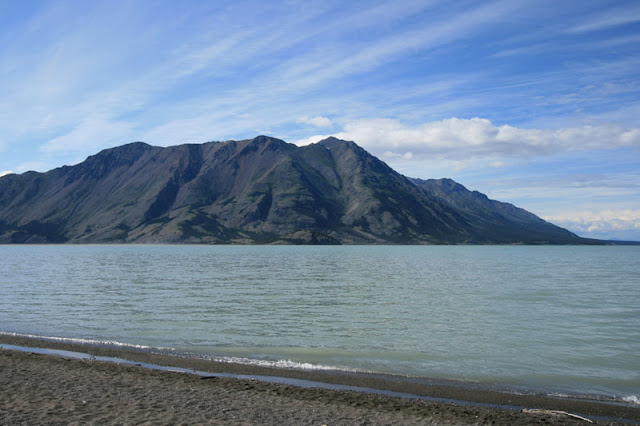 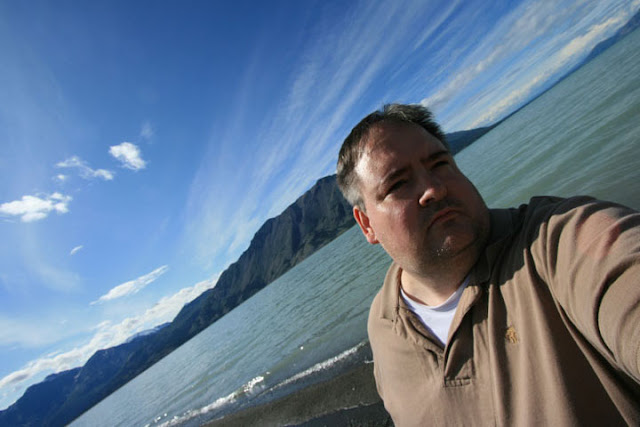 Time and the road rolled on beneath his spinning wheels, his tires devouring both. He felt no fatigue, not yet, just a desire to soak up the beauty that surrounded him and to reach the border before the fourth. And that he did. 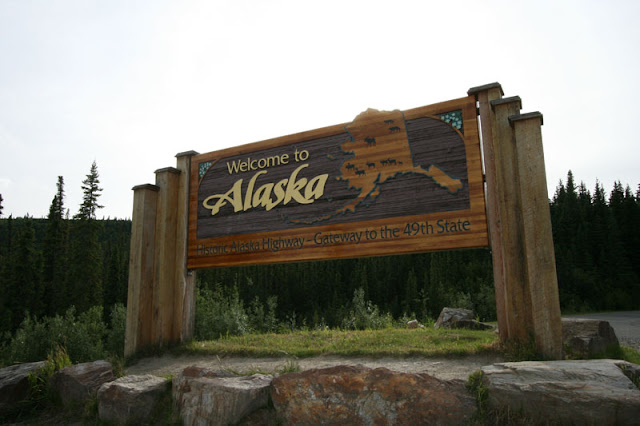 He was surprised to learn that the border itself lay to the east of the customs station, allowing tourists to pause and contemplate the political divide without worrying about what they needed to declare or if they'd remembered to bring their passports. He found it humbling to stand upon the imaginary line that divided nations, a line defined by politicians and diplomats generations ago, a line marked only by a couple of signs, a stone cairn, and a cutline through the trees. 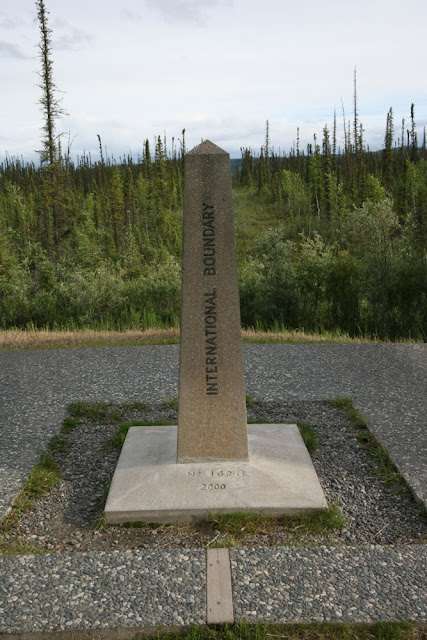 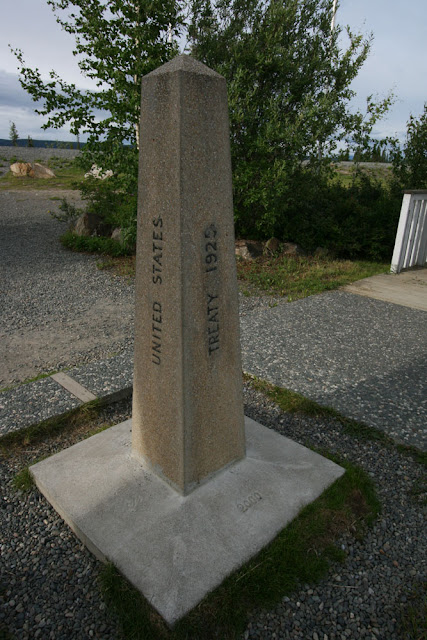 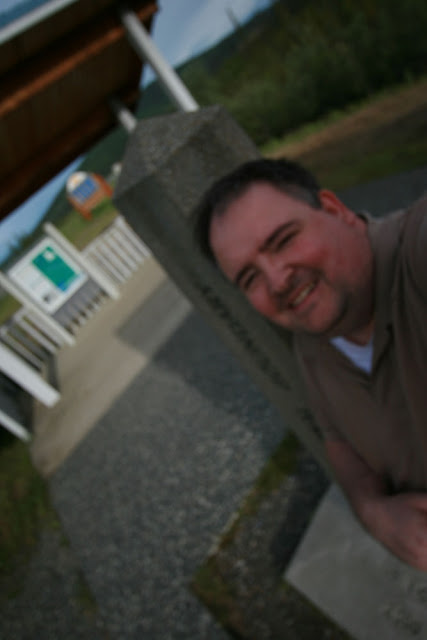 It was like a totem, he thought, respected by all tribes, a dividing line crafted and maintained through reason and compromise. The unguarded territory inspired hope and optimism, thoughts that perhaps one day even the customs barriers would be unnecessary, that one day borders themselves would dissolve as the human family finally united.

Moments such as these never last. He moved on once more, passing through border inspection with little more than a dozen words. Fairbanks beckoned.
Posted by Earl J. Woods at 12:13 pm

I wonder if perhaps the signpost forest was something that happened naturally/organically as a tradition of travellers and only became institutionalized later, hence the haphazard nature.

Quite possibly - I'll have to read up on its history.