THIS REVIEW CONTAINS MAJOR SPOILERS FOR STAR TREK (2009). DO NOT READ THIS REVIEW UNTIL YOU SEE THE FILM (unless of course you have no interest in seeing it). 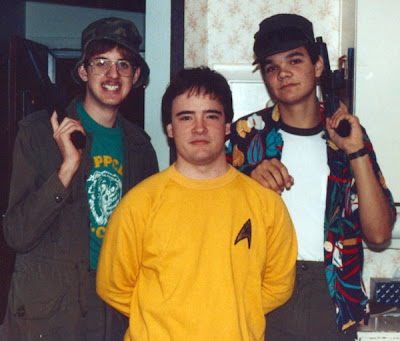 Every lasting mythology needs reinvention. That includes popular culture. The stories of Tarzan, Sherlock Holmes, Dracula, Superman and others have been reimagined by dozens of different writers, artists and actors across the decades. And yet, whether played by Johnny Weissmuller or Rony Ely, whether written by Edgar Rice Burroughs or Philip Jose Farmer, Tarzan remains instantly recognizable as Tarzan. Any child or senior citizen can identify any photo or drawing of Superman, no matter the artist or actor.

For a long time, Star Trek was a curious exception to this phenomenon; Shatner's Kirk, Nimoy's Spock, Kelley's McCoy and all the others seemed to lock actor and character together, seemingly forever. The story of Kirk's Enterprise had a beginning, a middle, and an end, and instead of reinvention, sequel series, some of them very good, others mediocre to awful, were created. Of all the figures in the Star Trek stories created by Gene Roddenberry and his inheritors, it has always been the original crew who had the best chance of making the leap from short-lived pop culture phenomenon to enduring mythology. A mission of exploration, a heroic leader, a shamanic outsider, an emotional, everyman healer, their stalward companions, each a recognizable ethnic and character type - these are the perfect elements for the kinds of myths that could be told and retold for hundreds of years.

Until now, however, Star Trek's endurance was by no means a sure thing. I believe, for all its flaws and all its merits, JJ Abrams' new Star Trek film is the key to giving these characters the same longevity as other, earlier figures of popular culture.

The film is brash, gorgeous, and most of all, fun. The plot is driven too much by coincidence and some laughable science (the vastness of the universe seems about the size of a modest backyard, given the travel times), but if these hiccups are overlooked (and many audience members won't even notice), Star Trek is the kind of movie that people will see more than once in theatres - and in these days of DVDs and downloads, that's a rare thing indeed.

The film's greatest strengths are its loveable characters, engaging performances, a wry sense of humour and a powerful emotional core.

Every actor delivers a note-perfect performance.

There are no mocking imitations here of William Shatner's often-parodied line delivery; Chris Pine's Kirk is utterly, believably the hero we grew up with, cast in a new guise, with a new attitude, but still Kirk to the core.

Zachary Quinto shows no trace of Sylar (his villainous role from television's Heroes); rather, he gives us a new interpretation of everyone's favourite Vulcan, a Spock under desperate new circumstances, a situation Nimoy's Spock never in his worst nightmares had to face.

There are moments when Karl Urban's turn as Dr. Leonard McCoy seem to draw upon the spirit of DeForest Kelley himself; I'm not a believer in the afterlife, but when watching the character's introduction, I felt Kelley's approving presence manifesting itself within McCoy's new actor. It was eerie and comforting and wonderful, and I hope Urban/McCoy is given more screen time in the sequel. It's been too long since this character's humanizing touch has been felt.

Zoe Saldana's Uhura is smart, compassionate and tough - at last, a story in which this too-often-underused character makes a real difference, and has an emotional arc of her own.

John Cho's Sulu is less developed due to limited screen time, but an actor better known for light comedy definitely shows great potential here as the swashbuckling helmsman. Likewise Anton Yelchin as Chekov, a 17 year old prodigy in this incarnation, with an incomprensible accent and a penchant for saving the day.

Simon Pegg as engineer Scotty was the one casting choice that made me think "Cool!" and "Oh no!" at the same time. I wasn't sure if the hero of Sean of the Dead and Hot Fuzz would make a convincing miracle worker, but Pegg nails it with a lighthearted performance that neatly sidesteps cliche, if only just.

Bruce Greenwood as Captain Pike plays a pivotal role as inspiration and mentor - the kind of guy you'd want to follow into the unknown. And Eric Bana's Nero is sufficiently desperate to provide the film's necessary menace.

My favourite performance, though, was that of Leonard Nimoy as the elder Spock. Nimoy shows us that Spock has grown even wiser in the years since we last saw his character (chronologically, in a two part episode of Star Trek: The Next Generation, back in 1991). He's warm, brave, compassionate and inspirational, and Nimoy seems to relish stepping back into the role to pass the torch to his younger counterpart.

This is an origin story. We see the childhoods of both James Kirk and Spock, in brief but revealing scenes that capture why and how these boys grew into the mythic figures that would be admired by millions. In one of film's best scenes, a gifted but bitter Kirk gets into a horrendous bar brawl; we see his amazing potential, hindered by the tragic circumstances of his birth and flawed upbringing. But a new father figure, Captain Christopher Pike, offers a second chance in a short but inspirational speech that gives young Kirk the opportunity to realize his full potential.

"I dare you to do better," Pike says, and this line isn't just a challenge to one man, but a reflection of the Star Trek philosophy, namely that humanity as a whole should be dared to do better: to clean up our environment, to work together in peace, to reach out for the stars and keep pushing to new and greater heights. Earth is a clean, utopian world in this film as it has always been in this myth, and it became so because men like Pike - and before him, figures real and imaginary - dared their fellow citizens to do better. This is the most important message in the film, and it's thematically repeated at later points in the movie: Kirk challenges Spock, Future Spock (Nimoy) challenges Kirk, Kirk challenges the Academy, Spock challenges his unknowlingly racist peers.

I saw more than a few tears being held back at a couple of key moments in the film - the tragic circumstances of James T. Kirk's birth, and Mr. Spock's terrible loss a couple of decades later. And perhaps most of all, by Spock's father Sarek's confession to his son in the wake of that loss.

The film isn't perfect. The movie rushes to put all the character pieces in place by the end of the film, with the result that promotions that would normally take years to achieve occur in days (on the other hand, if you were presented with an Academy graduate that quite literally saved the planet Earth itself, would you not perhaps be inclined to put him in charge of a starship?). Stellar distances are compressed to the point of nonsense. And too many plot points depend upon vast coincidence (and again, the stories of Edgar Rice Burroughs are infamous for this, and yet they remain enjoyable). And if you think too hard about the strategy of the main villain, the plot falls apart completely.

But even in the face of these misssteps, Star Trek remains full of wonderful character moments, thrilling action, and gorgeous spectacle. My favourite visual in the film is that of the Enterprise rising from the clouds of Titan, with majestic Saturn looming in the backgroud. That image alone gave me a chill and a sense of wonder, something I haven't felt in a movie for some time.

With Star Trek's characters and setting recast in a fresh new light, the story of Kirk's Enterprise takes its place alongside the great 20th century myths of pop culture. The human adventure really is just beginning.
Posted by Earl J. Woods at 7:09 pm

I liked how they covered everything that didn't agree with previous Star Trek mythology with the plot premise. I agree, the McCoy character, if I closed my eyes, was DeForest Kelley onscreen.
I can't give it a 10 out of 10 because the characters are too new to override the love of the old ones, but it might come with future movies. A very promising start.

That sense of wonder is what struck me the most. That first hour, I had a goofy open-mouthed smile on my face the entire time. I enjoyed myself much more than I could've hoped for.

The film felt... big, in a good way. Big in ambition, big in scope and depth, big in visuals, big in real character development. Bigger than most of the movies after Star Trek 4. I happened to catch a piece of one of the ST:TNG films on TV the other day and I sat through Picard, Worf and Data's dune buggy escape scene.

I winced. Often. Despite the bigger budgets, many of the later movies felt like, at best, an average TV episode. J.J. Abrams' "Star Trek" feels like a feature film, one that is well worth seeing again on the big screen.

Many agree, and are saying so with their wallets. Estimates are that it will bring in $76.5 million on its opening weekend, coming in well on the high side of expectations.

Thank goodness. There will be more. I can't wait.

Now, if only J.J. Abrams would do a "reboot" of Wolverine, X-Men Origins...

A friend asked me how I would rate this movie amongst the other Star Trek movies. It took me a bit to think it out, and I wouldn't rate this movie tops. Although you spelled out the message succinctly, Earl, I didn't see it as clearly throughout all the action and angst. The success of Star Trek originates from the legacy that Gene Roddenberry started in weaving science fiction with a poignant message about current society. Who (besides Earl) can think of striving to do better when Vulcan is imploding?
Still, I enjoyed the movie, and I loved the characters. I spent the days before the movie reading how the actors prepared to step into mighty big boots of the original portrayal. The result was a success. They made me laugh and cry. This film expanded the scope of the beloved, familiar crew in new ways, but remained natural and true to their characters, even if it was suprising in a few instances.

My turn to see the movie, and I go in as one of J.J. Abrams' detractors. Hate Lost, bewildered as to why MI III even gets recognition among people I respect. J.J. Abrams started his film career very young, and now has an incredible list of screen credits. As he gains proficiency in his work, I say he also gains these two consistencies:

1) He always substitutes characters by using personalities instead.

2) He always substitutes storytelling with predicament.

By way of contrast, go look at "There Will Be Blood", which is a monumental picture driven by a supremely compelling character study, and a script that has a depth of story that goes far beyond solving Crisis A, moving on to Crisis B, and so on.

Waching the new "Star Trek", I think that's a valid enough criticism. Another would be along the lines of "who cares about criticism??"

I mean, wow, this was a fun, fun film! It has problems, it's not deep, but it sure was a great couple of hours on screen, with an absolutely spectacular, action-epic look. Reminded me of watching "Raiders of the Lost Ark" in terms of tone, more than anything. (I've seen Raiders in the theatre 36 times, but that was when it cost $1.50 to get in)

I'm still not convinced that cinema will be saved by J.J. Abrams. He's not going to make the next Citizen Kane. But he knows how to play to the audience. Looks like that's what Trek really needs right now, too.