Earl J. Woods Reports on the War of the Gurus 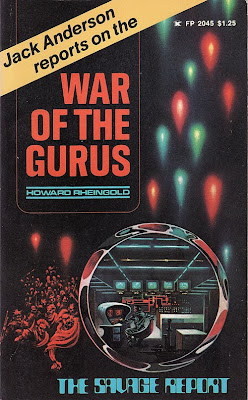 War of the Gurus is Howard Rheingold's second (and presumably final) novel in his Savage Report series. Compared to 1994, reviewed here, Gurus is a little humdrum. The copyediting has improved somewhat and the weird metaphors, awkward neologisms and hyperbolic action are still in evidence, but the proceedings this time around are somewhat laid back. The prose has gone from purple to mauve or something. Don't get me wrong, it's still insane, but Rheingold seems to have lost some steam with this installment. Of course, after the madness of 1994, what could compare?

The story takes place just a few months after the climax of 1994. Our hero, Jack Anderson, is relaxing on a tropical island when Smoky Kennedy parachutes back into his life, naked of course, bringing a new mission and some afternoon hanky-panky to start things off on the right foot.

This Report's red herring is something called TRIGGER, a kind of worldwide, interactive electronic voting system to enable all Earth's citizens to have their say on important issues - shades of the Internet. In the novel, this is seen as a transformative device that will finally allow all people of the Earth to cast off the shackles of oppression and participate in a truly functional global democracy.

In real life, when and if such a system is ever set up, it'll be used to vote for Earth Idol and share opinions on obscure 1970s science fiction novels.

Smoky reveals that a mysterious conspiracy is attempting to sabotage TRIGGER, using warring cults to...you know, I'm not entirely sure how the cult war is supposed to tie in with the TRIGGER sabotage. Something about manipulating cult leaders into starting a riot in Anaheim and there's an underground computer lab in New Jersey and Dr. Tek is behind it all (of course) except he's a hologram or a bunch of clones and Jack bites all his teeth at the same time to escape and he's caught in the explosion and everyone thinks he's dead, but aha there's an epilogue and he and Smoky attend their own funerals disguised as Jack's parents and they escape to another tropical island laughing about all the wonderful adventures they'll have and poor Eve Savage kind of sits in the sidelines and wonders what the hell is going on even though she's supposed to be this amazing media guru...hey, War of the Gurus, I didn't even catch that.

Sorry about that. The plot's a little hard to follow this time around because Rheingold isn't too big on transitions; scenes jump around willy nilly and sometimes I thought I was reading one scene only to find myself suddenly within another without any handy chapter breaks or those little squiggly lines authors sometimes use or heck, even a new paragraph. It's just like BAM, you were following Smoky a second ago but now you're in Eve Savage's studio OH BUT NO now Jack Anderson is glued to a wall and can only escape by ripping his own skin off.