The Walls Have Ears, the Doors Have Eyes

Anyone who's ever watched Star Trek has probably noticed one of the show's most influential, yet unheralded features: doors that open automatically on approach.

On the surface, this technological miracle would appear to be nothing more than a simple combination of portal and motion sensor, something we encounter every day in shopping malls and office towers. But the doors of Star Trek are much, much more; they are, in fact, sophisticated Artificial Intelligences that know when it's appropriate to open, and when they should stay firmly shut. They are, to coin a phrase, Context-Sensitive Doors. 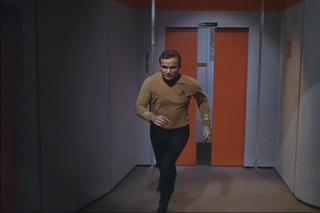 A pair of CSDs in action.

Here, Captain Kirk charges from a turbolift equipped with CSDs. Kirk's rate of speed is commensurate with the crisis he's managing, but the smart doors have no trouble opening and closing in perfect time with his passage. 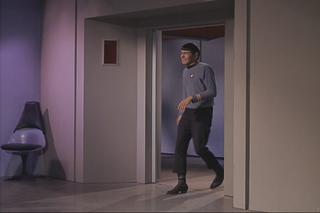 Context-sensitive doors offer a silent welcome to a distraught officer.

Meanwhile, Mister Spock must deal with an emotional crisis. Here, he emerges from a door, which quietly opens with the soft, comforting "swish" that is so identified with CSDs. 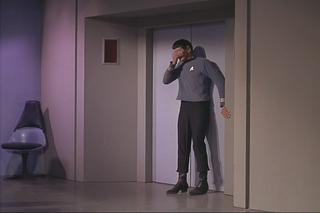 Mister Spock regains his composure - thanks in no small part to the bulwark provided by the CSDs.

Were these doors controlled via simple motion sensor, Spock's next action, pictured above, would be impossible: as soon as the first officer leaned back, the doors would open, and the stoic Vulcan would take a most undigified fall. 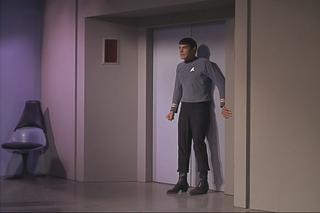 Even Vulcans get the blues, but a good set of doors at your back will bring the good times back. 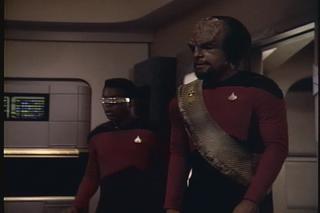 CSDs (at right) are on the job on the Enterprise-D.

Context-sensitive doors remain in active service in the 24th century. Here, we see Geordi La Forge and Mister Worf respond to a distress call. The CSDs snap open with alacrity in response to the urgency of the situation.

As we see in the following sequence of photos, CSDs are often called upon to make snap judgements. When an intruder infiltrates the ship and starts throwing your crew around, should you remain open or closed? Here's one door's bold decision: 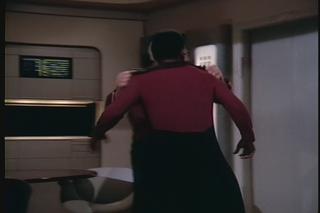 The CSD prepares to make a command decision.

The intruder, inhabiting the body of a Starfleet Admiral, prepares to throw Geordi through the doors. The doors have only a split-second to assess the situation. 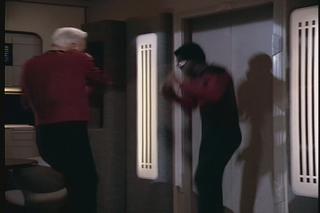 The CSD makes its choice: remain closed. The doors can absorb some of the impact of Geordi's flight, reducing the chance that the officer will be injured. But it's a choice with serious implications for the CSD, as seen in the following sequence: 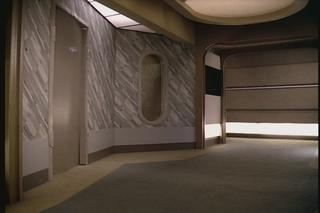 In this view from the corridor, we see the CSD bulging slightly from Geordi's impact. 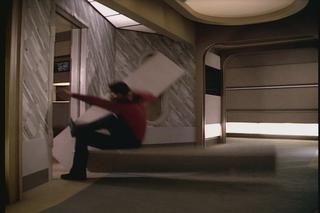 An instant later, the impact drives the doors from their hinges - a noble but necessary sacrifice to spare a valuable officer from serious injury. 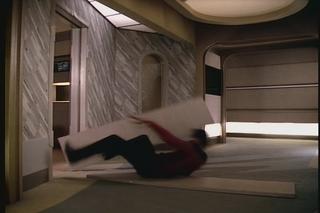 One of the doors thrusts itself beneath Geordi's rump, saving his ass - literally! 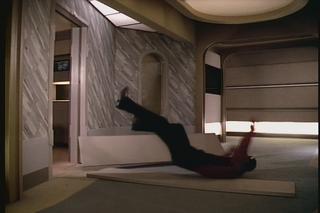 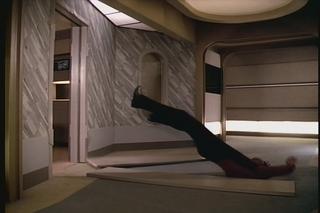 Just another day of service for Starfleet's unrecognized heroes: the Context-Sensitive Doors.

The stated goal of the Enterprise's mission is to seek out new worlds and new civilizations, to boldly go where none have gone before. In short, they seek out the unknown. Well, as a 20th century explorer might have said, had he lived to see the wondrous days to come, "There are things known and things unknown, and in between are the context-sensitive doors."
Posted by Earl J. Woods at 9:05 pm

Strictly speaking, I don't think a sliding door such as the CSD has a "hinge". "Off it's runners" or "Out of its guides" perhaps?

Apros pos not this entry but rather your profile: I suppose it has occurred to you that you could put your current Job listing as "Ghost riders in the sky"?

Er, not so much "put" as "interpret", etc. Look up the lyrics and do the whole song? I don't know, I thought I had something there, but I lost it.

Was each door controlled seperately or was they system controlled by the central computer? I wonder if "centrally controlled" then what fun might a mischievious virus writer have...

I claim dramatic licence with regards to hinges vs. runners. Although I must admit runners would probably be more accurate.

As for my current job listing, I'm not sure what would be appropriate...

As far as I'm concerned, each door is a unique (if limited) individual, an independent AI brain...if only because the Federation is portrayed as so rich that it would actually spend resources on such frivolity.

I always wanted to know what would happen if the control panels started to flash on a starship.


"CAPTAIN! THE NAV CONSOLE IS FLASHING! WHAT DO I DO?!? I CAN'T SEE THE BUTTONS!"

Heh, Earl, that was hilarious. (found your blog from IIDB)

Hey Marcel, so glad you liked it! Thanks for dropping in.

Brilliant in all respects, even ten years after the fact.

Thanks very much, Kurt! I'm glad folks are still enjoying this post.