Cabin on the Lake of the Woods 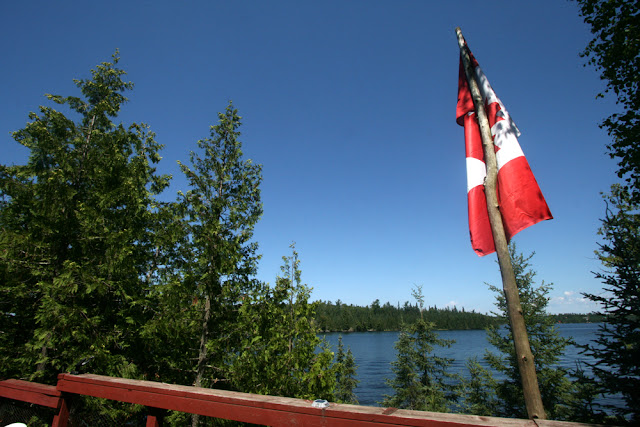 Recently my friend and ex-boss Neil Mackie invited Sylvia and me to his cabin in Kenora for the Canada Day weekend. Sylvia and I hopped in the car as soon as she was finished work on Friday, and a day later, a couple of hours before darkness fell, we found ourselves driving through several kilometers of bush and winding, heaving gravel roads to discover Neil's cabin on Poplar Bay, part of the massive Lake of the Woods. 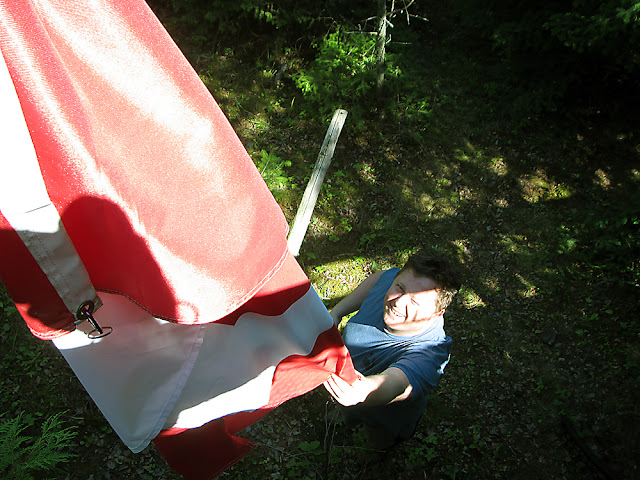 Raising the flag on Canada Day is one of Neil's annual rituals, and we arrived in time to see him mount the flag on a sturdy wooden pole. 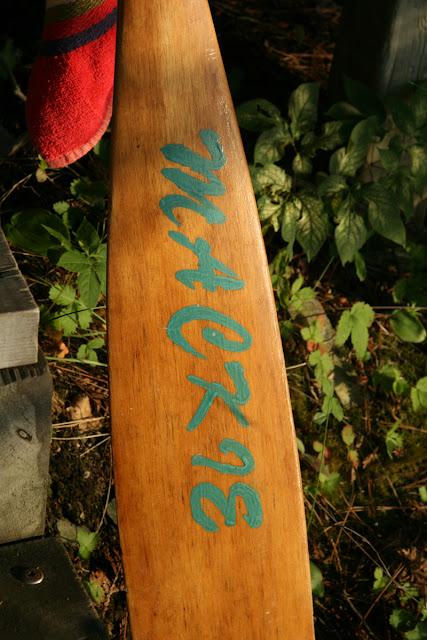 Our late arrival left us with little time but to enjoy a late dinner prepared by Neil's friends Andre and Maureen and to get settled in our room. But right from the moment of our arrival we knew we were in for a special weekend, for Neil's isolated retreat was welcoming and homey in a way only a lakeside cabin can be. 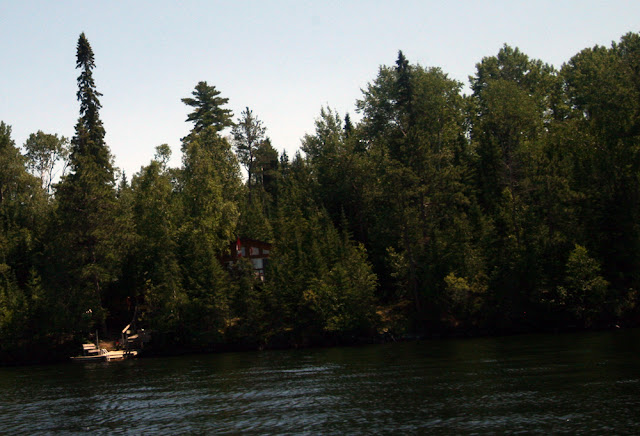 We spent much of Canada Day on Neil's boat, touring the upper regions of the Lake of the Woods. Neil's cabin is barely visible through the trees; you can see the swimming dock at left. 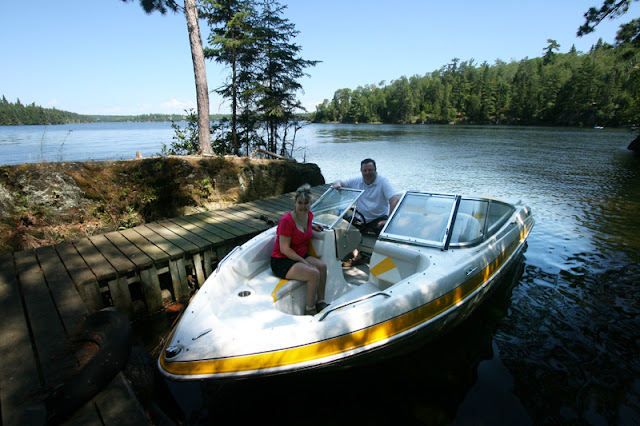 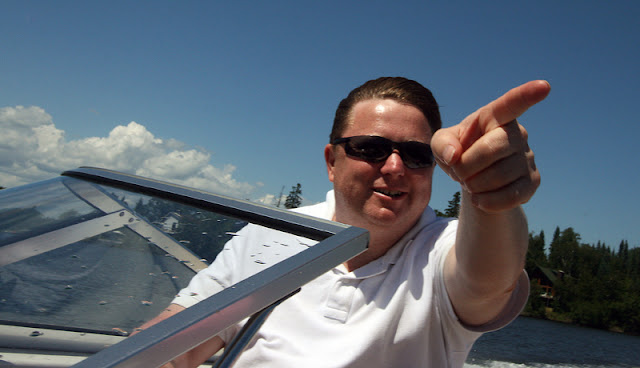 The weather was perfect: low 30s, sunny with just a few clouds and calm waters. Neil is an accomplished pilot and navigator and gave us a thorough tour of the northern part of the lake, bouncing us over the wakes of other watercraft from time to time for fun. We really zipped along, and Sylvia and I were both thrilled by the sights and the ride.

Kenora's proximity makes this part of the Lake of the Woods quite busy. On Canada Day, the lake drew dozens of motorboats, sailboats, water skiers, wake boarders, float planes, jet skis and canoes.

The MS Kenora provides lake tours to residents and tourists. 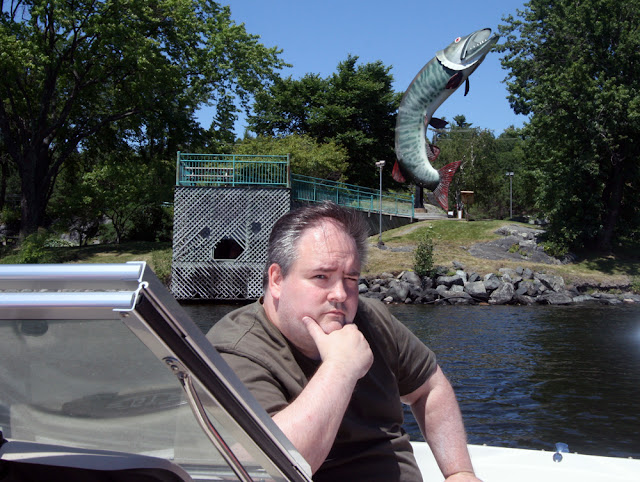 Neil insisted on having me pose in front of Huskie the Muskie.

I didn't catch the name of this fearsome fellow, but whoever painted the boulder did an impressive job. 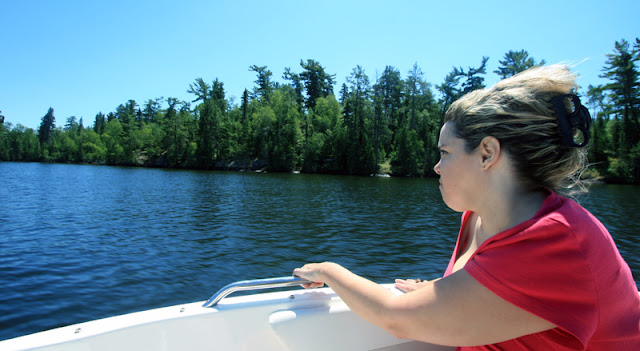 I'm not a sufficiently expert photographer to convey speed, but perhaps Sylvia's hair and expression will give you a hint of the way we zipped along the waves. 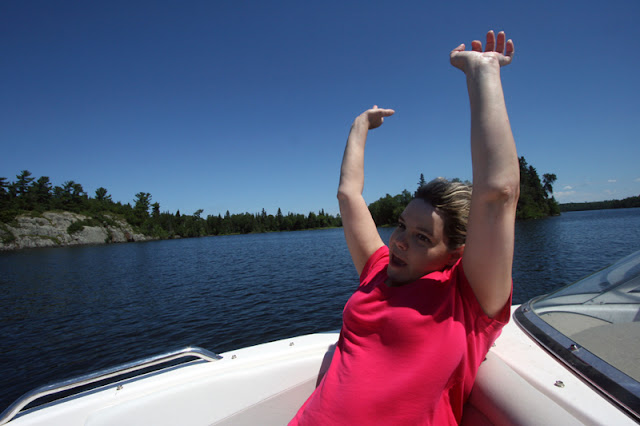 We docked at Safeway for supplies. While I was picking out potatoes for dinner, Neil and Andre rescued a large Labrador that had fallen into the water. Sylvia was duly impressed.

It's been many years since I rode in the bow of a speeding boat, but I remember the thrill of a boat ride quite warmly. And this time there were even comfy padded seats! 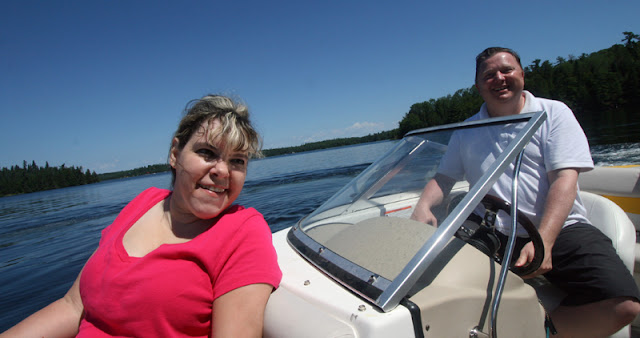 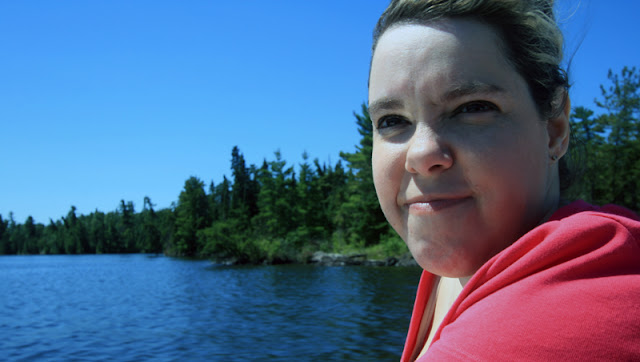 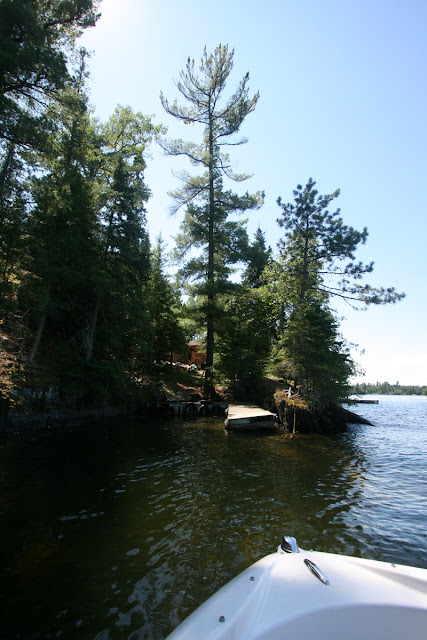 After the midday tour, we took a break to prepare dinner. 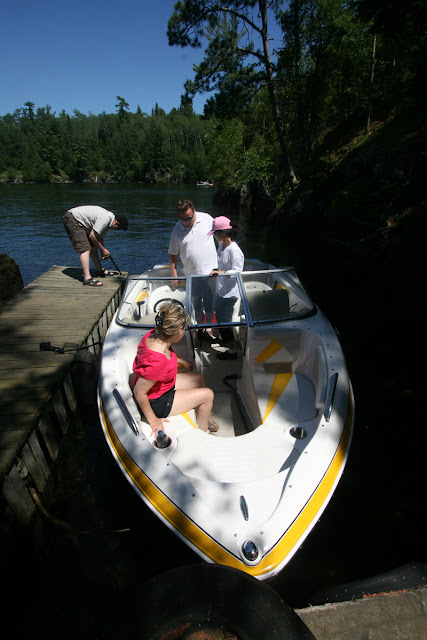 My first embarkation onto the boat provided me with some just desserts; it was a complete pratfall. I stumbled into the bow like the proverbial drunken sailor, managing to bark my shin and knee on the camera and Sylvia's cane while also knocking Sylvia in the head. Fortunately I quickly remembered my sea legs and hopped on and off the boat multiple times afterward without incident. 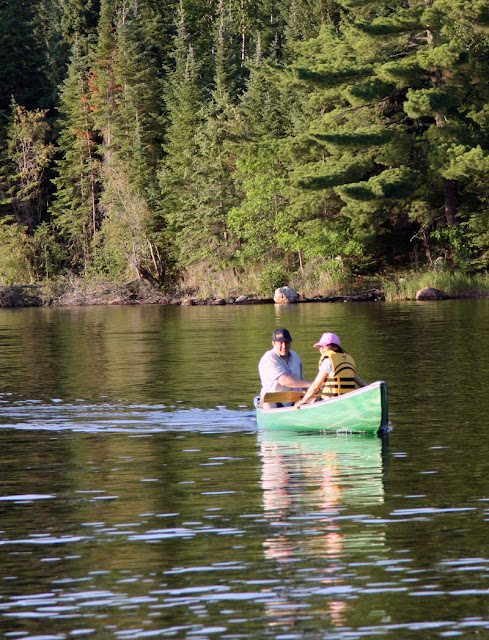 Andre and Maureen paddled around in the canoe for a while. 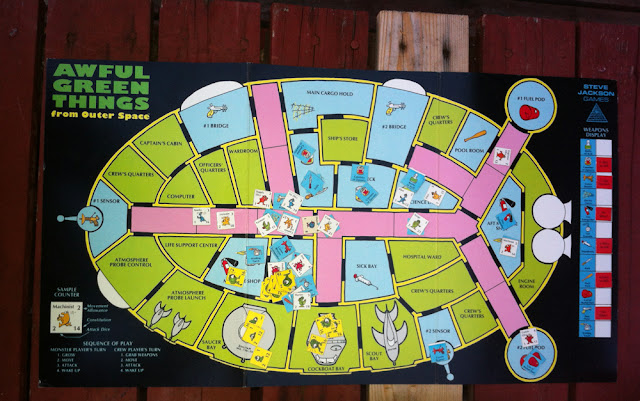 Neil and I, on the other hand, played my very first game of The Awful Green Things from Outer Space. I have the ad for this in a hundred old comic books, but I'd never laid eyes on the actual game until visiting Neil's cabin. Neil's awful green things quickly overwhelmed my multispecies crew. 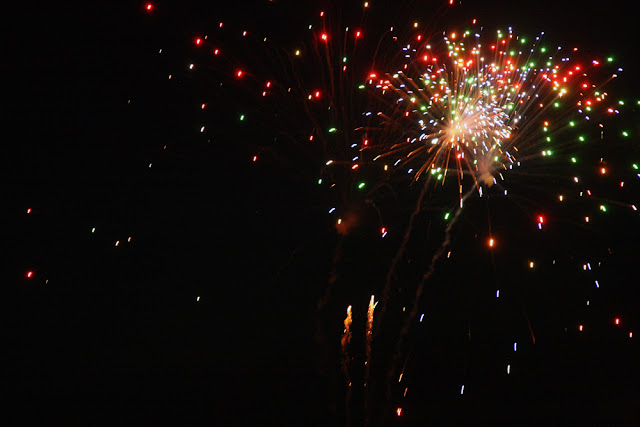 After dinner, we embarked again to watch the Canada Day fireworks right up close from the boat. It was a spectacular show, made more so by the dozens of watercraft crowding the bay. For extra safety, we tethered our boat to that of Neil's friend and neighbour. 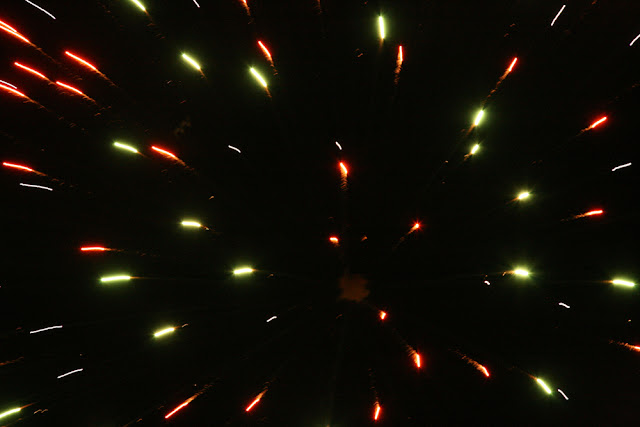 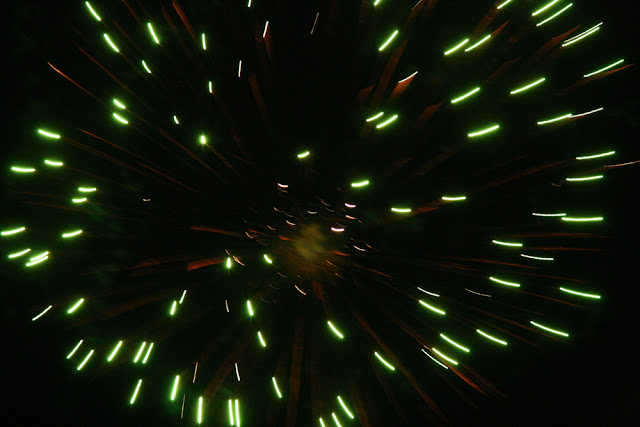 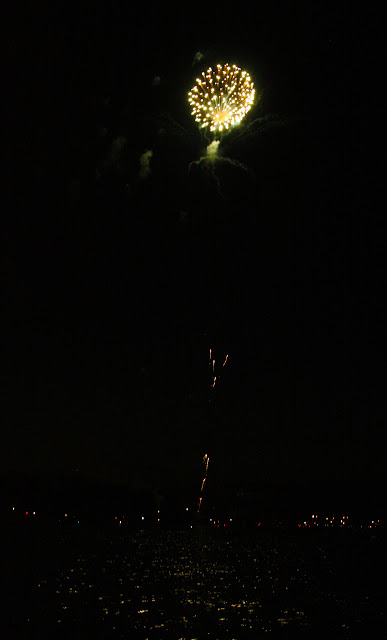 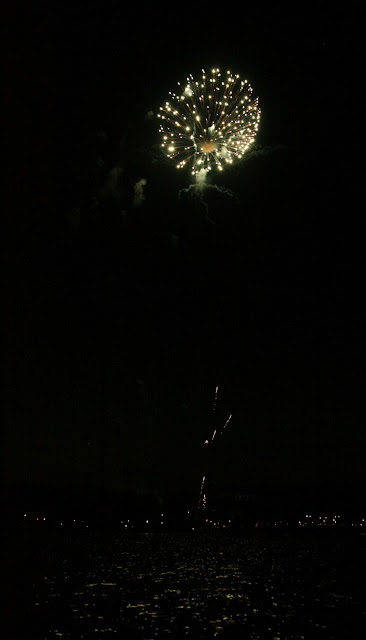 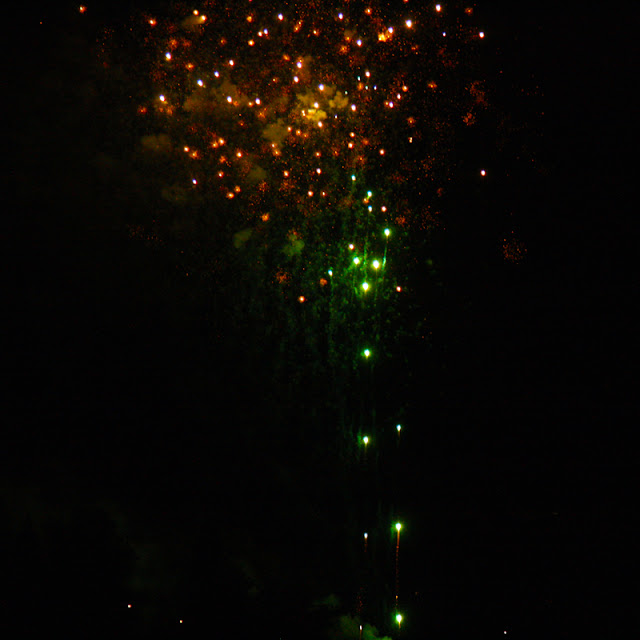 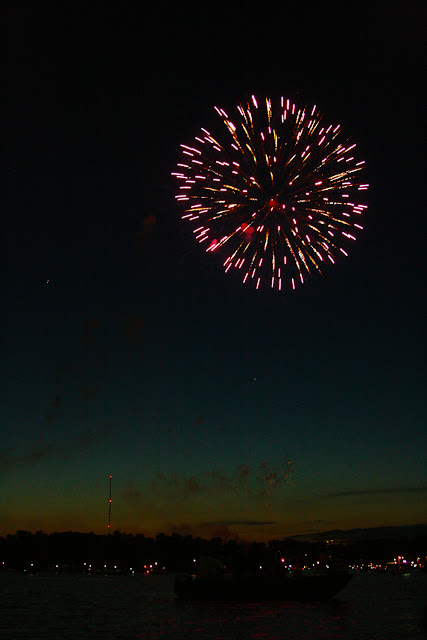 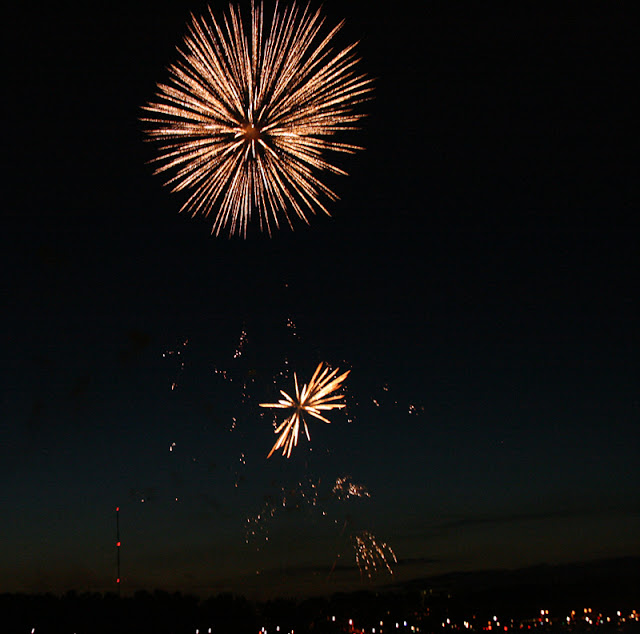 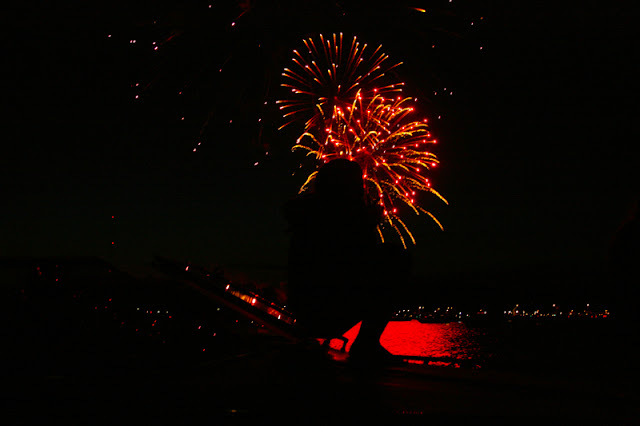 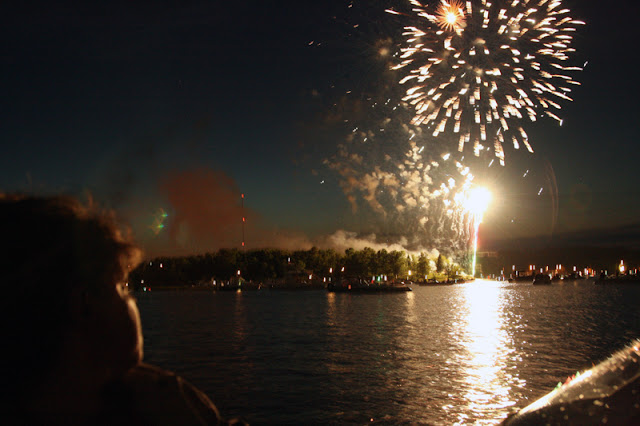 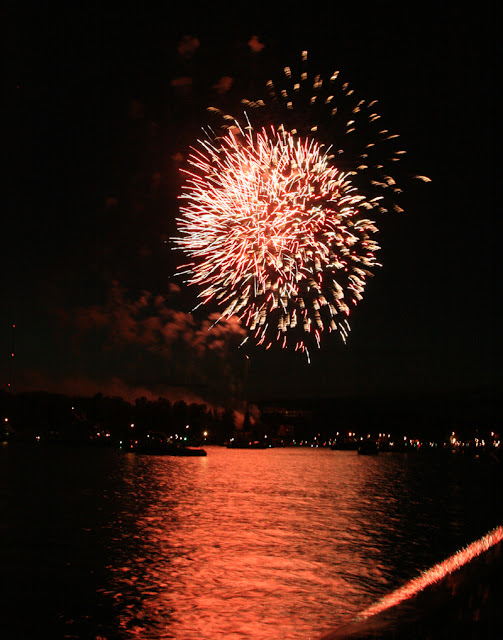 The fireworks were incredible enough, but the ride back to Neil's cabin was a transcendental pleasure. With the full moon guiding a convoy of speedboats returning home, we bounced over the surface of the lake with the wind in our faces, Neil guiding us through the darkness, following in the wake of his neighbour's boat. It was both exhilarating and peaceful at once, and Sylvia and I merely glanced at each other across the bow from time to time, enjoying a special moment that we knew we'd both treasure forever. 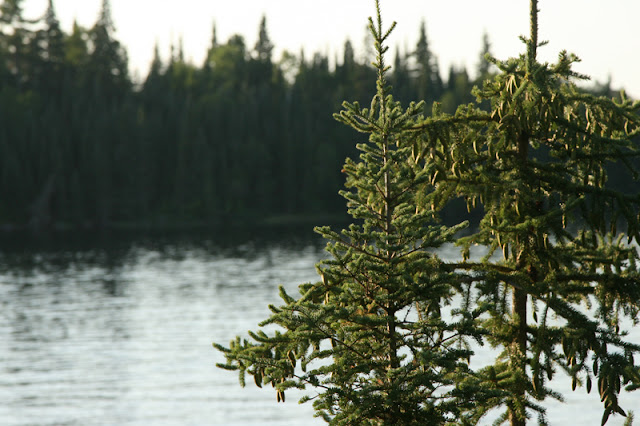 Sylvia and I are both very grateful to Neil for opening his second home to us and showing us the great natural beauty of the Lake of the Woods. It was a short but spectacular journey to one of the world's great treasures.
Posted by Earl J. Woods at 8:01 pm