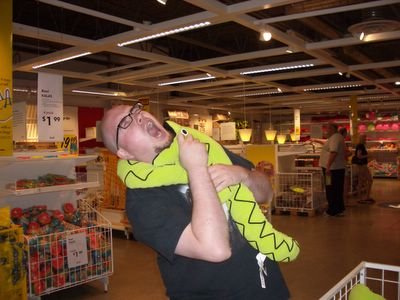 Snakes on a Sean.

The theme of the first decade of the 21st century is fear. Every day, citizens around the world are assailed by fear: fear of terrorism, fear of disease, fear of crime, fear for our children, fear of economic disaster, fear of the unknown, fear of the other.

Minute by minute, the increasingly inescapable media assaults us with images of disaster. Bodies are pulled from lakes. Children vanish - and worse, sometimes they are found, broken beyond repair. Other children, brainwashed by ideology, strap bombs to themselves to destroy their fathers' enemies. Adults, brainwashed by competing ideology, invent terms like islamofascism and Soviet Canuckistan to indelibly brand their philosophical foes as forever evil. Good and evil are back in vogue; shades of grey have polarized once more into black and white. As the real world grows more complex, as human interactions grow more nuanced, our popular perceptions of ourselves grow simpler.

Our media is failing us.

But once in a great while, a work of art challenges us to rip the caul of unreason from our faces to reveal the truth beyond. In the tradition of Citizen Kane, All the President's Men, Network and Absence of Malice comes...

SNAKES ON A PLANE.

Snakes on a Plane presents the viewer with an improbable scenario: Sean Jones (Nathan Phillips), a likeable surfer, witnesses the brutal murder of a Los Angeles prosecutor. But the killers spot Jones as he flees the scene and target the unlucky youth for assassination. Fortunately, crack FBI agent Nelville Flynn (Samuel L. Jackson) intercepts Jones before the killers can get to him and arranges for the witness to be transferred to LA via a commercial flight. Unfortunately, despite precautions the killers learn which plane Jones will be on, and load up said plane with hundreds of venomous snakes, primed to burst from the cargo hold when the plane is high over the Pacific ocean.

Against this simple background, our most primal fears are laid bare. Fear of terrorism, fear of snakes, fear of flying, fear of a grisly death - within the first half hour of the picture, the unfortunate plane's passengers are subjected to every frequent flier's worst nightmare.

But first, a look at our heroes. In the fine tradition of the disaster films of the 1970s, the passengers represent a cross-section of Western civilization, updated for modern times. Our Stereotypes, and their likelihood of survival:

Each of these characters is granted one or two scenes that define his or her character. The more one-dimensional the character, the greater the likelihood of an early exit.

And so it begins. A digital timer counts down to zero in the darkness of the cargo hold, and the snakes, hundreds of them, burst free of their shipping boxes. (No explanation is given as to how the killers got the snakes through airport security.) With evil intent, they writhe across the floor, through the wiring...and into the passenger cabin.

It takes only a few moments for mayhem to erupt. The snakes attack without remorse, fangs snapping, venom spurting, hisses punctuating the screams of their wide-eyed victims. Fangs burst eyeballs, sink into bare bosoms, tongues - even, wincingly, genitalia. The filmmakers pull out all the stops. If you've ever had nightmares about something dangerous emerging from your toilet to attack your most delicate bits, THIS IS NOT THE FILM FOR YOU. Bloody froth bubbles from poisoned passengers. Arms and legs swell like grotesque, pus-filled balloons.

Naturally, only Flynn keeps his cool. As the passengers storm the front of the plane - thus far uninhabited by snakes - the FBI agent whips out his taser and mercilessly zaps the snakes, in much the same way as Jackson's Mace Windu character dispatched his foes in recent Star Wars prequels. He helps several passengers reach relative safety, then barks out one of the film's best lines:

"We have to create a barrier between us and the snakes!"

But it's a temporary solution at best. Flynn desperately searches for weapons, but discovers that the cutlery he hoped to use has been replaced with harmless plastic sporks. He contacts his supervisor at the FBI using the plane's air phone:

"You know all those security scenarios we ran? Well, I'm smack in the middle of one we didn't think of."

The horrified passengers, looking for someone to blame, begin to verbally abuse Flynn and the man who arguably got them all into this, Jones. But Flynn, with trademark cool, shuts them down:

"It's my job to handle life and death situations on a daily basis. It's what I do, and I'm very good at it. Now you can stand there and be the panicked, angry mob and blame him, me and the government for getting you into this, but if you want to survive tonight, you need to save your energy and start working together."

These events reveal the film's subtext. The government's efforts to protect us are futile. All the security in the world has not only not saved us from death, it has increased the danger. We have surrendered our civil liberties in return for a false sense of security that has made us more helpless than before.

So, with little choice, the passengers must take responsibility for their own survival. The Sexy Hispanic Single Mom sucks the poison out of a little boy's arm. The Plucky Lead Stewardess hacks a snake to pieces with a fire axe. The Likeable Witness finds his sense of courage and duty and helps use an inflatable life raft to secure seal off the first class section, where the survivors are taking refuge, from the snakes. Ambiguously Gay Male Flight Attendant nukes a snake in the microwave, while Handsome Exotic Asian Man with Martial Arts Skills kickboxes and karate chops snakes left and right. And through it all, Jackson's Flynn rallies the troops and dispatches snakes with a homemade blowtorch, a broken bottle on the end of a stick, and a harpoon gun.

It is exactly as delightfully ridiculous as it sounds, and the film has just enough self-awareness to gently mock itself without spoiling the proceedings. Back in Los Angeles, as the FBI tries to track down enough antivenom to treat stricken passengers once they land, a character barks, "There's only one man who could have gotten hold of so many illegal snakes!" When the electrical system fails on the airplane and the lights go dim, one unseen, formerly unheard character whispers melodramatically, "The snakes..!" The delivery of every gloriously cheesy line is note perfect. Jackson is clearly having the time of his life, and the supporting players give it their all.

When Flynn, pushed to the brink, finally utters his signature line - "I've had it with these motherblanking snakes on this motherblanking plane!" - the audience at the screening I attended burst into cheers - not simply because the line signals the beginning of the film's action-packed, mind-blowing climax, which truly must be seen to be believed - but because the line resonates powerfully with the frustration of ordinary people forced to live in a civilization that seems determined to consume itself.

The film's genius is simply this: the premise is so ridiculous that it reminds us of how silly the media boogeymen have become. The odds of your child dying in your backyard pool are far greater, statistically, than the odds he or she will be lured to his or her doom by an internet predator. More people - by several orders of magnitude - die every year in car crashes than died on 911. Our own laziness and stupidity will kill more of us than any number of "islamofascists." West Nile and Mad Cow will probably never kill as many people as our own lack of physical activity.

But there is no War on Pools. Dying of heart disease simply isn't as sexy as being blown up by a suicide bomber, and a media hungry to feed our insatiable appetite for the sensational will never report responsibly - not until we curb those appetites and demand better. (And perhaps not even then.)

Snakes on a Plane is probably this year's silliest film. But it is also one of the most revealing films of the new century, and like the b-grade SF that brought our fears of communism and the bomb to life in the 1950s, Snakes on a Plane will be remembered for forcing us to recognize our fears, and for slyly showing that fear itself is more dangerous than any physical or ideological threat.

Email ThisBlogThis!Share to TwitterShare to FacebookShare to Pinterest
Labels: Film, Reviews, Sean, Snakes on a Plane

Wow, Earl -- great review! You almost convinced me I should go see Snakes on a Plane. I really enjoyed this one -- excellent post!

Thanks Leslie! But what do you mean, "almost convinced?" You can't fully appreciate the review without seeing the film, after all...

I agree with Leslie, this is a is an excellent post that is very insightful and warrants attention. Nice job!

You really outdid yourself with this entry.

I had a friend who once wrote an essay comparing Sesame Street: Follow That Bird to communism. I never thought I would read anything better than that, but I have.