Trek to Timmins, Part One Last week, Sylvia and I flew to Timmins, Ontario so that Sylvia could visit her beloved grandmother one last time. It was a bittersweet journey of tenderness, love, laughter and loss, an emotional trek that reminded me there are many kinds of families.

Sylvia's grandparents raised an astounding seventeen children; the eldest is Sylvia's father. Sylvia's mother comes from a family of ten siblings. Like me, Sylvia grew up in a northern mining town on the Canadian frontier, but she did it surrounded by a much vaster array of relatives. (My father is an only child; my mother has three sisters.) Sylvia comes from the French-Canadian tradition; I'm about as Anglo as they come.

Sylvia and I, therefore, interact with our families in very different ways. I tend to be more reserved and quiet with my relatives; Sylvia, like every Boucher I have encountered thus far, is far more open and flamboyant about her feelings. Both approaches are equally valid, but my experience and temperament left me feeling anxious and ill-equipped to deal with literally dozens of hugging, kissing Bouchers in one brief span of time.

I needn't have worried. With kindness and understanding, Sylvia's family took me in as one of their own, even during a very difficult time. 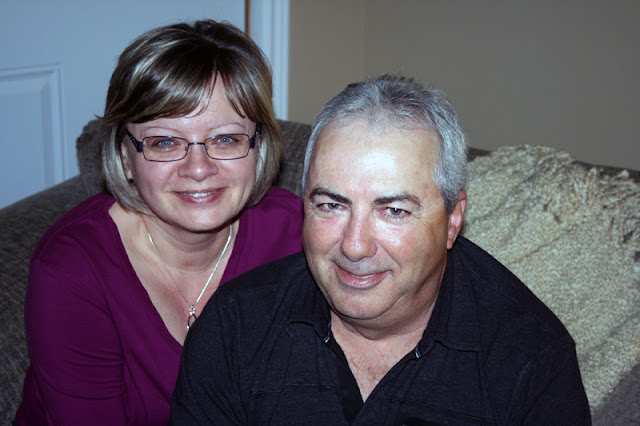 We stayed with Paul and Monique Boucher, AKA "Rico Suave and Monica," one pair of Sylvia's aunts and uncles. Though retired now, together they ran Do-All Maintenance, now being operated by their son Jason, AKA "Baby Tycoon." 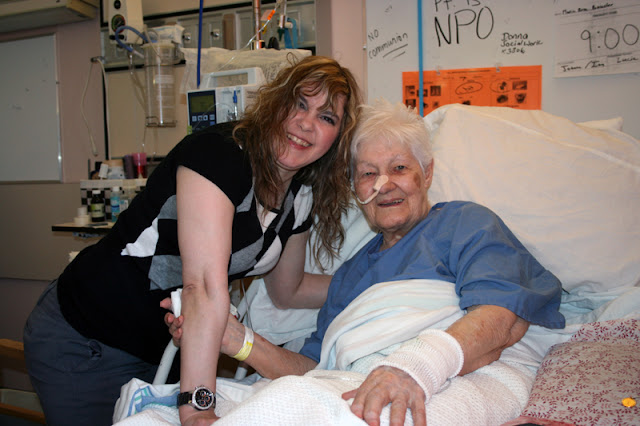 Sylvia's relatives have been keeping a round-the-clock watch on their ma mere since she suffered a series of strokes. Paul and Monique took us to see her right away. Though I'd only met Mrs. Boucher once before, she seemed to remember me, though sadly the stroke has robbed her ability to speak. My laughable attempts to speak French made her giggle (a common reaction from all the Bouchers). Despite the stroke, Mrs. Boucher remained alert and spirited most of the time we were in Timmins. 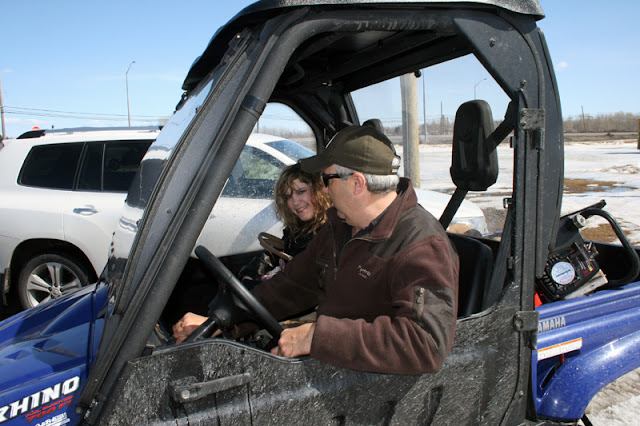 Of course we couldn't stay at the hospital 24/7, so Paul and Monique did a very good job of showing us the sights of Timmins (and its associated community, Porcupine/South Porcupine). Here Paul prepares to take Sylvia ice fishing on Porcupine Lake. 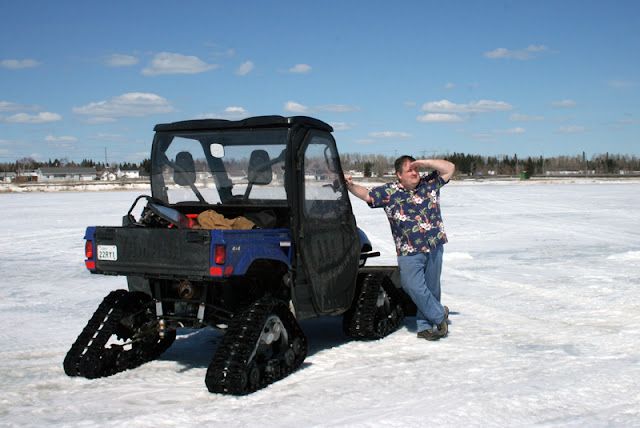 The weather was gorgeous, at least plus 10, and the sunlight bounced off the lake. I wore my Hawaiian shirt with justification. 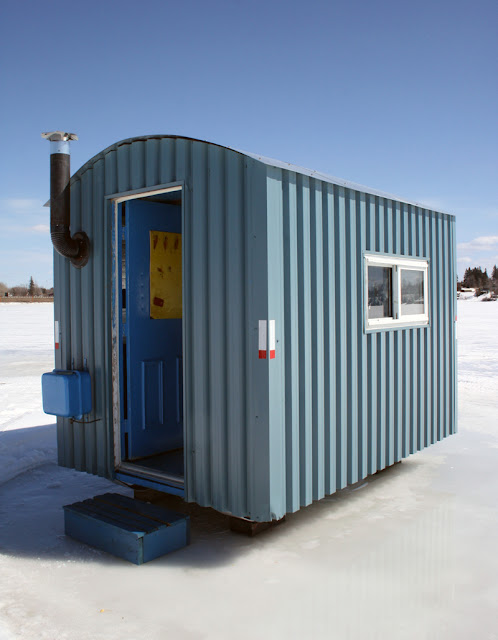 Paul built this ice fishing hut at his shop. 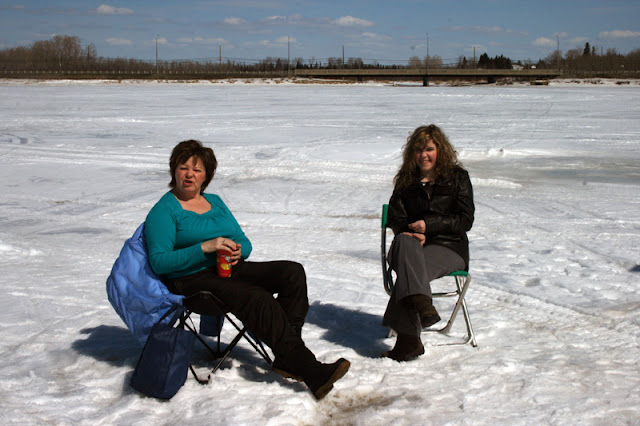 Sylvia and her Aunt Mitch relaxed on the frozen yet balmy lake while I snapped photos and shot video (coming soon). 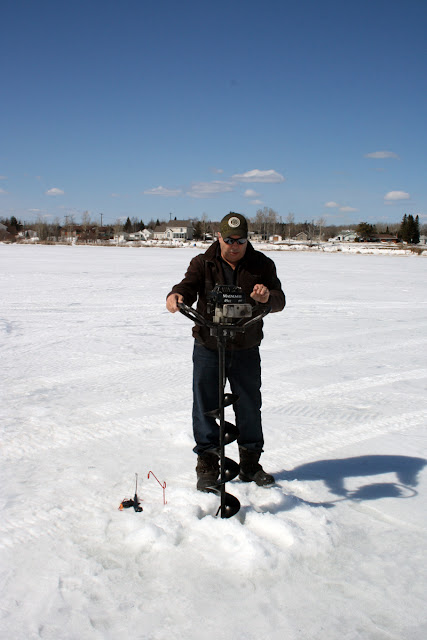 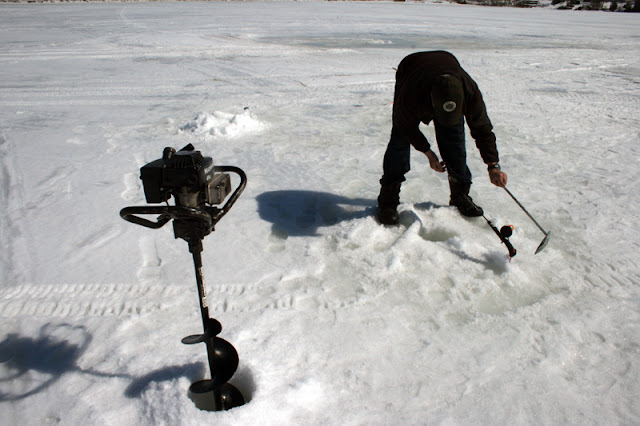 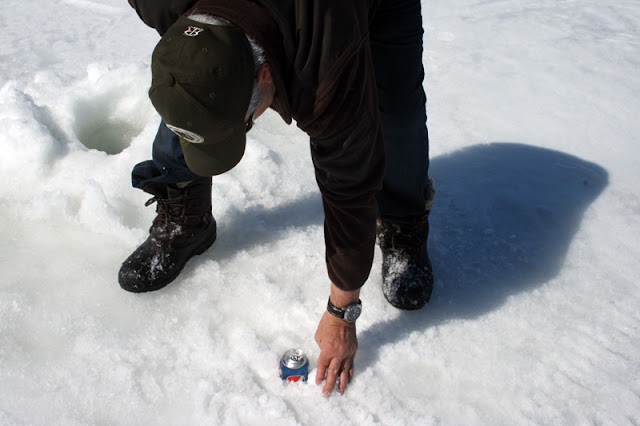 He even drilled a half-hole so that Sylvia could enjoy a lake-chilled Pepsi. 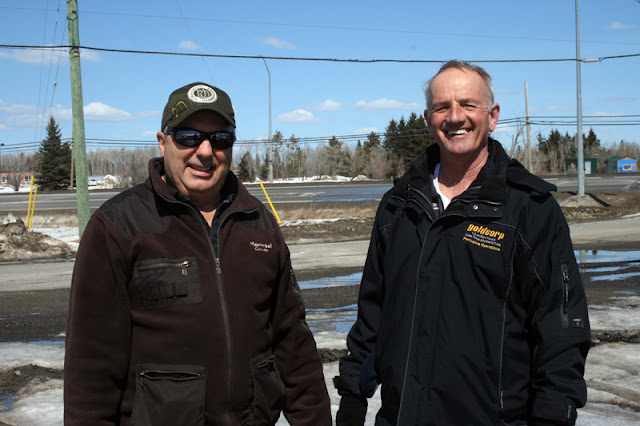 Metaphorically speaking, you can't randomly toss a pebble in Timmins/Porcupine without accidentally hitting a Boucher. We ran into Sylvia's Uncle Tommy on the way to the lake. 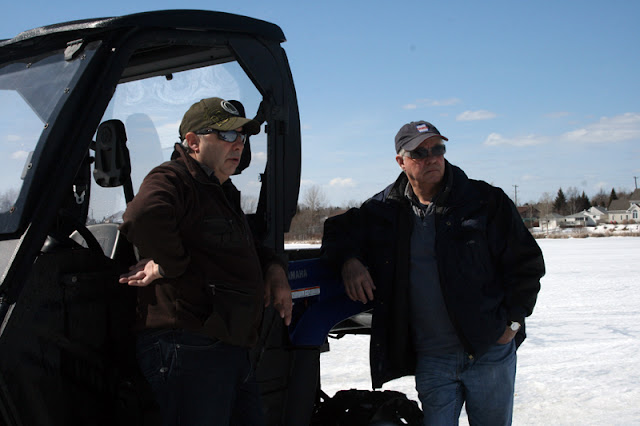 And a little later on, Uncle Leo showed up. 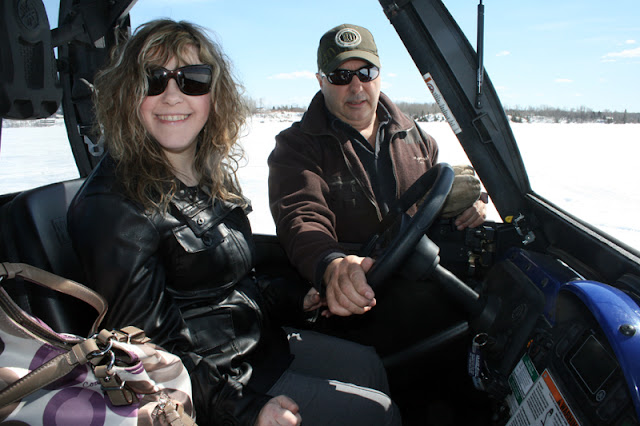 Sylvia insisted on taking her uncle's ATV out for a spin on the lake, despite my trepidation. Here Paul shows Sylvia how to control the vehicle. Note her stylish Versace sunglasses and expensive Coach handbag, which never left her side during the trip, much to the delight of her down-to-earth relatives. There's a reason Porcupine sports an intersection featuring Princess Avenue and Boucher Street. 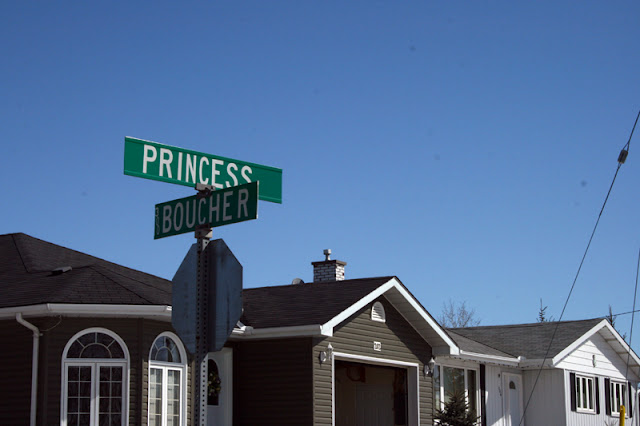 What, you thought I was kidding? 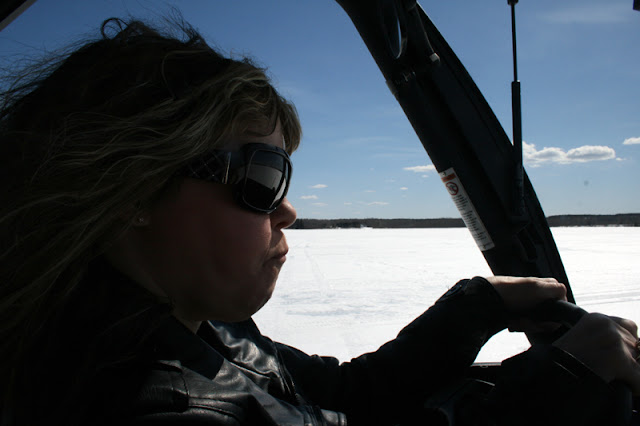 Being somewhat risk-averse when it comes to physical derring-do, I pleaded with Sylvia to drive carefully. 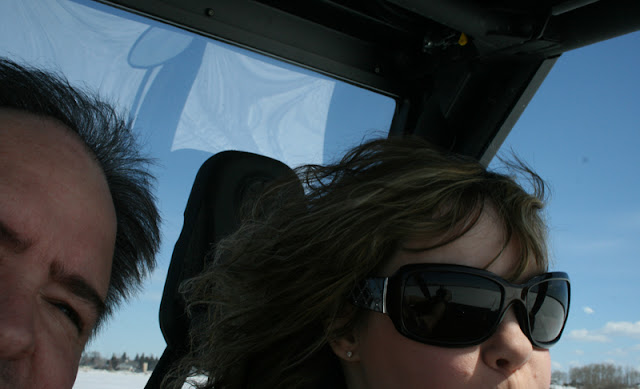 Of course she pushed the ATV to its limits, tearing around the lake at top speed. 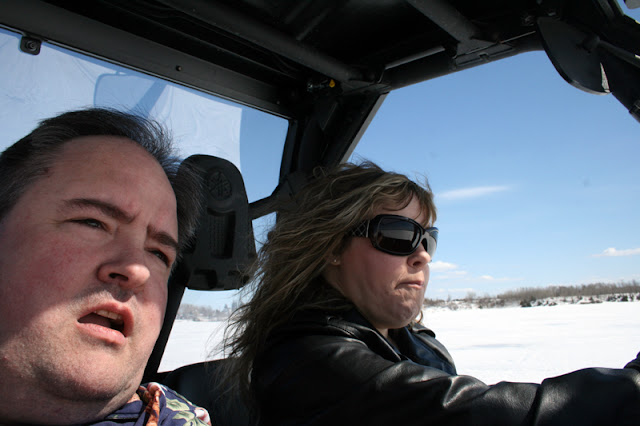 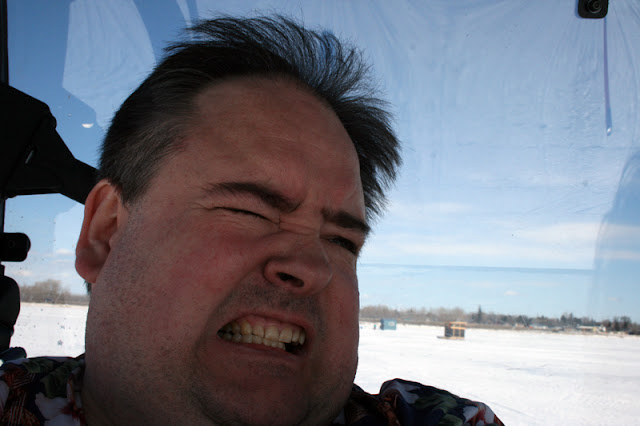 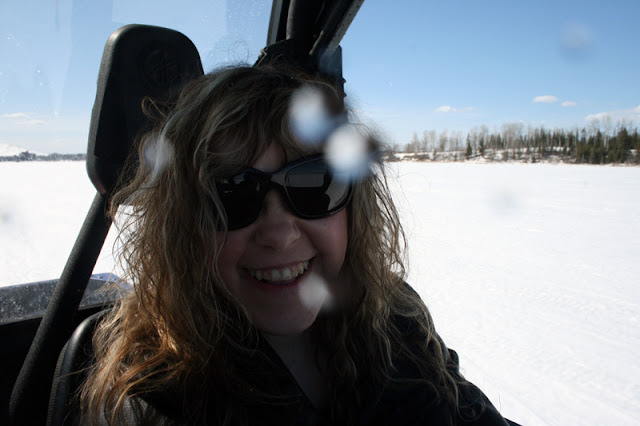 Sylvia ignored my craven pleas for mercy. Fortunately, there were no casualties, other than, to steal a line from Dr. McCoy, "my wits!"

Next: More Bouchers and a tour of Timmins town.
Posted by Earl J. Woods at 9:03 pm

Excellent recount of the beginning of our trip!! Looking forward to reading the next chapters.
I'm so grateful we had this experience.
Sylvia

Very nice job my friend! Thanks alot for that gesture! Glad you two had a great visit(as always!)
You put a big smile on meme's face:)

Sad to hear you made the trip under these circumstances. Timmins and area is an old stomping ground of mine. My dad lived there and I spent many summers and chistmases and other holidaies during the 80's there.