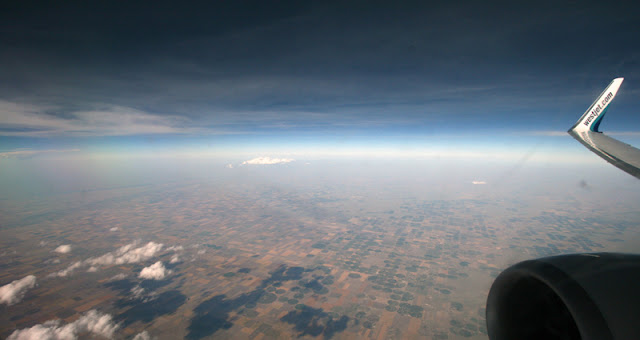 In my first post about our trip to Mexico, I touched on the private misgivings Sylvia and I shared regarding the morality of the tourist experience in developing countries. About halfway through the trip we discussed our feelings about what we'd seen: malnourished, prematurely aged citizens, homes made out of rubble, freeways overflowing with luxury vehicles burrowing through vast slums. On the resorts, tourists are isolated from these realities, but even on the short trip from the airport to the riviera the evidence of a great divide between rich and poor is abundant and unavoidable. The reality becomes even more evident when you venture beyond the tourist enclaves.

We asked each other some troubling questions: how do the Mexicans here really feel about the tourists they're serving? Are they happy to have relatively good jobs? Resentful that rich Europeans, Australians and Norteamericanos make repeated visits to luxury resorts on Mexican soil - resorts that the vast majority of Mexicans can't afford to visit?

I'm not saying that a nation's attractions should be limited to citizens of that nation; as a humanist, I think the world belongs to all its citizens. But it does seem somewhat unjust that the world's rich peoples have so much more opportunity to enjoy Earth's cultural and geographic treasures.

There's no question that tourism is vital to the Mexican economy and contributes significantly to their GDP. It still seems unfair that I suffer less economic hardship to visit the Yucatan than, say, a poor Mexican from Mexico City would, despite the hypothetical Mexican living thousands of kilometres closer to the Mayan Riviera and all its attractions.

When Sylvia and I were in Valladolid, our supper stop after Chitzen Itza, we separated from our tour group and were caught in a sudden torrential downpour. Taking shelter near a hole-in-the-wall shop, we found ourselves conversing with a very talkative and friendly Mexican, apparently the shop owner or manager, eager to practice his English. He carried a well-worn Spanish/English dictionary with him, and we talked about fish, of all things. While we spoke, an ancient and withered woman hobbled up to us in an effort to sell us - well, I'm not sure exactly what. She spoke no English and her Spanish accent was too thick for Sylvia to penetrate, but it was clear she wanted us to buy whatever was in the heavy bags she lugged around. With only enough pesos left to cover tips for our tour guides and the staff back at the resort, I passed, though I still feel bad about it.

But that being said, I wonder if my guilt is misplaced or even paternalistic, condescending. The woman wasn't at all disappointed our put off by our disinclination to purchase; she simply moved on to the next person on the street. Her advanced age and independence suggested that she didn't need the help of rich tourists to survive, so isn't it self-indulgent to feel guilt? Or is that simply the rationalization of a comparatively wealthy person looking for excuses not to help?

These issues bounced around in my head continuously during our trip, and I still don't have any clear answers. I can say only a few things without ambiguity: first, all the Mexicans we encountered, off-resort and on, were unfailingly friendly, helpful and interesting, and they made the trip doubly rewarding. Second, Mexico possesses great natural and cultural wonders that I feel privileged to have witnessed. And finally, I hope that tourism will eventually help all Mexicans enjoy a far greater standard of living than many of them currently enjoy.
Posted by Earl J. Woods at 9:07 am

Meeting locals when I take a vacation like that brings up many questions in my head. What do we really need? How do you treat others? Are we working with an attitude of gratitude or entitlement? What really makes the huge gaps in our world between rich and poor? Why do people like Earl and Jeff burn so easily?

Next time you go, you can always just ask the people what they think. Mostly, they live their lives the same way we do: they wish for more and better for their families, but they are happy enough with what they have. Many folks have connections to Canada: families, friends, or they have already been here either on their own vacations, or coming for work. They struggle with personal issues the way we do, drugs, alcoholism, politics, sex, family, crime, etc. The scale is just different (but so is their legal system, so definitely beware of breaking their laws!). I think it's very important to remember that.

Mexico does have comprehensive social assistance programs for the healthcare and provisioning of the very poor. In that regard, they do better than Canada does. A quick trip to East Hastings will convince you of that.

The all-inclusives are insular, no doubt. The people that work there have competed for those jobs and are well-trained and mostly reasonably compensated for their effort. I think that tee-totaller Earl must have made them smile a little, as you likely didn't wreck their alcohol budget.

As you've seen, all-inclusives are artificial environments. As a tourist, you see it as a place where you have near-servants who are willing to wait on you hand and foot. As a worker, it's just another venue, much the same as working in an office, hammering away at a word-processor, or driving a truck.

Poverty issues are without a doubt a massive concern in Mexico, just like they are here. I feel great concern about the drug wars and the food and pharmaceuticals available to most Mexicans. They pack so much sugar and corn into their food! It's a hallmark of a collapsing agricultural system, but then look at the massive amounts of sugar and corn we consume in Canada... not much different.

Talking this over for a while, I thought of a term of refernce you'd understand: WWCJTKD? (What Would Captain James T. Kirk do?)

Kirk is no stranger to strange lands. When faced with a novel situation, he will unerringly phaser the Klingons and take to bed the space-babes. He tries to help the disadvantaged, but he doesn't worry about the consequences very deeply. For instance, he never discusses destroying Vaal with Elaan of Troyius. Presumably, he is confident in the rules of the Federation, especially the Prime Directive.

Kirk does enjoy the occasional diversion to tourist traps: from Omicron Delta to Argelius II, from the cantina on Deep Space Station K7 to the officer's lounge on Starbase 11, Kirk happily swigs the blue wine and clicks the lights to show his appreciation of an especially fine belly dance.

So, if Kirk can do it, we can do it. A vacation should be just a vacation. That's not to say that the wealthy should never help the poor, just that helping through established channels might work better than random charity, that awareness and education are better than guilt and a lack of focus.

Hmmmm. That's an interesting way of looking at it, and I wondered if I was being too analytical. Thanks Jeff!