The act of recording himself always struck him as egotistical. He was no great scientist or artist or explorer, recording his deeds or discoveries for posterity; he was just another citizen, neither the brightest nor the dimmest, the bravest nor the most cowardly, the strongest nor the weakest. He was just...Earl.

And yet he felt compelled, from a very young age, to document his journeys. As soon as he could pick up a pencil, he wrote. As soon as he could hold a camera, he shot. The world around him, especially the people, captivated his attention, and he felt that if he didn't record, he would forget. As he has indeed forgotten so very much.

On this trip, he vowed to take his time, to photograph points of interest, to lose himself in contemplation, to absorb the continent's beauty and in some way come to understand it - and himself - just a little better. 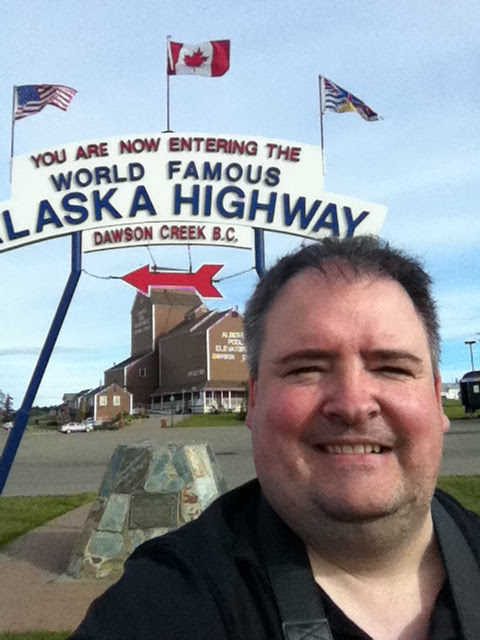 He started at Mile Zero. 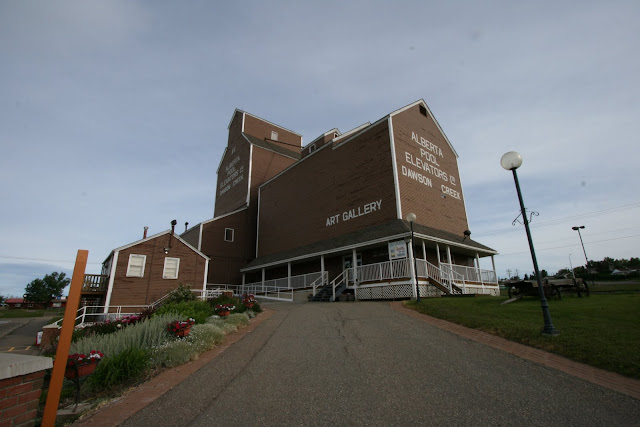 He rose too early to visit the insides of Railway Park, assuring himself that he would do so on the return voyage, unaware this promise would be impossible to fulfill. Besides, he was anxious to move on to Mile One, and all the other Miles beyond. 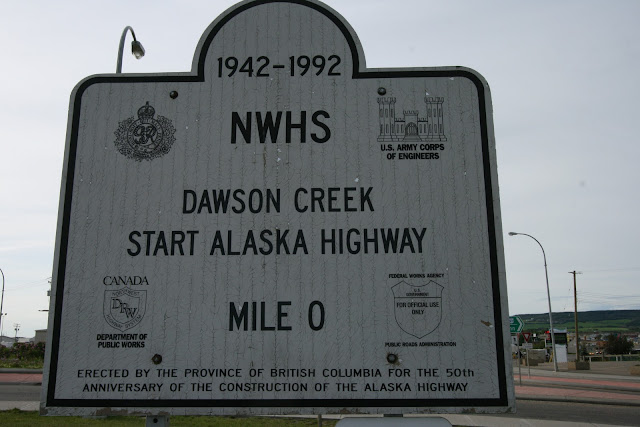 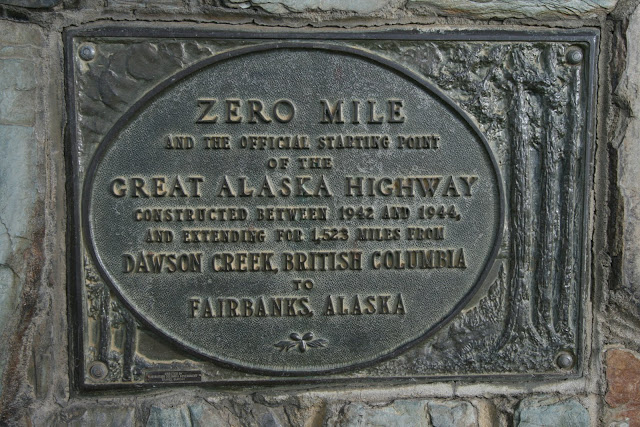 It seemed unbelievable to him that humans had inherited a whole world, yet that so few would have the opportunity to glimpse even the smallest part of it. He had no desire to travel for luxury or relaxation; he wanted to touch each corner of the world merely to see what was there. 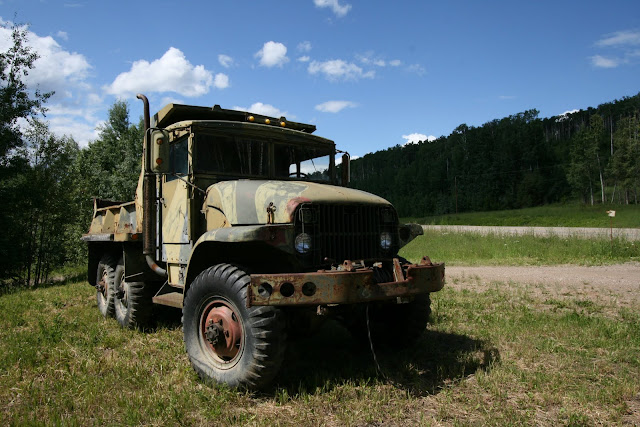 Just a few kilometres into his journey, he ran across a relic of the highway's construction, an old World War II-era truck, weather-beaten and abandoned. There was no commemorative marker, no "point of interest" road sign; only the truck, at rest in mute testament to a grueling project's completion. He wondered how many men (and they almost certainly would have been men) drove this truck as it resupplied workers or ferried raw materials. He wondered who had left it here, and who had allowed it to remain, and who cared for it in its long, solitary retirement. Like thousands before him, he shot a few photos, stared, and left when the mosquitoes became too annoying. The truck took no note of his departure. 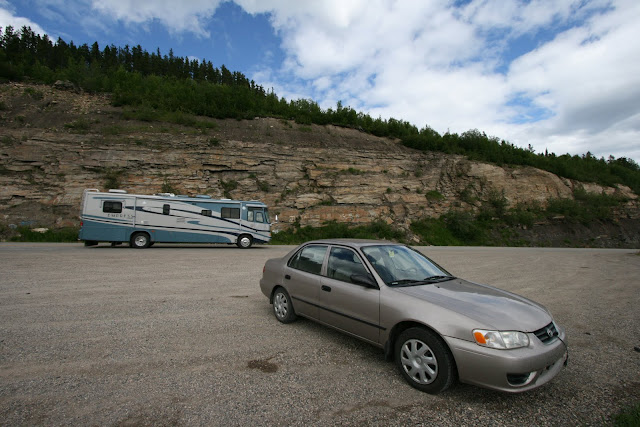 Even this early into his journey, massive motor homes and recreational vehicles were ubiquitous. The scope of his trek shrank into insignificance compared to these roaming behemoths: from California they rode, from New York, from Virginia, from Florida. His few dozen hours on the road would be as nothing when measured against these hardy travellers. 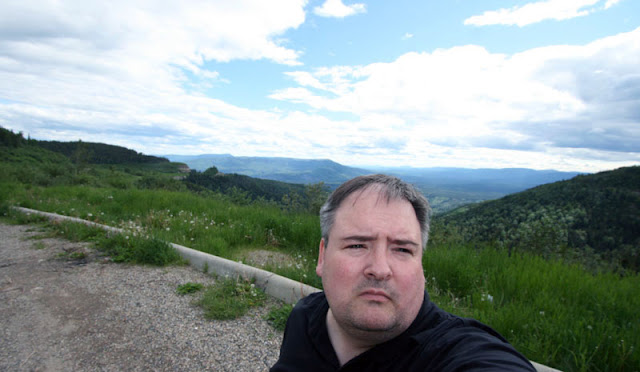 But then it wasn't a contest, he thought. He wasn't going where no man had gone before, he wasn't Magellan or Cook or Kirk. He was just a tourist, and content to be just a tourist. Others had seen these vistas before, but he hadn't, and when he drive high into the mountains and looked back upon peaks now far below, he imagined he felt the same appreciative thrill of those who had blazed this winding trail. 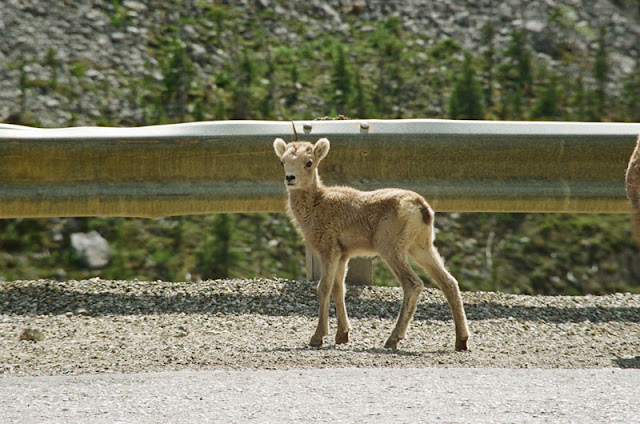 Rounding a curve he stumbled upon a flock of stone sheep loitering by the side of the road. Thankful he'd brought along his parents' old camera with its telephoto lens, he pulled onto a rocky shoulder and focussed his camera's eye upon the beasts. He knew that nothing he shot would be worth of National Geographic, but it would be another memory frozen in time - good enough for his purposes. 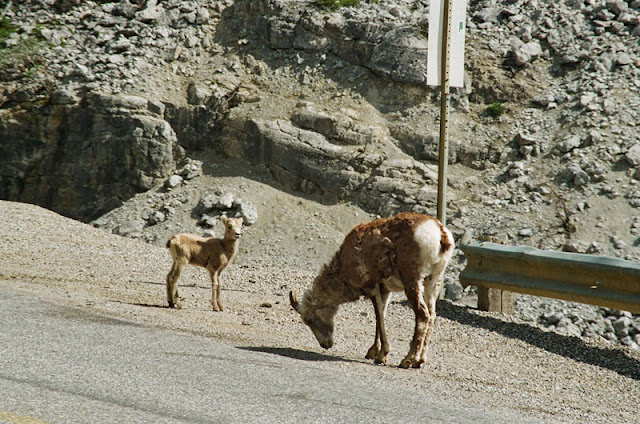 Perhaps an hour later he slowed to join an impromptu convoy of slow-moving tourists, arrested by the majestic appearance of a gathering of buffalo: 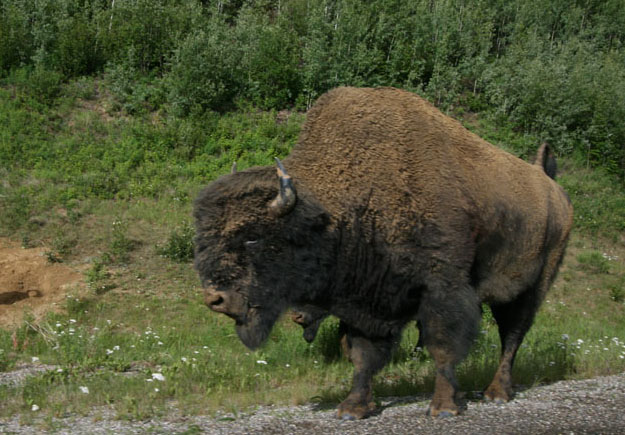 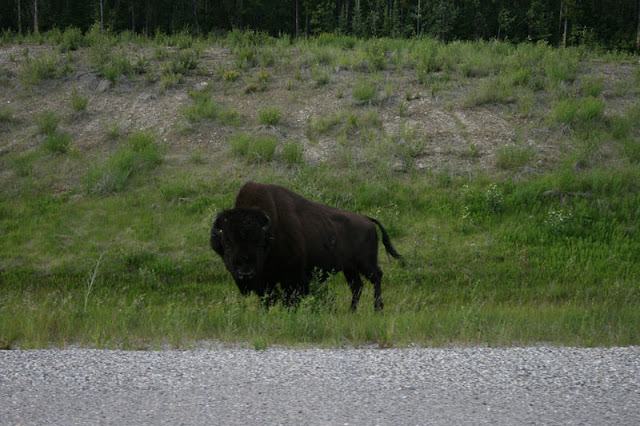 With imperial dignity, one great beast sauntered across the road, nearly close enough to brush his bumper. It paused and looked him in the eye; Earl looked back, wondering what thoughts took shape in its mind. One part of him imagined some mystic communion with nature; the other reasoned that the beast wasn't sapient, that it was merely assessing whether or not he was a threat.

The moment passed, and Earl drove on. His maps revealed that the winding, border-straddling road had taken him into the Yukon Territory now, but without signposts he didn't feel compelled to stop for a photo. Instead, a few kilometres on, he goggled in disbelief at the strangest sight of this entire trip.

A gravel pit hugged the north side of the road. Within it stood a man alone, a man wearing black shoes, bright white pants and shirt, a rainbow-coloured jacket of polka dots and matching hat. He stood beside an ice cream cart, looking up at the sky. Fort Nelson was hours behind him, Watson Lake hours ahead. There were no construction crews in sight, nor even a campground or rest stop where an enterprising ice cream man might find willing customers.

No, he was alone, alone and content, removing his cap and slapping it into one palm while contemplating eternity.

Earl drove on, mystified. In the rear view mirror he saw two other cars slow down and point at the man; this was no northern mirage, merely something inexplicable. He considered and dismissed the idea of turning back for a photo, knowing that he would regret the decision forever. But some images were never meant to be captured. 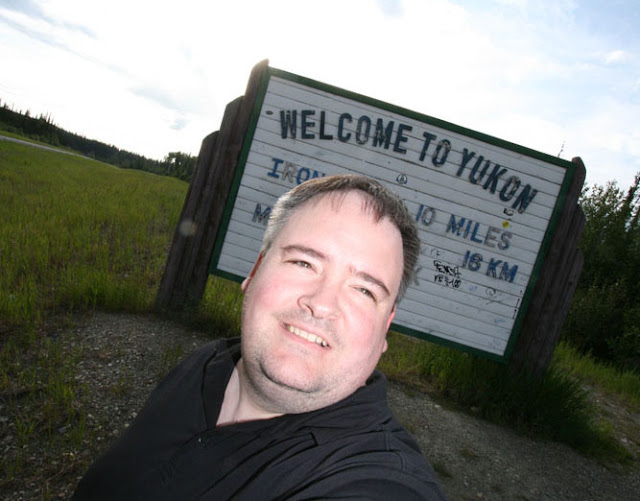 As twilight struggled and failed to collapse into night, he found the first sign that he had officially crossed into the Yukon, and therefore the 60th parallel. It was the furthest north he'd ever been, and of course he spent a half hour shooting photos and videos. He felt vaguely silly - but then that was how he felt all the time. 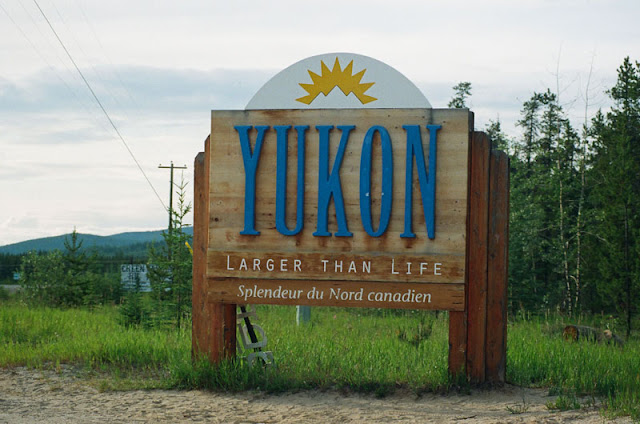 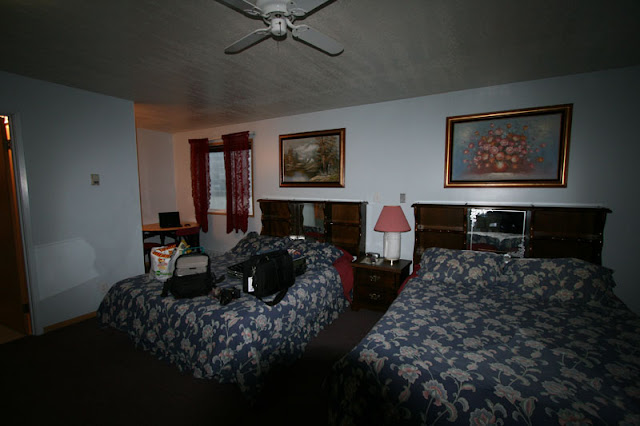 It wasn't the Hilton, he thought, but it was cheap. All he needed was a few hours' sleep and the journey could resume. He'd visit Watson Lake's famous Signpost Forest first, and then move on to Whitehorse. He could not know how the fateful decision he made there would jeopardize the rest of his voyage; heedlessly, he slept, awaiting the morn.
Posted by Earl J. Woods at 12:09 pm