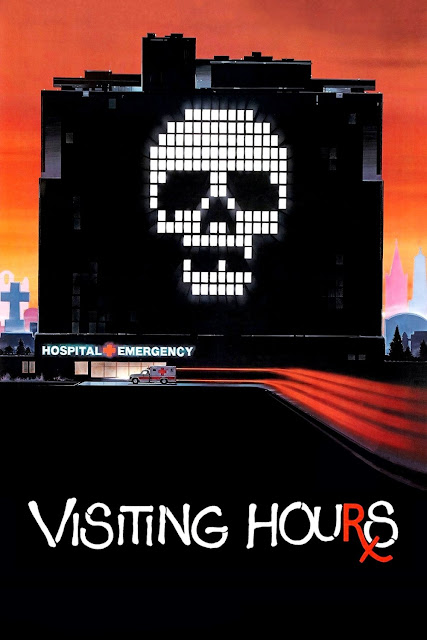 I went into Jean-Claude Lord's Visiting Hours (1982) with low expectations, but as it turns out this is a pretty effective slasher film set apart from the big slasher names of the 80s--the Friday the 13ths, the Halloweens, and the like. There are two major differences: there's not a hint of the supernatural in this story, and both villain and victims act in (from their different perspectives) reasonable and realistic ways.

Michael Ironside plays Colt Hawker, an unhinged psychopath who hates women, particularly strong women who advocate for themselves. Gradually, through a series of flashbacks spread throughout the film, we discover that Colt's mother attacked and disfigured Colt's father after suffering years of abuse from her husband. Those same flashbacks also imply, in subtle yet truly nauseating fashion, that Colt's father may have been sexually abusing their son. While this disturbing background doesn't excuse Colt's actions, it helps explain his twisted motivations.

Colt's breaking point, it seems, comes when television journalist Deborah Ballin (Lee Grant) advocates for an abused woman who was put on trial for defending herself from her husband. Station manager Gary Baylor (William Shatner) plays a supporting role as Deborah's rather ineffective boss and friend, and he's fascinating to watch, especially in contrast to his heroic turn in Star Trek II: The Wrath of Khan in the same year. Baylor is well-intentioned and advocates, somewhat weakly, for Deborah's right to speak out, but it's the women in this film who provide the strongest thematic and story opposition to Ironside's Colt.

First among them is Ballin, of course, who fights back gamely during Colt's initial attempted murder but winds up in the hospital, badly hurt and forced to endure an extended recovery before she'll be able to return to work - and to her advocacy for women's agency and rights. But interestingly, Ballin fades into the background for about the middle third of the picture, and in her place as protagonist steps nurse Sheila Munroe (Linda Purl). When Colt learns that Deborah Ballin is in hospital, he makes multiple attempts on her life in the hospital, killing other patients along the way, and he's foiled by Sheila, which puts her on his list of targets.

The focus shifts yet again as we follow Colt's grimy life outside murder, when he picks up a young woman named Lisa (Lenore Zann) and violently rapes and physically abuses her during what she thought was going to be a date. But Colt doesn't kill her, and she winds up in hospital under Shelia's care. We learn later on that Lisa took revenge offscreen by rounding up some of her friends to invade and trash Colt's apartment, an incident that occurs offscreen and is revealed only later in the film, but struck me as an interesting display of women's agency. (Perhaps even more fascinating, all three female leads are presented as single, either explicitly or via implication by absence.)

Lisa later becomes instrumental as her raid on Colt's apartment uncovers evidence of his crimes, which she hands off to Sheila. Unfortunately, Colt is one step ahead of everyone and sets a trap for her, gravely wounding the nurse and putting her, ironically, back in her own hospital. At this point, the focus shifts back to Deborah Ballin for the final confrontation. In the best traditions of the "final girl" trope, she of course dispatches Colt and sets the world right again....until the next slasher film comes out.

Many reviews of the era slammed Visiting Hours for its exploitative violence, and that's fair, particularly in Lisa's case; the scene where Colt assaults her is definitely exploitative and deeply discomfiting. On the other hand, most Lisa-like characters in this genre don't get to fight back and survive like Lisa does, which doesn't necessarily redeem the film, but I think speaks to its sincerity when it comes to the movie's central theme, that of female empowerment. I think it's very telling that none of the male characters, including alleged heroic lead Shatner (who's barely in the film, really) nor the scores of determined but hapless police officers, really contribute at all to the film's ultimate resolution. The collective bravery and actions of Deborah, Sheila, and Lisa lead directly to Colt's defeat. In effect, there are three "final girls" (and we really should be calling them "final women" if we're going to use the trope at all).

I wouldn't go so far as to call this a feminist movie (far from it!), but I think given the limits of the genre, it's more progressive than many similar films of that era. And it has other merits, of course--effective cinematography and production design, solid editing, and good performances all around, particularly from the women leads and Michael Ironside. It's no classic, but I think Visiting Hours deserves a better reputation than it has.
Posted by Earl J. Woods at 8:26 pm

Fascinating. I remember seeing that cover in video rental stores for years and never once renting it. Interesting to see that it's a cut above .