The customs officer at Port Alcan inspired vague, undeserved pity. The man was polite but brusque,  professional, and yet Earl could tell that he was bound by regulation and convention not to be friendly, to treat each traveller as a potential threat. Earl understood that border agents had a tremendous responsibility, and that each officer had to develop his or her own way of handling a job that was at once routine, yet held the potential for peril. After a few seconds of polite inquiry, the officer allowed himself to warm up just a little, pointing out (in answer to Earl's stated reason for visiting) that fireworks weren't likely given the Midnight Sun, but that parades were a certainty. And then the roadside interview was over, and Earl drove on.

Drove on ever upward, it seemed, each gentle curve winding its way into the heavens; this didn't feel like driving in the Rockies. It was more like driving along a gradually rising plateau, so gradual that it took him an hour or two to realize that there were peaks below him, and that he was driving through the clouds.

Though he swore he'd never drive a marathon again, it seemed unconscionable to stop now. He passed through Tok and allowed it to dwindle in his rear view mirror; hundreds of miles later, he did the same at Delta Junction, the official end of the Alaska Highway. He felt pieces of his mind snapping into place like blocks of Lego, piecing together their ultimate goal: Fairbanks. Fairbanks Fairbanks Fairbanks. 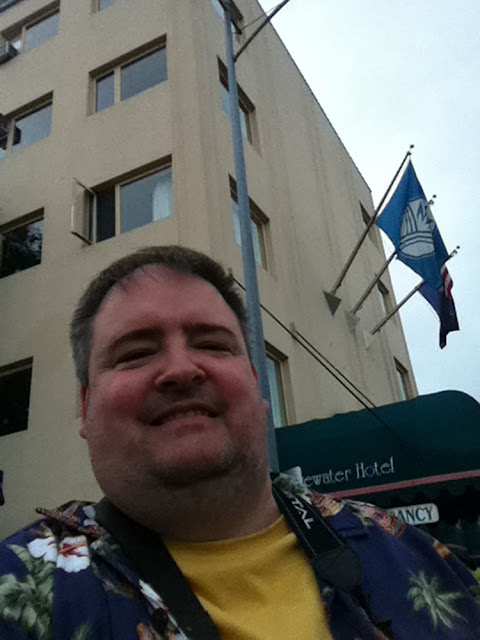 17 hours after he left Watson Lake, he arrived. Exhausted, he booked a room at the Whitewater Hotel. He rose in the morning, checked out and went off in search of a parade. He was startled when a trio of F-16s passed overhead, sonic booms shaking windows.

Fairbanks was a lot like Thompson, he thought. This is an industrial town, a northern town; utilitarian, isolated, a little dumpy. But he knew that those who called this place home loved it as much as he had loved his own northern home towns. There was no evidence of parades; in fact, he saw little evidence that Fairbanks was prepared to celebrate Independence Day at all, and this shocked him. He drove ten miles south to the bedroom community of the whimsically-named North Pole, and sure enough, a few hundred flag-waving souls were gathered around a traffic circle, patiently waiting for a parade.

He joined the throng with a smile. On a quest for irony both sartorial and sardonic, he wore a Hawaiian shirt over his command-gold Star Trek t-shirt. "I'm wearing a Hawaiian shirt in Alaska!" he thought gleefully, imagining his beloved Sylvia rolling her eyes and exclaiming "I'm so glad you know so many ways to amuse yourself." 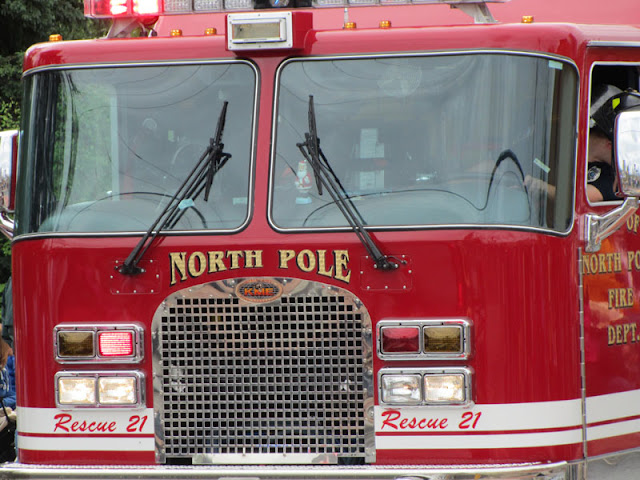 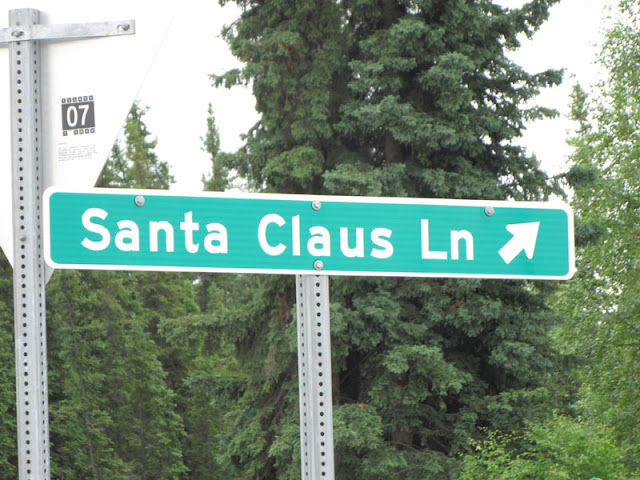 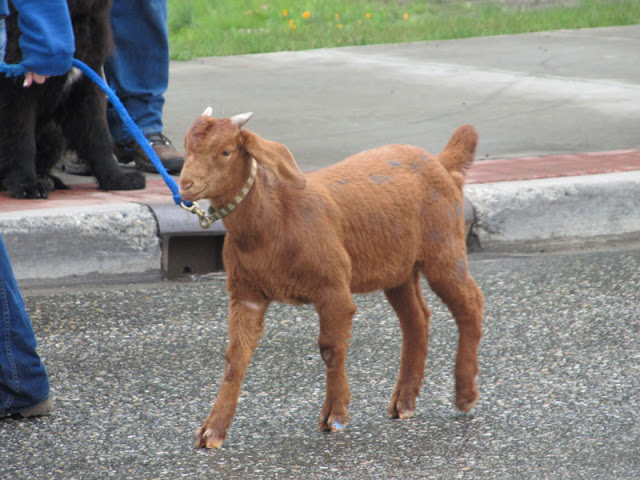 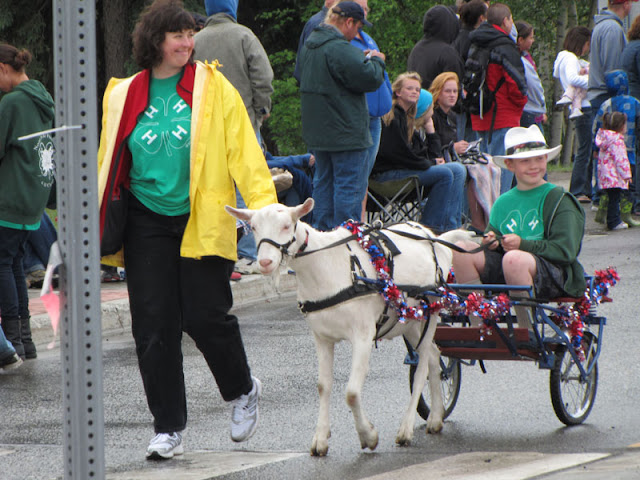 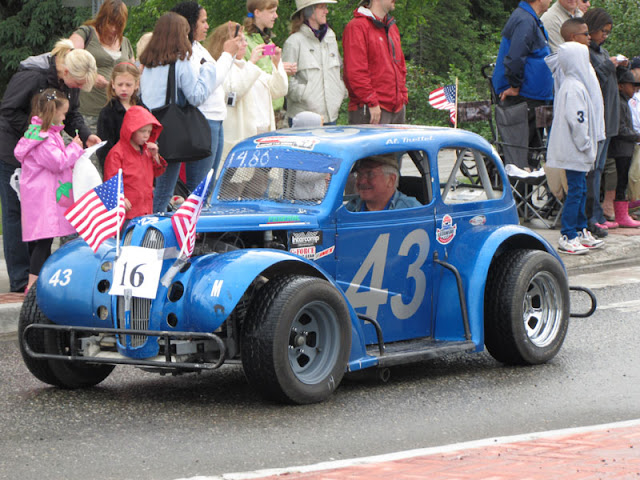 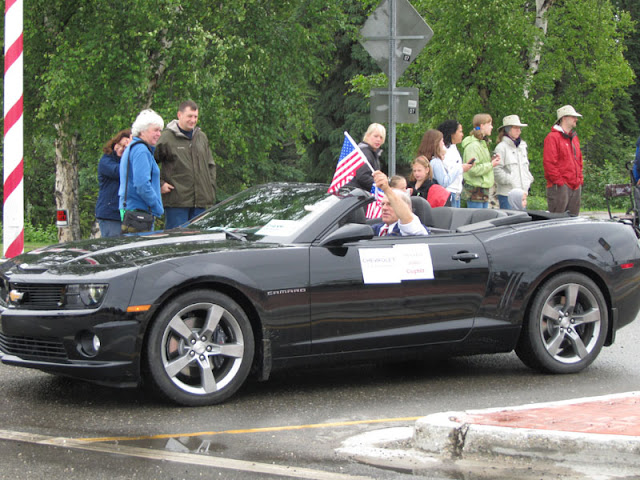 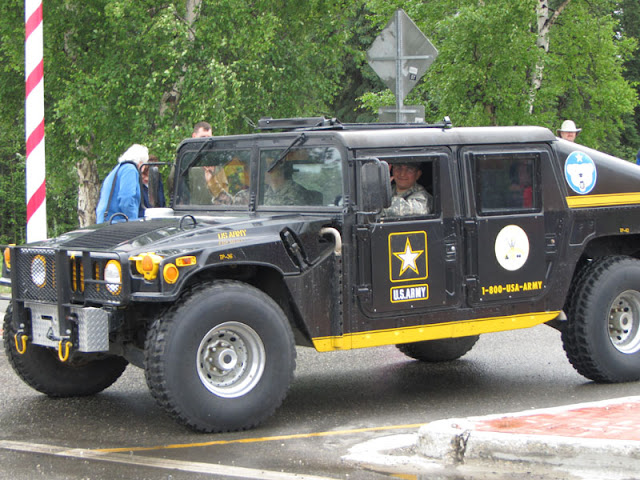 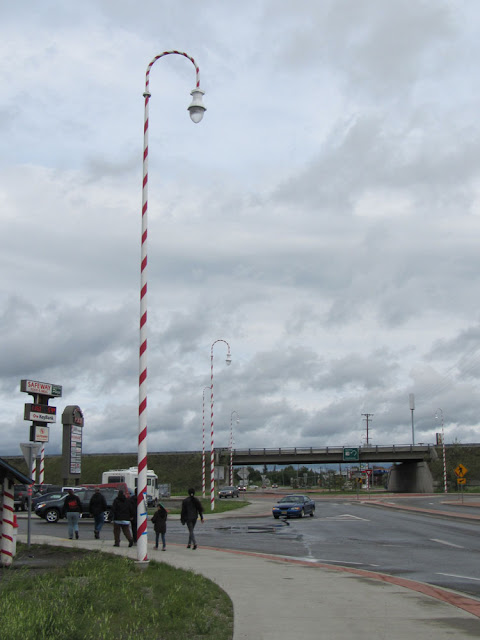 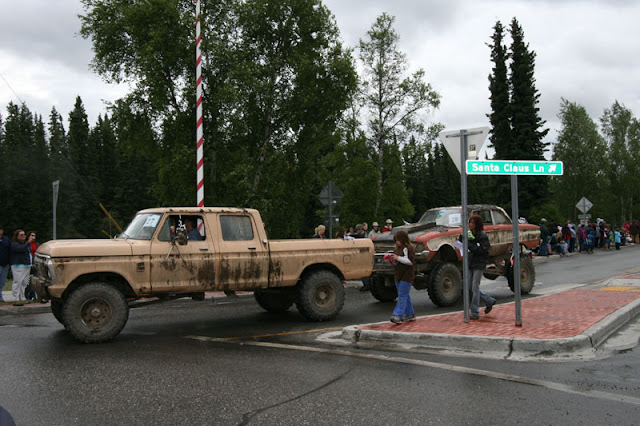 The parade turned out to be very low key, with less jingoism and military hardware than he had expected; less, in fact, than even Edmonton's Capital Ex parade, as he would discover just a couple of weeks later. The parade lasted barely a half hour, mostly composed of public servants such as firemen and policemen. He felt both disappointed and gratified, for in his own way he was amused by stereotypes, but more than anything he loved seeing them shattered.

Still, it seemed anticlimactic to drive thousands of kilometres for this. Impishly, a practical joke began to take shape at the back of his mind...what if the parade had been a little more lively? What if an Alaskan took exception to his Hawaiian shirt...? Might there be...an altercation? It was just ludicrous enough to have some credibility...

Well. Let that percolate a few hours. It was time to begin the journey home in earnest, to retrace his route in a more leisurely fashion. This time, he would stop to soak up a little nature, a little history. He had days, he thought; it would be wasteful not to take advantage of every minute.

Rain had spoiled his enjoyment of Fairbanks and North Pole a little, but as he wound his way back southward, it began to clear. He paused to snap a photo of the Alaska Pipeline: 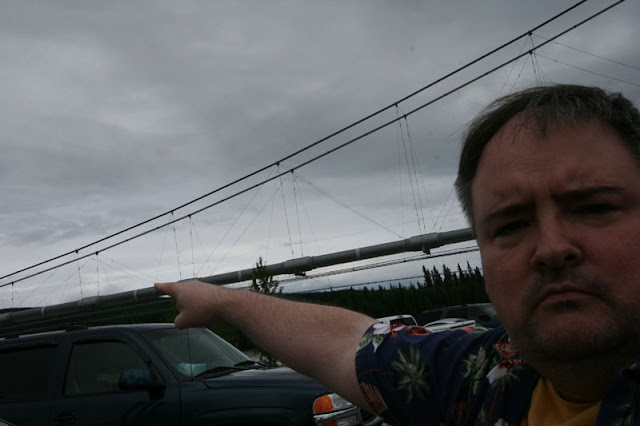 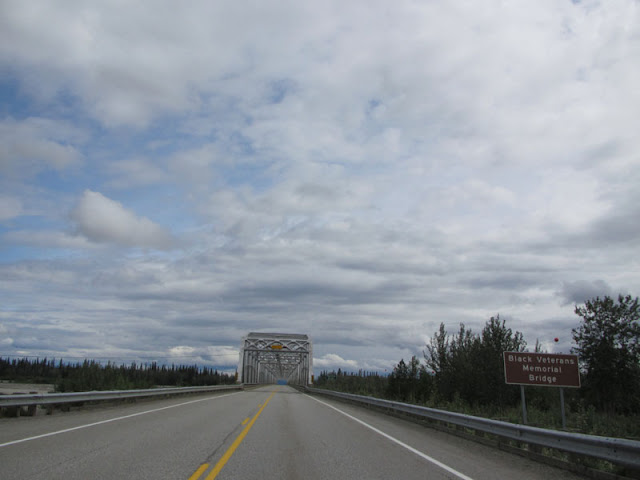 When he crossed this bridge, he imagined the conversation had his brother gone along with him:
"'Black Veterans Memorial Bridge.' Cool! Wait...shouldn't the bridge be...black?"
"It's whitewashed...just like American history."
Soon enough - somehow the drive home always seemed shorter than the drive out - he arrived again at Delta Junction, the official end of the Alaska Highway. He kept his promise and took the time to take some photos - some of them the delightfully silly sort that he so adored. He was no comedian, but it gave him great joy whenever one of his silly antics made someone laugh. The interpretive centre on the site of Mile 1422 provided ample opportunity for such silliness. 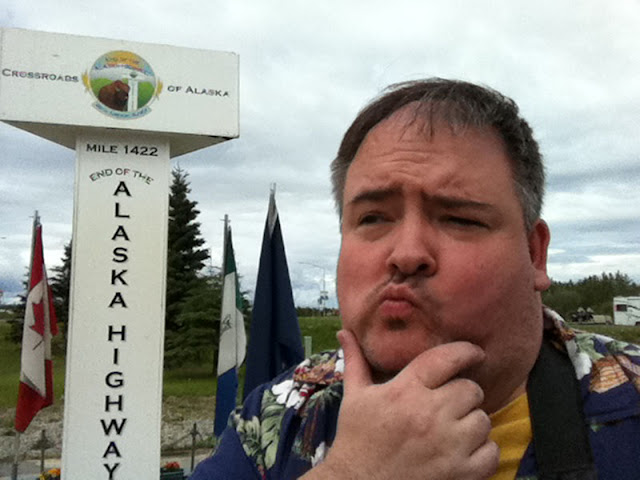 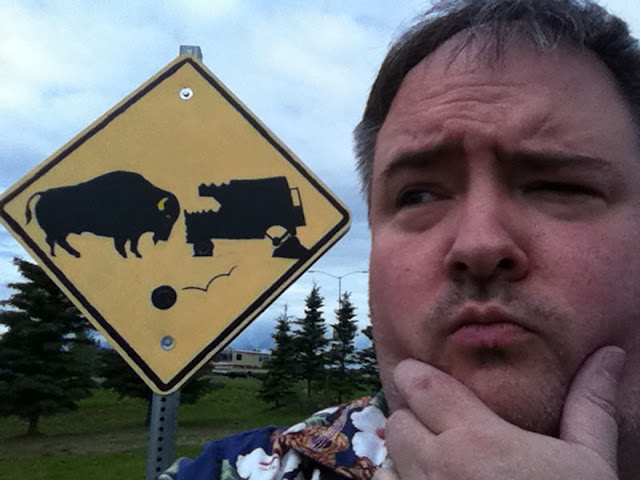 Once he excised the buffoonery out of his system, he strolled across the street to examine a number of 1940s-vintage construction and support vehicles, machines that had helped build the highway. 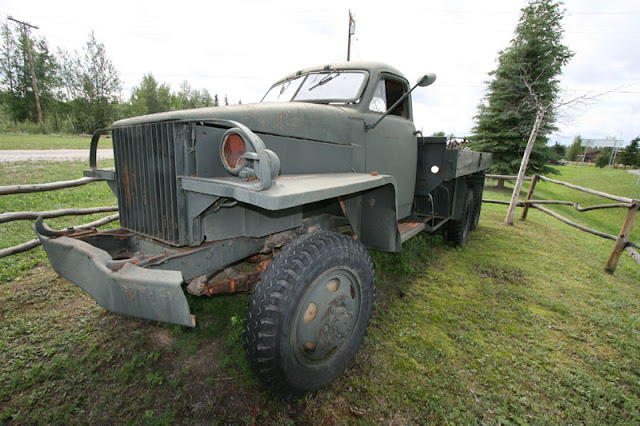 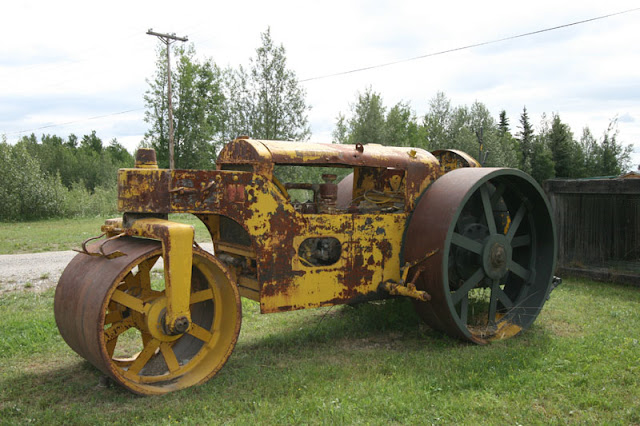 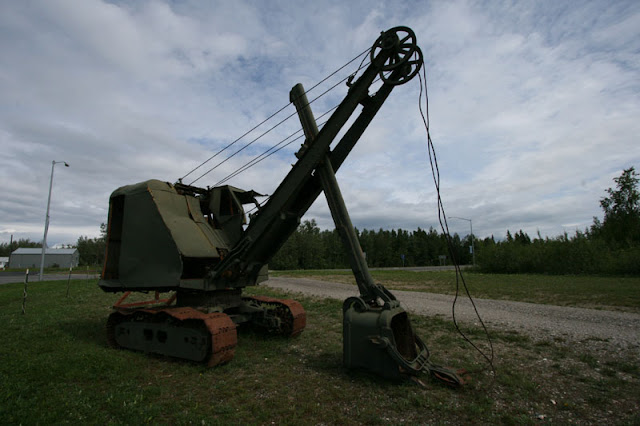 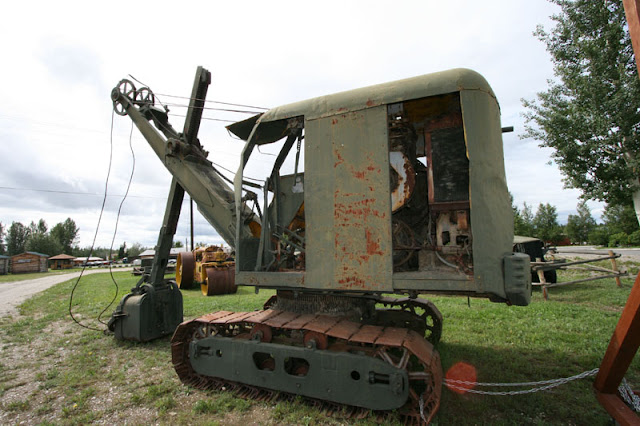 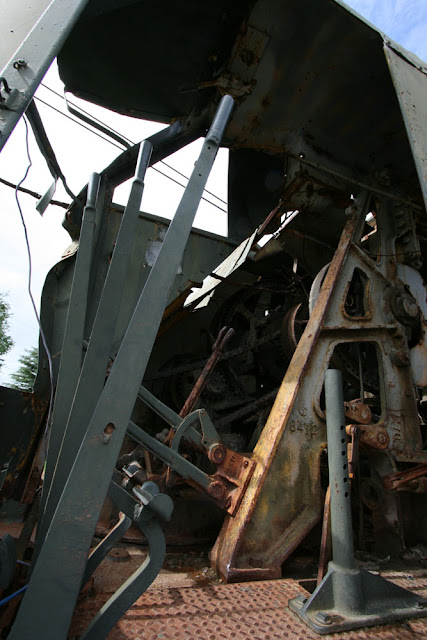 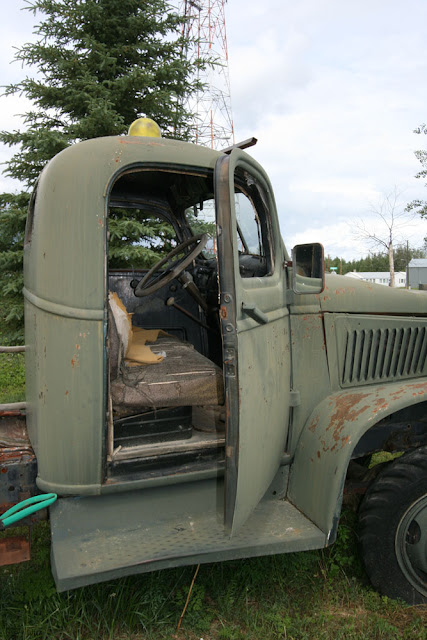 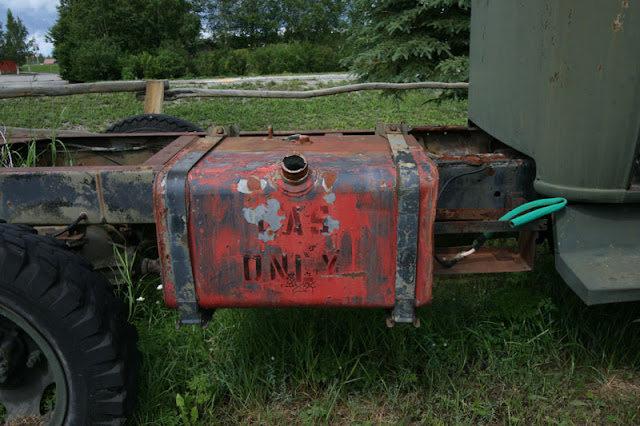 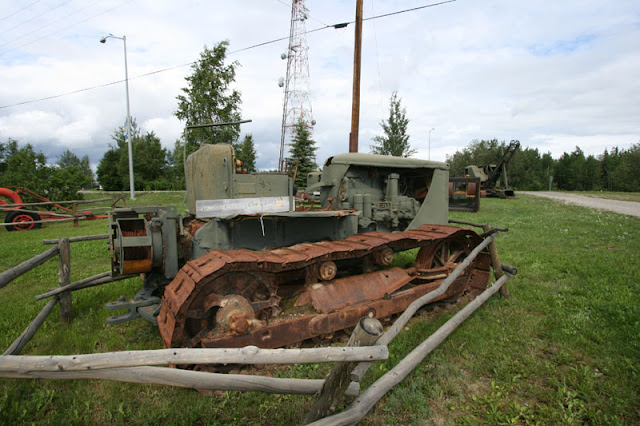 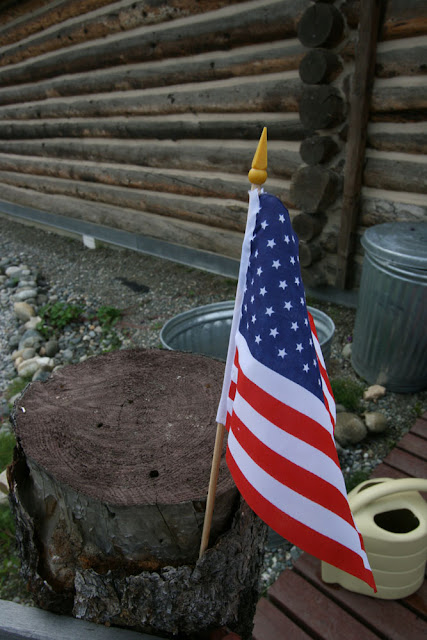 It didn't take long to see all that Delta Junction had to offer. Quaint as it was, Earl was once again feeling the irresistible pull of new frontiers; he decided that he would journey home not via the Alaska Highway, but by taking the famed Klondike Loop to Dawson City across the Top of the World Highway. 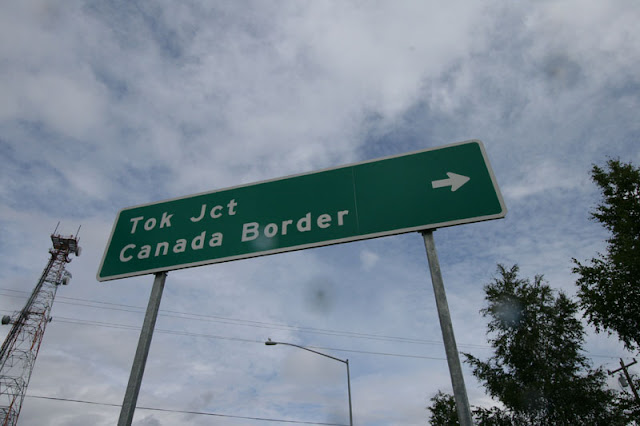 It would turn out to be the best and worst decision of the trip. But before he made that fateful detour, he stopped for dinner in Tok - dinner and a devilish prank, recounted here verbatim: 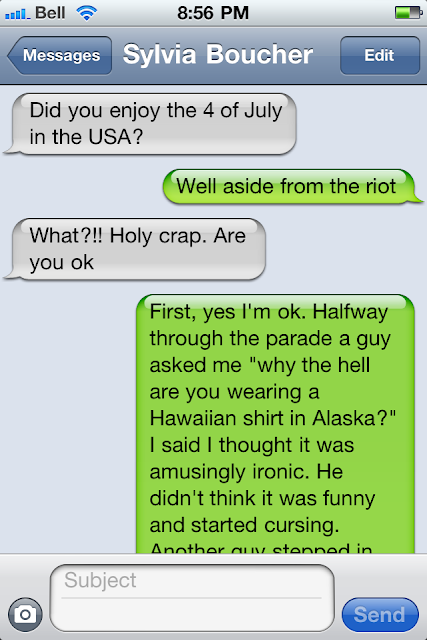 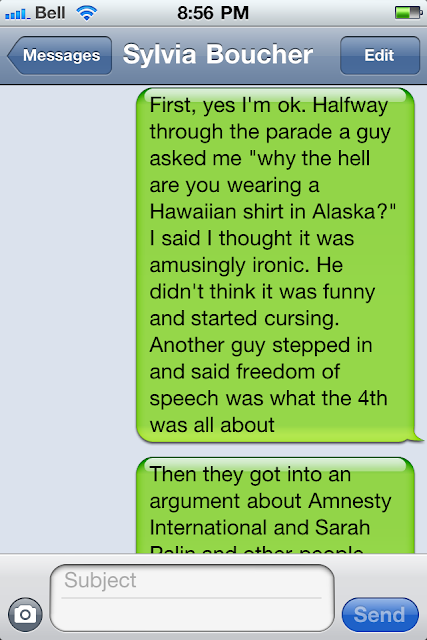 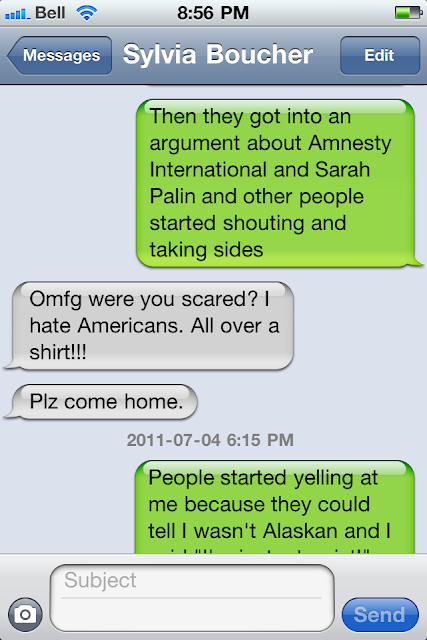 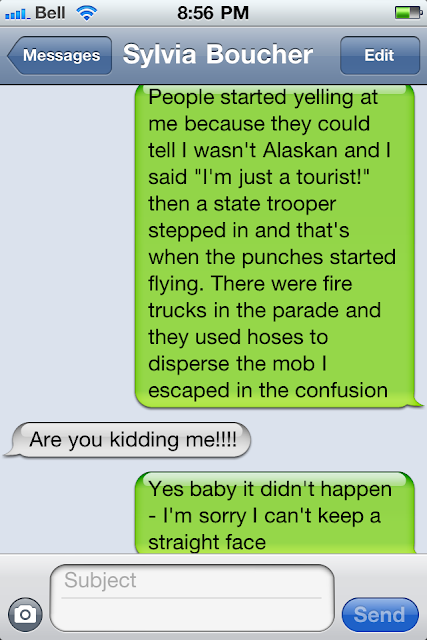 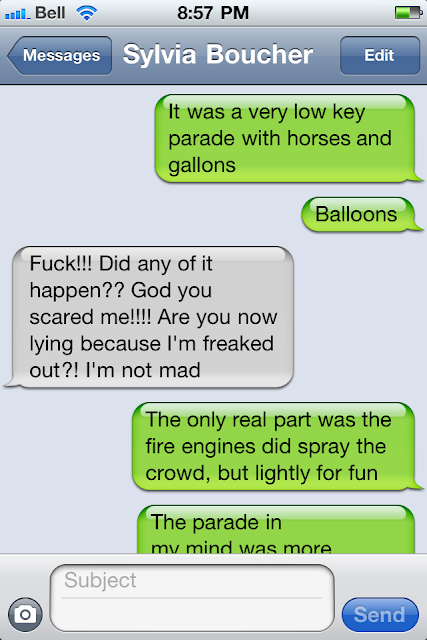 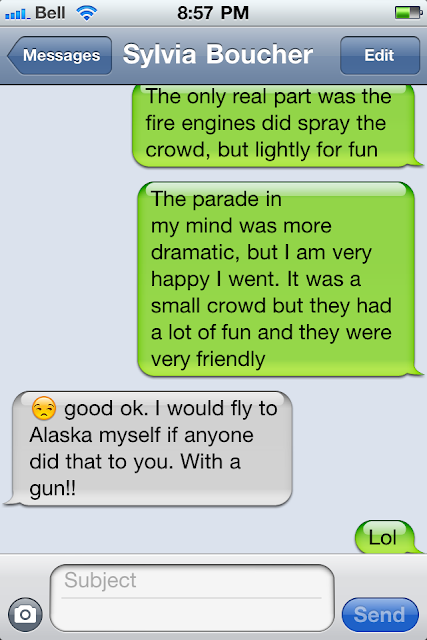 Sylvia's last exclamation both terrified and thrilled him, for he knew that she was perfectly capable of wreaking terrible vengeance on whoever did him harm. They shared a laugh over the prank, but fickle Fate would soon punish Earl harshly for his malfeasance...
Posted by Earl J. Woods at 10:35 am

Good grief, Earl, you are certainly out there on the bleeding edge. You were lucky to get away with wearing command gold with a Hawai'ian shirt in the U.S.A. Fortunately, Americans tend to be more tolerant towards these issues than the Internet media would have us believe. If I were you, though, I would not try the same stunt at any given gay pride parade, where the dress codes for propriety are much more strict.