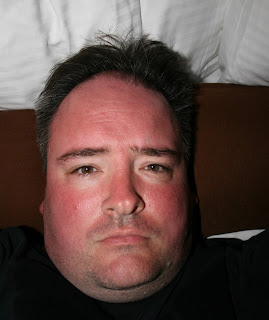 Whew! It's a scorcher in Alberta's capital today - enough heat to knock out power at the corner of 124th street and Jasper Avenue and to incapacitate my afternoon bus right at that very intersection. Dead bus + no traffic lights = cranky commuters, whether on public transit or private vehicles.

Fortunately another bus rescued the two dozen or so sweaty riders belched from the doors of our fallen carriage, and despite what seemed an interminable delay escaping the gridlock on the west end of Jasper, I made it to West Edmonton Mall in time to catch a transfer home. (Normally I walk from WEM to our condo, but today I was worried I'd catch heat stroke, as I so often have in the past.)

As a creature of the north, I still find Alberta's hot summer days uncomfortable, even many years after I should have acclimatized. Since my body refuses to accept that it doesn't live in northern Manitoba anymore, I've had to take precautions such as drinking lots of water and staying in cool basements or air-conditioned offices.

Stay frosty out there.