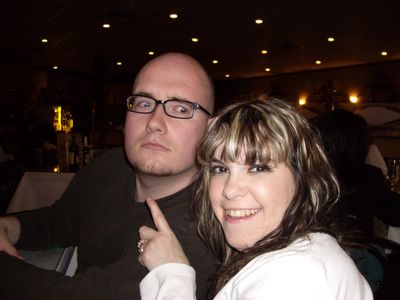 
My brother Sean has written a brilliant short story: A Boy and His Emu. Visit the Sean Woods All-Night Disco Blogorama now!
Posted by Earl J. Woods at 8:49 pm 1 comment: 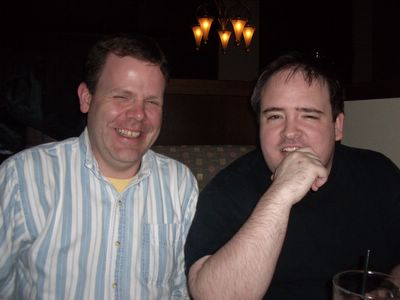 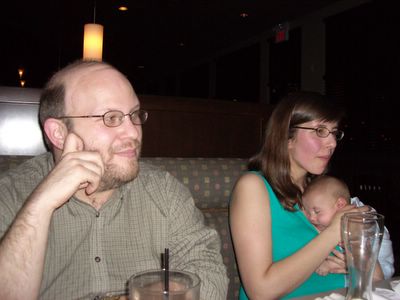 Michael, Naomi and Elliot think simultaneously, "This is going to end up on Earl's blog, isn't it."
Posted by Earl J. Woods at 8:44 pm No comments: 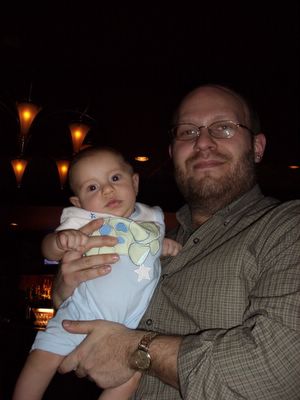 Michael Snyder donated his genetic material to create this amusing imitation of Mini-Me of Austin Powers fame.
Posted by Earl J. Woods at 8:42 pm No comments: 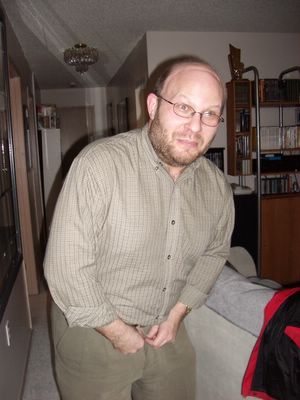 Email ThisBlogThis!Share to TwitterShare to FacebookShare to Pinterest
Labels: Michael and Naomi, Photography

Return to the Cheesecak Cafe 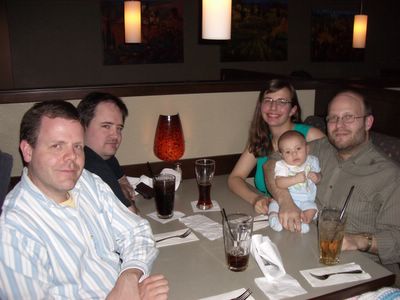 Just after writing about the origins of the phrase "Cheesecak Cayfee," none other than the Cheesecak originator himself, Steven Neumann, emailed me to say he'd be in town. So last Thursday, Steven popped over, along with our mutual friend Mike (AKA Dr. Michael Snyder, now a professor at the U of A), his lovely girlfriend Naomi (I didn't catch the last name) and their new offspring, Elliot (didn't catch his last name, either). Appropriately enough, we decided to gather at the Cheesecak. A good time was had by all.
Posted by Earl J. Woods at 8:33 pm No comments:

Last night, I dreamed I was watching 24. I was in the bedroom, and the television was providing the only light; I was hunched forward, fascinated as Jack Bauer and his Counter Terrorist Unit team chased down a suspect through an industrial park in Calgary. Jack and company were driving SUVs; the terrorist, a balding, toque-wearing Caucasian with a few days’ growth of dark beard, was driving a battered white Lincoln town car.

I was amazed that the show’s producers had chosen to make Canada the setting for this season. And not only that, Calgary city police had joined the chase, along with elite CSIS units. The vehicles roared along, tires squealing, dust flying – all the clichés were in place.

The suspect abandoned his vehicle beside a rust-brown warehouse with large, lime-green bay doors. He leapt out, and a CSIS agent was close behind, also on foot, toting a machinegun. The suspect rounded a corner and found himself trapped in a dead end; the CSIS agent shouted “On the ground!”, but the suspect merely turned and shot him.

“Argh!” I said, dismayed that the Canadian hadn’t made the arrest, that once again it was up to Jack to save the day. Any minute, and Jack would come thundering down the alley, disarm the guy, and they’d cut to the next scene.

But instead, the suspect turned to face the wall of the warehouse, and suddenly I noticed that there was a door there, a door with flaking paint and a battered old doorknob. The suspect opened the door and walked into the warehouse, and suddenly a flatscreen monitor dropped from the ceiling and hung suspended before his startled face. An older man with silver hair appeared on the screen and began speaking to the suspect in a foreign language. Subtitles translated his words, not into English, but yet another foreign language. It was clear, however, that the man on the screen was giving orders to the terror suspect.

Meanwhile, Jack Bauer and his team, along with several Canadian police officers, had found the body of the fallen CSIS agent. They tried to enter the warehouse via the same door the suspect had used, but found it locked. There was a brief discussion of what to do next, and it was decided that they would have to find a battering ram of some kind to break down the door. Moments later, they found a huge mobile crane, and Jack and his right-hand man hopped into the cab and started up the engine.

At this point, I became a part of the show’s cast; I was another CTU agent, and I watched as Jack and his friend revved the crane’s engine and drove towards the warehouse. I ran behind, accompanied by a Calgarian police officer, and watched as the crane smashed through the warehouse wall. There was a tremendous explosion of dust and debris, and I was horrified at the scope of the crash. The police officer and I ran into the wreckage of the building, where we found Jack, burned and bleeding, coughing over the body of the other CTU agent.

“Are you all right?” I asked Jack.

“Jack –” I said, trying to warn him, but the suspect pulled the trigger and shot me in the upper chest.

“Ah, dammit,” I thought. It really, really hurt, and I realized that I was dying. The suspect was telling Jack to surrender, to put his hands behind his head, and all I could see was my life spinning away into darkness. Everything went black.

But then I thought, “I don’t have to die. I can survive this.” So I focussed my will, and moved the bullet higher up, into my left shoulder, where the wound would be painful but not fatal. Then, I played dead as the suspect, joined by some of his comrades, put me in a body bag. They dragged me across the warehouse floor, into a space made up of office cubicles. The floor was cold and it was hard to breathe without giving away the fact that I was alive, but somehow I managed.

Time passed. The terrorists (and Jack) went away, and office workers started to file into the warehouse – which was now more like an office building. Soon I was surrounded by curious professional women, one of whom pulled off the body bag, lifted one of my legs, and rapped me hard on the left testicle. I couldn’t play dead through that, and I jumped up with a yelp of pain. The women jumped back, and I turned to one of them (played by whichever actress plays the mother on That 70s Show) and pleaded with her to help me. She hesitated, and suddenly Lesleah Horvat, head of the floral department at Hole’s walked into the office. She was surprised to see me, and I was equally shocked by her arrival. She said she was meeting with someone to arrange flowers for a wedding, and I realized that it was the head terrorist himself, the man on the video screen, who Lesleah would be talking to.

This made my situation even more precarious, and so the woman I asked for help agreed that I could hide under her desk. I did so, once again trying hard not to make any noise. A difficult task, considering it was all I could do not to whimper in pain from the bullet wound!

I waited under the desk. The light changed as the sun moved through the sky, and I watched the patterns of shadows move across the floor. Eventually it was night, and I crept from under the desk.

I was surrounded by good-looking Asian people in business attire. A friendly woman spoke to me, but I couldn’t understand her; she wore a nametag, but it was in Chinese or Japanese script. I wandered through the cubicles, looking for someone who spoke English, but no one could help me, though clearly they wanted to.

Eventually, I made my way through the cubicles and found myself in the lobby of a large metropolitan airport.

“Where am I?” I implored. A group of young Caucasian men in their twenties looked over at me.

“You’re in Canada,” they said.

“Who’s the mayor of Calgary?” one of them asked.

“How should I know, I’m an American!” I said. At least, I was playing an American on the show, so I reasoned that I shouldn’t know who the mayor of Calgary is.

“You’re in Edmonton,” one of the men said.

“Edmonton? Why would they send me to Edmonton…unless…because they know that I’d know where to hide!”

I ran down the corridor. The airport changed into the University of Alberta campus, into the Central Academic Building. There were klaxons blaring, and students were running everywhere; terrorists were on the campus, gunning down everyone they encountered, and I knew that they were looking for me, and that I was causing all this destruction.

I ran into the biological sciences building – I knew that the crazy architecture there would offer me someplace to hide. I headed for the basement, leaping down the stairs, and there on the bottom level I found Jim Hole.

“This way!” he said, pointing to an elevator door half-submerged into the floor. He pried the doors open and I jumped in feet first, landing on the elevator floor – which was, in fact, another set of doors. Jim closed the door above me, waving his hand as if to wish me well, and for a moment I was in darkness. I could hear a distant rattle of gunfire.

I knelt on the floor and forced the doors apart, slowly. Light burst through the widening seam, and I felt as though something good waited on the other side…
I dropped through the doors, and awoke.
Posted by Earl J. Woods at 3:18 pm No comments:

In Remembrance of Cheesecaks Past 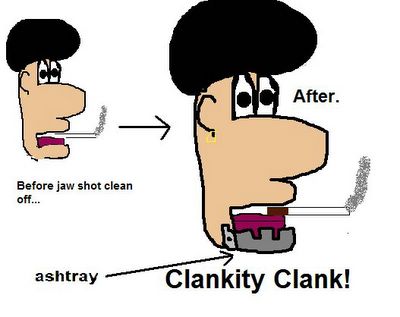 Young we were, and golden-eyed...

The way I remember it, it happened in my car - the '82 Corolla. Steven and Susan and Tony and Ron and Jeff were in the car, and we were wondering where to go for dinner. The Cheesecake Cafe was one of our normal hangouts, and so Steven suggested we go there...or at least, he tried to make that suggestion.

"How about Cheesecak?" he said.

The response was merciless. We all started to guffaw as Steven stumbled over his words, and Tony immediately piped up, "Cheesecak Cayfee!"

And so, the Cheesecake Cafe became the Cheesecak Cayfee forevermore. But more importantly, it inspired a Paladin of Order (or was it a Minion of Chaos?): Cheesecak Shakspear. And it led to yet another round of back-and-forth nonsense. It's impossible to say who said what at this remove, but it went something like this all night:

Which, later on, led to the great jaw-replaced-with-an-ashtray meme: "Broke m' lower jaw clean off and I had to have it replaced with an ashtray, CLANK CLANK"

And of course, any story involving blunt trauma damage to the jaw has to involve Paladin of Order, Jake Radish, Tooth Shootist, who never shot until he saw the whites of their teeth. Said passerby Sean Woods,

"I’m amazed he can shoot out teeth while leaving the jaw relatively unharmed.

That’s the mark of a good Tooth Shootist."

“Then guy smiled and BANG!, a shot went off behind me. I turned to see exactly who fired the gun, but I didn’t see nothing. I looked back at the dude, and all his teeth were gone. It was one heck of a shot – I’m amazed his jaw wasn’t shot clean off.”

“I says to the guy I says ‘You’re lucky your jaw doesn’t need to be replaced with an ashtray.’ ”
Posted by Earl J. Woods at 7:12 pm No comments: