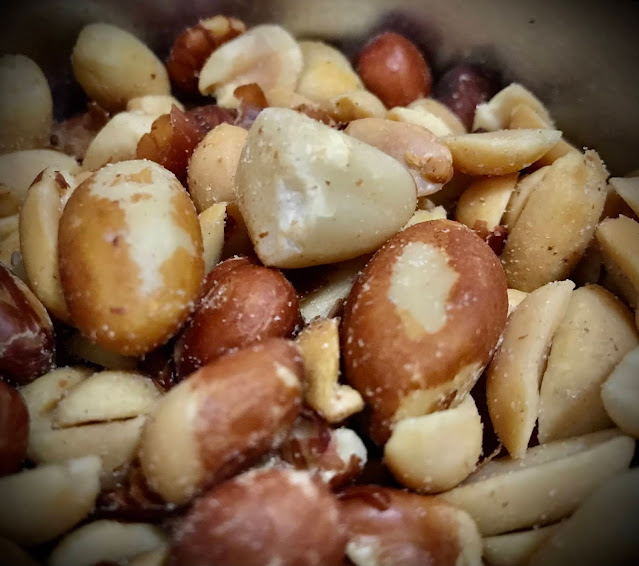 Yes, resting atop the pile of mixed nuts, in defiance of granular convection (AKA the Brazil nut effect), were two-and-a-half Brazils. Astonished, I poked around with my finger and found a fourth Brazil struggling to reach the surface of the pile. I am almost afraid to explore further, but I don't want to look a gift nut in the ear, so I'll enjoy the three-and-a-half in my possession and celebrate if more turn up.
Posted by Earl J. Woods at 6:13 pm No comments: 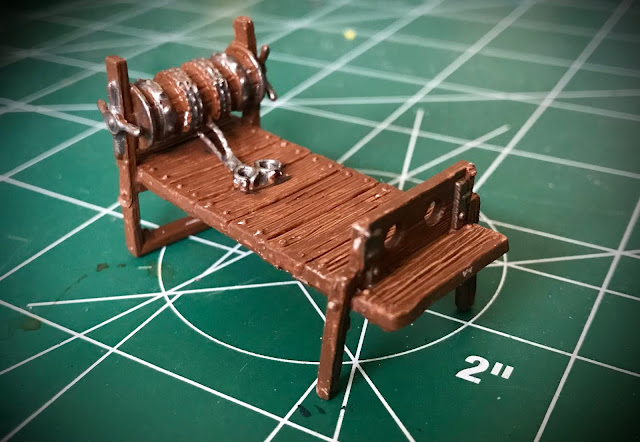 Here is a rack. Woe betide the adventurer who falls into the hands of the mad miscreant who owns such a device. 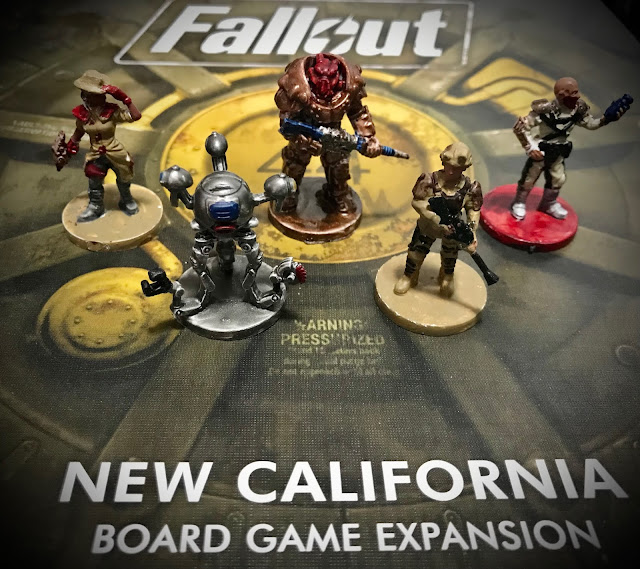 Months ago, I painted these miniatures for the Fallout: New California board game expansion. To my eyes, the Mr. Handy robot and the person in power armour turned out okay, while the rest are middling at best. I think my painting skills have improved since I tackled this motley crew.
Posted by Earl J. Woods at 6:38 pm No comments: 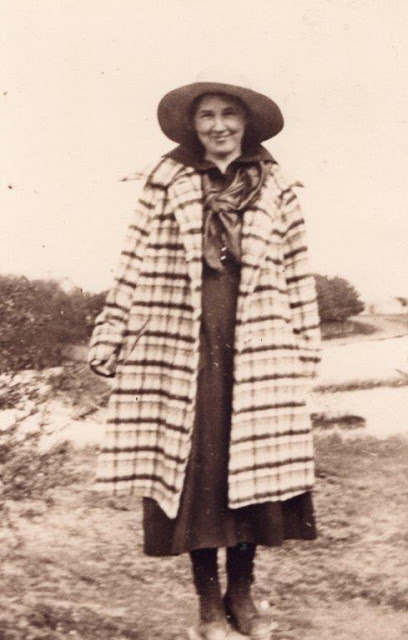 Our Mother's Day plans for this year were partially foiled by weather, COVID-19, and family illness, but Sylvia and I managed brief visits with her mother and mine to check in and wish them well. This Mother's Day I'm particularly grateful that Mom remains healthy and sharp-minded, and that she's now fully vaccinated against COVID-19. Fingers crossed this also means she's protected against the new variants bubbling up around the world, but luckily Mom is smart and cautious so I'm confident she's going to be okay.

Earlier today Mom sent over this photo of her mother, my maternal grandmother. It was taken on the Leask farm sometime in the 19-teens. She looks quite vibrant here! It's an image I've never seen before, and I'm grateful to have it - not as grateful as I am to have Mom, of course. 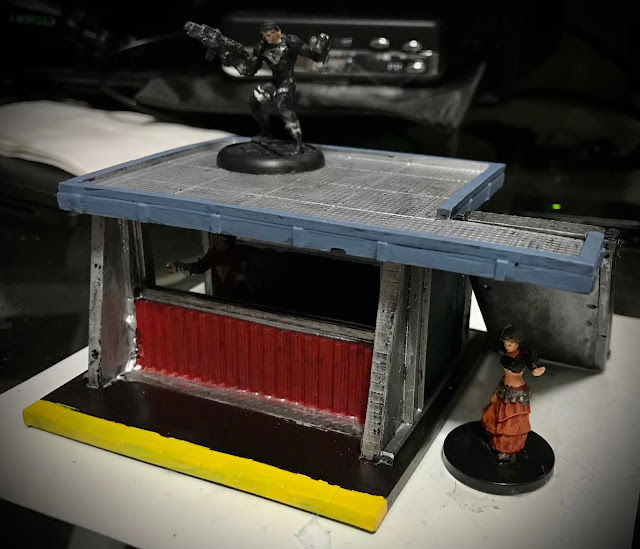 Here's a checkpoint or guard station or observation bluff, I'm not sure which. 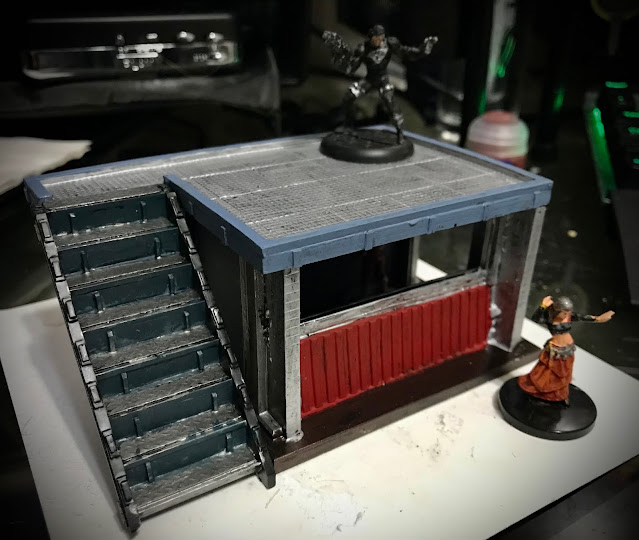 I feel like I should have perhaps used fewer colours. On the other hand, maybe in-universe this little building was simply painted by someone with bad taste or colour blindness. 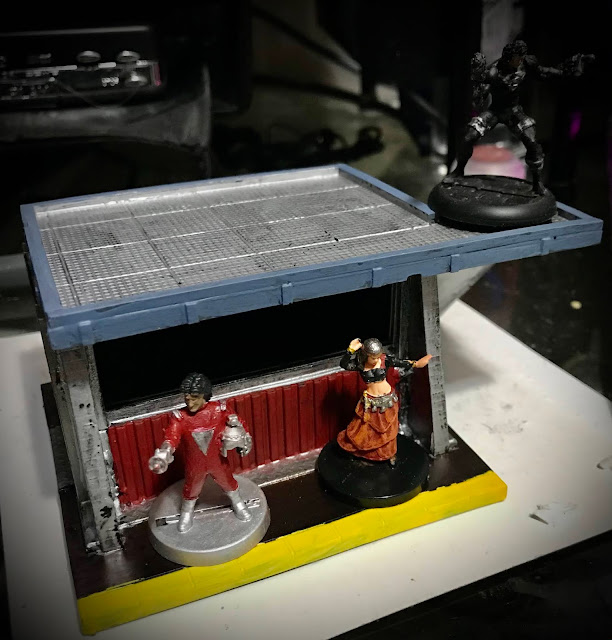 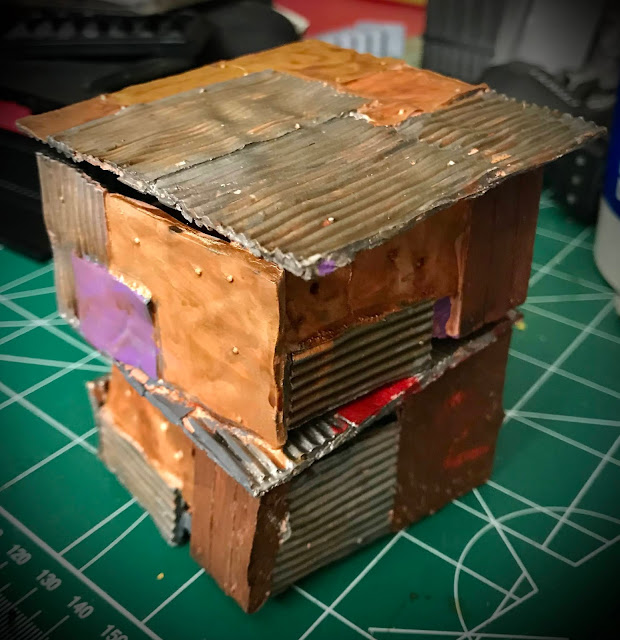 Here's a two-story shanty to accompany the smaller version I shared yesterday. Painting the insides after I'd already glued the top and bottom stories together turned out to be quite a challenge. You'd think I'd have learned this lesson by now...
Posted by Earl J. Woods at 9:02 am No comments: 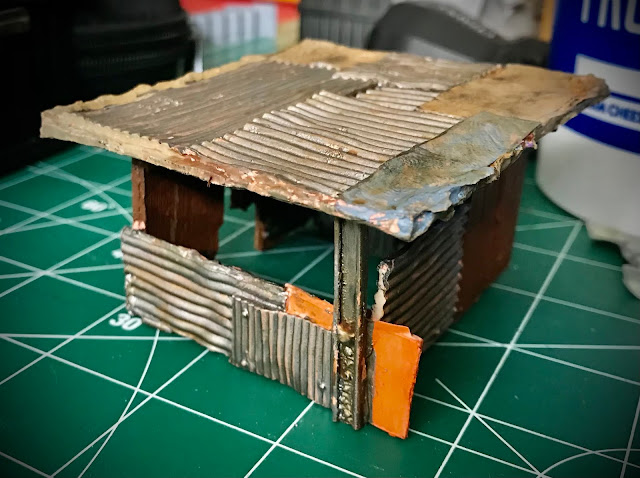 I painted a ramshackle shanty for the 28mm inhabitants of a post-apocalyptic wasteland. Part of a housing project for Fallout and other games.
Posted by Earl J. Woods at 3:30 pm No comments: 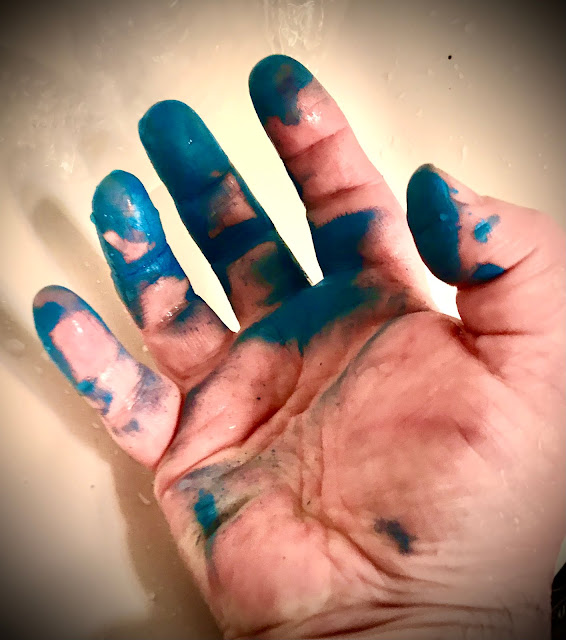 A sigil branded on a star
Signals seekers from afar
From one quintillion worlds they come
To the last snark, to the last boojum 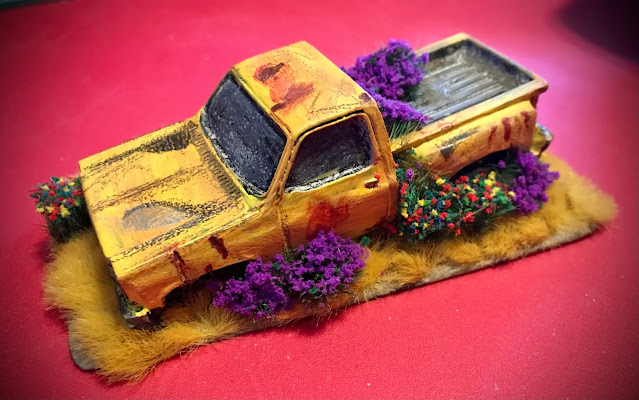 Here we find a pickup's graveyard, the wreck slowly being reclaimed by nature. This one was fun; I experimented with different shades of yellow, added rust and bare metal effects with weathering pencils, and added some vegetation to the base. Depending on scale, this might make a nice piece of scenery for Car Wars, a game Sean and I Kickstarted a while back that should finally reach us sometime this year. Not that we can play it yet, thanks to the pandemic...

Some more views of the truck: 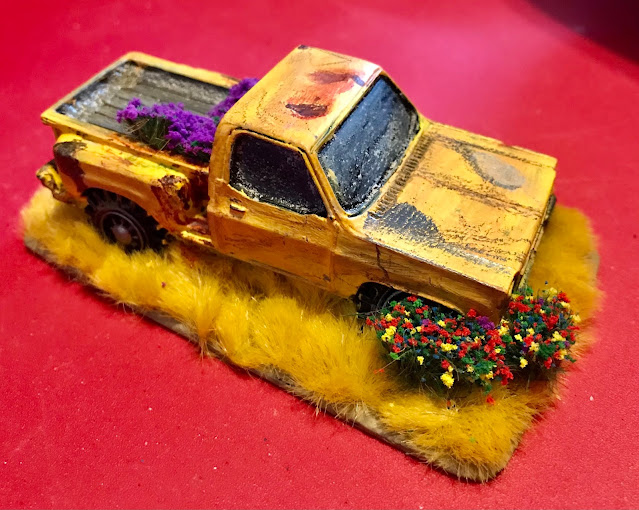 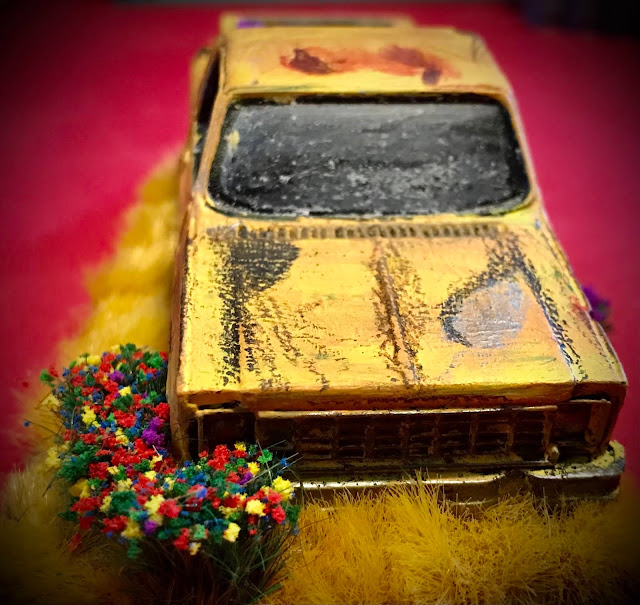 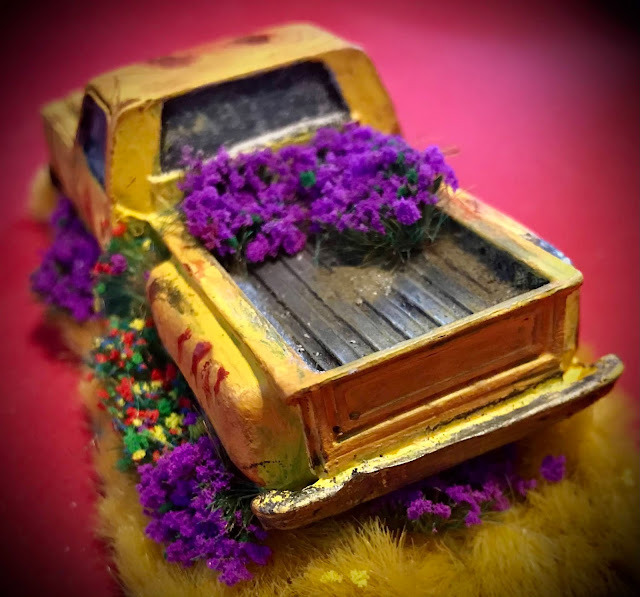 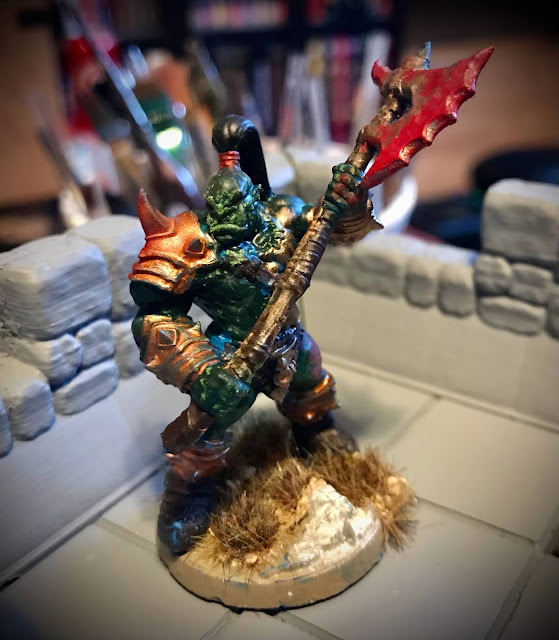 My friend Jeff bought a 3D printer a few weeks ago, and he's been experimenting with it. Last week, he brought me an orc he'd printed, which I gratefully painted today. I call him Nebbachyn, the Terror of Michandro. It's hard to see in the photo, but I experimented with different shades of green for the orc's skin in the hopes of adding a little more realism. I think he turned out pretty well. Thanks, Jeff! 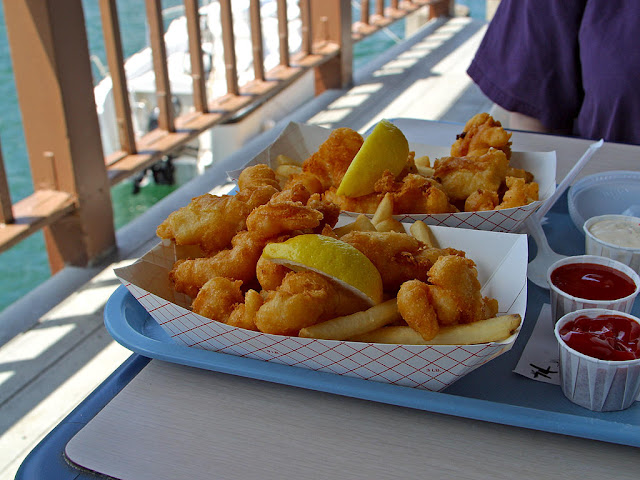 Whose idea was it to add breading or batter to fish? Fish is delicious when fried or seared, rich in flavour and texture. Breading it just masks the flavour and makes the whole dish feel much heavier than it should.

Maybe I'm spoiled. Mom and Dad used to catch fresh fish from the pristine lakes of northern Manitoba and clean and fry the fillets right at the campground. The pickerel and trout they prepared in those days remains my favourite meal of all time. All fish since has paled in comparison.

Even so, I can still enjoy fish if it's not wrapped in a casing of fried lard and butter.

Fish: better without the batter.