Here's some arcane imagery to make this special night all the creepier. 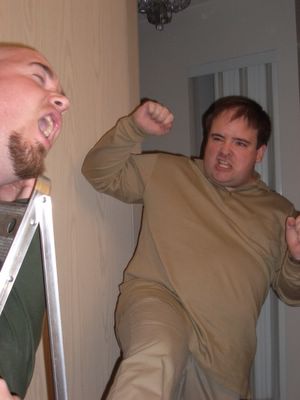 It's bad luck to walk under a ladder! 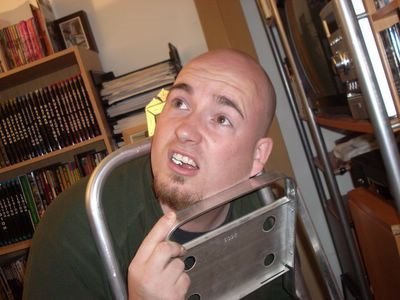 As Karen Black revealed in Trilogy of Terror, nothing is creeper than an action figure taken out of context. 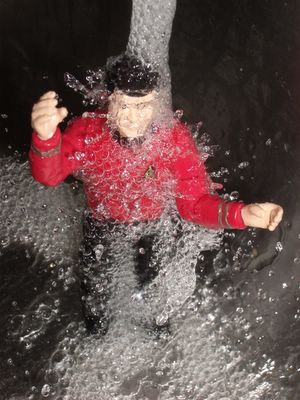 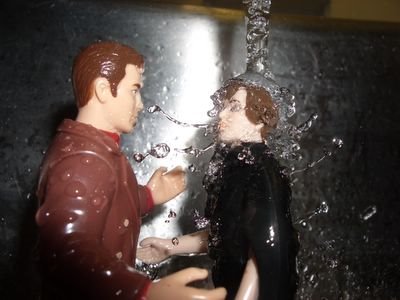 Sylvia and I carved another pumpkin this year. 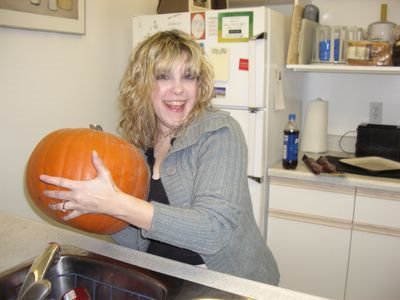 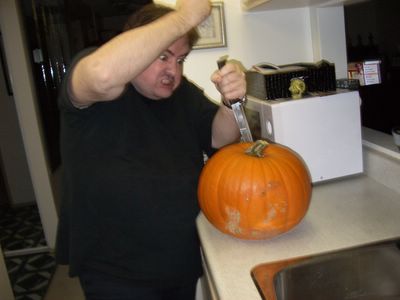 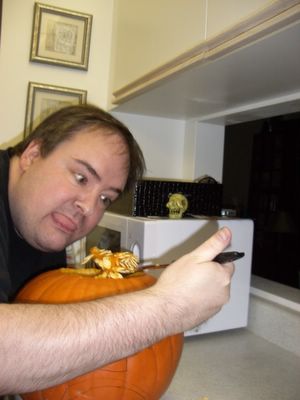 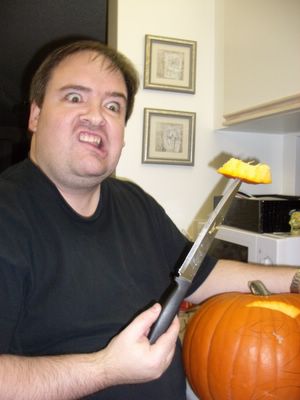 This year, I decided to go big or go home and CARVE SOME EYEBROWS 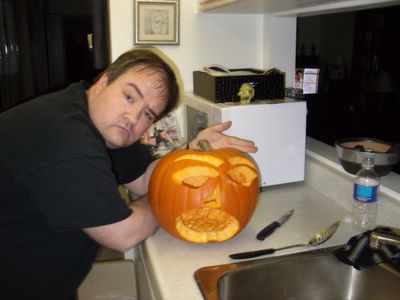 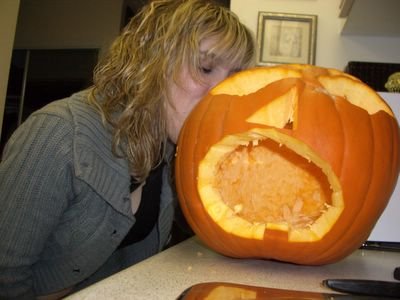 Sylvia bestows a witchy kiss upon the stunned Jack. 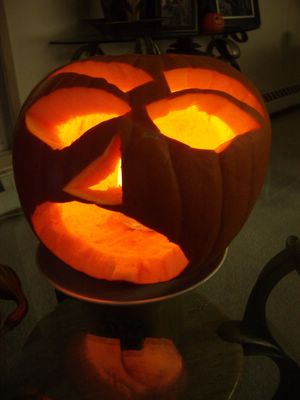 Knights of the Kitchen Table 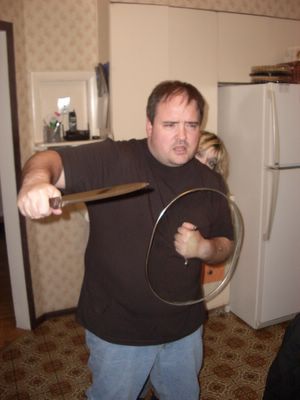 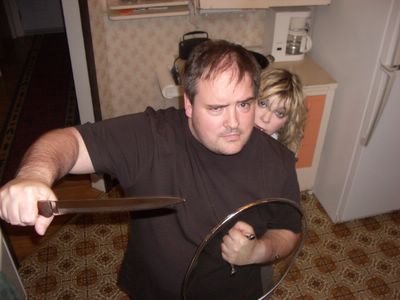 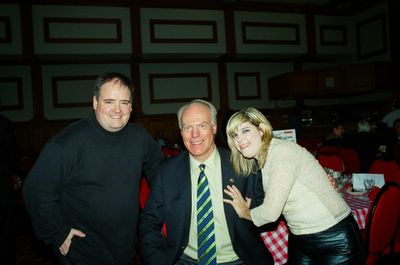 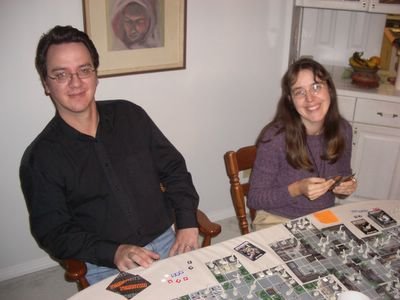 Jeff and Susan prepare for defeat 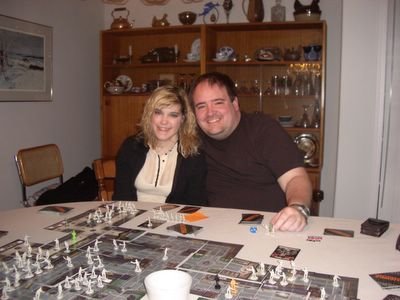 On Saturday, Sylvia and I drove down to Calgary to visit Jeff and Susan Shyluk, who were there to visit Jeff's parents. We first enjoyed two rousing games of Nuclear War - a board game from the height of the Cold War era with a darkly mordant sense of humour. Susan "won" the first game, eliminating the populations of all other nations, while everyone lost the second - a not uncommon result in nuclear war.

We then switched to a hard-fought game of Zombies!!!, using the mall, university and army base expansion packs. It was the largest game of Zombies!!! any of us have ever played, with dozens of ghoulish fiends littering the board and blocking all escape routes.

Late in the game it looked like Susan was going to run away with it, but in a last-minute berserker charge, I hacked apart a half dozen zombies and managed to make my escape in the helicopter, leaving my hapless competitors behind to serve as zombie chow. 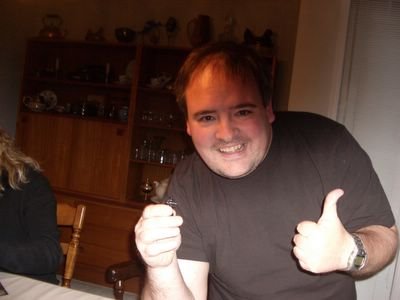 As Wesley Snipes quipped in the legendary Passenger 57, "Always bet on black!" (Note the colour of my game token.)
Posted by Earl J. Woods at 9:00 pm 5 comments:

Down to a Sunlit Sea 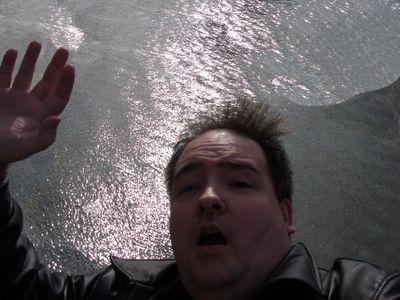 I beheld the choices all arrayed
In rows so neat the truth betrayed
Slipped past the precipice and fell
Tumbled, floated, adrift in cloudless space
Through a violet sky
Looked up and saw those choices recede
Looking down at me with misted eyes
Soundless

Fell without friction
No unquiet wind to disturb my peaceful descent
Down to a sunlit sea
Posted by Earl J. Woods at 8:51 pm 1 comment: 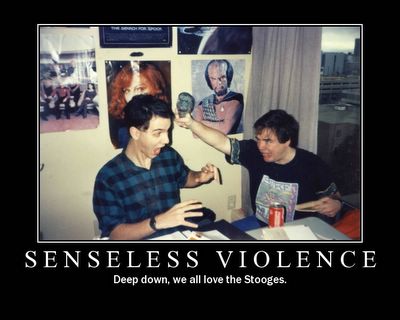 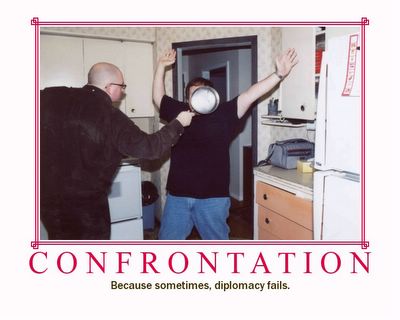 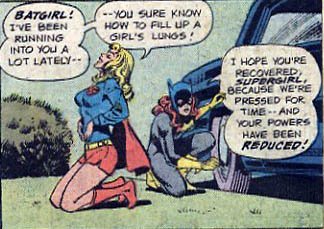 "Batgirl! I've been running into you a lot lately - you sure know how to fill up a girl's lungs!"

When I first read the issue of Superman Family that features this breathtaking panel, I was only seven or eight years old, and boy did it make an impression. Look how happy Supergirl is. Look at that pose! It all seems kind of blase to Batgirl, though - like she fills up superheroine lungs all the time.

"I hope you're recovered, Supergirl, because we're pressed for time - and your powers have been reduced!"

Is it just me, or is this panel chock full of subtle double entendres? Maybe I was only seeing what I wanted to see. Maybe I'm still seeing it.
Posted by Earl J. Woods at 9:22 pm 2 comments:

Do Not Touch the Space Brain 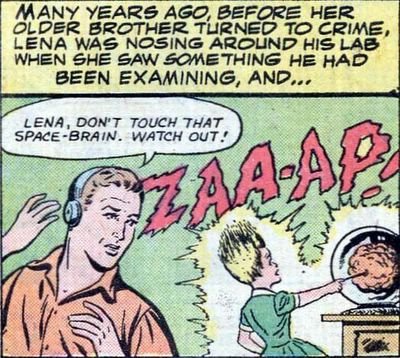 Not many people know that archvillain Lex Luthor has a younger sister, Lena. As seen here, Lex was once a doting older brother, though not quite doting enough to prevent his sister from getting zapped by a space brain. Why Luthor had a space brain in his lab was never explained. Nor did the storytellers ever explain how Luthor obtained a space brain, nor what poor space creature had to do without its space brain to sustain Lex's experiments. In fact, the space brain's one and only appearance is this single panel; it was merely a throwaway plot device to give little Lena telepathic powers.

I wish I lived in a comic book. Touching a space brain in the real world is unlikely to grant you super-powers. Not only that, but what in our world would be the scientific find of all history is treated here like any common lab specimen. Space brain? I have a dozen of those. I store them in the cabinet with the Philosopher's Stone, which I use as a paperweight for my Unified Field Theory.
Posted by Earl J. Woods at 7:47 pm 2 comments: 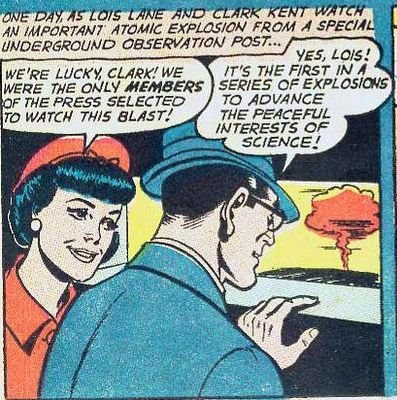 Clark, you were so damn naive.

Harper's has posted a fascinating article on how the USA's right wing has used an old German myth explaining the outcome of World War I - that of disloyal elements "backstabbing" patriotic Germans - to win elections and divide the American public. According to the article, they've been doing it since the Second World War, and the chickens may finally be coming home to roost.
Posted by Earl J. Woods at 10:07 pm No comments: