Seconds ago, my phone rang:

"Hello, is this the place where you get the mattresses?"

Email ThisBlogThis!Share to TwitterShare to FacebookShare to Pinterest
Labels: The Earliad, Weird 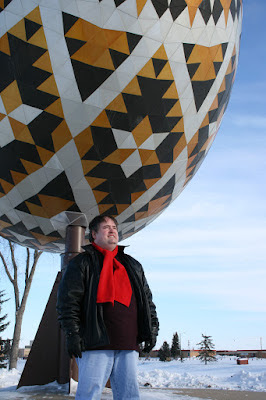 With the Alberta General Election of 2008 over, I can return to blogging! As you can see from the last couple of posts, my original plan was to blog as I campaigned, but I quickly discovered that there weren't enough hours in the day for writing - let alone eating and sleeping.

While the outcome of the election was disappointing for me (for those of you who haven't heard, the Progressive Conservatives won still another overwhelming majority), I have no regrets whatsoever about running. It was a profound experience. I had the privelege of meeting hundreds of Albertans, I had fun with a wide variety of media outlets (and thanks to CBC, Global Television, CKUA, CTV, City TV, the Sturgeon Creek Post, Edmonton Journal, Edmonton Sun and Fort Saskatchewan Record for covering my campaign!), and enjoyed the support of dozens of friends and family members. I also had a lot of fun at the Candidate Forum in Fort Saskatchewan, though I do wish the Premier had shown up to debate.

For the record, I came in second in my particular race, with a little over 1300 votes. Premier Ed Stelmach, as many expected, came in first place, with over 11,000 votes. With a result like that, you have to laugh a little - I believe that I must have the record for "number of votes between first and second place." Almost a 10,000 vote gap! I was right on his tail.

I'm very proud of my fellow candidates and the many staff and volunteers who poured their hearts and souls into this campaign. Every one of them participated in this race because they genuinely believe in the importance of good government and of serving the public with diligence and compassion.

To many people, politics is a dirty word, a necessary evil. But I've always felt that politics is about solving problems, helping those in need, managing resources for the benefit of all, and perhaps most importantly, building a better tomorrow for our descendants.

Stepping forward as a candidate felt a little arrogant. I asked myself time and again, "Who am I to suggest that I can help run a province? Do I really think I can solve problems that people smarter than me have wrestled with for decades?"

I don't know the answers to those questions. But I do know that if nobody tries to solve our problems, the problems will only get worse. And I believe that democracy will be better served when people of all cultural, economic and philosophical backgrounds feel comfortable enough and have sufficient resources to run for and attain public office.

Just a few scattered thoughts as life returns to normal. Thanks to all my readers (all nine of you) for bearing with me.
Posted by Earl J. Woods at 3:15 pm 3 comments: