Return to the Dungeons 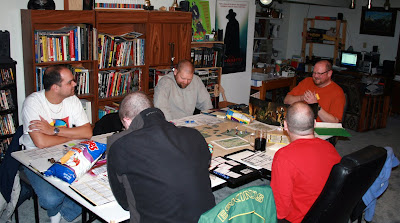 On November 21st, my friend Stephen Fitzpatrick hosted the first round of Dungeons & Dragons any of us had enjoyed in years. Excepting the one-off "Nerdieth Anniversary" event about five years ago, it's been close to two decades since the last time I rolled up a D&D character.

For those unfamiliar with the game, D&D is a special sort of amusement, part boardgame, part storytelling. Each player creates a character with a set of mental and physical attributes and personality quirks, and the referee of the game, or "Dungeon Master," facilitates a kind of collective storytelling session, with each player taking on the role of his or her character. Dice rolls to determine whether or not any given action is successful add an element of chance to the game. 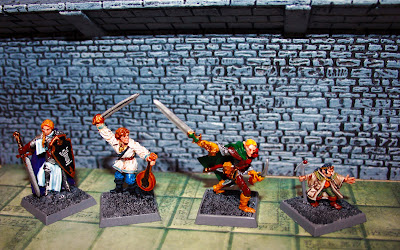 Stephen happens to be a wonderful painter of the pewter miniatures used to represent player characters in the game, and in the photo above you can see some of his work. I apologize for not having written down the character names, but from the left we have Audrey's paladin; my bard, Timbre Wavecrest; Jeff's elf ranger; and Mike's gnome spellcaster. Minatures for Pete and Scott are missing, since theirs haven't arrived yet. (They used temporary placeholder miniatures, seen in some of the shots below.)

"Well, it's sort of like a travelling musician. I have a lute and I sing and play music to inspire the other characters to greater heights of heroism. And I wear this cool poofy shirt."

"I'm not the gay guy," I said, flustered, "Not that you couldn't play a gay character if you wanted to, but I happen not to be gay - I mean, the character isn't gay. Neither am I, of course. Anyway, just because you have artistic ability in the game doesn't mean your character is gay, just like in real life." 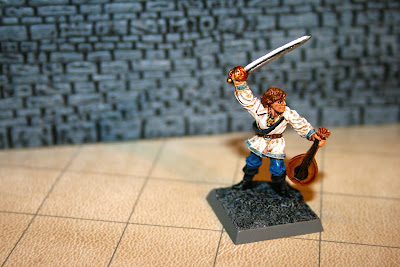 I thought I had a sort of 70s rocker thing going...

Our story began at the sort of quaint little town familiar to any seasoned roleplayer, with an assortment of colourful supporting characters and a plot hook to get us started. In this case, our merry band, looking for work, took on the task of tracking down the kobolds (think miniature wannabe dragons) who'd been raiding a supply caravan.

We followed the trail of the kobolds to a dungon and blundered our way into combat. Note that my character has cleverly placed himself at the rear of the party, in relative safety. The monster to the right is a kobold weilding a sling. The green rectangle with squiggly lines represents a pit full of some kind of nasty fluid. Stephen hinted that we probably didn't want to fall into that pit. 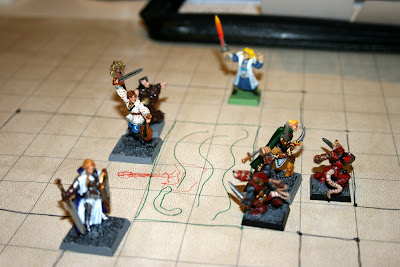 We waded into battle with a will, dispatching the first group of monsters with relative ease. I actually mocked one of them to death with the power of my mighty charisma. Note the bloodstain on the floor leading into the pit - Mike's gnome used telekinesis to squish and drag one of the poor creatures to his death. 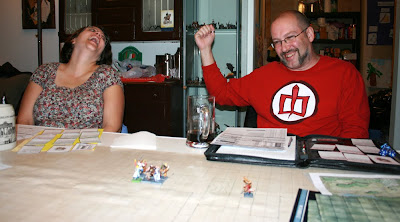 Audrey and Pete just before a roll of the dice.

Having slain all the monsters on the first floor, we boldly made our way down the stairs to the next level. Once again I bravely led from the rear, strumming my lute and chanting inspirationally, safely out of range of projectile weapons. We came across another group of kobolds, this time playing some kind of macabre game called "skulls," using a heavy wrecking ball hung from the ceiling to knock over piles of skulls, carnival-style.

Unfortunately the wrecking ball also made a handy weapon, bowling a couple of us over. Poor Jeff's ranger was nearly overcome by vicious dogs, bleeding all over the rank dungeon floor before we were able to rescue him. Fortunately the healing powers of Audrey's paladin were enough to sustain his life force. A close call! (As in real life, Jeff winds up the most badly injured of anyone in our little group! He's had a bit of bad luck with pratfalls.) In the end we prevailed and pressed onward until the late hour forced our middle-aged real-life bodies back into bed. To be continued whenever we can all get back together again - probably not until January, real life being what it is, brashly intruding upon our geeky pastimes.

Dungeons & Dragons, or any of the hundreds of other role-playing games, are great for anyone who loves storytelling, improv, and the theatre of the absurd. I'm grateful that Stephen offered to escort us down those hallowed dungeon halls again, and I look forward to the next exciting episode.

Yeah, that was a good time, and the new 4th ed. rules have a sweet blend of old school 'anything goes' improv and a detailed boardgame. Highly recommended for those who like to spend good times with their friends and don't care whether or not other people think they are cool! (Or just don't tell anyone...)

Hye! I'm just living life to the fullest. If i happen to get hurt on the way, oh well. I'm just taking chances cause i love life!