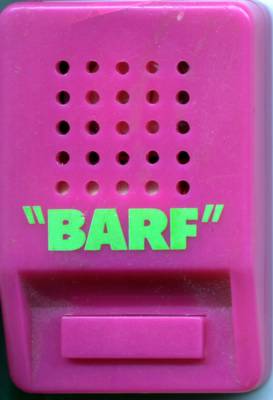 But all that is incidental to the tale of the Barf Thing. Februrary 25, 1992, was my twenty-third birthday, and Ron Briscoe, that loveable rogue, found the Barf Thing in a souvenier shop. I was agog with delight when Ron presented me with the gift, for not only did it sport a ghastly colour scheme, with the word "BARF" emblazoned across its ichor-pink surface - in uppercase, emetic green letters, no less, complete with quotation marks - when you pushed the big button (as you must) the delightful device spoke!

Or, one should say, ejaculated: "UH-uh-HUH-ah-HOOO-AHH!" A wretched song of retching! My glee was unparalled, and I pressed the infernal button over and over, until all and sundry regretted Ron's ill-fated choice.

In an effort to appease my fellow travellers, I secured the Barf Thing in my bag for the return trip. But alas, the road was rocky, and with each and every bump, the Barf Thing would offer its sole comment on the nature of existence.

The Barf Thing is with me still, a dozen years on, and still it croaks out its unholy song (thanks to a much-appreciated repair job, about five years ago, by my friends Allan and Chris).

Elvis Haiku and Leaping Over the Garden 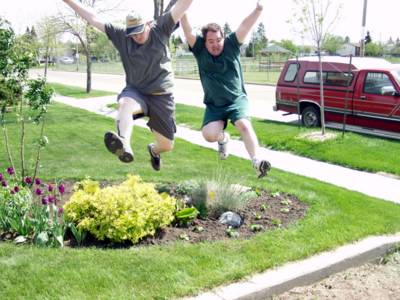 My brother Sean and I were goofing around last month at my parents' place; here's my favourite action shot. (Click for a larger version!)

I can't remember if I've posted this before, and I'm too lazy to check. So...enjoy some Earlian Elvis Haiku.

Baby girl married a froot loop
Spinning in my grave
Or I would, if I were in it

Young Elvis or Fat?
That's me on the stamp
The glue's good eatin'
Posted by Earl J. Woods at 11:22 pm No comments: 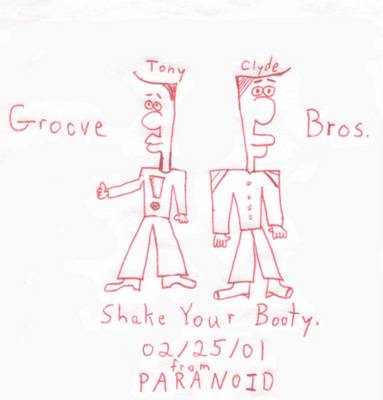 Racing Up the Charts

What Grows Here? is now at #5 on the Edmonton non-fiction charts!
Posted by Earl J. Woods at 7:12 pm No comments: 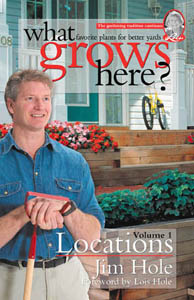 Invincible Earl Has Nothing to Fear 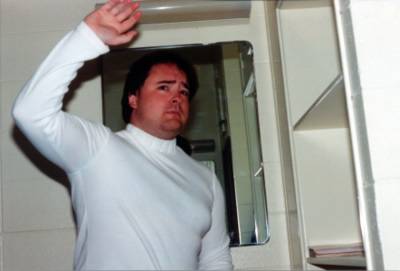 Invincible Earl has nothing to fear.
Posted by Earl J. Woods at 8:03 pm No comments:

Have you ever fantasized about having some kind of superhuman ability? I have. Usually I like to imagine having the power to fly. But sometimes, it's fun to think about what I'd do if I had Superman-level invulnerability.
If I were indestructible, I'd go up to the top of skyscrapers and jump off, leaving a huge crater in the sidewalk. WHAM! I'd have people fire cannonballs at me. I'd launch myself from a catapult and crash through the front window of a grocery store. I'd put a lit stick of dynamite in my mouth. I'd have a friend hit me in the teeth with an axe or a sledgehammer. I'd be the world's highest-paid stuntman! I'd dare the US government to drop an atom bomb on me. I'd become an astronaut and do EVAs without needing a spacesuit. I'd become a stormchaser and hope to get flung into the air by a tornado. I'd be the most extreme rollerblader ever, pulling totally wack moves that will make my skater buddies swoon with envy.

Well, not really. If I were indestructible, I'd try to find some way to use my new power for the common good; more than likely, I'd become a lab rat of some kind. It wouldn't be right for one person to have such a gift...think of what people could do if we were all indestructible and immortal.

Of course, such a world would have its own set of serious social problems...perhaps we're better off fragile, after all.
Posted by Earl J. Woods at 7:54 pm No comments: