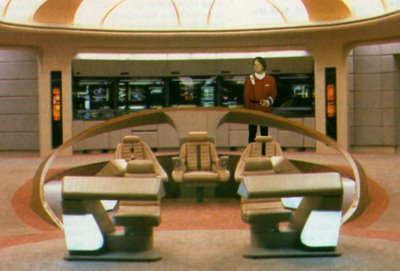 After saying for ten years that I'd enter Pocket Books' annual Strange New Worlds Star Trek short story contest, I've finally done it. I wrote the story over the course of three very intense nights, sent it to New York via Fed Ex yesterday, and according to the tracking system it arrived at the Pocket Books mailroom today, three days before Monday's deadline.

I have no illusions about my chances of being published in Strange New Worlds 10, but it was great to finally finish a piece of fiction and send it into the hands of unbiased outsiders. The contest results are released on or about December 22nd, so wish me luck.
Posted by Earl J. Woods at 7:28 pm 3 comments: 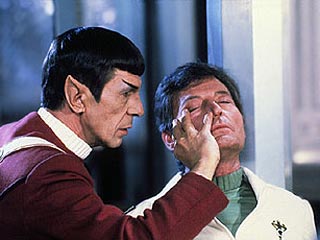 I was thirteen years old when Mr. Spock died, heroically saving the ship in Star Trek II: The Wrath of Khan. It was a powerful experience; for the first time, a character I'd known my entire life had been killed. Suddenly anything was possible.

Until the next movie, of course. Turns out Spock was only mostly dead, and by end of Star Trek III: The Search for Spock, all was right in the world once more. (Well, except for the Enterprise getting blown to smithereens, but that's another kettle of tribbles.)

But consider the course of Spock's death and resurrection. Near the end of Star Trek II, Spock, realizing that he's probably going to die in the act of saving the ship, initiates a mind-meld with his old friend, Dr. Leonard "Bones" McCoy.

We learn in Star Trek III that the mind meld transferred Spock's katra - his soul, or consciousness - into McCoy's brain, so that Spock's essence could be transferred to its rightful home on the planet Vulcan. But as we know from the third film, Spock's corpse was regenerated by the Genesis Wave, and the high priestess of Vulcan was able to reunite Spock's mind and body, and faster than you can say "ye canna change the laws of physics!", the status quo is restored.

For years Star Trek fans have accepted Spock's miraculous return as a given. But a few nights ago I sat straight up in bed and realized that it's quite possible that Spock never really returned at all. Since 1984, the Spock we've seen presented in subsequent films and television shows may have been, in fact, an imposter!

Consider the climax of Star Trek II. Here's the sequence of events:

1) The warp engines have been knocked offline and need to be fixed before the Genesis Device explodes, destroying the Enterprise.

2) Spock realizes that only he has a chance of fixing the warp drive, but that he'll have to sacrifice his life in the process.

3) Realizing this, and wanting something of his essence to live on, he mind-melds with McCoy in the engine room - transferring his consciousness to McCoy.

4) Spock then enters the reactor room, and while bathed in radiation, manages to repair the warp drive.

What's wrong with this picture?

At step 3), Spock transfers his soul into McCoy. How, then, can he carry out a complicated repair and then have a heartfelt, deathbed conversation with Kirk?

We are left with only three options.

A) Spock transferred a copy of his consciousness into McCoy. This copy is what was resurrected on Vulcan - the original Spock died in the reactor! For a few moments, there were two Spocks, one lodged in McCoy's mind, the other carrying out the reactor repair and deathbed heart-to-heart.

B) Somehow, Spock's consciousness embedded some kind of automatic pilot function into the body it left behind, enabling the soulless husk to carry on as if it were a conscious being for a few minutes. A zombie saved the ship, and Admiral Kirk wept over that zombie's death, never realizing that the real Spock was just a couple of metres away, inside Dr. McCoy.

C) The "real" Spock left behind a copy of himself in his original body to carry out the reactor repair.

Which option is correct? It's impossible to determine for certain, but consider this: when Spock transferred his consciousness, his aim was not to come back to life. As we learned from Spock's father, Sarek, in the next film, Vulcans transfer their katras only so that their wisdom and experience can be stored in a kind of library for the use of other Vulcans. We can infer that a copy of a Vulcan's katra would be sufficient for this purpose.

Knowing Spock's character, it is unlikely that he would create a copy of himself for the sole purpose of sacrificing itself; such an act would be akin to giving birth to a twin with a built-in death sentence.

Therefore, we must conclude that the katra in McCoy's head was but a copy of Spock's essence, and that the real Spock did in fact die for the sake of his shipmates. The Spock we saw in Star Trek III, Star Trek IV, Star Trek V, Star Trek VI and two episodes of Star Trek: The Next Generation was a biological robot of sorts - or, at best, Spock's twin.

Does it matter? Well, as Spock once said, "A difference which makes no difference is no difference." Pre- and post-Genesis Spock retained the same essential character, taking into account the passage of time and gathering of new experience, and the new Spock certainly would have passed a Turing test, or any other test of his sapience.

And yet I can't help but feel like I've been living a lie since that warm summer night in 1982...the night Spock died, and never came back.
Posted by Earl J. Woods at 8:32 pm 3 comments:

She Married a Scientist from Inner Edmonton

On July 14, my old friends Jeff and Susan Shyluk arrived in Edmonton to help celebrate the nuptials of our mutual friend and University of Alberta Star Trek Club accomplice, Dr. Michael Snyder, a scientist, to the charming and enigmatic Naomi Littlewood. 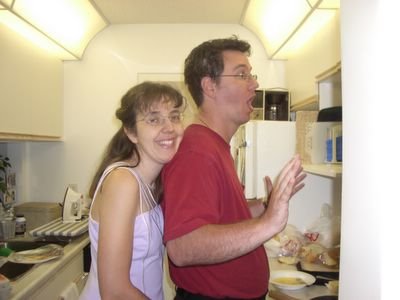 On the fateful morning of the 15th, Jeff and Susan kindly made breakfast for Sylvia and I. Once our morning repast was complete, we dressed up, packed ourselves into Jeff and Susan's rental car, and made our way to Inglewood Park, just a few metres distant from my old apartment complex, Baywood Park.

We headed north on 170th street, stopping for a red light just south of the Mayfield Inn. Crossing the avenue before us was a black van towing an orange two-wheel trailer. The trailer looked a little shaky, and I wondered if it were going to come loose of the van's hitch. No sooner had the thought crossed my mind than it changed from idle speculation to grim reality, and the four of us goggled in slack-jawed wonder as the trailer came free of its moorings, bouncing along behind the van, sparks and chips of asphalt flying.

I wondered if the driver of the van was going to stop. Sure enough, he did, and the careening trailer bounced off a curb and smashed into the van's rear with a deafening screech of metal on metal. A bald, husky, puzzled man emerged from the van, bewilderment filling his eyes as he surveyed the damage to his vehicle.

As a devoted lover of slapstick comedy, I couldn't help but laugh. I suppose it would be more accurate to say that I was cackling, despite the sympathy I genuinely held for the man's predicament. Jeff didn't help matters by saying "Where's the trailer?" over and over again in a "puzzled hick" voice. 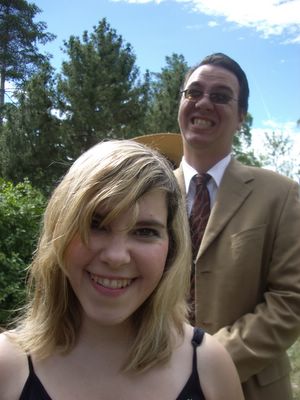 That bizarre interlude concluded, we finished the journey to Inglewood park. The wedding ceremony was short and sweet, and featured a lovely quote from the cult film The Princess Bride, a touch I appreciated. 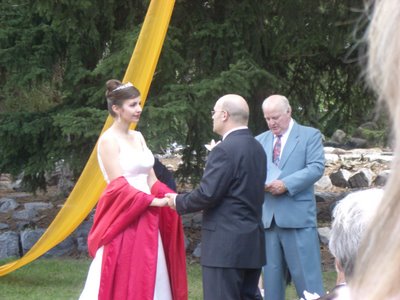 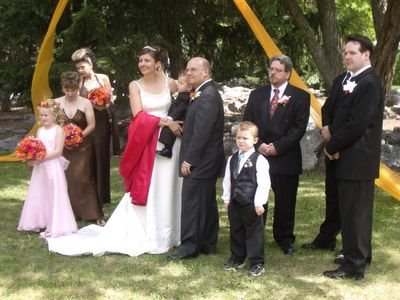 Naomi and Michael with their son Elliot

Here's the newly-sealed couple with their strapping young son, flanked by several members of the bridal party. 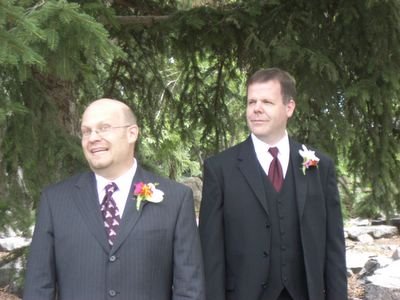 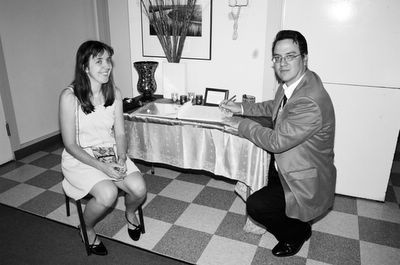 Jeff and Susan at the reception 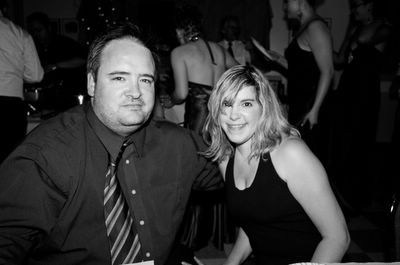 Sylvia and I at the reception

As is usual at these human affairs you Earth people call "weddings," a reception followed the ceremony. Here many carbon units feasted upon the flesh of other carbon units. The flesh was good, far better than you find at most weddings. 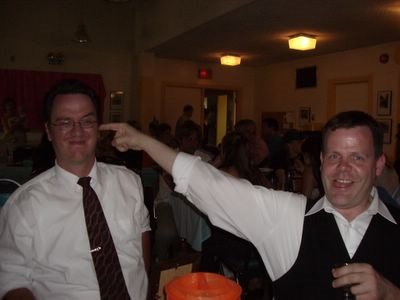 Some of the flesh-sampling rituals puzzled me. But they were entertaining. Foolish Earthlings! 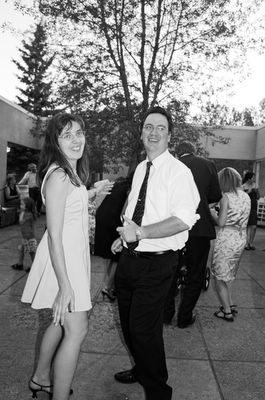 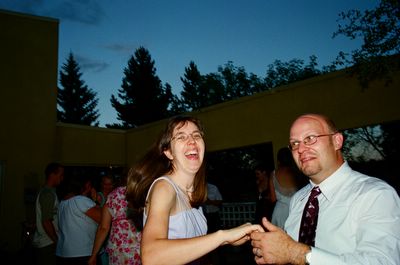 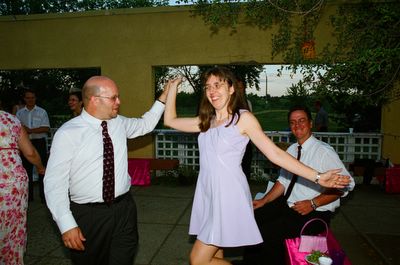 Susan and Michael dance as Jeff looks on 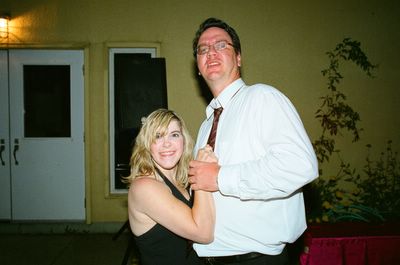 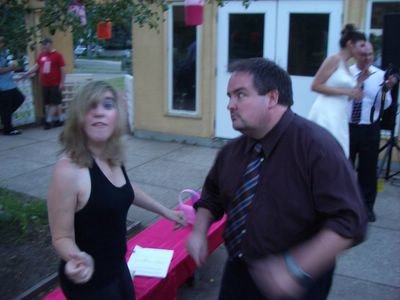 I was unable to avoid participating. 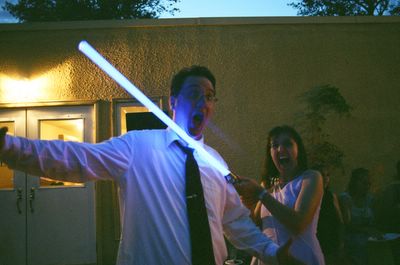 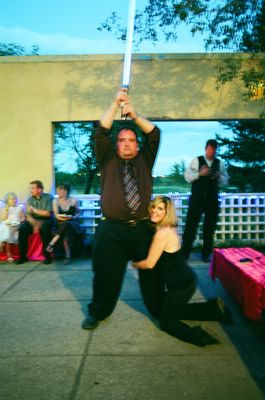 Foolish Earth beings! Your Jedi weapons are no match for the peerless might of me! 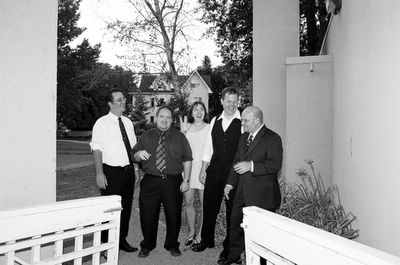 Gathered here, some of the membership and executive of the University of Alberta Star Trek Club, circa 1987-1991. 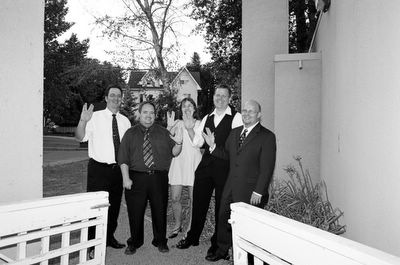 We hope that Michael and Naomi's marriage is long and prosperous. 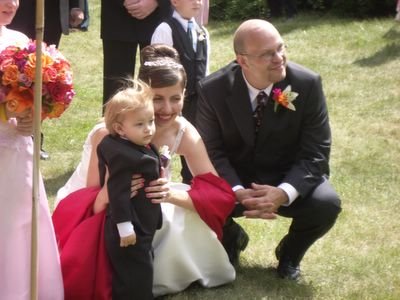 It's Quite Unusual (For Tom Jones to Play the Dump) 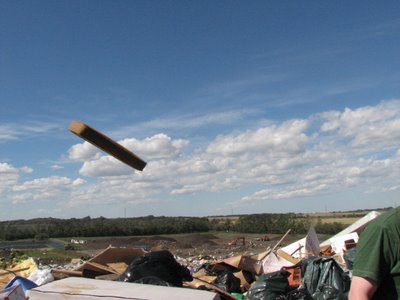 It's quite unusual for Tom Jones to play the dump
It's quite unusual but he has to prime the pump
So when Dad, Sean and I took some bulky garbage out
We were indeed quite shocked to see him sing and shout
Oh, there was no doubt 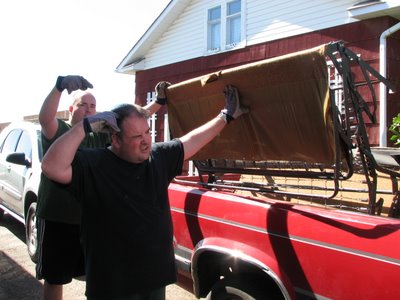 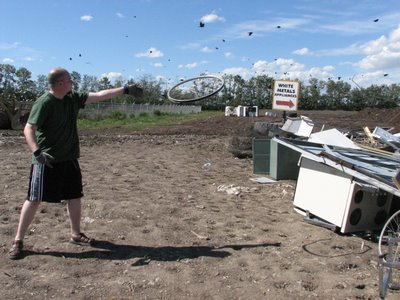 It's not unusual to fill up our land with trash
Nor so unusual for Tom Jones to earn some cash
But if you ever saw the two in harmony, you might just think you'd gone crazy
Maybe it happens all the time, oh whoa ohhhhh
Trash will never go where you want it to
Why won't this crazy junk decline? 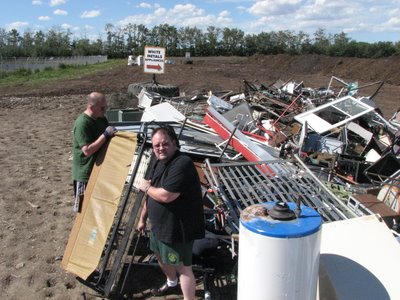 Today one of my bosses, Alberta Liberal MLA and Finance Critic Rick Miller, did something amazing. 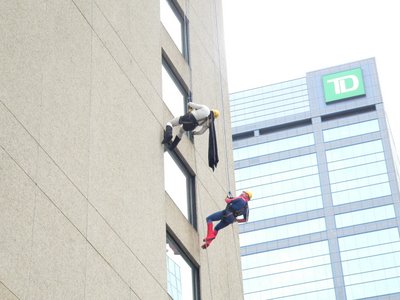 To raise money for the Easter Seals, he rappelled down the side of the Sutton Place Hotel. That's him in the Batman costume on the left. 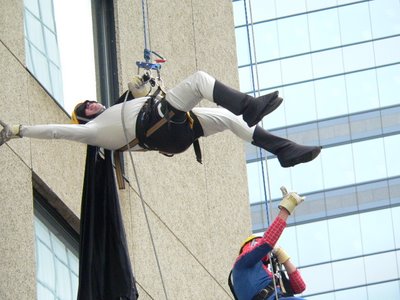 Risking life, limb and dignity, Rick raised over $2300 for the charity, which helps disabled youth reach their full potential. 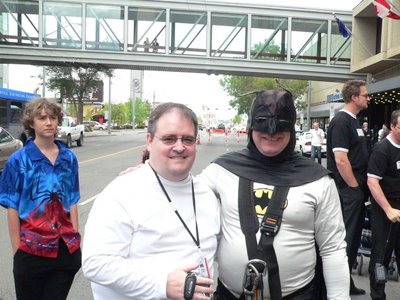 Once Rick's precarious plummet was complete, he graciously posed for a photo with me. What I didn't realize was that Rick had an evil plan. "Come up to my office after and we'll take some more photos," he said. 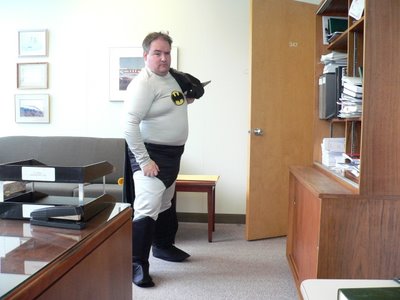 Apparently Rick thought that since I was such a huge comic book fan, I'd want to try on the costume. Naturally I protested, but in the end, I relented. Could I really pass up a chance to dress up like Batman - and at work, at that? I think not. Sadly, I'm Christian Bale Batman trapped inside Adam West Batman's body.

All goofing around aside, I think it's pretty impressive for a politician to go out on a limb like this and raise money...while wearing a Batman suit, no less. So congratulations to Rick for being a truly dedicated (or should I say committed?) public servant.
Posted by Earl J. Woods at 7:42 pm 6 comments: 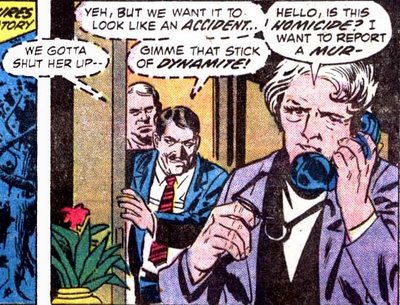 Does a stick of dynamite tossed haphazardly at your murder victim really constitute "making it look like an accident?" Maybe she accidentally dropped her household dynamite.
Posted by Earl J. Woods at 12:35 pm 3 comments: