Mystery of the Missing Magnet 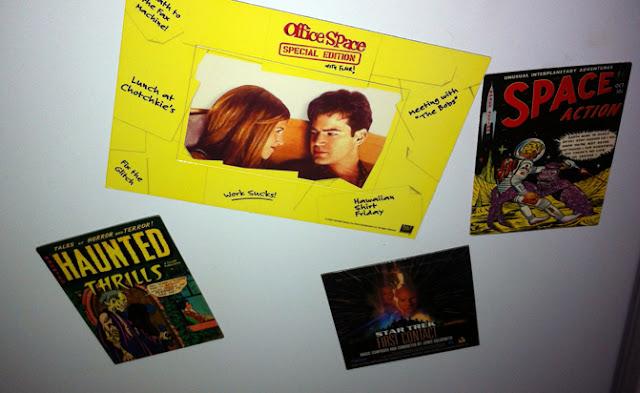 I was nearly finished Tarzan and the Golden Lion this morning when I noticed something caught between the pages of the decades-old book. My eyebrows leaped for my hairline as I recognized my Star Trek: First Contract soundtrack fridge magnet, long thought lost. I slapped it onto my office refrigerator as soon as I returned home.

Star Trek: First Contact hit theatres in late 1996. My friend Leslie accompanied me to the film. She probably didn't enjoy it as much as I did, but I do recall she found it interesting that Star Trek's utopian vision required a nuclear holocaust as part of its backstory. (I find it pretty interesting too.) In the instant before Zefram Cochrane's Phoenix lifts off from Montana, I knew with absolute certainty that he was going to play Steppenwolf's "Magic Carpet Ride," and sure enough that's exactly what happened.

So impressed was I with this choice of music that I bought the soundtrack shortly afterward. When I opened up the CD package, I discovered the First Contact fridge magnet.

"That's odd," I thought. "Why would a CD include a fridge magnet?"

Not knowing what else to do with the odd bonus, I took the CD to work - coincidentally, the Western Board of Music, where I'd worked with Leslie only a year or so before - and stuck the magnet to a filing cabinet, where it stayed for the year or two.

Months later, I moved on to a new job at Hole's. And months after that, I realized that the fridge magnet had gone missing. Why I even noticed its absence I cannot say, but for years afterward, every few months, a small corner of my brain would ask "Whatever happened to that fridge magnet?" "I must have left it at Western Board," another part of my brain would reply.

Until today. My edition of Tarzan and the Golden Lion was printed in 1997. I must have read the book and used the fridge magnet as a bookmark. Or perhaps that's the book I was reading when I left Western Board and I tucked the magnet into the book for easy carriage.

This is probably the most inconsequential post I've ever offered here at The Earliad, and that's saying something. I wouldn't have written a thing about this event if the magnet's unknown status hadn't plagued me, in the mildest way, for years.

I didn't particularly care about the magnet; it's not some valuable collectible. I've lost plenty of things with far greater value, and I'm not particularly thrilled to have found this one.

And yet when I saw that magnet peeking out between the covers of my book, it felt like an accusation of some kind, like I'd deliberately abandoned the worthless geegaw. I could have thrown it away, but instead there it hangs, on my fridge, the baleful eyes of Picard, Data and the Borg Queen mutely watching me type this.