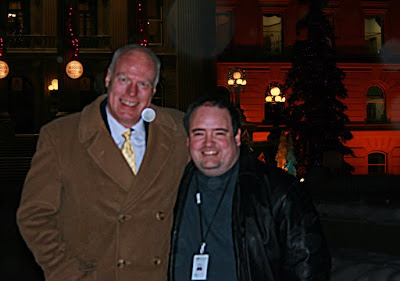 Earlier this month, former Alberta Liberal Leader Kevin Taft announced that he will not run for reelection. I was saddened but unsurprised by this news. Kevin has poured heart and soul into provincial politics for a decade; he's more than done his bit for democracy.
It seems a little odd to say that one could ever be a fan of a politician, so reviled is the breed. But I was and am a fan of Kevin Taft. I was a fan even before I started working for the Official Opposition.
I've never told anyone this, but I first became aware of Kevin because my friend Leslie edited Kevin's first book, Shredding the Public Interest. Because of my interest in Leslie's work, I read the book, and I was impressed by Kevin's clearheaded, nonpartisan analysis of the Klein government's unneccessary cuts to public services. A few months later, I happened across Kevin in person; he was giving an interview to a television crew at West Edmonton Mall. I almost worked up the nerve to introduce myself, but at the time I figured that Kevin was probably a busy man and didn't want to be bothered. I should have realized that politicians by their very nature actively pursue meeting new people! But the moment passed, and I went back to my job at Hole's, working on gardening books and writing speeches for Lois, who was either University of Alberta Chancellor or Lieutenant Governor of Alberta at the time - I don't remember the exact year I bumped into Kevin at WEM.
I've always defined myself as progressive, meaning that I believe in the importance of public services, I'm a strong believer in free speech and human rights, I don't mind paying reasonable taxes, and I think that instititions that serve the common good are vital: libraries, schools, public transit, public health care, museums, universities and so on. Kevin's writing and his statements in the Legislature and in the media earned my respect. At the same moment, I was writing speeches for one of the most impressive and progressive politicians in Alberta - Lois Hole. Of course her position was supposed to be apolitical, but she always encouraged me to push the limits of what was deemed acceptable speech from a Lieutenant Governor, and so I had the freedom to write about passions we shared: public libraries, public education, public health care and all the rest.
Even so, there was only so much Lois could or should say in a viceregal position. I began to feel that one day, sooner or later, I would have to take a more active role in provincial politics.
After Lois died in early 2005, I found myself somewhat adrift. I did work for her successor, Normie Kwong, for a few months, and I kept writing gardening material with Lois' son Jim, and I enjoyed both jobs. But it wasn't the same. So in late 2005, I applied for a job with the Official Opposition, starting in January 2006 as a writer, or more officially, a "Communications Coordinator." I first met Kevin officially at a Christmas-week meeting a few days before my official start date, and in retrospect I'm a little embarrassed by my behaviour; I think I sputtered a couple of fanboyish lines like "I'm a big fan!" and "I'm so honoured to be working with you!" Not exactly the cool, collected image I was hoping to present.
Working for any opposition party in Alberta is a tough gig, but Kevin's conviction and his desire to do the right thing for the people of Alberta always motivated me to do my best. As I got to know Kevin and his wife Jeanette, my conviction that he (and they) were in politics for the best of reasons grew firmer. I've never had a shred of doubt that Kevin wanted to be Premier for anything but the most altruistic reasons; Kevin saw the flaws in Tory governance, and wanted to fix things. You can't ask for more than that from a politician. He even married Sylvia and I in 2007, and he did a wonderful job.
Kevin will continue to serve as the MLA for Edmonton-Riverview until the next election is called. If my services are still needed, I'll be staying on to help Kevin's successor, Dr. David Swann - another good man of excellent character, full of compassion - fight the election. But I'm going to miss Kevin, and whatever he and his family choose to do afterward, I wish them all the best.
Posted by Earl J. Woods at 8:46 pm 2 comments:

One Last Look at Lost: The New Man in Charge

Back in May, I wrote about my disappointment with the finale of Lost. My greatest complaint was the episode's failure to address some of the most intruiging mysteries surrounding the island and the Dharma Initiative. The show provided an emotional resolution, but I was looking for intellectual satisfaction too. In other words, I wanted some answers to the questions the show so gleefully raised over the course of six years.

Last night, Sylvia and I watched "The New Man in Charge," the twelve-minute epilogue included as a bonus feature on the Lost Blu-Ray set. Without giving too much away, the mini-sode chronicles a short vignette providing a glimpse into Hurley's new role as island overseer, with Benjamin Linus as his right-hand man.

As might be expected, the short didn't answer every unresolved question, but it did tackle a few minor mysteries; and more importantly, it gave one neglected character some resolution and the possibility of new adventures.

Deliberately, I think, the answers provided by the short were fairly predictable, the sort of thing viewers could have - and perhaps should have - come up with on our own. The episode almost reads like fan fiction, with its love of minutiae. In fact, the answers given are so logical and straightforward one should assume that the showrunners are taking a bit of a poke at the audience - admittedly with some justification. It's as if they're asking "Really - you needed us to answer that question for you?"

And yet there's clearly a method to their madness, because I find myself with somewhat warmer feelings toward a show that disappointed me in the end. "The New Man in Charge" by no means completely redeems the series' climax, but it does mitigate some of its sins, if only by reminding the audience that our own imagination is a perfectly valid a tool for interpreting and continuing stories crafted by others.

In effect, the producers are saying that the answers are out there - now go find them. Or create them. Perhaps, in the final analysis, that's the best way to end this show...by encouraging viewers to "get lost" in the best possible sense, by finding their own answers - answers quite possibly more satisfying and creative than any Lost's producers could have given. This epilogue encourages viewers to add to the show's mythology on their own.

I think that's a pretty good message from a medium that usually encourages passive absorption of culture, rather than active engagement. And now I've found a way to make peace with Lost after all.
Posted by Earl J. Woods at 12:14 pm 2 comments:

The Financial Foibles of the Fantastic Four 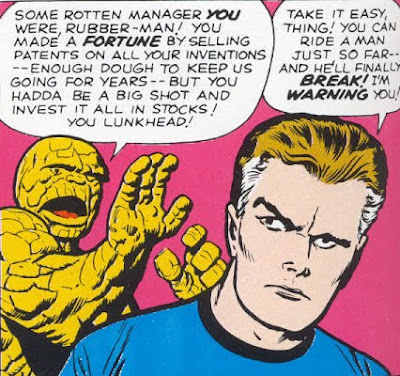 Given the current recession and the state of most RRSPs these days, I can't help but take comfort from Mr. Fantastic's umbrage. Even a genius like Reed Richards can take a hit from the market, just like the rest of us.
Stan Lee and Jack Kirby, creators of the Fantastic Four, revolutionized comic superheroes by bringing their typically larger-than-life antics down to earth from time to time. On one page, the FF or Spider-Man might be fighting a galactic threat; on the next, worrying about their dysfunctional lives. I wonder how much Reed might have fetched for the Pogo Plane, the Fantasticar or the Ultimate Nullifier if he'd had access to ebay...
Posted by Earl J. Woods at 5:40 pm 5 comments:

Earl's First Attempt at Cooking with the New Oven 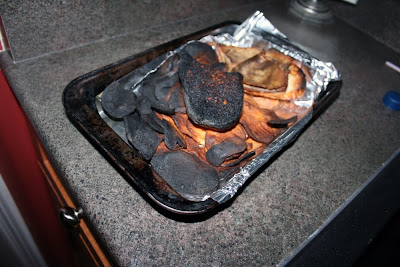 Email ThisBlogThis!Share to TwitterShare to FacebookShare to Pinterest
Labels: Cooking

The huge walk-in shower is one of the most appealling features of our new home, but I discovered today that safety in the bathroom remains a subject of vital importantce. While luxuriating in the spray and steam, I decided that since there was enough room to lie down in the shower, I might as well give it a try. Unfortunately my feet flew out from under me as I shifted position and I cracked my skull on the unforgiving porcelain tiles of the wall. One of my flailing arms swept every single beauty and hygiene product off the shelf and across the shower floor. The tremendous "clonk" of my impact shook the foundations of our new home, and Sylvia cried out in alarm.

"I'm okay," I shouted, even though I could still see animated bluebirds circling my head, merrily chirping away.

A few moments later, Sylvia offered her sympathies. "Poor baby," she said, "Did you land really hard on your bum?"

"Fortunately, I landed on my head," I quipped. Fortunate indeed - a thick skull has saved many a showering fool over the years. Next time, I'll stay on the rubber safety mat.
Posted by Earl J. Woods at 6:55 pm 7 comments:

It's 10:59:30 am as you pull into the drive-thru lane at McDonald's. You're relieved that you've made it just before the breakfast menu cutoff, but your passenger has a hankering for a Big Mac and fries. If you use the remaining 30 seconds before 11:00 am to order breakfast items, then switch to your friend's lunch order at 11:00 am precisely, will McDonald's provide both breakfast and lunch?

I should try this sometime, with a very accurate timepiece.
Posted by Earl J. Woods at 12:01 pm 4 comments: 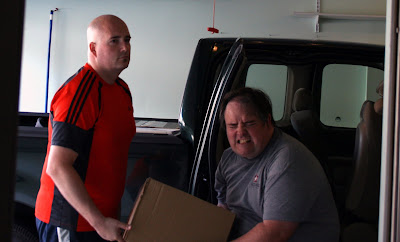 Mom and Dad were kind enough to lend Sylvia and me their truck for our move, and Sean loaned us his brawn. As a result, we're mostly moved in, with much gratitude to my family! 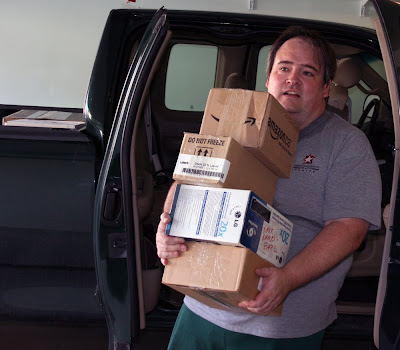 Just a few dozen more boxes of books to go... 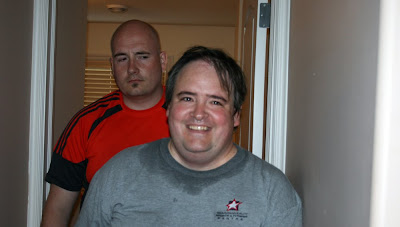 "I thought you said you'd see me in hell before you moved these boxes."
"Well, now I've seen hell. Contrary to popular belief, hell is not other people, and it's not the absence of god. It's boxes of books piled to the ceiling. Get an ebook reader for the love of all that's holy." 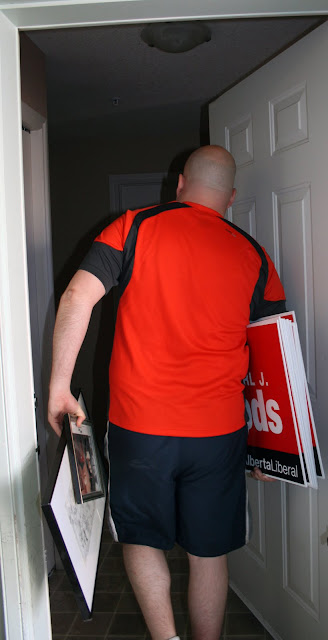 Now that we have a bigger place, Mom and Dad don't have to store my leftover campaign signs from the 2008 provincial election. Or my old Star Wars action figure...or my grade school report cards...
Posted by Earl J. Woods at 5:37 pm 1 comment: