The Haunted Elevator of Henday Hall 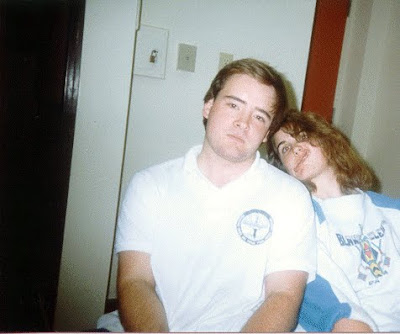 At left: a typical Lister Hall elevator and an unsuspecting pizza delivery boy (and friend).
Watching Inception last week reminded me of some of the dreamlike incidents in my own past - surreal events that have a natural explanation (as all events do, however odd), but an explanation hidden from my understanding.

For a few months during my last year at the University of Alberta, I took a one-night-a-week job as a pizza deliveryman at Lister Hall, the university residence. The pay was miniscule - perhaps five or six dollars an hour - but enough, at the time, to pay for Coke and comic books.


Every shift, I reported to The Marina, the in-house grill located in Lister Hall proper. Completed pizzas were placed on a cart, which I pushed from the main building down the underground hallways to Lister's residence towers - Henday, Mackenzie, and Kelsey - and our waiting customers.

Late one shift, I was pushing my cart toward the Henday tower's elevator. Just as I approached, the elevator doors slid open, even before I pressed the call button. I was a little nonplussed, but shoved the cart inside and turned to push the button for the eighth floor. Before I could do so, the elevator lurched upward, throwing me a little off-balance. Steadying myself on the cart, I impulsively decided not to press 8, instead letting the elevator take me where it might. My eyebrows lifted in surprise as the doors opened up to the eighth floor.

With a mental shrug, I left the lift, delivered the pizza, and returned to the elevator - only to watch as its doors opened again without prompting. I didn't hesitate; I had no thoughts of malevolent elevator demons delivering me to the depths of the earth. I just smiled, pushed the cart into the car, and remained passive as the lift plummeted gently to the basement. The doors opened once more, inviting me to leave, and slid closed behind me as I continued my rounds.

At the time I spent a good deal of thought trying to figure out why the elevator seemed so eager to please. No buttons were pressed; none were lit inside the lift; I saw no furtive pranksters setting me up for a gag. A mechanical malfunction seems unlikely, and yet it's the only rational cause I can come up with.

While I'm not a believer in the supernatural, sometimes it pleases me to imagine that there were unseen, unearthly forces at work that night, invisible jesters having fun with some mortal fool. My strange elevator ride added intrigue and mystery to an otherwise dull evening - and, it seems, to my memories of a mostly ordinary life. Whatever happened, however mundane the true cause, I remain grateful for my odd excursion to the outer limits of the twilight zone.

Email ThisBlogThis!Share to TwitterShare to FacebookShare to Pinterest
Labels: Lister Hall, The Earliad, University of Alberta

We have hundreds of ghost stories in the History and Archives room at Lister Hall. I used to work night shift security before I was LHSA President and the wierdest stuff used to happen there...

Always great to hear from an alumnus - thanks for dropping by, Michael!

Weird, The Marina didn't look familiar, despite the fact I lived in Lister for 3 years.

So I can't fill in the blank, what comes after "It's the holidays"?

I'm afraid it's been too long for me to remember what Yaz might have been getting at with his "fill in the blank" comment. The gulf of years is too wide...