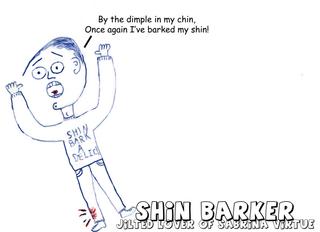 Jack Shemp, AKA "Shin Barker," is one of the more recent recruits of the Minions of CHAOS. Interred into the ranks by new Head Minion Dr. Cerebellum, Evil Brain in a Jar, Shin Barker has proved his usefulness on several CHAOS missions, including the destruction of a Paladin aircraft (pilot Whiskey Ripper barked his shin on the controls, sending the plane careening into the indestructible form of Paramount Importance).

Shin Barker was seen as a neutral force in the CHAOS/ORDER conflict until Paladin agent Sabrina Virtue turned down his marriage proposal. Enraged, Shin Barker was heard to yell, "I'll show you! I'll show you all!" before storming off in a huff, spoiling the effect by barking his shin on a park bench. Nevertheless, Shin Barker contacted Dr. Cerebellum just a few days later, and now his turn to CHAOS seems irreversible.

If you encounter Shin Barker, contact an agent of ORDER immediately. Do not attempt to apprehend him yourself - you could suffer a badly barked shin, or worse.
Posted by Earl J. Woods at 9:02 pm 2 comments: 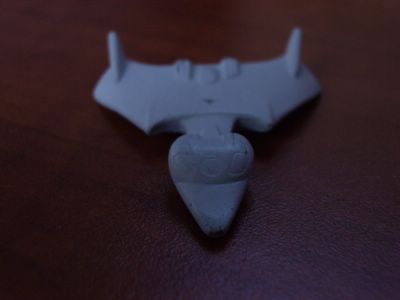 
Frank Henriquez, the very kind fellow who runs the Lief Erickson tribute page I mentioned a few days back, has very kindly shipped me an assembled resin replica of the scout vessel that came with the UFO Mystery Ship. It's all primed and ready for painting - all I need to do is pick up some glow-in-the-dark paint, and it'll be just like I'm 8 years old again. What a treat, to get something like this in the mail! It's a beautiful gesture, and I'm very touched. Thanks a bunch, Frank!
Posted by Earl J. Woods at 10:00 pm 4 comments:

I've added a few new links to my sidebar, and you should check them out. Liam Johnstone's relatively new blog, In the Now, is very entertaining and insightful, my friend Allan Sampson's Myspace page features some really stunning photography of Disneyland at the moment, the Perry Bible Fellowship really is the world's greatest comic strip (and so is Spamusement), and you should visit Susan Shyluk's new blog for photos of her hamster and a look at life on the coast. Follow the links to the right for hours of fun and joy!
Posted by Earl J. Woods at 11:28 am 4 comments:

Too Good to be the Worst

Well, the results of the Tyee's Teen Angst Poetry contest are in - and the verdict is...

"We really enjoyed the poem and the backstory. But I'm afraid your poem was too good to be the worst."

Well, there you have it - my shot at poetic fame, gone down in fiery flames. Or should that read...

My shot
At poetic fame
Gone down in flames

However, just because the good people of British Columbia won't get to read my poetry doesn't mean that I can deprive my faithful cadre of demented devotees. Here's my entry:

“And My Eyes See the Darkness” was written sometime during the first semester of the 1984-85 school year, which for me was the first half of grade ten; I would have been 14. I was attending Leduc Composite High School in Alberta, and like many a so-called gifted child, I felt alone all the time and wrote vile poetry about my loneliness. This particular poem was written in the wake of an editorial I’d written for the school newspaper; I lambasted “leather jacket-wearing hooligans” for disrupting a school dance. At the time, I was awash in self-righteousness, but it didn’t take long for a certain young lady I had my eye on to teach me a pointed lesson about tolerance; who was I to insult an entire clique because of the actions of one or two bad apples?

Of course, even after realizing in my heart that I was wrong, I was still stubborn enough to refuse to write a retraction. So I was pretty unpopular for a few weeks. Didn’t get the girl, either; after setting me straight, she was content to ignore me for the rest of our time in high school.


And my Eyes See the Darkness

What does a young man do
When exiled by friends, enemies
And neutrals alike?
When I try to explain or even
Offer a greeting,
I find
I am talking to statues,
Cold and merciless.
They can talk amongst themselves,
But I am an alien; an outcast
They pretend they do not know my language.
I am cast out of every public and
Private Place;
Forced, finally, to a remote set of stairs
Where no one will
See Me
Hear Me
Or
Talk to me.

And my eyes see the darkness.

What Happened at Pete's Place 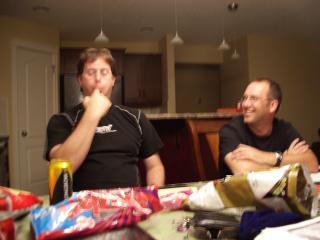 Mike sticks his finger in his mouth as Pete looks on in horror.

On Saturday, I went over to Pete's place to help our friend Colin playtest his new Traveller module. Mike and Jeff were there, too.

Any roleplayer will tell you that a typical session consists of 90% idle chat, and 10% gaming - if you're lucky. So it was this Saturday eve. 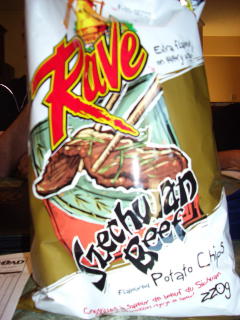 Would you eat this?

First, we taste-tested a mind-bending new potato chip: Old Dutch's "Szechuan Beef" flavour. Not since the halcyon days of Hostess' "French Fries with Gravy" and "Cheeseburger (fully loaded)" have I seen a more ominous-looking bag of chips, so naturally I had to give them a try. 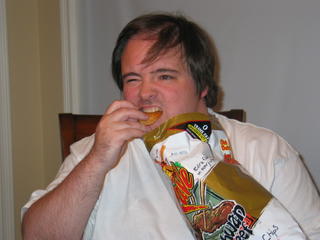 While my friends gave the chips a passing grade, I found them as revolting as I'd anticipated, even though I went in with an open mind. But as far as I'm concerned, Szechuan Beef chips taste like someone left some plain chips in the deep fryer overnight - granted, a deep fryer that had been used to make Szechuan beef, but still... 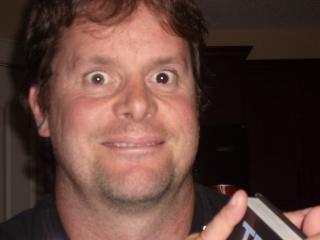 
Midway through the evening, Jeff asked Mike, "Have your eyes always been different colours?" Mike said yes, and I was a little taken aback. I asked for a closer look (not that close, you perverts) and lo and behold, Mike, like Jane Seymour (mmmm...Jane Seymour) does indeed posess one brown eye, and one green. At least, that's how they look to me. Funny the things you can miss even after you've known someone for a few years, but then, I don't make a habit of staring deeply into Mike's eyes, whatever Sylvia may claim. 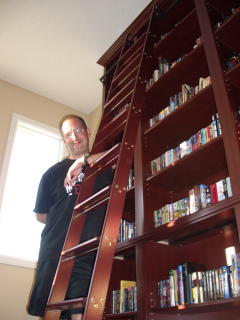 Finally, Pete's bookshelves have at last been completed, and green with envy, I took a couple of photos of his magnificent library. These are gorgeous shelves, extending floor to ceiling, with beautiful brass grommets and even a ladder. I could spend hours in there, but I'm sure Pete and his girlfriend would eventually grow tired of me, so for now I'll just have to dream of a day when I might possess such peerless shelving. Here's another photo, taken with my little Pentax's panoramic feature. 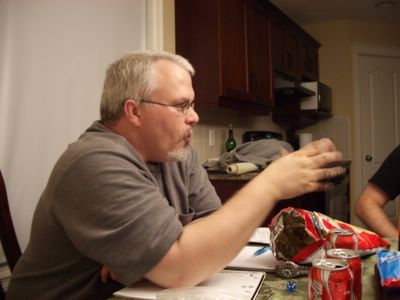 Colin attempts to get the session back on track. Ha ha, good luck.

As for the game, we managed to land on a planet made of poisonous fungus, and Jeff ran over a guy with a hoverjeep, shattering both shins. Not Jeff's shins, the other guy's shins. (Though if you know Jeff, you know that the odds that he's shattered his shins at one point in his life or another are actually pretty high.) He also shot a couple of people. And I bought a weapon called a "puke stick." 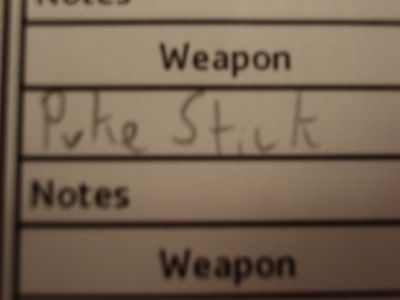 This...is my Puke Stick. (Say it in a Bruce Campbell voice.)

You poke, they puke.

You know, come to think of it, these games we play sure contain a lot of senseless violence. I'm not sure if our actions were useful for Colin's playtest, but he knew what he was getting into when he recruited us, I guess.
Posted by Earl J. Woods at 4:31 pm 5 comments:

Yesterday, July 10th, was Mom's birthday. So Sean and Sylvia and I went to Leduc to celebrate. Presented in pictures, here is the tale of that fateful day. 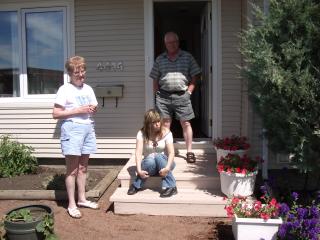 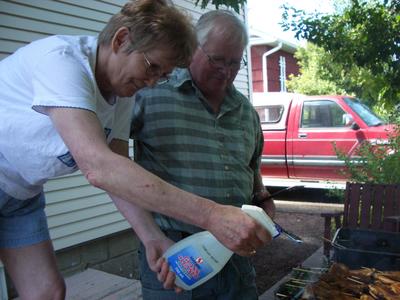 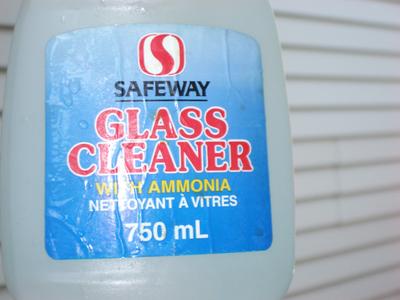 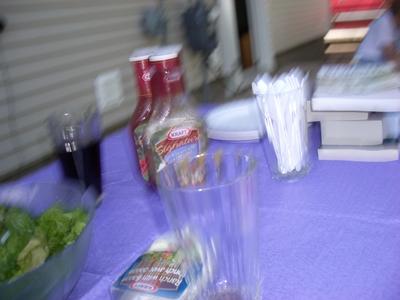 Suddenly, the world grew hazy for the three hapless youths. 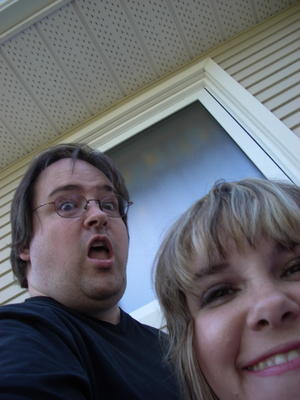 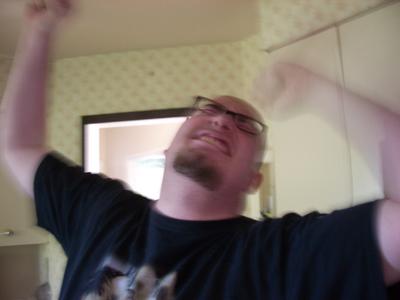 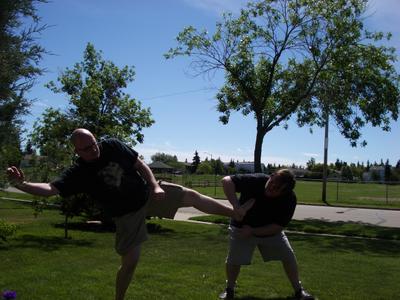 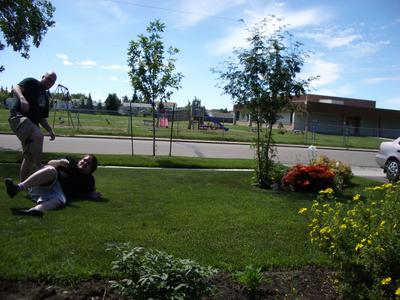 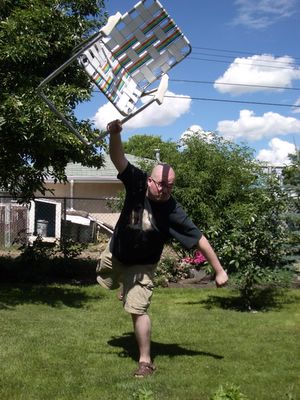 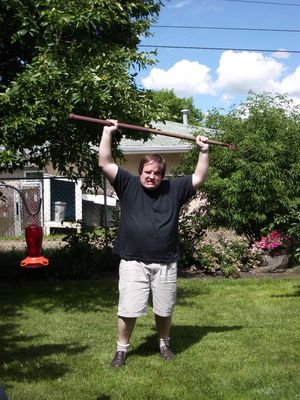 Brother lashed out against brother.... 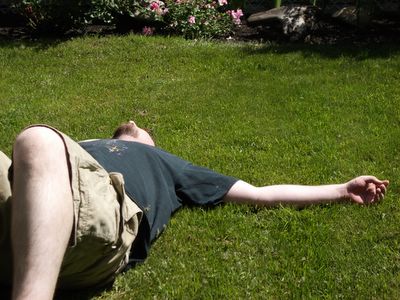 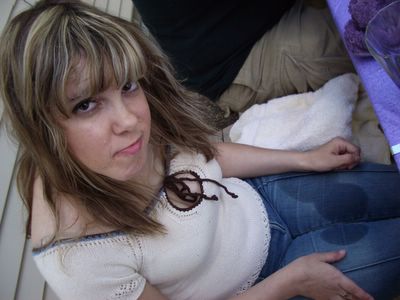 Blood was spilled - into hapless laps! 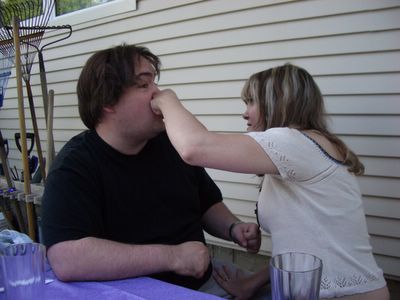 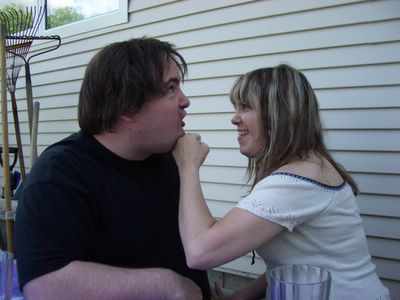 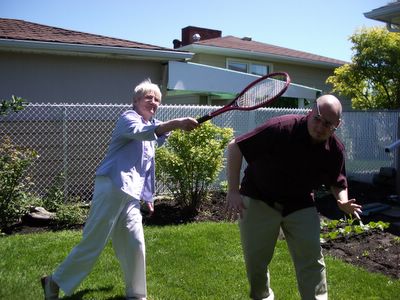 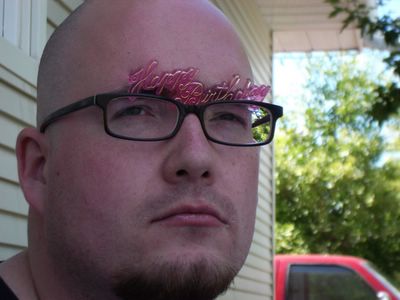 And in the end, some were driven mad by the draconian plot! 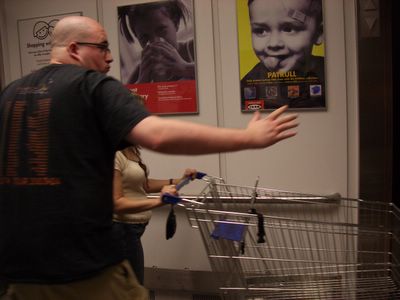 Recovering their senses, the intrepid trio fled to Ikea. 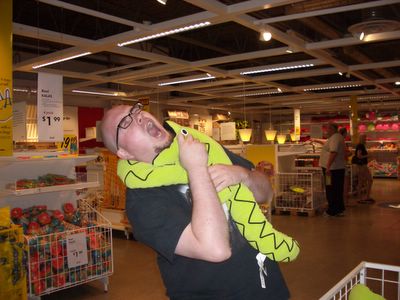 Only to be attacked by the merchandise! 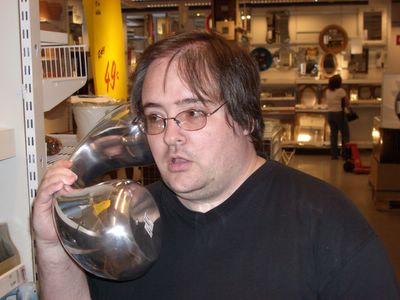 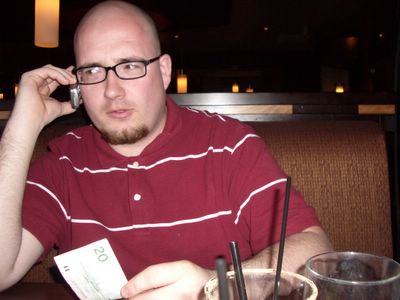 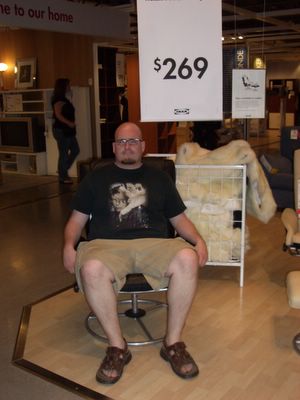 If click on this post's title, you'll be taken to a webpage devoted to the AMT/Ertl Leif Ericson Galactic Cruiser model, later reissued in a glow-in-the-dark version known as the UFO Mystery Ship.

I had the UFO Mystery Ship. I received it as a Christmas present in the early to mid 70s, and I remember how thrilled I was; the spaceship had beautiful, futuristic lines, and it even had a hangar bay within which was a small mini-model of a bug-eyed scout ship. In fact, I interpreted this smaller vessel as the "UFO Mystery Ship." I imagined that the larger craft had come across the smaller, found it deserted, and hauled it into the hangar bay for examination. I used to concoct all sorts of weird reasons that the Mystery Ship's crew had vanished: they'd been eaten by a monster, they got locked out of the spaceship while on a spacewalk, they ran out of food, starved to death and decomposed, they were kidnapped by some more powerful alien, or most tantalizingly, they were still aboard the ship, only undetectable to the human astronauts. Sometimes the little scout ship would spring to life, shoot its way out of the hangar bay, and zip around the human ship, firing potshots at it. Usually, the aliens won, because they had the "UFO Mystery Ship." The name was so badass, so scary, that they just had to be more cooly competent and merciless than the humans.

It was a terrific model, and so a few days ago I did a blind web search hoping to learn a little more about it. I found out that the original Leif Erickson model was designed by none other than Matt Jeffries, the man who designed the USS Enterprise for Star Trek, and that the model came close to appearing in the animated followup to that show. Not only that, Larry Niven and Jerry Pournelle loved the original Leif Ericson model so much that they used it as the basis for the INSS McArthur from their novel The Mote in God's Eye. Looks like I wasn't the only one whose imagination was fired by that little box of plastic parts!
Posted by Earl J. Woods at 11:23 pm No comments: