I Has Made Many Arts

Jeff Shyluk's art blog has inspired me to look through my archives to uncover some of my own "art." Those scare quotes are well chosen, as you'll see. 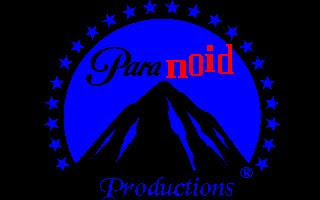 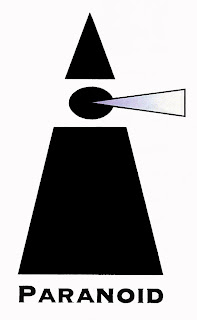 Back when I was making short films for fun, I designed these logos for my imaginary production company, Paranoid Productions. The first one is an incredibly lazy knockoff of the Paramount logo, probably actionable. I think my font choice was inspired, though. I like the second one much more, but it's important to note that it's based on a design by the aforementioned Jeff Shyluk:

As you can see, all I did was take Jeff's way cool, surreal design and make it two-dimensional. That was my intent, anyway. I hope Jeff doesn't mind my reproduction of his art here! 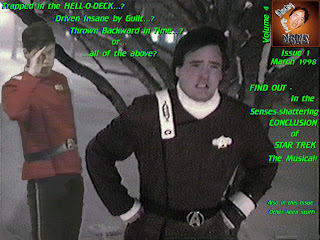 Back when I was sending out my satirical newsletter, Blazing Earl News, to my friends, I often abused Photoshop, as seen here. Jeff himself guest-stars! 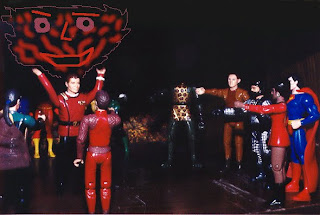 This masterpiece is from another issue of Blazing Earl News. That's supposed to be Redjac departing Admiral Kirk's body. 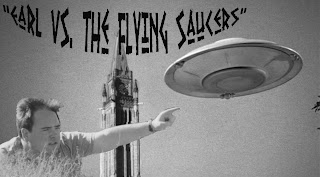 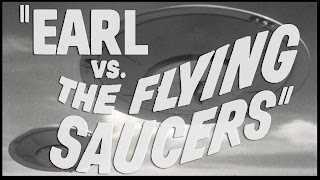 These Photoshop creations are of more recent vintage - I think I created them five or six years ago. I know I can never make this movie myself, but I thought the title was amusing enough to hint at a possible imaginary film.
Back in grade school, I really enjoyed art class, but my efforts, as you might guess, were always somewhat disappointing. But even in the absence of talent, I still have fun dabbling in pursuits outside my normal comfort zone.
Posted by Earl J. Woods at 7:23 pm 1 comment:

I used to be a big fan of 24. The first season's real-time format was innovative and riveting, and the second raised the stakes with a terrifying nuclear threat.

But the underlying premise of the show can really only support one or two seasons. In the context of fiction, it's perfectly believeable that counterterrorist agent Jack Bauer could have one really long day, twenty-four hours of mayhem and suspense, culminating in great personal sacrifice. A second such day was pushing it, but now we're up Jack Bauer's eighth "very bad day" and the audience's suspension bridge of disbelief collapsed into kindling long ago.

These days, I watch 24 as a comedy rather than a drama. What atrocity will Jack commit next in the name of his country's security? Which CTU agent or analyst is the mole this season? Which recurring character will be killed off? How will the producers create a threat greater than the one Jack faced last season? What personal trauma will Jack have to overcome this time? How snarky can Chloe get? How many times will Jack scream "DO IT NOW...or MILLIONS OF PEOPLE WILL DIE!"?

Sadly, 24 has become predictable, perhaps the greatest danger to any show that hopes to generate suspense. That's why the producers should take a differerent approach next season.

I propose that Jack's next "very bad day" should be the sort of bad day any civil servant might have...

JACK BAUER wakes up to the sound of a bleating alarm clock. He slams his hand down. Split-screen views show supporting characters like CHLOE O'BRIAN and KIM BAUER and RENEE WALKER doing exactly the same thing.

JACK, CHLOE, KIM and RENEE perform their morning toilet; they shower, brush their teeth, etc. in real time. Meanwhile, as the digital clock ticks away, we cut to various stores and institutions, including a tailor shop, a school, a deli, etc., all closed because, well, it's 6 am.

You can see where this is going. Nothing at all dramatic will happen during the day, save for the ordinary crises that beset us all. Jack will need a pair of slacks from the tailor, but they won't be finished, giving Jack the opportunity to bark, "If these slacks aren't hemmed in fifteen minutes, I won't be able to pick up Renee in time for the opera! DO IT NOW!"

Of course the last seven or eight episodes probably won't get very good ratings, since the characters will all be sleeping. But think of the incredibly low production costs..!
Posted by Earl J. Woods at 9:10 pm 1 comment:

Jeff Shyluk has been posting about once a day since he started his entertaining visual blog, and I had to laugh when I came across this:

As I've already said to Jeff, I find it strange that whenever artists depict me in cartoon form, I'm wearing some kind of Star Trek outfit. I have no idea why...
Posted by Earl J. Woods at 9:09 pm 1 comment: 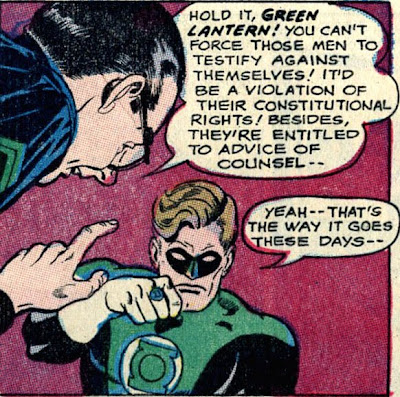 After reading a few of these 1960s Green Lantern stories, I'm beginning to understand Denny O'Neill's 1970s take on the character, when he paired Green Lantern up with Green Arrow, painting the Lantern a stiff law-and-order, tough-on-crime Republican type and Green Arrow as the streetwise bleeding-heart liberal. When I first read those stories as a child, I thought O'Neill was being a little tough on the Lantern, who usually looked cold-hearted and inflexible compared to the more compassionate Green Arrow. But now I see there was some basis in the text for O'Neill's portrayal of the character, and in fact Green Lantern grew a little more liberal over time, his partner's views and their more morally complex adventures rubbing off.

In Green Lantern #49 (December 1966), the titular hero thinks that Henry Peters, a special effects technician for The Dazzler, a popular TV show, may be committing crimes while dressed as that show's supervillainous title character. So he decides to scan Henry's mind (holy invasion of privacy, Batman!) but discovers that Peters' mind is shielded somehow. So Green Lantern decides to chase the Peters, understandably spooking him. If a guy in spandex started chasing me with a glowing green hand, I'd run too. 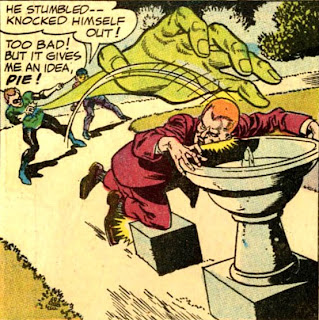 The poor guy barks his shin on a concrete block some idiot left in the middle of the sidewalk and then smacks face-first into a birdbath or water fountain with what appears to be enough force to break his jaw and smash a few teeth.

"Too bad," is Green Lantern's compassionate response. His "idea" is to scan the guy's brain again while he's unconscious, figuring that his mental defences might not work while he's out.

It works, much to the outrage of the American Civil Liberties Association, no doubt. Green Lantern quickly learns that the man has mental powers because he's from another planet, a representative of an advanced and peaceful culture. The interstellar ambassador, it turns out, is quite taken with the aliean Earth concept of drama and decided that he wanted to be in show biz. He got a job in the industry, doing technical work for the sheer love of it. His unconscious mind reveals that he was about to seek out Green Lantern to warn him about The Dazzler's next crime, and to share his identity. 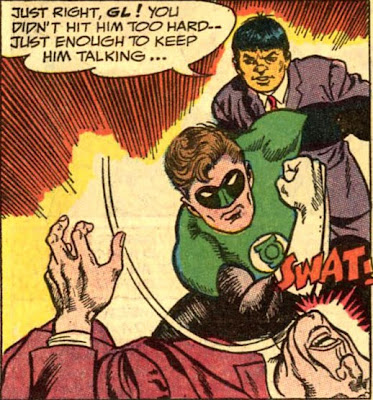 Yes, that's right - he punches the guy in the jaw to keep him unconscious, just so he can keep scanning his brain. Nor does he ever offer an apology, or even think to himself that maybe, just maybe, he crossed an ethical line here.

Computer Powers Down When Playing Games - Any Advice?

About a week ago I encountered a very frustrating computer problem. When I try to play Fallout 3, the computer would shut down after a few minutes. This wasn't just a crash to desktop, freeze, or blue screen of death - the computer powered off suddenly. I thought perhaps I was having a heat problem, so I bought some canned air and blew all the dust out of the casing. That seemed to work for a while, but now I'm encountering the same problem when playing Left 4 Dead 2. The computer is less than a year old, and pretty high end - I shouldn't be having these problems.

All other applications work fine.

Google-fu pointed me to the overheating possibility, but now that the dust is gone and I've verified that the fan is working, I'm not sure what to do. Anyone have any ideas?
Posted by Earl J. Woods at 9:46 pm 10 comments:

I've long been grateful to my old friend Jeff Shyluk for providing the most consistently enjoyable and insightful commentary here on my blog. Now I'm very excited to announce that Jeff is finally leaping into the world of blogging himself, against all expectations, including his own.

Jeff's a great writer and artist, and I look forward to seeing what mad works of genius he unleashes into the blogosphere.

You can find Jeff's blog here: http://shyluk.blogspot.com/
Posted by Earl J. Woods at 7:42 pm No comments: 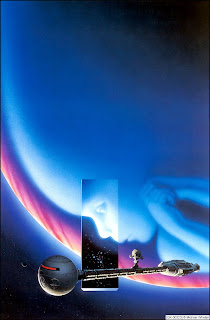 2010 may not have quite the scientifictional ring as 2001 did, but thanks to Arthur C. Clarke it does possess some small degree of mythic power. While we're still a long ways away from sending people to Jupiter, I do have high hopes that new technology will benefit humanity in the teens. In the meantime, I'm still waiting for:

I guess news of water on the moon and the regular discovery of cool new exoplanets will tide me over for a while. Enjoy what's sure to be another scientifictional decade, everyone.