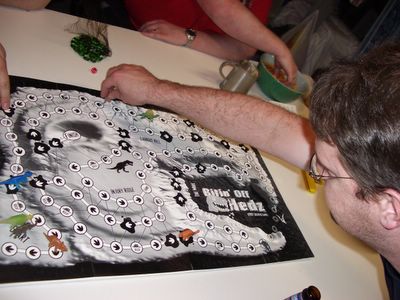 Mike Totman moves his dinosaur around the board

On Friday night, the gang got together to celebrate Stephen Fitzpatrick's birthday and his recent promotion. First, we watched bizarre music videos over pizza (Have you ever seen Christopher Walken dancing on an escalator?), then we played Bitin' Off Hedz (first dinosaur to immolate himself in the volcano wins), then we watched Team America: World Police. ("Cairo? That's in Egpyt!") A good time was had by all.
Posted by Earl J. Woods at 1:17 am 3 comments:

Don't Tread on Me 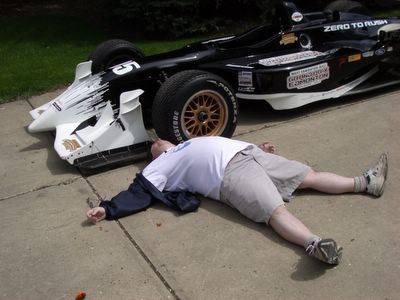 Hole's is sponsoring Grand Prix Edmonton, so on Friday we had the chance to take a few photos of one of the Champ cars for promotions. Of course, I used the opportunity to stage this goofy photo.
Posted by Earl J. Woods at 1:13 am 1 comment: 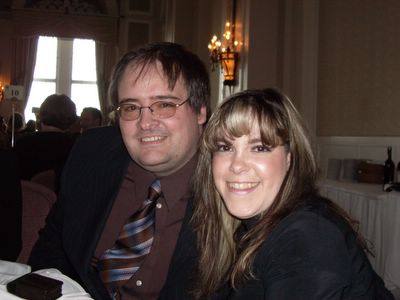 Earl & Sylvia at the BPAA Awards

Jim Hole's book What Grows Here, Volume One: Locations was nominated for trade non-fiction book of the year by the Book Publishers Association of Alberta. Everyone in the publishing department attended the awards ceremony last Saturday at the Fairmont Hotel Macdonald, but Linda Goyette's Edmonton: In Our Own Words walked away with the trophy. Still, everyone had fun, and wow, our table definitely had the best-looking women. I don't mean that in a sexist way; I just looked around the table at one point and thought to myself, "Huh. What a good-looking bunch."

During the course of the evening, I found out that Sylvia was once into wall-climbing, and appeared on Access climbing the walls. Now she does it at home without the benefit of a television audience.
Posted by Earl J. Woods at 7:57 pm 3 comments:

Be Still My Life 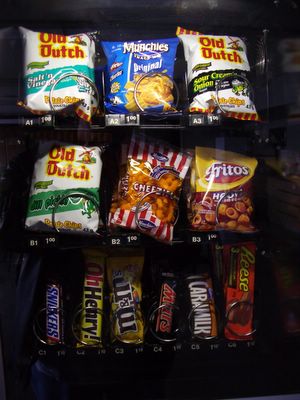 Check out my new comic strip, "Filberts." See if you can guess the clever meaning behind the name!
Posted by Earl J. Woods at 7:47 pm 5 comments:

Filberts
Posted by Earl J. Woods at 7:36 pm No comments: 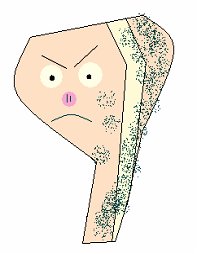 Little is known about Pork Chop Oink. He has been working with the Minions of CHAOS since at least 1987, and probably for far longer. His super-powers are undaunting, but his malice and vitriol are unmatched by any in the Minion camp, including such bitter stalwarts as Irrational Carrot, Teeth-Filled Cyst, and The Amazing UGH!.

When last encountered, Pork Chop Oink was working in Detroit, Michigan, as a pimp. When turned down for a date, Pork Chop Oink is often heard to complain, "What am I, chopped oink?"
Posted by Earl J. Woods at 9:13 pm 1 comment: 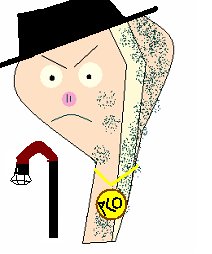 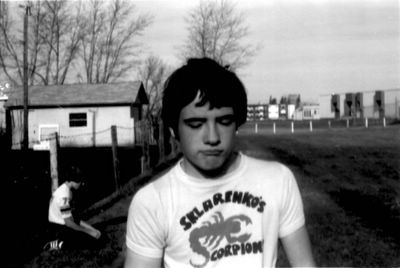 I shun you, kneeling one.

A couple of days ago, Bruce told me, "Your life is running you." The implication being that it should be the other way around.

He's right, and it's why I haven't updated this blog in over a month.

Now, to more interesting business: the photo. Though it's obviously very old, it's new to me: I spent a weekend scanning old negatives I had tucked away in one of my photo albums, and this was probably the most intriguing picture of the bunch. That's me, of course, walking towards the camera, and I recognize Leduc Junior High School in the background. I took a photography course in Industrial Arts in Grade 8, so the year is probably 1982 or 83. I don't know who's kneeling behind me, nor do I know who took the photo. I recognize the "Skarenko's Scorpions" shirt I'm wearing; Miss Sklarenko was my Grade 6 teacher, and she gave us the shirts.

Was the photo something I staged with a classmate or two? Or did one of the other guys in the photo class just shoot a candid that happened to have me in it?

I have no idea. And it makes me angry. We lose so much as we grow older. Memories should not be lost so easily.
Posted by Earl J. Woods at 8:57 pm 3 comments: