The Wont of a Nail

Saturday gave me a lot to think about.

It was my brother's 33rd birthday, and I was regretting my inability to find a Black Belt Jones poster for him, hoping that the Robby the Robot bank I found would be interesting and unusual enough to amuse him.

Sylvia and I rose early so that I could load a bunch of cardboard into my car for recycling and hit an ATM for some cash for our new housekeepers, who were to arrive that morning. 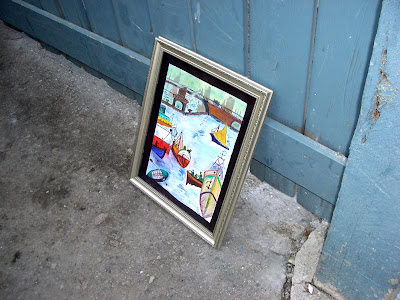 I stopped the car to dispose of some garbage and found this painting. I paused, because I'm currently taking a graphic design course from Jeff Shyluk, and art history is a major component of the course. I'm scared to critique this because I can't identify it. Could someone have abandoned a master's work by the trash? 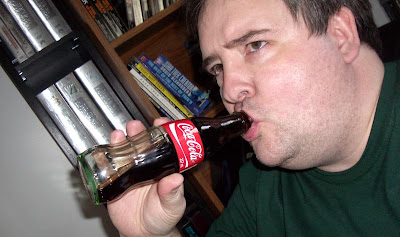 I drove to the recycling station near SuperStore and disposed of my cardboard. Then I entered SuperStore to purchase some Pepsi for Sylvia, and found, to my delight, six-packs of Coca-Cola in glass bottles. But the contents of my groceries shifted in the trunk, and when I opened the lid to retreive my booty, one six-pack of Coke fell to earth and two bottles smashed upon the asphalt.

Grumbling, I gathered up the surviving soldiers and went upstairs to our condo for a broom and dustpan. Our housekeepers had arrived in my absence, and were busy sterilizing our home, much to Sylvia's delight.

I swept up the shards of glass and walked over to our condo's garbage bin. On the way, a man asked me, "Are you Quentin?"

"Nope. Just a guy with a bunch of broken glass," I replied, using my best smooth talkin' grifter voice. I flung the glass into the trash and returned to the condo to hand over the cash (to the housekeepers).

When the housekeepers left, Sylvia and I gathered up Sean's presents and drove south, along the Anthony Henday, to Joey's in South Edmonton Common. My parents and brother had already arrived. Sean performed a hat trick, flipping his hat through the air to land on his head. I asked him to do it again for the camera, but the second attempt was unsuccessful and Sean was unwilling to make a third.

We ate. Sean had a chicken thing, Dad had a beef dip, Mom had hot wings, Sylvia had blackened Cajun basa, and I had some kind of chicken thing. A thing on a bun.

We left. Mom and Dad handed over some Super 8 mm film, which I plan to tranfer to DVD using the services of Cine audio visual, or perhaps London Drugs. Sean went with Mom and Dad, and Sylvia and I went to IKEA.

We purchased BOOBLI curtains. Sylvia liked the colours; I liked the Tarzan of the Jungle pattern of leaves. We purchased a DAVE laptop stand, seen here: 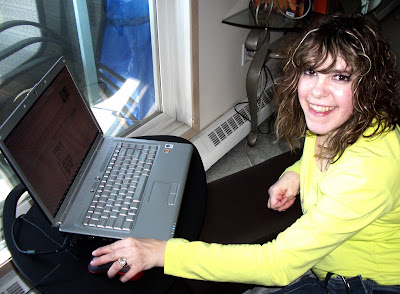 We purchased a clay pot and saucer, for Sylvia's transplanting plants plan. The pot and saucer fell from the cart seconds after the IKEA teller rang the purchases through. She rushed out and told us she'd see we received replacements. Minutes later, the debris was disposed of (I cut my finger) and another IKEA person brought us a new ULBGORT and BOOGINK.

We left. Hmmm, I thought to myself. Today I smashed four things: two retro Cokes, a clay pot, and a clay whatever-you-call-the-thing-you-put-under-a-clay-pot-to-catch-the-excess-water. 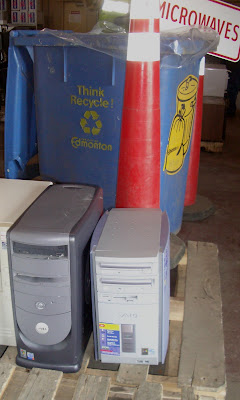 We drove to the City of Edmonton Eco Station on 51st avenue and 99th street, where I disposed of my old Dell and VAIO computers. The Dell caused me problems from day one; the VAIO served faithfully and well for many years, and was in fact still fully functional until I ripped out its hard drives. Shades of Dave singing "Daisy."

We returned home. I built the (other) DAVE for Sylvia. I watched last week's episodes of 24 and Heroes.

Later, I gently stubbed my left big toe. That's the toe with a slightly ingrown toenail - nothing serious or even noticeable, except the flesh is tender if disturbed.

I looked down at my toe and wondered why I perceive of the toe as "my" toe, as a possession. My toe, my fingers, my chin, my back, my arms, my spine, my stomach, even my brain, my mind. These are the things, conceptually, I own.

I thought, not for the first time, that I think of myself as the bit up inside my skull that talks, the silent voice that is thinking these words as I type them into the "new post" window.

I wondered why it is that I should exist as a consciousness mapped onto the grey matter of my brain. I understand that there's a biological reason, but what's the metaphysical reason? If there is a reason at all, which I do not presume.

I wondered if perhaps my body was just an extension of some greater being, a universal consciousness using me to sense and experience and move through our three dimensional world in the same way that my brain directs my fingers to type these words.

I wondered if each human being - or every sentient being - is perhaps just a sensory organ of some greater thing, the universe itself using bits of matter to experience this reality we struggle to understand.

I wondered if Sylvia and I and our parents and our siblings and neighbours and friends and everyone else are actually just different aspects of that same being.

A being who, a long time ago, thought to itself, "I want to experience life as a Caucasian male born in Flin Flon, Manitoba in 1969 who becomes a moderately successful professional writer and breaks four brittle things on a spring day in 2009."

Maybe those shards of glass and clay, the ones I cleaned up yesterday, were the entire reason for my existence. Who knows?

I should really take care of this ingrown toenail.
Posted by Earl J. Woods at 8:13 pm

Art clases have made you AFRAID OF ART!!! EXCELLENT!!! The process of breaking down Ye Olde Earle has begun!! The process of rebuilding New World Earl can now begin!! (After you take care of that toenail, of course. Art cannot compete with a metaphysical foot wound).

Analysis of art is like anything else worth doing: you break the task down into small manageable steps.

DO YOU HAVE A MASTERWORK?

Step 1: Is the picture signed? Most of the Great Masters were raving egotists who never resisted the impulse to gratuitously cover up some integral corner of their work with their name scrawl. Also, really crappy artists sign their work, too. That can make it difficult to figure out if you have a masterwork or not, unless you spend hundreds of dollars for art courses so that you can feel better about wearing all black on a sunny day. That and art classes can also help you remember who the Great Masters were. I.e., Da Vinci = YES, Da Vinchy = MAYBE NOT.

Step 2. Looking At Composition. Are there Masterworks that have been thrown away in Edmonton? Mostly, no. However, let's look at the picture itself. Does the picture take place in Edmonton? The harbor scene with many colourful cargo ships would suggest: no, this is not Edmonton. The snow-coloured water does remind one of the vast expanses of white weather one can find in Canada's North, so maybe this picture is from Edmonton. Lastly, there is the cityscape of the background wreathed in green smog. That positively pinpoints the location as North Edmonton, out by the refineries. All you have to do now is carry the picture around Refinery Row until you find a visual match. See how easy art appreciation is?

Step 3. Is the picture framed? If so, never throw out a free picture frame! Have you ever been in a framing store? Often the frame costs much more than the picture itself, even in the rare circumstance where the picture seems to look better than the frame (see the reference to Da Vinci -- this artist seems to have a good track record for making paintings look better than their frames). Long story short: frames are super-costly, and many a collector has come to financial ruin at the hands of unscrupuluous frame vendors.

Step 4: Check behind the frame. Ever since that guy found a copy of the American Constitution behind a picture, it's been considered good form to take an X-acto knife to paintings to see if they are hiding any treasure. Some people use the knife on the back of the picture, and some people use the knife on the front. Decide in advance which side to cut. If the painting has a picture of Elvis, then cut the backing. Otherwise, the choice is yours.

Be suspicious of "Old Masters" offered for sale at Petro Canada.

Think twice about paintings in frames made from gilded macaroni.

Be sure to check out the Museum Of Bad Art (MOBA):

My Japanese friend was very amused by Robbie the Robot.

Apparently one of the phrases on the box translates, literally, to "comes in box."

I see that you are an avid recycler... but I wonder, couldn't you have recycled the glass from the broken Coke bottles, even if they were broken?

Loved the post. Those who have great gaps in blogging shouldn't nitpick I suppose. Now I am nitpicking myself... the world is crazy!

I don't believe depots will accept broken glass due to the risk of injury to workers...but I could be wrong.