Hi, everyone - I'm experimenting a little with another webpage, using the long-neglected webspace that comes with my Shaw account. If all goes according to plan, right now there should be a couple of photos of me cavorting around Commonwealth Stadium; Jim and I were down there this morning for an Epcor/Hole's Wise Watering media event. See the photos here.
Posted by Earl J. Woods at 8:45 pm No comments:

I like mischief. I can't remember when I first came up with the notion of inserting peanuts into the unsuspecting ears of my friends, but the idea soon took irresistable hold of me. I believe the first to fall victim was my brother; I snuck up behind him and with one fluid motion, stuck the unshelled peanut into his ear. His reaction was quite satisfying, and later on I tried it out on my friend Ron Briscoe. It was my first visit to California, that long road trip down to LA, fifteen members of the U of A Star Trek and Scuba clubs crammed into one van. We stayed at a hostel near the famous Korean Bell, and when Ron went to bed, I waited patienty for him to fall asleep and crept out of my bunk with a peanut in each hand. I leaned over Ron, and just as I was about to drive the peanuts home, his eyes snapped open.

Foiled, I retreated. But my greatest peanut victory was yet to come.

A couple of years later, several Star Trek Club alumni attended the Namao International Air Show. Ron was there, and so was Steven Neumann, his sister Susan, and her boyfriend Jeff Shyluk. Naturally peanuts were served, and as we reclined on picnic blankets and watched the ballet of the jets overhead, I couldn't resist casually tossing a peanut in Jeff's direction.

Much to my surprise, the peanut sailed in a graceful arc, closed the two-metre gap between Jeff and I, and landed directly in Jeff's ear. Jeff immediately clapped a hand over his ear and his eyes goggled in disbelief.

More recently, I managed to sneak a peanut into Sylvia's ear, catching her completely by surprise on the couch. Her reaction was almost as satisfying as Jeff's. However, the aftermath has convinced me that perhaps now would be a good time to put away childish things...i.e., silly pranks.
Posted by Earl J. Woods at 10:16 am No comments: 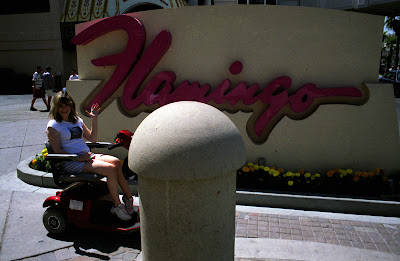 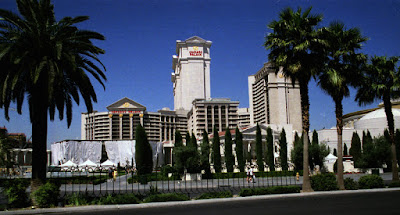 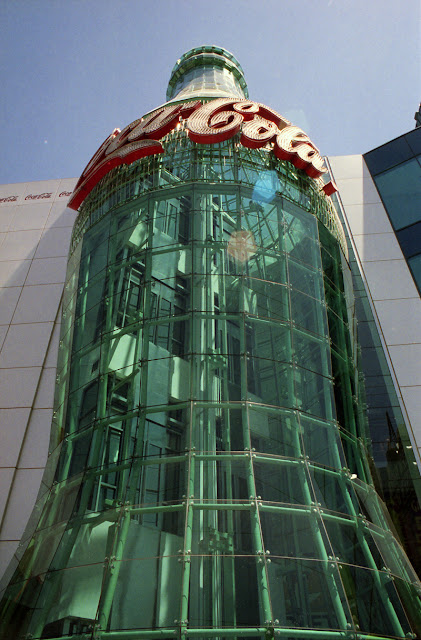 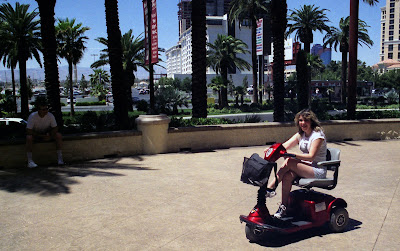 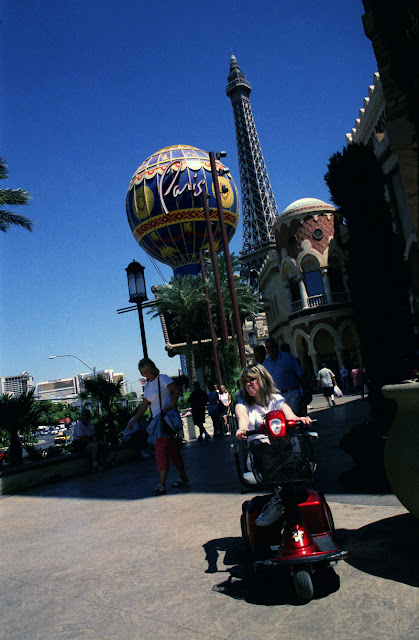 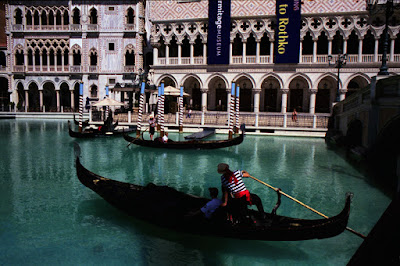 Anyway....that was the end of the second day. Day three wouldn't be quite so much fun...
Posted by Earl J. Woods at 8:39 pm No comments:

And we're back! What a long, strange couple of weeks it's been. The last of my hacking and coughing seems to be winding down, thank goodness.

So how about that excursion to Las Vegas? 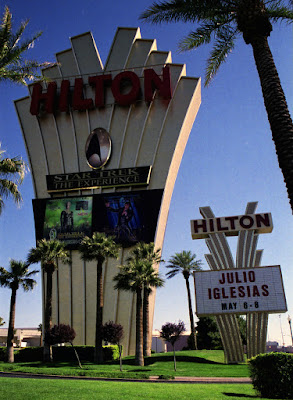 Well, let me tell you. For me, the highlight had to have been taking Sylvia through the Star Trek Experience. 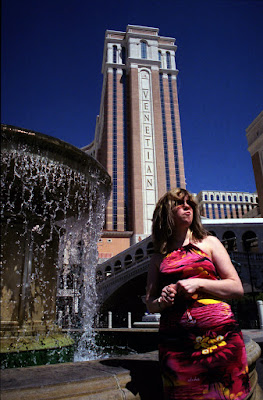 We rented a scooter for Sylvia - she was afraid of slowing me down, since I'm normally a pretty fast walker. 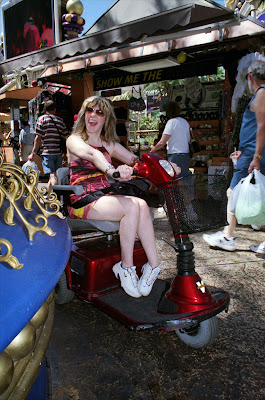 I walked alongside her as we journeyed from the Imperial Palace, our hotel, to the Las Vegas Hilton, home of the Experience. 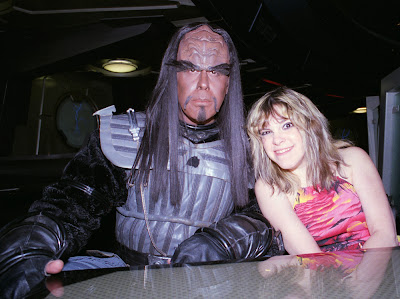 Once there, we went through the Klingon Encounter, which I've seen before, and the new Borg Invasion 4-D, which really was incredible. Live characters all around you, Borg popping out of the walls, people screaming, consoles exploding...it was wild. Sylvia got quite a kick out of both rides. 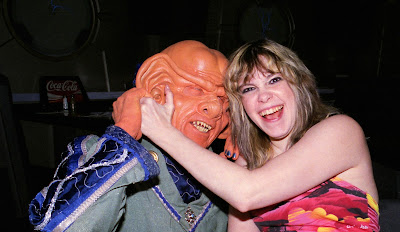 But the best part was down at Quark's restaurant, where Sylvia got to give a Ferengi waiter some pretty intense oo-mox. The Ferengi seemed a little surprised by Sylvia's ardour, but he certainly seemed to enjoy it - and I have a picture to prove it. 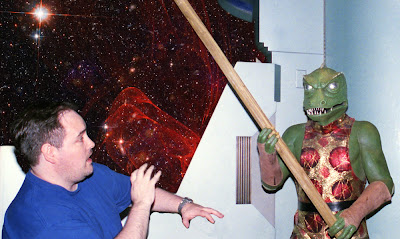 Earl versus the Gorn. 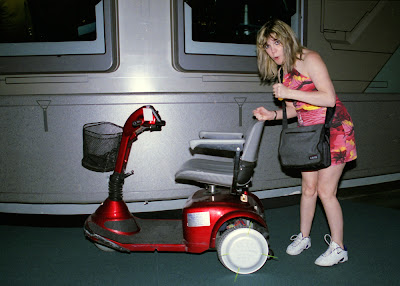 Sylvia's scooter got ticketed by the Ferengi, complete with the Ferengi Boot (a styrofoam plate with Ferengi swizzle sticks) and tickets demanding several strips of gold-pressed latinum. Fortunately, a friendly Federation officer got rid of the boot for us.

However, the trip back wasn't quite so much fun. My walking pace had rapidly slowed after about an hour's journey down the Strip - the temperature hovered around 40 degrees C, and there was little shade to be found. By the time we reached the Hilton, I was really dragging my feet, and while our stop at the Experience revived me a little, the journey back was...daunting.

Since the outbound leg of the walk had proven so lengthy (maps in Las Vegas are not to scale), we decided to take another route back to our hotel. We were trundling along pretty well for a while - Sylvia and I doubled up on the scooter to save my feet. At first things went fine - we used a very well-maintained new sidewalk next to one of Las Vegas' busiest avenues. 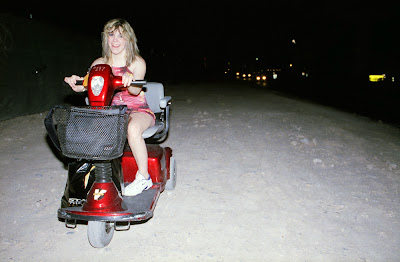 But then , a couple of kilometers away from the Hilton, the smooth sailing ended and the sidewalk abruptly vanished, replaced by a very narrow strip of bare earth. The cars of Las Vegas continued to rush by, their drivers no doubt amused by our plight. 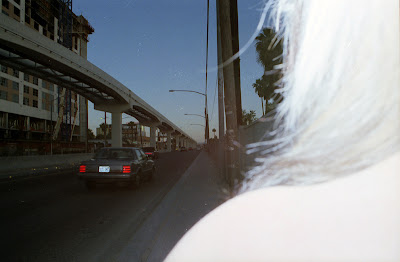 Here began the real adventure. I had to abandon the scooter so that Sylvia could gingerly navigate the machine along a rubble-strewn dirt pathway, periodically blocked by supports for overpasses and the monorail. Whenever we came across one of these obstacles, Sylvia would dismount and I'd have to lift the scooter into the freeway and haul it around the post - without getting hit by the insane Las Vegas traffic. Keep in mind that I was already exhausted, the scooter was insanely heavy, I was trying not to damage it, and had to duck in and out of traffic like Frogger.

Sylvia, naturally, was getting quite a kick out of all this.

The terrain got rougher as we went along, and more desolate. I knew we were pointed in the right direction, but pedestrian traffic along our route was limited to less than a half-dozen other souls, compared to the thousands we encountered along our original course. Sylvia had to dodge rocks, open pits, broken bottles, fallen road signs, endless flyers for escort services, and some debris I was afraid to identify. This, I thought, was the real Las Vegas.

Finally I saw sidewalks in the near distance, and even more encouraging, the lights of the Strip. Sweat poured down my body in sticky rivers as I staggered alongside Sylvia's happily whirring scooter.

We reached one more obstacle, another open pit that I'd obviously have to lift the scooter past. Poor Sylvia had to wait while I dodged traffic with the scooter yet again, and when I lifted the mechanical monstrosity to safety once more, I looked back to see that Sylvia had fallen into the pebble-strewn orange dust. I dashed to her side, only to discover that she'd fallen simply because she'd been laughing so hard at my antics.

After dusting off her dress, we returned to the scooter and prepared to make one final break for the sidewalk, just a few lanes of traffic away. There was no designated pedestrian crossing, but we figured that the red lights would serve just as well.

The lights changed, and we made a break for it, neither of us actually using the scooter - we'd been too caught up in watching the traffic to actually hop aboard. There was just barely time to scramble across, but we made it to safety just as the traffic resumed its deadly, inexorable flow.

We returned to the hotel within another half hour or so, with no further incident. 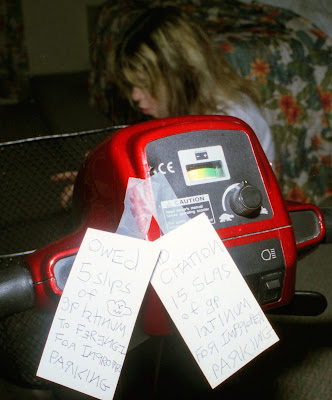