A Little Inside Joke 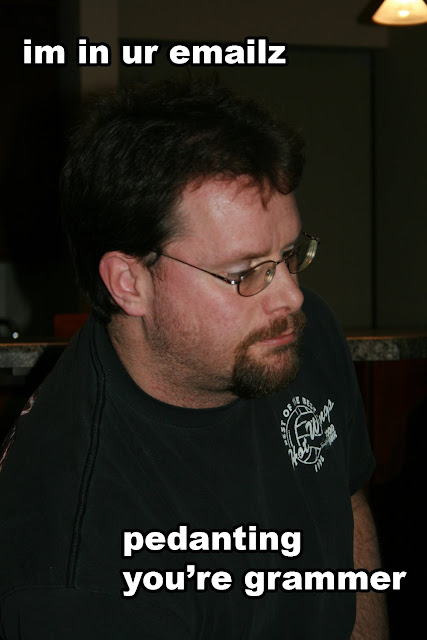 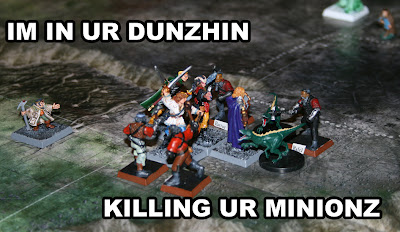 I had to try one of these eventually.
Posted by Earl J. Woods at 6:40 pm No comments:

Etsell House Then and Now 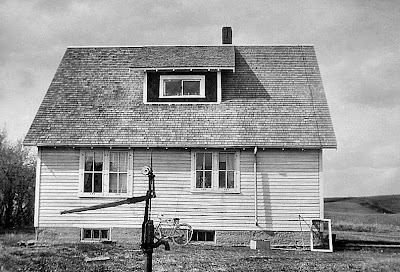 My Aunt Jean emailed the family some photos from the 1950s. Here's one of the old house on the Etsell farm - the home of my maternal grandparents. This is how the house looked in 1950. 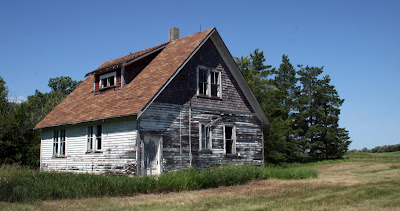 This is how it looked in 2009, when Sean and I visited. Despite years of neglect, it seems to be holding up reasonably well, though the inside is pretty filthy thanks to animal infestations.
Posting this reminds me that I have yet to chronicle Return to the Edge of Nowhere, the story of my final (?) visit to Leaf Rapids. Our visit to the Etsell farm was part of the first leg of that journey.
Posted by Earl J. Woods at 6:24 pm No comments:

Call Me Out at the Ball Game - Game 1 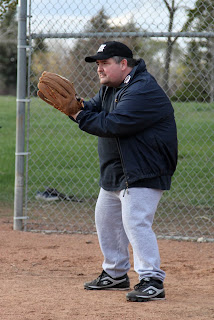 Tonight the Liberators took the field for the first game of our slo-pitch season! For the first couple of innings I stayed behind home plate as catcher. Actually managed to catch a few pitches and return them to Tanara's glove. Not bad. Well, bad, but you know...I'm at the scary end of the bell curve for this sort of thing.

We were outmatched by the other team, seen here looking on with confidence as I react in stunned disbelief. I'm not sure of the exact score, but I think they beat us by a dozen runs or so. 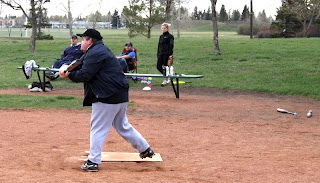 However, on a personal level, I was as surprised as anyone when I managed to connect with the ball all three times I tried. I hit two singles, and the third was a drive between second and third that was caught by the opposing shortstop. So two out of three...I guess that's a batting average of .666! Pretty good for someone that hasn't played baseball since junior high school. 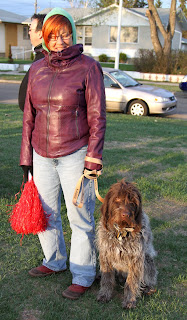 Laurie Blakeman, Deputy Leader of the Official Opposition, came out to cheer us on. 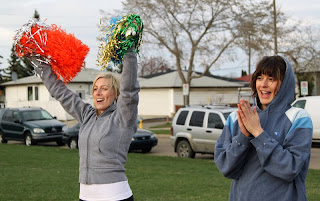 Avril and Kim cheer on the team. 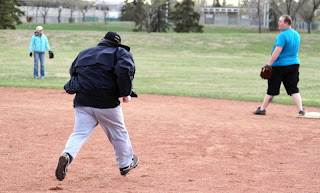 Running to first base. I think it's been a while since my feet left the earth. 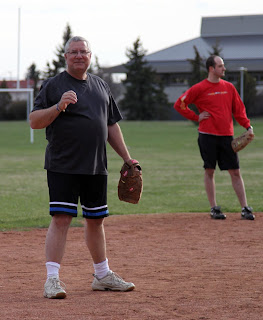 Chief of Staff Rick Miller was an able third baseman. 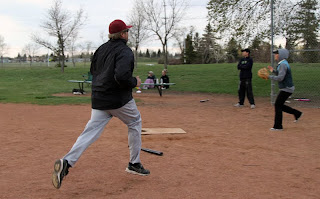 Rick's son Chris Miller was one of our more gifted players. Here he scores a run, fleet as the wind. 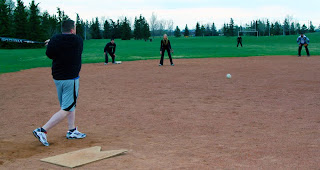 Communications Director Neil Mackie hit a solid shot into the infield, but didn't quite have the legs to make it to first before being tagged.
We didn't bring home a victory this time, but I think everyone had fun. And I got a little exercise, with the bumps, bruises and grass stains to show for it.
Posted by Earl J. Woods at 10:07 pm 8 comments:

Call Me Out at the Ball Game - First Practice

My colleague Tanara at the Official Opposition has organized an Alberta Liberal slo-pitch team - the Liberators. Desperate for some exercise, I signed up, despite my legendary lack of prowess at sports. Late this afternoon, we practiced together for the first time.

The very act of buying a ball glove a couple of ours before the practice was in itself enough to make me feel younger. I found myself looking forward to finding out if I could still catch or hit a ball.

I'm happy to say that the answer is: yes, barely. After some batting practice (during which I took a header into the grass and earned my first bloody wound and first grass stain), we organized a trial game.

I took up a position behind home plate, and actually managed to catch a couple of pitches and toss them back to the pitcher - Tanara again - somewhere in the vicinity of her glove. That's Avril, one of our researchers, at bat. 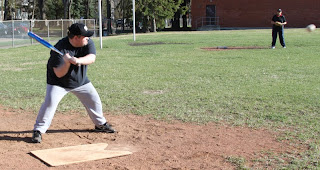 My first at bat was a qualified success. Our receptionist and pitcher Lisa hit in the shoulder and I took my base. A couple more hits from our team, and I found myself rounding home plate. First run of the season! If only this game counted.
(During one memorable game back in the 70s, I took no less than three bases thanks to errant pitches: two to the groin and one to the butt. This was fastball, too. It really wasn't worth it. I remember the pitcher's tears of remorse, and I still feel bad for him.) 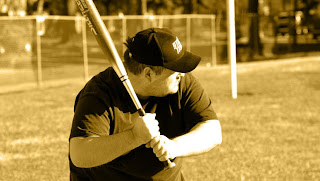 Getting on base was satisfying, but I really wanted to see how far I could hit the ball - or if I could even hit it at all. My second at-bat would tell the tale. 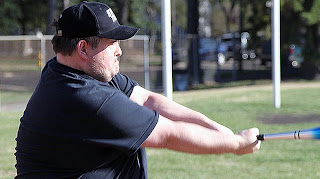 Crack! A solid hit that pounded the ball between second and third. I launched myself toward first base! 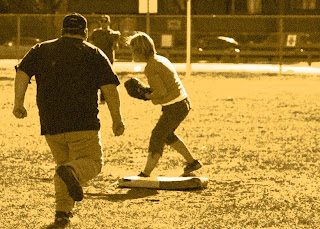 Sadly, I was tagged out at first. My third at bat was an anticlimax; I struck out cleanly.
Tomorrow night we'll play for real for the first time. Practice was a lot of fun; I imagine the real thing will be even more satisfying, win or lose. Once in a while, it's good to use my body for something other than carrying my brain around. I'm sore all over, but it's a righteous pain, well-earned. I'm grateful that Tanara took the initiative to organize our team.
Here are a couple more shots of our other team members in action: 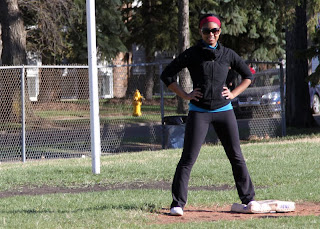 Team Captain Tanara McLean at third base, just before scoring a run. 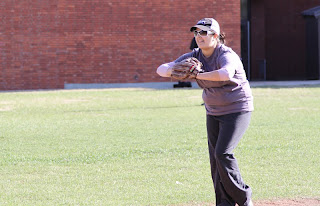 Lisa Bowers not only brought all the balls, bats and bases, she's also a very good pitcher (I was the only player she hit) and batter. We will be unstoppable! 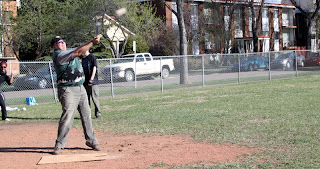 Rick Miller smacks a triple! I think it was a triple. He's my boss, so let's say it's a triple. 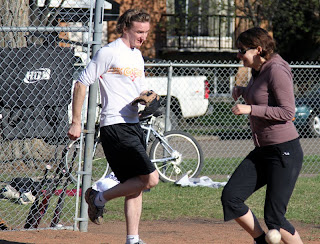 OUCH! Kim Dewar is struck by a flung ball at home plate! You can see the mark it left on her left upper thigh. The ball is just about to fall out of frame. Dramatic action in the closing moments of the game!
Posted by Earl J. Woods at 8:13 pm 2 comments:

The Downfall of Fair Use?

Like countless others, I've enjoyed the multitude of so-called "Downfall Hitler" parodies on YouTube. Each parody superimposes amusing English subtitles over a pivotal scene from the 2004 German film Der Untergang (Downfall).

The movie is about the last days of Adolf Hitler as he waits in his bunker for the end of World War II, but dozens - perhaps hundreds - of budding editors have twisted Hitler's dialogue to comment on all manner of pop culture topics, from the fight between Clinton and Obama for the Democratic nomination to the HD-DVD vs. Blu-Ray war to Edmonton Oilers performances on the hockey rink.

Now the film's rightsholders are using technology to strip the videos off of YouTube, despite the protection these works should have as parodies or derivative works. You can see the results in the video above. The parodist may need to work on his spelling, but the point remains powerful; large media companies are stifling creativity and free expression, even when the so-called infringement does no harm to the original work. In fact, I am certain that the Downfall parodies have inspired thousands, perhaps millions, of people to seek out the original film.

As an artist - however middling - I believe that authors and creators of all kinds should be fairly compensated for their work. But not at the cost of hampering expression.

Thanks to changing copyright rules, some works that should have been in the public domain years or decades ago remain in the hands of estates or big corporations, long after the creators and their immediate family have died. Warner Brothers, it seems, will never allow Superman to fall into the public domain. Nor will Sherlock Holmes. And that's a shame, because just imagine if Kenneth Branagh or Joss Whedon or Margaret Atwood had the freedom (and the desire, of course; I'm assuming much, here) to craft new stories based on the original concepts. Imagine if Bram Stoker had written Dracula just a few years later; we may never have seen Coppola's version, or the various Hammer Draculas; for that matter, the character couldn't have appeared on Buffy the Vampire Slayer without expensive clearances. Dracua haunts the public domain, so all of us are free to write stories about him, just as Disney has been free to make movies about scores of public domain stories.

Draconian content rules threaten to freeze popular culture in the early twentieth century. Even worse, they're beginning to restrict political thought and expression.

Fair use is an important right. We shouldn't let corporations take it away.

Thanks to Mike Totman for inspiring this post.
Posted by Earl J. Woods at 10:06 pm 4 comments: