My Kung Fu is Stronger Than Yours

On Thursday, Sylvia and I met Sylvia's parents at Joey's Only to celebrate Sylvia's mom's birthday. The subject of "brain freeze" came up - that is, the painful headache that occurs when you eat or drink something cold way too fast.

So I mused aloud, "They should have a movie in which an action hero is fighting a bad guy, and the good guy has no weapons, while the bad guy has a knife. Fortunately there's an ice cream vendor close by, so the good guy grabs a triple-scoop cone from the vendor's hands and stuffs it into the open mouth of the bad guy. The bad guy instantly gets a HUGE ice cream headache, which distracts him enough for the good guy to disable him."

Sylvia's parents seemed to think it was funny, but I think it could be a really gripping action scene. The hero could say, "Now you scream for ice cream!" or "Now our Revellos have just begun!" A bystander could say, "Wow, he creamed him!" or "That's putting him on ice - ice CREAM, that is!"
Posted by Earl J. Woods at 1:33 am 6 comments: 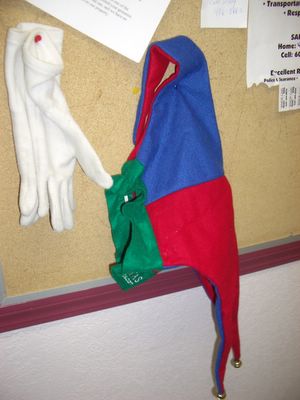 Somewhere, a jester is crying

Sometimes, lost items are pinned to the mail room bulletin board at my condominium complex. On Monday, I discovered that some poor fool - literally - had lost his jester's cap and gloves. Some bereft Punch or Judy is now gloveless, hatless, propless and mirthless.

Ah, sorrowful jackanapes!
Whose hat and gloves somehow escaped
Your merriment and joyful japes
Your jokes fermented to sour grapes.

The lost chapeau of a faceless jester
Whose juggling now will surely fester
An uncrowned head, a bald-faced fool
An instrument of royal rule

The winds they robbed the fool of hat
And that, my blahging fans, is that.
Posted by Earl J. Woods at 9:59 pm No comments: 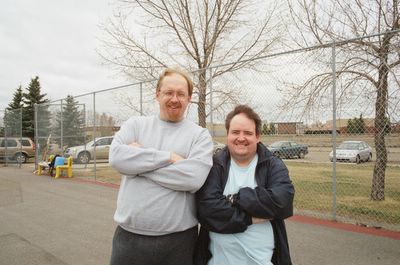 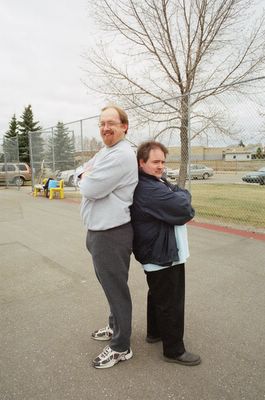 Rob and Earl do the publicity shot thing.

Another clever "Vogt-Vote" pun to accompany a couple of nice shots of Rob and I. Sean took these two photos, and I think he did quite a nice job.
Posted by Earl J. Woods at 9:46 pm No comments: 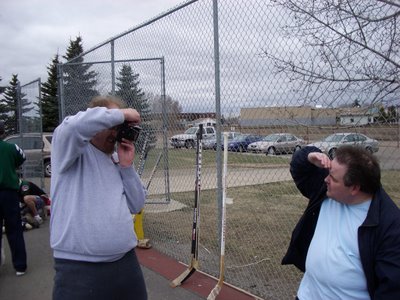 My old friend Rob Vogt came up to Leduc for Sean's ball hockey classic! Once a fellow denizen of Lister Hall (and my floor, Main Kelsey), Rob is now a big-time newspaper editor. Go Rob! Here, he displays his journalistic acumen by snapping a photo of newly minted political crusader Earl J. Woods, who is just uncool enough to refer to himself in the third person. Earl J. Woods thinks it's cool!

I'm Looking Through You 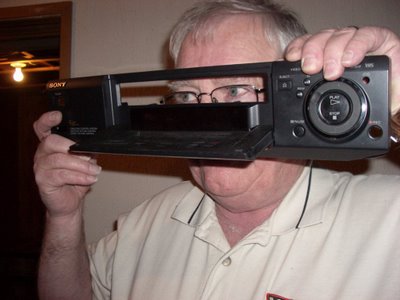 Dad admires the efficiency with which I smashed a nonfunctioning VCR. 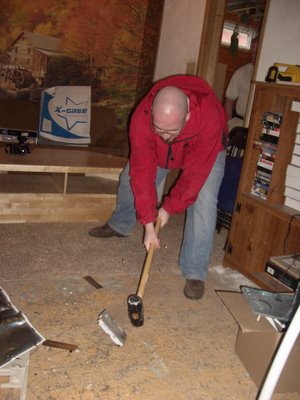 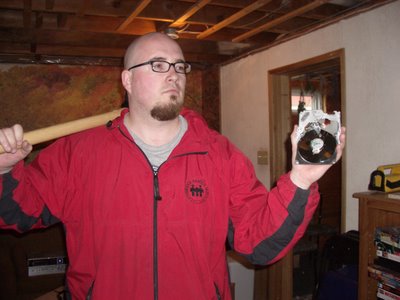 Ready for the Recycling Depot 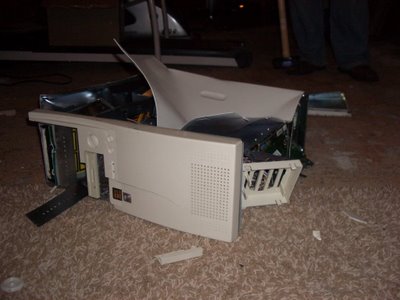 Always ecologically conscious, Dad assured us that he would take the shattered remains to the Leduc eco-station. 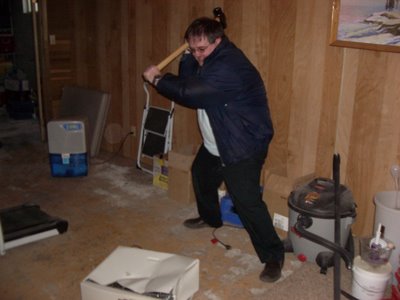 "Why don't you just remove the hard drive from the computer and destroy that?" asked our patient father.

"That's what we ARE doing," Sean and I replied. 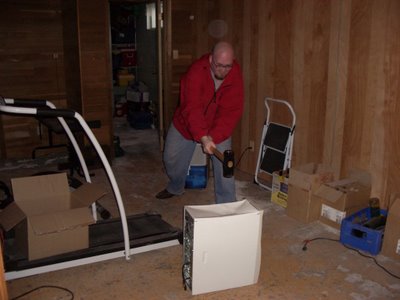 Sean puts the old Pentium II out of its misery. 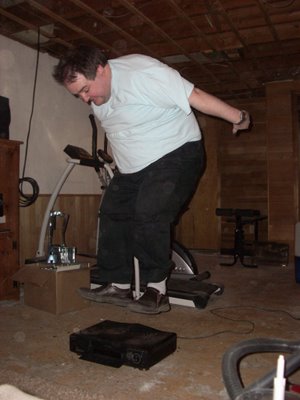 This weekend, my brother Sean and I went out to our parents' place to smash their old computer for them. The idea was to disable the hard drive to destroy any data, but we got a little carried away, as usual.

For other weekend activities in Leduc, check out Sean's blog - particularly if you're a fan of road hockey.
Posted by Earl J. Woods at 9:03 pm 2 comments:

At about the midway point of G&G, we stopped to enjoy pizza in Steve's kitchen. We noticed that a car on the street outside was clearly deeply mired in the growing drifts. Steve, Scott and Rob, all large, strong types, ventured out to offer assistance. For a moment I dithered, then slipped on my shoes to help out. Steve noted that the three of them should probably be enough to extricate the stricken vehicle, but I shrugged and went along, noting that on a night like this one, you couldn't have too much karma saved up.

So we went out and pushed, sent the blushing driver on his way, and returned to Steve's basement.

A few hours later, I decided I was going to head home. The boys pushed me out of my parking stall and I was on my way...

...for about two blocks. Rounding a corner on one of the snow-packed streets, I was forced to give way for an oncoming truck and found myself thoroughly stuck. For ten minutes, I shovelled, rocked, pushed, shovelled some more...until at last a friendly group of neighbourhood residents emerged from their homes and gave me the push I needed to escape. I made it home without further incident.

On the the drive home, it occured to me that my thoughts on karma had been prescient - and I noted with some amusement that I'd subconsciously set myself up for a demonstration of karma's power much akin to the situations seen on the current sitcom hit, My Name is Earl.

That made me smile.
Posted by Earl J. Woods at 7:27 pm No comments:

Email ThisBlogThis!Share to TwitterShare to FacebookShare to Pinterest
Labels: Gaming and Guinness, My Name is Earl, television 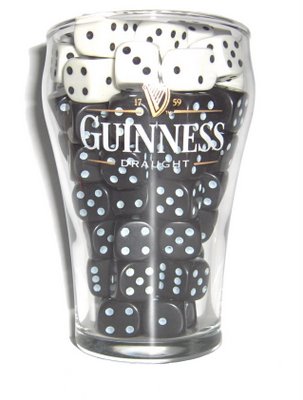 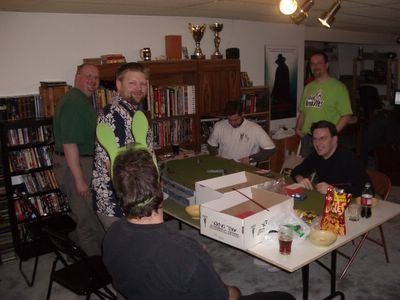 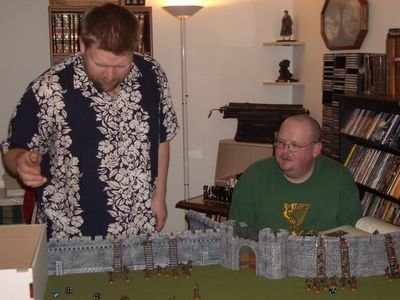 Scott and Steve (Hey, Lost reference!) defend the walls of Minas Torth (or whatever) 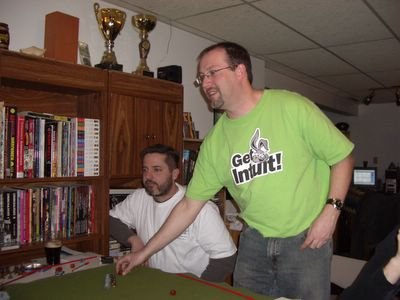 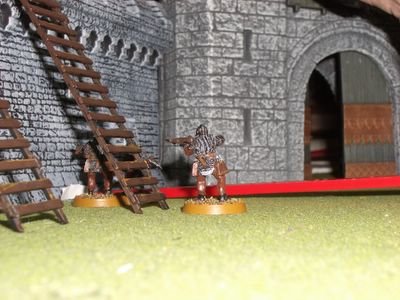 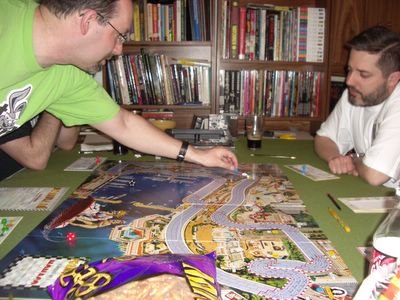 From Middle Earth to the Middle of a Race...how narcissistic is it that I remember I came in second in the first race, but I don't recall who won? (I think it was Mike P.) 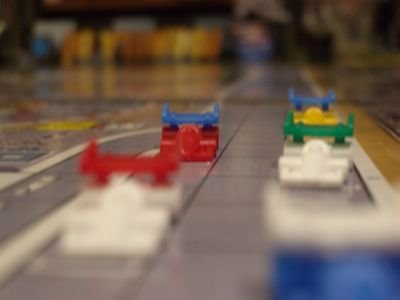 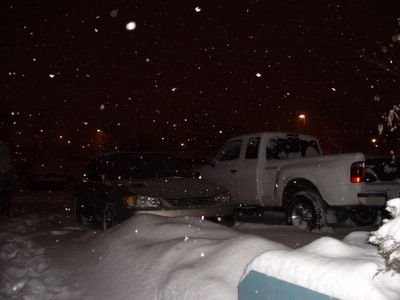 After watching MST3K ("Mitchell", one of the finest episodes), I returned home. That's when the great snows came... 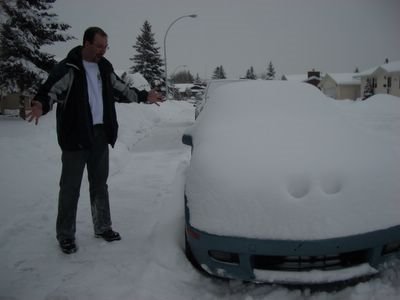 By morning, Pete's car was buried. But winter's wrath could not stop G&G! 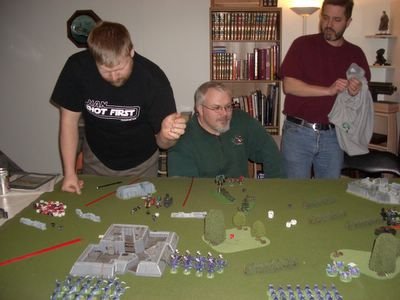 Defying the blizzard, we gathered for a round of Warhammer, pitting meticulously-painted armies of goblins and trolls against each other. Note Scott's stylish "Han Shot First" t-shirt, a fine example of Krypto-revisionism. 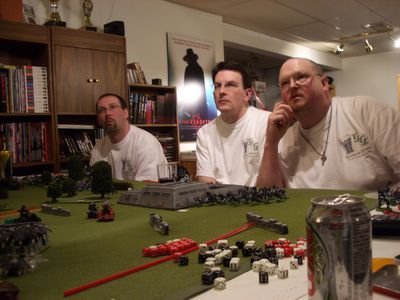 Pete, Rob and Stephen weigh their options as the fierce tabletop battle rages. Note V for Vendetta poster at rear, a film we went out to see scant hours before. 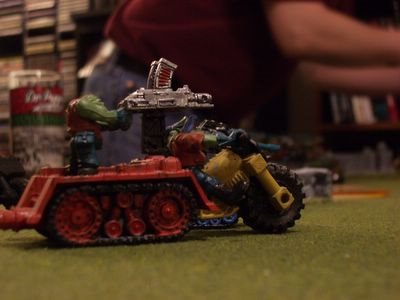 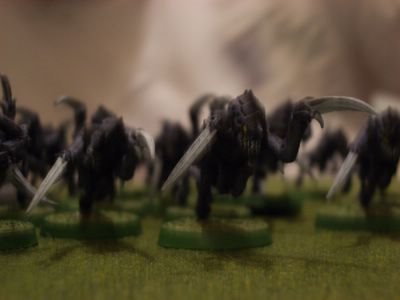 Scary critters threaten to rend all who oppose them limb from limb! FLAWLESS VICTORY!

A panorama of the battle. Note Mike T at far right, grinning maniacally. As always, don't forget to CLICK TO EMBIGGEN!

Not long after snapping this last shot, I left to brave the snow-clogged roads - a story I'll defer to the next post. Thanks to Stephen and Audrey for offering up their home, and to Steve in particular for organizing a most enjoyable time. It was great to see Mike and Rob again, and here's hoping this becomes and annual event.
Posted by Earl J. Woods at 6:31 pm 3 comments: