A couple of posts back I mentioned that as a child in Leaf Rapids, I used to play in a bin of Zorball. For those who were wondering, and who missed my answer in the comments, Zorball is/was a brand of some kind of rocky, itchy pinky/orangey powder used to absorb spills - oil spills, grease spills, industrial/automotive stuff.

I spelled it incorrectly in my original post, which probably frustrated Google searches. Sorry about that!

It appears that Zorball is still for sale.

Also, the Zorball I played with was not this kind of Zorball, more's the pity:


Love to ride that thing down into the sinkhole!
Posted by Earl J. Woods at 11:07 pm No comments:

That One Dream You Always Have, You Know the One 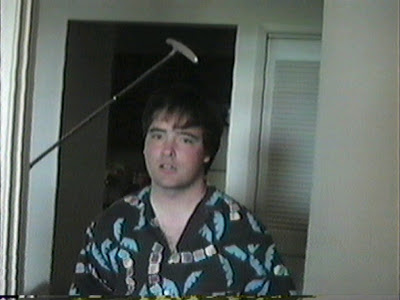 Jeff's entertaining analysis of my Captain America dream, combined with tonight's visit from my old Lister Hall friend Joanne, reminded me of one of the consistent recurring themes of my dreams: an imagined failure to earn my degree.

The circumstances are nearly always different, but there are common recurring elements:

1) The sudden recognition that I forgot to take a certain course, therefore my degree is invalid. The course could have been as early as junior high, invalidating all my progress from that point on.

2) An academic or professional setting.

3) Panic that I'm going to have to go back to school all over again.

4) Realizing that some important test - not necessarily an academic one - is imminent, and I've forgotten to prepare for it at all.

And then I wake up.

I've always been fascinated by dreams. Mine have always been very vivid and real, to the point that sometimes I'll wake up a little startled, as if I've been suddenly yanked from one reality to another. This is no fun when the dream is a nightmare, but when it's something more pleasant, such as a dream of flight or an adventure story...it's sublime.

Usually, writing about dreams or describing them to friends is an exercise in frustration. Rarely are my dreams as compelling to others as they are to me, perhaps because words are inadequate (or my facility with words is inadquate) to explain the sheer spectacle and emotional power of any given dream.

And yet, from time to time I'll try, because they can be that special. But perhaps dreams are meant only for the dreamer.
Posted by Earl J. Woods at 10:33 pm 3 comments:

Email ThisBlogThis!Share to TwitterShare to FacebookShare to Pinterest
Labels: dreams

Earl and Sean vs. the Flying Saucers 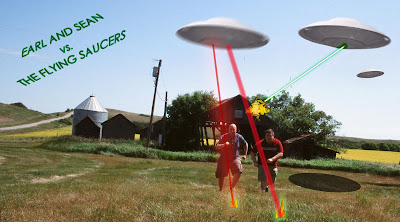 Boldly by day they came, the saucer-slayers in their sinister ships of silvery steel!

They ravaged the countryside, burned the cities with deadly beams of unstoppable terror!

Greatest weapons of super-science helpless before the awesome might of the menace from beyond!

EARTH VS. THE FLYING SAUCERS

EARL VS. THE FLYING SAUCERS

And now, the greatest shock-spectacle of the silver screen!

SCENE ONE. A hot summer day in southern Manitoba. EARL and SEAN are visiting the abandoned farm of their grandparents.

SEAN: It sure is neat to see this place at last.

EARL: Yes, these decaying buildings are a solemn reminder of the fact that one day, death comes to claim us all!

SEAN: Boy, you're gloomy today! Try to enjoy the heat of the sun on your face, the smell of grain, and the memories of a simpler time.

EARL (chuckling): Perhaps you're right. It's just that all this secretive talk about the X-74 project is starting to wear on my nerves.

SEAN: X-74, eh? Isn't that the secret plan to set up a defence against the so-called green men from outer space you government types are so concerned about?

EARL: Apparently it's not so secret as we would have liked! Yes, X-74 involves the fused transmission of microwaves, interspliced into a beam lattice that -

(a low humming can be heard from offscreen)

EARL: I don't hear anything - wait. It's coming from over there.

SUDDENLY, three flying saucers zoom over the farm, shooting ray-beams into the barn and surrounding buildings, which EXPLODE INTO FLAMES!

EARL: The farmhouse basement! It's our only chance!

EARL and SEAN leap into the front door of the farmhouse and down the stairs into the cellar. The flying saucers fire their beams into the house, which EXPLODES in fury!

SMOKE BILLOWS FROM THE DESTROYED FARMHOUSE. BUT AFTER A COUPLE OF BEATS, HANDS EMERGE FROM THE WRECKAGE, AND TWO BODIES EMERGE, COVERED IN SOOT: EARL AND SEAN.

SEAN: That was close!

EARL: We've got to warn headquarters! But my televisor screen was damaged in the blast!

SEAN: If I knew about X-74, it's a cinch those moon men know about it, too! And they're on their way to destroy it before it becomes a threat to their empire!

CUT TO THE INTERIOR OF THE LEAD FLYING SAUCER. VOLUPTUA AND HER SECOND IN COMMAND, MOONTOR, ARE OBSERVING THE MAIN VIEWSCREEN OF THEIR CONTROL SAUCER, LOOKING OUT AT THE DEVESTATION BELOW THEM.

MOONTOR: With those fools Earl and Sean out of the way, our conquest of this pathetic planet is all but assured!

VOLUPTUA: Fool! Such brazen overconfidence has no place aboard my royal flagship!

MOONTOR: A thousand pardons, my mistress!

VOLUPTUA: Fool! Such simpering obsequiousness hs no place aboard my royal flagship!

A BEAT AS MOONTOR TRIES TO FORMULATE A RESPONSE. FORTUNATELY, VOLUPTUA'S ATTENTION IS DISTRACTED BY A FLASHING ALERT-BEEPER ABOVE THE VIEWSCREEN.

A CREWMAN PRESSES THE APPROPRIATE BUTTON. A FLASH OF LIGHT FLARES ON THE UNDERSIDE OF THE SAUCER, THEN TRANSFORMS INTO A COHERENT BEAM OF DEADLY ENERGY, WHICH LASHES OUT TO VAPORIZE THE BUNKER.

VOLUPTA: Fool! I don't need yes-men to point out the obvious! Send down a landing party to survey the wreckage! Ensure that the X-74 is destroyed! And kill all survivors!

EARL AND SEAN FLAG DOWN A PASSING SEDAN, DRIVEN BY A YOUNG BLONDE WOMAN. THEY ENTER THE CAR.

SYLVIA (TO EARL): Where to, handsome?

EARL (sternly): No time for flirting, honey! We need to get to the abandoned airfield at Virden, and fast!

SEAN: She's got you there, brother.

THE CAR SCREECHES OFF INTO THE DISTANCE, HEADING FOR THE LAB. 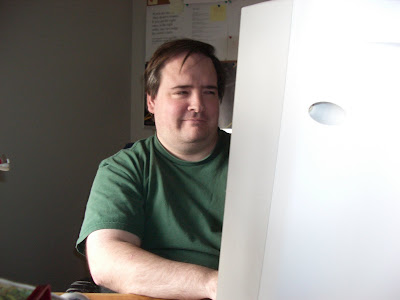 I prefer mass-market paperbacks because they're cheap (relatively), portable and easy to handle. They're also small, and when you have thousands of books, shelf space is always at a premium.

I really hate it when a publisher switches from mass-market paperback to trade paperback format in the middle of a series of books. Years ago, Harry Turtledove's alternate history of the American Civil war followed the normal publishing pattern: hardcover first, followed by a mass-market paperback about a year later. But then, midway through the series, the books started appearing as trades. No problem, I thought, I guess it's an intermediary stage; they'll keep this on the market for a while, then release the mass-market paperback.

Almost ten years later, I'm still waiting. The series is finished, and the three or four books I need remain stubbornly fixed as trades. I have only two choices: keep waiting, or buy the trade paperbacks, which will look goofy on my shelves next to all the smaller books before them. I suppose I should just buy the trades; I'm sure the mass-market editions will appear on store shelves as soon as I do so, just out of spite.

Last night I dreamed that Sylvia and I had teamed up with Captain America to fight a super-villain by moonlight on an old abandoned farm. The villain was a humanoid blob of glowing yellow light that shot firebolts; I don't think I had any super-powers, I was more of a Rick Jones-style sidekick.

Captain America was having a tough time against this guy, barely able to deflect the firebolts with his shield. I flailed my arms around uselessly. Sylvia, however, used her telekinesis to grab hold of a hay bale and slam it down on top of the villain, leaving him trapped cartoonishly inside the centre of the bale with only his head visible.

I whooped in triumph and shouted, "Hey, Captain America, she really BALED us out! Get it? Because she used a hay bale..."

The last image of the dream was Captain America's annoyed glare, gazing straight at me.
Posted by Earl J. Woods at 6:32 pm 1 comment:

Condo for Sale - Huge Stacks of Books Not Included

Sylvia and I are looking for a bigger place to live, chiefly because I have accumulated too many books. If anyone's interested in a very nice two and a half bedroom, two bathroom apartment-style condo, let us know.
Posted by Earl J. Woods at 2:49 pm 2 comments: