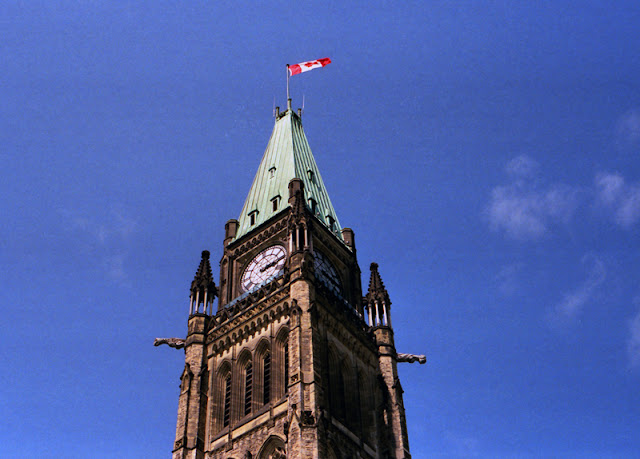 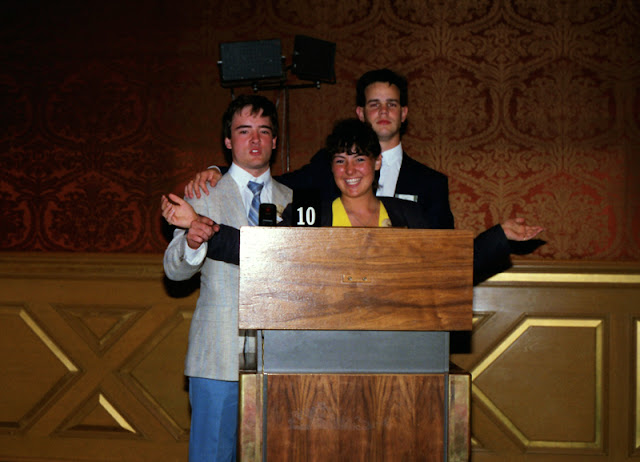 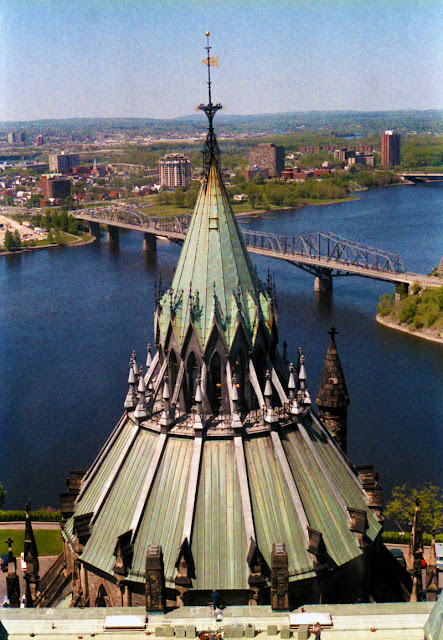 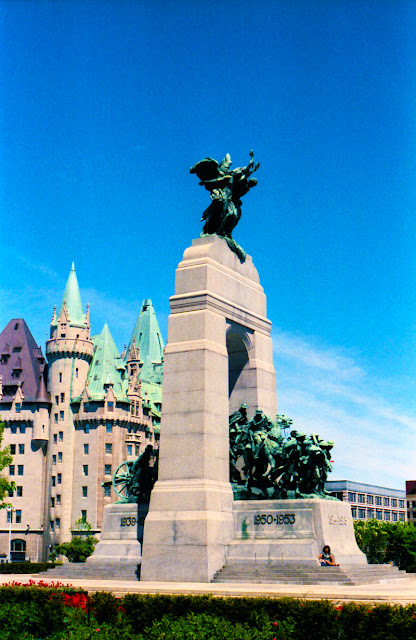 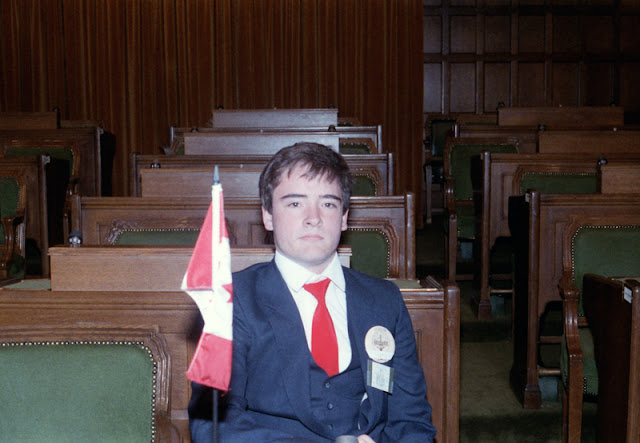 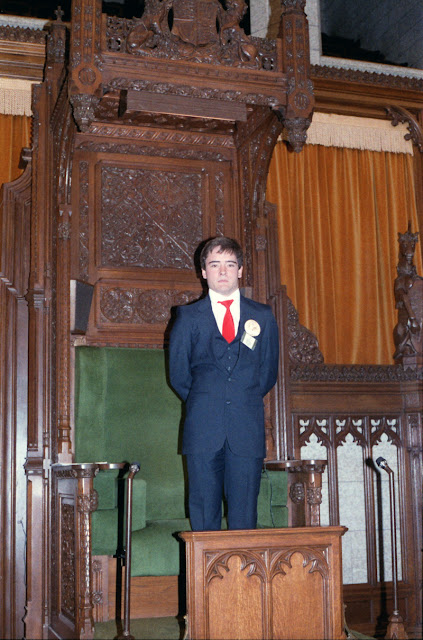 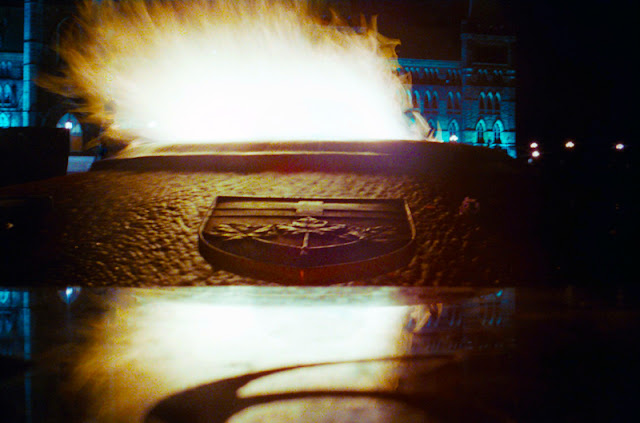 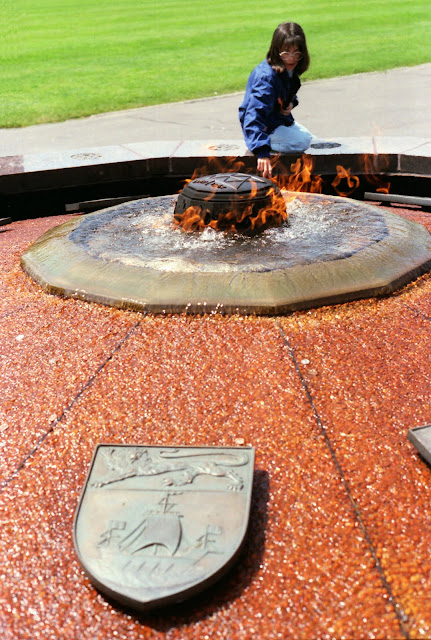 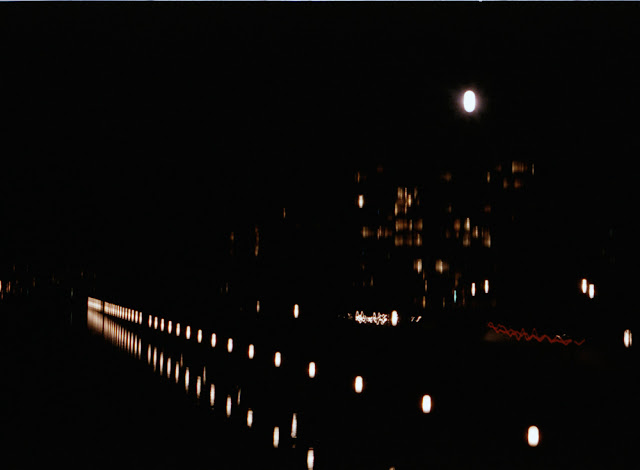 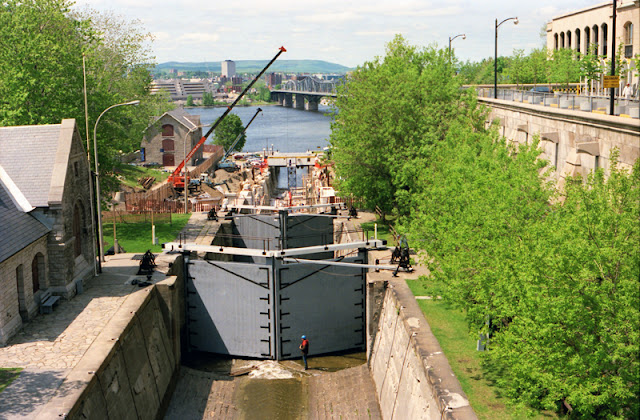 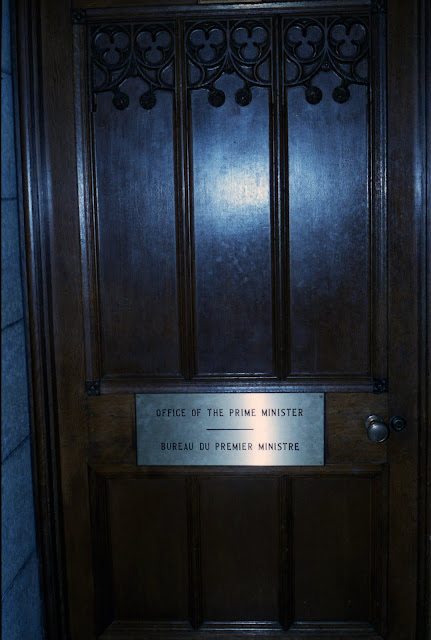 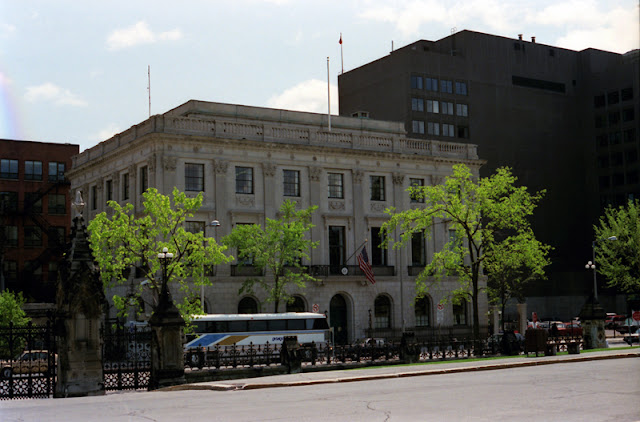 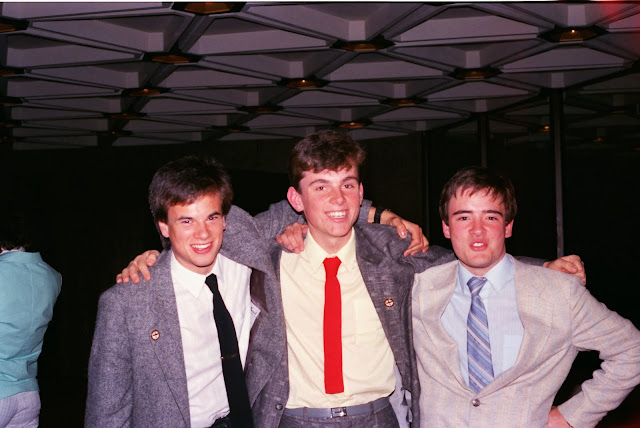 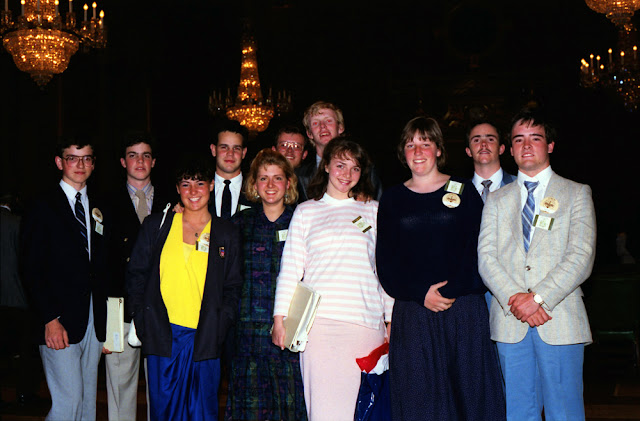 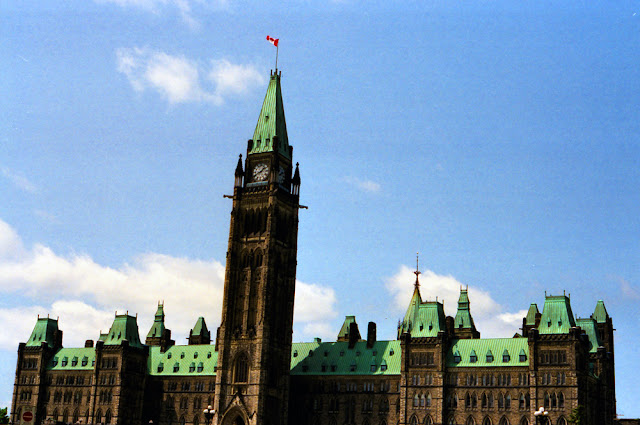 The house on the hill. On Monday, we get to choose who works there. Remember to vote!
Posted by Earl J. Woods at 8:22 pm No comments:

Mugging for the Camera 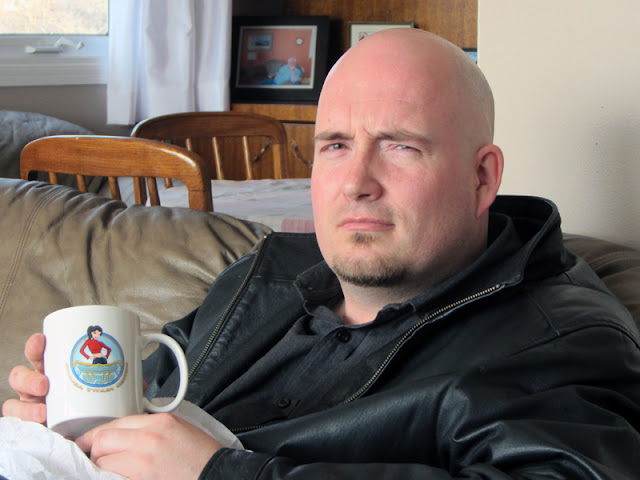 When I accompanied Sylvia to Timmins, I knew that I had to bring back a souvenir for Sean - especially since we would be in Ontario during his birthday. So I brought him an official Shania Twain coffee mug, straight from the Shania Twain Centre itself. He looks as though he loves it!
Posted by Earl J. Woods at 10:07 pm 2 comments:

Internet access has become indispensable for practically every Canadian, regardless of age. Most of us have gotten used to playing a flat fee every month for that access; we download what we want, pay our bill, and forget about it.

In Alberta, both Shaw and Telus actually have caps on your broadband usage; technically, if you go over the monthly limit, they can charge you extra. So far, they haven't been exercising this power. But if the big internet service providers get their way, that could all change right after the election.

Despite their massive profits, the big ISPs want to implement usage-based billing, or UBB. The idea is that the more you download, the more you pay, which sounds fair on the surface but is really just a way of gouging customers for more money. Do you like receiving photos or videos of your grandchildren via email or on YouTube? Have you signed up for NetFlix? Do you send and receive large files for your business? Do you enjoy reading (or creating!) blogs with lots of photos and videos? Prepare to pay more - lots more - every month.

However, there is a way to stop this from happening: vote ABC. That is, Anyone But Conservative. Most of the major federal parties have Internet-friendly policies that would, to greater and lesser degrees, prevent ISPs from moving to UBB. Only the Conservatives have refused to take a position on this critical issue. Frankly, that makes me suspicious of their motives.

To be fair, when the big ISPs tried to push UBB on Canadians a couple of months ago, the Conservatives forced the CRTC to reconsider its decision to allow usage-based billing. But that's just good politics on the cusp of an election. By refusing to state their position on the future of UBB, the Tories are (or should be) leading Canadians to wonder what will happen after the election - when it will be too late to punish a government that allows UBB.

The Internet has become a critical medium for commerce, culture, diplomacy, science, history - it touches practically every life in the developed world. Canada's government should be pushing for cheaper, faster access. Instead, we're lagging well behind other developed nations in speed, price and ISP transparency.If we want to remain competitive, if we want everyone to have equal access to the Internet regardless of income, then we need to take this mantra to heart:

ABC or UBB. The Liberal and NDP positions (scroll down) on the Internet's future are particularly strong.
Posted by Earl J. Woods at 8:46 pm 2 comments:

All the News That's Fit to Fake

Today the Sun News Network revealed that Patrick Muttart, former Deputy Chief of Staff to Prime Minister Harper and until today a top Tory campaign operative, tried to plant a fake news story about Michael Ignatieff to SNN. Essentially, Muttart tried to pass off a photo of a gun-slinging commando as Ignatieff to imply that the Liberal leader was machine-gung-ho about the US invasion of Iraq.

To their credit and my surprise, Sun Media immediately ratted out the Tories. While I'm not a fan of Ignatieff's initially hawkish position on Iraq, he doesn't deserve this kind of desperate smear attack, nor should the voting public put up with blatant lies of this magnitude.

Naturally Muttart has fallen on his sword and returned to Chicago, while Stephen Harper, I'm sure, will take no responsibility for this farce. But he can't escape responsibility for choosing his friends poorly. The Prime Minister has surrounded himself with operatives of dubious character. What does that say about his own?
Posted by Earl J. Woods at 7:00 pm No comments:

I'm sorry to say that Sylvia's grandmother passed away on Sunday morning. In the hopes that her family will find solace in each other, I present the best of the rest of the photographs I shot when Sylvia and I visited Timmins.

The Girl Who Kicked the Student's Desk

There was an unhappy girl in my class sometime during junior high; I'm going to call her Sarah for the purposes of this story. I don't remember if it was grade seven, eight or nine, but I do remember that most of the other kids didn't like her. At the time people thought she was plain, though now I realize that she was actually quite pretty; she probably grew up to be a knockout, if there's any justice in the universe. She had long, dark, greasy hair and wore drab clothing. She was quiet and sullen. Some days she smelled a little funky. Many of the other kids bullied her. I ignored her, for the most part; I didn't know her well and reaching out wasn't terribly appealing, given her disposition. And to be honest, making friends with her would have had social consequences for me; junior high cliques are unforgiving, and when you're not part of the popular crowd already, you quickly learn that you don't do anything to jeopardize your precarious status.

Sarah sat behind me in Language Arts class. One day, she started kicking my desk during a lecture. I tried to ignore it, but she kept at it for several minutes, until finally I spun around in my desk and shouted "Will you please stop that?"

The teacher immediately sent her to the principal's office, and as she walked past my desk I could see her starting to cry.

Technically, we should both have gotten in trouble - her for instigating the disruption, me for talking out of turn in class. But I was one of the top students in the school and liked by the teachers. She had no such insulation. I immediately felt like a first-class heel. I could have tried to quietly signal her to stop, I could have ignored her, I could have waited until after class to ask her "Hey, what did you want in there?" Instead, I lost my temper and got her in trouble when what she probably needed was a friend.

If life were an episode of Degrassi, I would have approached her in the hall later on to apologize. We would have become friends. But in truth, my memory of Sarah ends with the look on her face as she resigned herself to a scolding. I don't even remember if we went to the same high school.

I hope Sarah had an easier time in high school. I hope that she's happy and healthy and enjoying a wonderful life. And if she ever reads this, I hope she'll accept an apology that's over thirty years overdue.
Posted by Earl J. Woods at 6:36 pm No comments:

At the Gray Farm 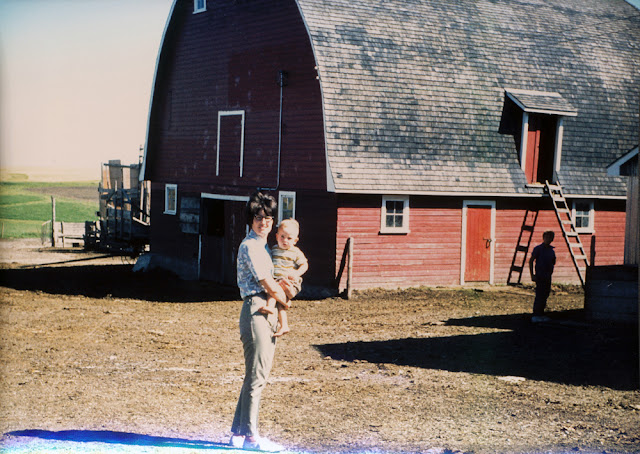 Courtesy of my Aunt Jean, another snapshot from the past I've never seen before: my mother and I at the Gray farm in 1970, with my cousin David Newton lurking in the shadows at right.
Posted by Earl J. Woods at 1:28 pm No comments:

If They Made Movies Just for Me...

...there would be an action movie in which the hero/ine and his/her sidekick would be infiltrating a secret base disguised as a jam factory. They'd be creeping along a catwalk above a vat of strawberry jam, but then the catwalk would collapse, dumping them into the vat. The protagonists would be thoroughly stuck in the thick red goo, and the sidekick would cry

But they don't make movies just for me. Well, except for Sky Captain and the World of Tomorrow.
Posted by Earl J. Woods at 10:04 am No comments:

The Madness of Hector Hammond 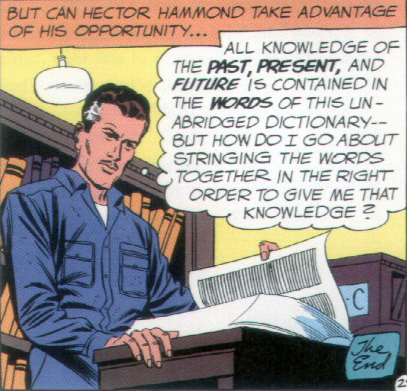 When I first read this panel, Hector Hammond's idea seemed like sheer madness. Even if you could somehow figure out how to put all the words in the right order to predict the future, what about words coined in the future, such as "Internet?" Oh, wait...each individual letter exists as its own entry in any dictionary, so "stringing the words together in the right order" would include sentences like "In 1994 the Oxford Dictionary will add a new word spelled with the letters I, n, t, e, r, n, e, t. The Internet is a series of computer networks..." etc. Wow! All of a sudden this plan doesn't seem to crazy after all.
Posted by Earl J. Woods at 8:21 pm No comments: 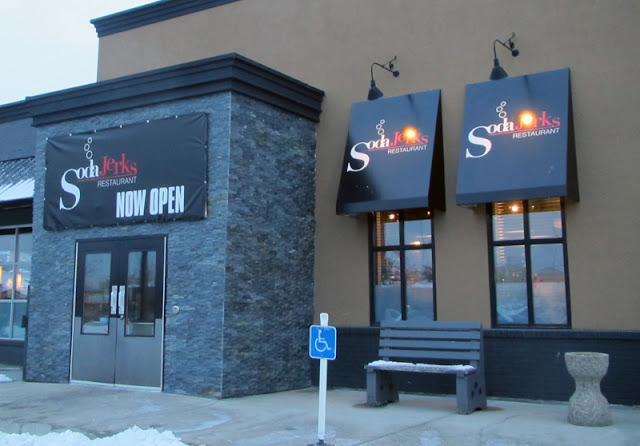 Soda Jerks opened up in west Edmonton a few weeks back. This location has seen a few restaurants come and go over the years, but based on my experiences thus far, I hope Soda Jerks sticks around. It's an unpretentious, fun little restaurant that serves excellent burgers and fries with a smile on the side.

Real soda jerks vanished long ago and are remembered today only by those who grew up in the 50s or who have absorbed popular culture depicting the era. For the uninitiated, the soda jerk was the person responsible for the soda fountain, mixing pops and floats.

There is no soda jerk at Soda Jerks, but they do offer a multitude of soda pop flavours, from the common to the obscure. I indulged in a Stewart's Black Cherry cola while I waited for my meal, a sandwich from the Build Your Own menu. I selected grilled chicken on sourdough bread with chipotle aioli, cheddar, tomatoes, iceberg lettuce, caramelized onions, bacon and guacamole, with a side of fries.

Service at Soda Jerks seems a little on the slow side, but the ambiance and the friendly servers help the time pass painlessly. And when the food arrives, the wait makes it all worth it. My sandwich was succulent, with fresh ingredients that burst across my palate. The fries were just the right temperature and texture, hand-cut with the skins on. Perfect. When I came back for another try with Sylvia, she ordered the chicken quesadilla and pronounced it "excellent." I didn't have the nerve to try their most intriguing appetizer, the deep fried pickle slices. Perhaps next time.

Price and portion size are well balanced. If you crave a juicy hamburger or wish to indulge your creative side, drop in, try an old-fashioned soda and enjoy a pseudo-retro dining experience that will leave your stomach full and your wallet only slightly empty.
Posted by Earl J. Woods at 6:26 pm No comments: