Finished and posted another movie, the first adventure of the Vixens of V.I.O.L.E.N.C.E. (Voluptuous Individuals Of Libidinous Extraction Now Combatting Evil). (Although I screwed up the acronym in the film, darn it.)

UPDATE: The Movies Online has been shut down and the film is no longer available.
Posted by Earl J. Woods at 3:22 am 6 comments:

Why Hast He Forsaken Thee?

If you've been following my brother Sean's blog, you already know that he stuck his finger into a live electrical outlet and wound up shocking himself. Not since I attempted to pull a roast out of a searing hot oven with my bare hands has a member of Woods Bros. done something so silly, but what I really found amusing was Sean's later comment that "By that point, not even God himself could have stopped me from sticking my finger in that socket."

It made me wonder: what was keeping God so busy that he couldn't prevent one foolish human from sticking his finger in a live plugin?

Maybe he was caught up at Cain's parole hearing. Maybe he was in the bathroom. Maybe god is omniscient, but not omnipotent, aware of Sean's problem but powerless to stop it. Or maybe he's omnipotent but not omniscient, perfectly capable of preventing Sean from shocking himself, but unaware of the predicament. Maybe god has a perverse sense of humour and enjoys watching people shock themselves. Maybe God himself was the electrical outlet, and wanted to personally punish Sean for past sins. Maybe God wanted to give Sean super powers, but wasn't sure if Sean would use them for good, or for Awesome and so changed his mind at the last second.

Things Man Was Not Meant to Know.

Earl Goes to the Movies

I picked up the new game The Movies a few days ago, and I've finally put something together I'm willing to post online. It's called Chaucer and the Saucer, and it asks the ages-old question, "what would happen if English writer Geoffrey Chaucer were kidnapped by aliens?"

Check it out on The Movies webpage at this address.

UPDATE: The Movies Online has been shut down, and the films are no longer available.
Posted by Earl J. Woods at 9:26 pm 9 comments:

The Fickle Finger of Fame

Yesterday I had an errand to run downtown and I wound up getting captured on film by a photographer for the Edmonton Sun. I was feeding coins into a parking meter without realizing that a large billboard of Darth Vader was looming behind me, as if making sure I was contributing sufficient change.

The photo ran in today's Sun. Obivously I can't post it here, but it's an amusing enough shot if you care enough to pick up the tabloid today.

In lieu of that photograph, here's one I shot while fooling around yesterday. 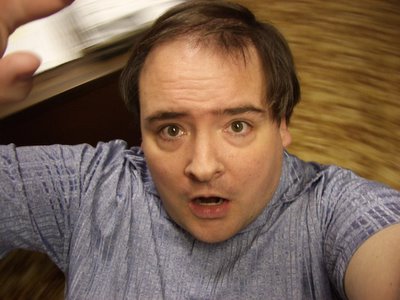 UPDATED!
See the photo online at the Edmonton Sun. Thanks to Susan Neumann for bringing this to my attention.
Posted by Earl J. Woods at 3:42 pm 12 comments: