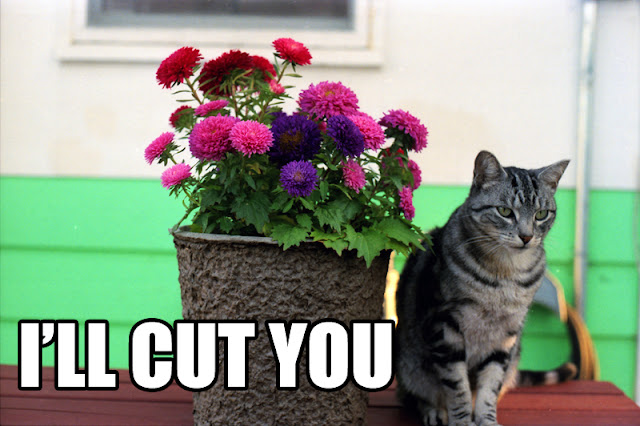 The Internet thrives on photos of cats, and yet I don't believe I've yet posted a single feline. Here's Alex, Sean's first cat, circa 1991. Shortly after acquiring kitten-aged Alex from the family of a high school classmate, my friend Jeff Pitts came over and introduced himself.

"Hello, kitty!" he said, leaning over to pet the harmless-seeming animal. Temperamental Alex responded by carving three deep slashes into Jeff's cheek, who yowled in a manner familiar to anyone who's known luckless Jeff for more than six months. Mom ran for the hydrogen peroxide and Jeff was none the worse for wear. When Steve Fitzpatrick visited a little later, Alex hid out of sight for a time. Steve and I talked in the living room, Steve on one couch, me on another, when suddenly Alex leaped across the room and pinned Steve's arm to the wall for an instant or two before scampering off again.

Alex calmed down as he aged, but not without leaving a few scratches in other people, myself included. He also enjoyed exploring the nooks and crannies of the basement ceiling, and often Sean and I would hear him walking around up there. Once he got into a fluorescent light fixture, and the panel wasn't strong enough to bear his weight; it shattered, raining shards of translucent plastic down onto Sean, who was working at the computer. Alex himself landed (appropriately cat-like) heavily upon Sean's startled shoulders before zipping off to safety.

Despite (or because of) my allergies and acknowledged general disdain for pets, Alex seemed somewhat sadistically fond of me and we often played hockey with plastic bottle caps. He also enjoyed rubbing cat fur all over me, which caused no end of sneezing, skin irritation and watery eyes. Aggravating cat.
Posted by Earl J. Woods at 7:24 pm