Departure of the Sourdough Sled Team 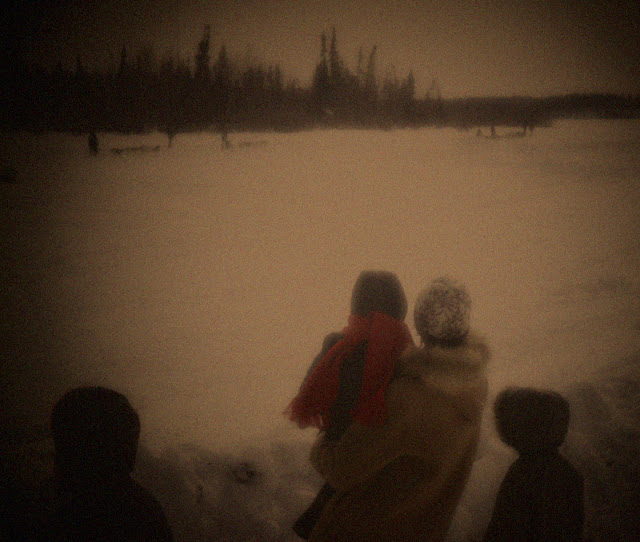 While this photo was actually shot in the 1970s in northern Manitoba, I thought with a little manipulation it could appear as though it were taken a hundred years earlier, during the Yukon gold rush. In reality, these 20th-century folk are watching a modern-day sled dog race; in my imagination, they're watching their loved ones make a mad break for fortune and glory, searching for gold at the edge of what was then the final frontier. A little film grain, lighting effects and sepia tinting help sell the illusion - I hope!
Posted by Earl J. Woods at 8:28 pm

The acrylic fur winter clothing makes it look 1970's. If you cropped the foreground people out, your image would look a lot like some of the deguerrotypes of the Gold Rush I have seen.

Deguerrotypes are sharp images, but exposure length and camera shake are factors that create blur. During the Gold Rush, I believe there were deguerrotypes that could be exposed in as little as two seconds, but that would have to be in full sunlight. Probably a shot like that would require an exposure of 10-30 seconds, guaranteeing blurriness for humans if they were not instructed to stand perfectly still. Plus in the cold, the lens might fog or not focus at a distance. Probably, the cold also affected image development.

Daguerrotypes are monochrome, so the coloured scarf especially seems out of character. If I were to finish this, after the crop I would convert the image to a duotone and pick one or two sepias to fix the colours. I would also go into Curves and make a small boost to the dark end of the graph to make the dark colours look more washed-out, to simulate the retricted gamut of a degerrotype. Finally, I would add maybe 2 pixels of motion blur to make the grain look less digital and more organic, like the camera may have moved just a skosh.

I can only imagine what it could have been like to manpack a camera obscura into the Yukon wilderness in the 1800's. They did a lot of crazy things for that gold, but the riches came from fleecing the prospectors. It would make a hell of a short story to tell the Gold Rush from the point of view of a photographer.